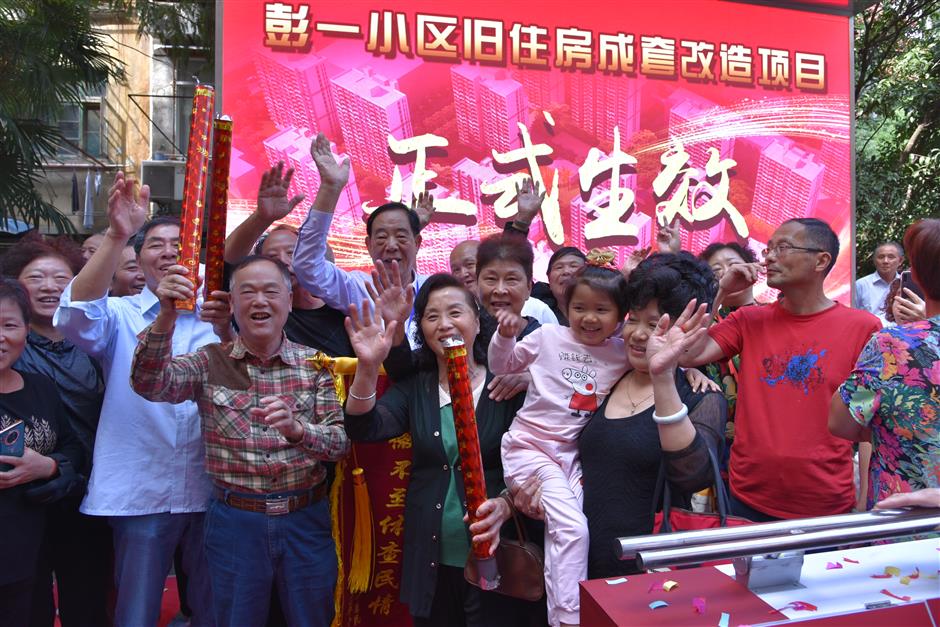 Pengyi residents celebrate as an renovation deal is agreed on their community. 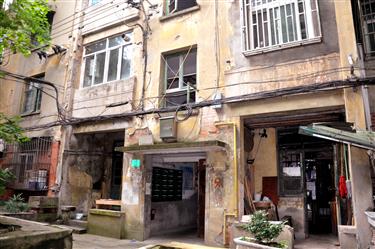 Once again, Zhao Qiming feels proud to be living in the Pengyi residential complex.

When it was built in 1958, Pengyi, part of the city’s renowned workers’ community of Pengpu Xincun, initially housed model workers who were thought to make great contributions to the country’s national industries.

“At that time, it was a great honor to live in Pengyi,” said the 68-year-old resident, who moved to Pengyi at the age of 6. It was a model neighborhood with a design based on the architectural styles of the former Soviet Union; most were three-bedroom units. To adapt to local conditions, one unit was occupied by two or three families, resulting in shared toilets and kitchens.

However, Pengyi’s living conditions were considered better than those where people lived in cramped shikumen (stone-gate) buildings. Moreover, Pengyi had beautiful gardens.

The residential complex had a reception room to receive foreign guests, and more than 600 foreign groups from over 40 countries visited the neighborhood, which decades ago served as Shanghai’s window to the world.

“Back then, the environment here was so good,” Zhao said. “Here I went to kindergarten, primary school and middle school. I could find everything here.”

In subsequent years, however, the original Pengyi complex expanded with shoddy construction and buildings riddled with safety hazards. Also, as its population swelled, the model neighborhood began to deteriorate, at which point Zhao felt a sense of loss and grief.

“Over the years, the neighborhood fell into a state of disrepair,” he said. “Walls cracked and turned black. Sometimes more than 10 people lined up to use the toilet, just like public toilets at tourist attractions. On rainy days, we had to use umbrellas because of leaky ceilings. Even when we took a shower, we had to put an umbrella above our heads.”

His neighbor Wang Liyuan concurs. Even after living in Pengyi for nearly 20 years, she could never get used to the shared toilet and kitchen.

“I had to walk through the corridor and line up to use the toilet, so I kept a chamber pot at home,” she said. “On rainy days, I felt like the building was flooded. Water came from everywhere, and there were so many things piled up in public areas.”

Their dreams of living somewhere better will soon come true. This month, more than 99 percent of the 2,110 families signed an agreement to renovate Pengyi.

In the next four to five years, 40 old buildings will be demolished and replaced by 17 high-rises. Shared toilets and kitchens will be a thing of the past. Residents will no longer have to climb stairs, and living spaces will be larger.

What’s more, there will be an underground parking lot with more than 1,700 spaces, and almost 30,000 square meters of cultural, sports and service facilities — including badminton courts, a fitness club, music theater, community canteen, medical facility and childcare center.

“I’m so looking forward to moving back in four years,” Wang said.

“We’ve witnessed Pengyi’s past and present, and we will experience its future,” Zhao said. “I’m so glad.”