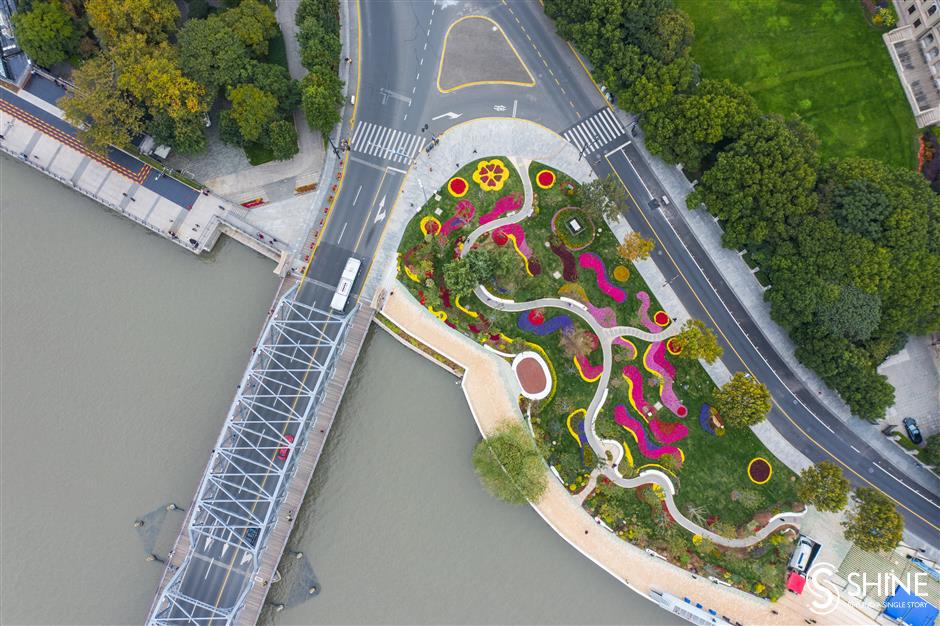 The target is 200 kilometers of new greenway every year, the Shanghai Greenery and Public Sanitation Bureau said.

Greenways in the city, now totaling 1,093 kilometers, are paths for leisure and exercise amidst trees, flowers, water and other natural resources. They include paths in gardens and forests, as well as along rivers and roads. 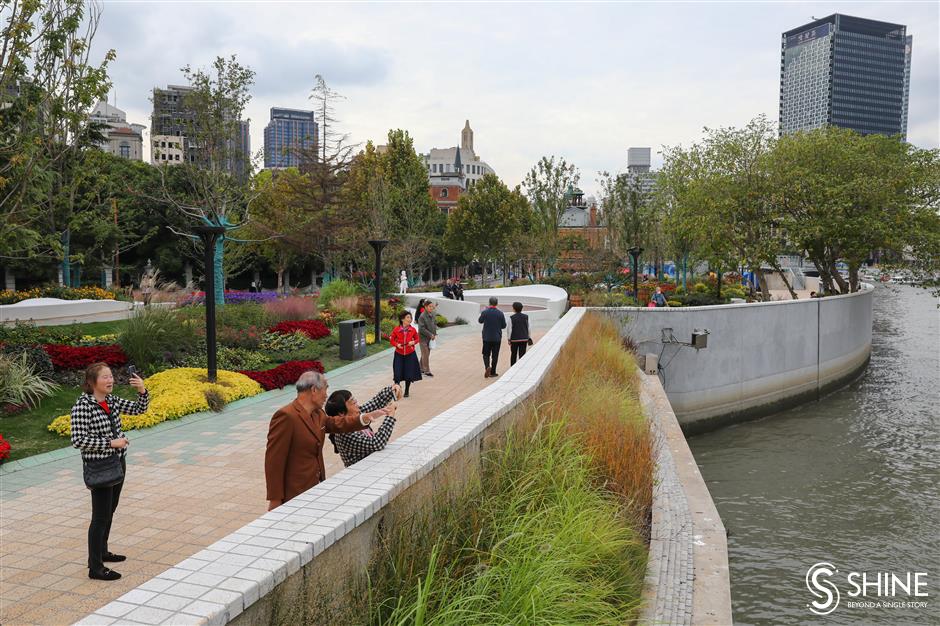 Visitors take photographs of the view across the river.

The variety of plant species introduced add a splash of color to the city's landscape and brightens people's lives, the bureau said.

The cherry blossom greenway on Guijiang Road in Xuhui District, plum flower greenway on Laohumin Road and near Xinzhuang overpass in Minhang District, and the Chinese rose flower wall greenway along Pengyuepu, a tributary of the Huangpu River, are some of the city’s most representative greenways, the bureau said.

The riverfront Huangpu River greenway, known as the “No. 1 municipal greenway,” stretching 8.3 kilometers through Huangpu District with walking, jogging and cycling tracks, has become a popular getaway for residents and tourists. 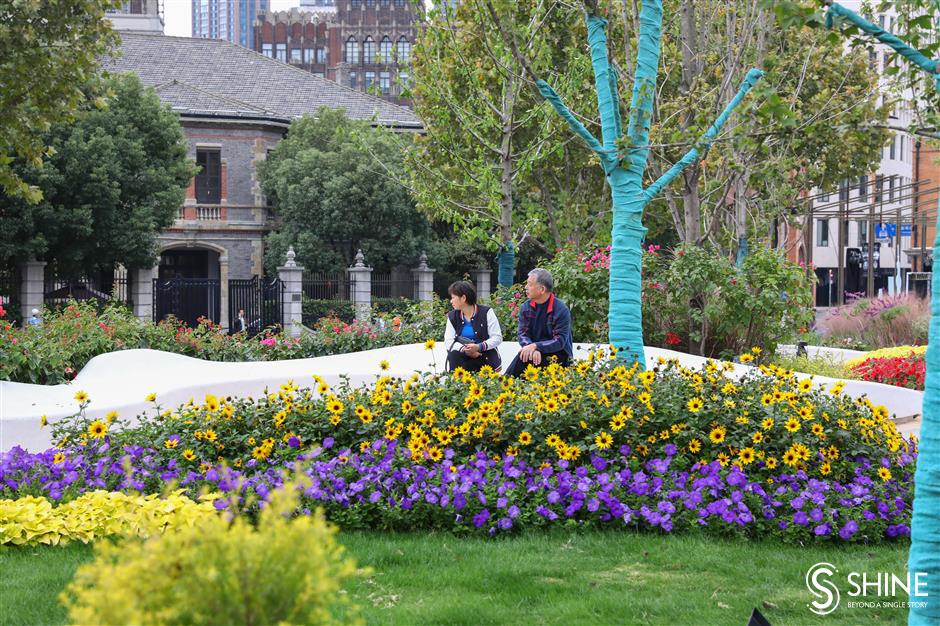 A couple take a moment to sit and admire the flowers.

The Puxi section greenway of Outer Ring Road and the downtown part of Suzhou Creek greenway will be completed by the end of this year, the bureau said.

The Huangpu District section of the Suzhou Creek greenway stretches over 1,200 meters.

The colorful landscape near the Waibaidu Bridge attracts photographers and visitors taking exercise or simply immersing themselves in a little oasis of urban tranquility.

The greenway’s bricks are decorated with colorful glass and the mosaic style in and old-fashioned Shanghai flavor.

"Because the greenway sits along the Suzhou Creek and Huangpu River, its design inspiration is drawn from water," said Zhu Xiaojun, director of the planning and construction department of the Huangpu District Greenery Management Station.

"The creek and the river carried important shipping transportation function in the past, thus the greenway's design embodies these features," he said.

"The path is shaped like a wave and the benches are in the shape of oars,” said Zhu. 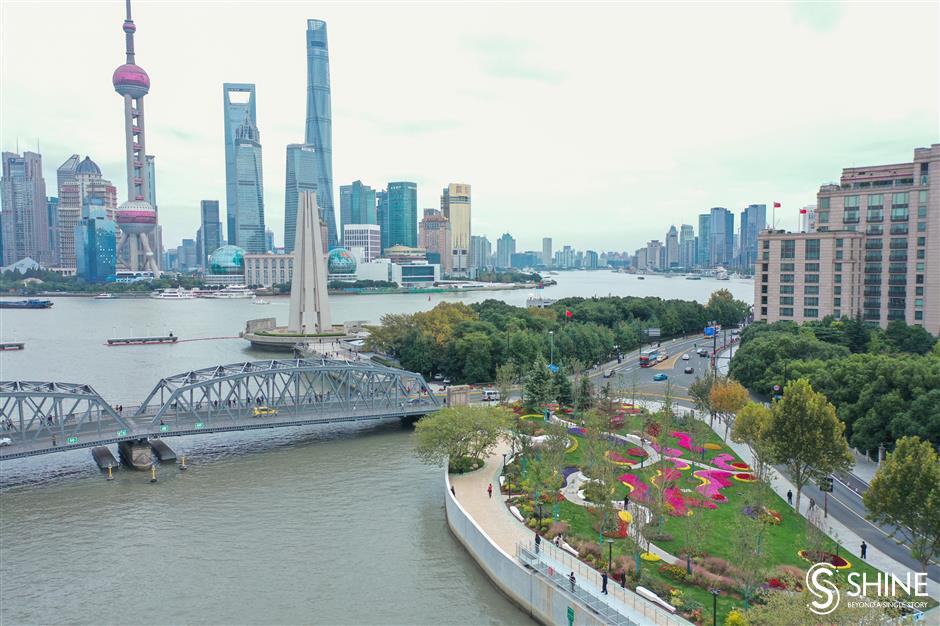 The colorful landscape near the Waibaidu Bridge attracts photographers and visitors taking exercise or enjoying a little oasis of urban tranquility.

Flower varieties including as hydrangeas, Chinese wisteria, irises, and cherry blossom lie along the greenway, and spruce up the area in purple, white, blue, yellow and pink.

The Suzhou Creek greenway and Huangpu River greenway are connected by a garden featuring maple trees.

"The designer, a senior Shanghainese, drew inspiration from the 'lover's wall' on the Bund," said Zhu. "Many Shanghainese whispered their love at the wall, a famous love spot at a time, when science and technology was not that developed, leaving limited entertainment choices for lovebirds."

The famous lover's wall was where sweethearts once used to stroll, hand in hand.

"A tulip landscape will be created on the greenway," said Zhu.

"The greenway is very eye-catching and the flowers are very beautiful," said city resident Wang Xiaohong. She was visiting the Bund with her family on Wednesday afternoon.

"I spotted the greenway from far away and wanted to take some photos here," she said. "The flowers enlighten my mood.”

Li Weixing, a retiree living near the greenway, said he liked taking a stroll there.

"In good weather, there is mild breeze and twittering birds and the greenway offers a rare oasis in the city's concrete jungle," he said. 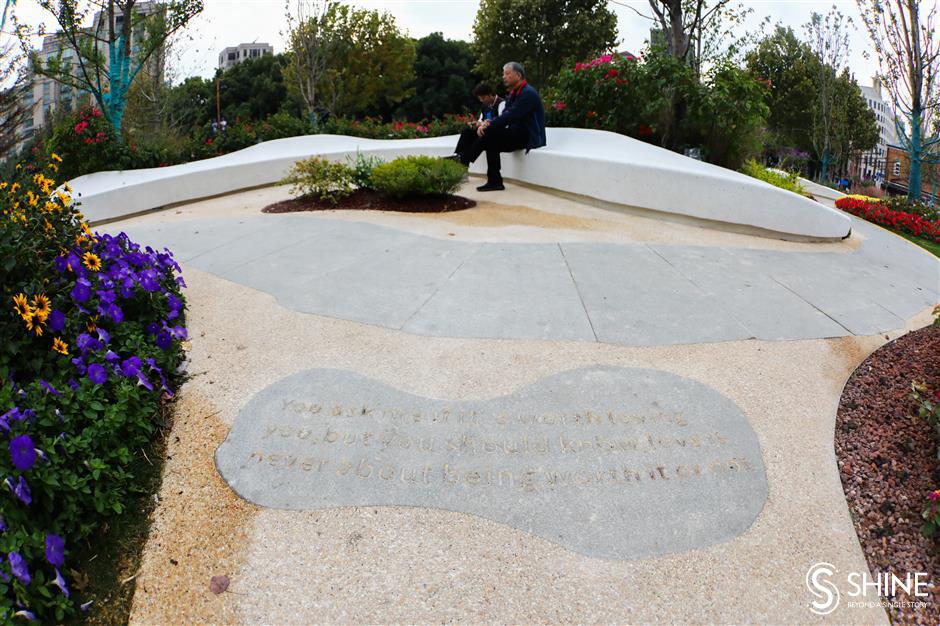 A greenway path featuring poems in English by Eileen Chang.