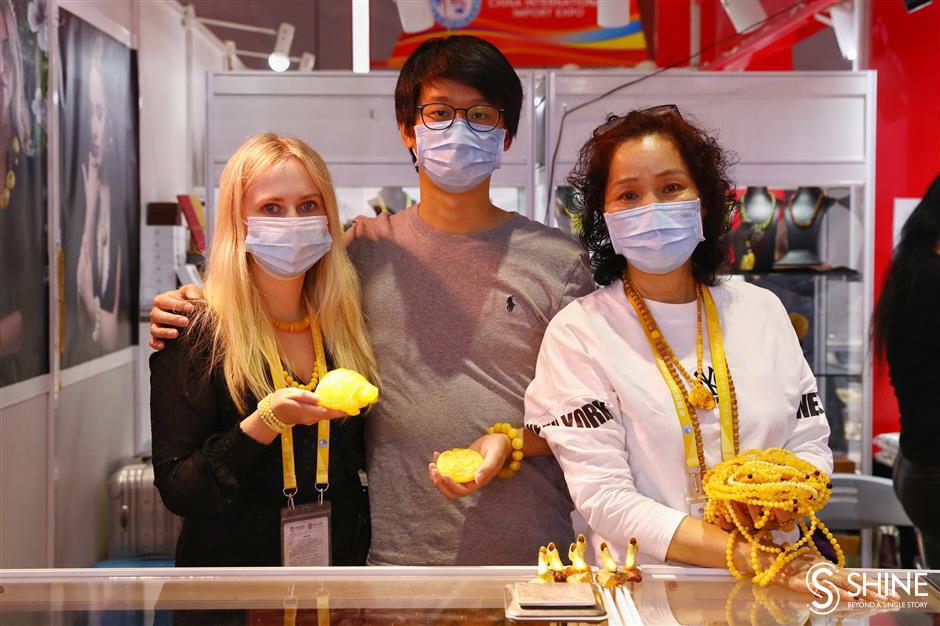 The family displays amber products of Poland at the import expo. 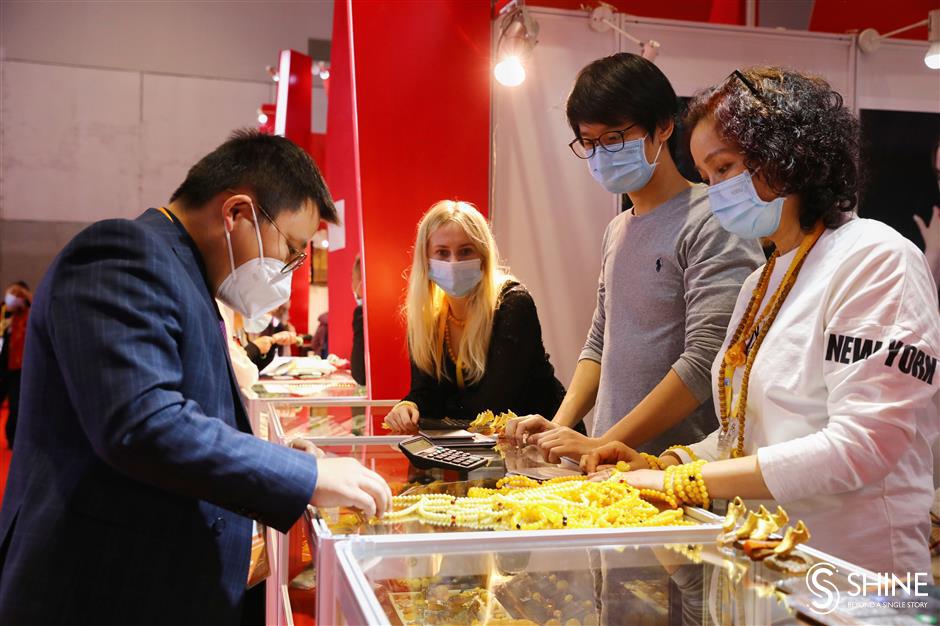 The family sells amber at the import expo.

Hu Junwei, a 33-year-old Shanghainese, never expected that he would attend the China International Import Expo one day with his mother and Polish wife, promoting Polish amber.

Standing at a booth in the consumer goods exhibition area, the trio is busy while enjoying a booming business. During the interview, they had several customers attracted by the beautiful amber and making orders.

The story dates back to nine years ago, when Hu was sent to Warsaw for a road construction project.

"I killed time by cyberchatting when I stayed there because life was boring," he said.

They vary in culture and background, but the magic connection started and they soon fell in love.

"I never expected I would marry a Polish woman one day," said Hu. "But love is magic."

"Shortly, he asked me whether I could be his girlfriend," said Pawlik alongside with a grin.

"We are many years together now although we still quarrel over trifling things, like who is more famous on Douyin (known overseas as TikTok)," joked Pawlik with a sweet smile.

"He is smart and very handsome," said Pawlik.

Pawlik's hometown is Gdansk, known for its amber.

The Pawlik family amber business has more than 90 years of history, as the family turns amber into various handmade products.

The Pawlik's father is the fourth-generation inheritor of the business.

Hu took a bottle of vodka to Pawlik's home and asked to marry her, winning the favor of his father-in-law for his impressive drinking capacity.

The father was concerned about the inheritance of the family business at that time, and so Hu's proposal came at the right time. Hu won the heart of the man with his own business skills.

"Chinese people have a very good mind for business, and they are very smart," said Pawlik.

Hu was integrated into the family soon, despite cultural differences.

He started introducing amber products to the China market via e-commerce platform, and he succeeded quickly.

The small family outfit was turned into an international trade business, which now has more than 40 workers.

They import amber materials from Poland and process them in China.

The unexpected COVID-19 epidemic cast a shadow over their business, however.

"The sales of our products rely on tourism, but the number of both international and domestic tourists decreased by 90 percent early this year in Gdansk," Hu said.

"However, the demand for amber products in China is still strong," said Hu.

They applied to be exhibitors at the expo about half a year ago.

"The expo gives us an opportunity to promote our products," said Hu.

"It's our first time to attend this expo," said Pawlik. "We heard a lot of nice words on the expo from our friends, so we decided to try."

"The world is in a different situation for business because of the virus but China is safe," she said.

"We come here especially for this expo, even though I needed to take a two-week quarantine," said Pawlik.

"We are thinking more of the China market," she said.

At the expo, Pawlik plays a role in promotion, and Hu is responsible for connecting with professional clients. His mother is good at bargaining.

"We develop new clients at the expo," said Pawlik.

Hu said they plan to attend the import expo next year.

"But we will need to apply early," he said.

"We applied in May this time, but it was still a little bit late and we failed to secure a good location," said Hu. "We will apply immediately when the event ends to secure a good spot for the next year."