Bridges across the Huangpu River record stories of human endeavor

A bird’s-eye view of Huangpu River’s source in Songjiang District shows the Yuanxie, Xietang and Hengliao rivers converging. The flowing river separates Songjiang into Punan and Pubei (areas to the south and north of the Huangpu River) and irrigates the land on both banks to the benefit of the people onshore. The residents, in turn, have witnessed its many changes over the years.

Building the Songpu Bridge over the Huangpu River’s Songjiang stretch turned a new leaf in the river’s history. Before that, the river had no bridges.

In June 1972, China’s State Council approved a Shanghai Petrochemical Co plan to build in neighboring Jinshan District. Jinshan is south of the river, so a bridge combining a highway and a railway became a necessity.

In March 1974, three design proposals were selected. The first proposal, suggesting a double-deck bridge with three piers and four openings, became the action plan in April that year. The railway bridge, one-way and with a steel girder spreading for 6 meters, would be on the lower deck while the highway bridge, two-way and 9 meters wide with 1.5-meter-wide pavements on both sides, would be on the upper deck.

On July 26, 1974, the first concrete tubular pile of the Songpu Bridge, then called the Huangpu River Bridge, was erected at Songjiang’s Desheng Harbor. Over the following two years the lower railway bridge and the upper highway bridge were completed in succession. The project took less than two years.

On June 29, 1976, performing artists from downtown Shanghai and 10 suburban counties arrived for the bridge’s opening ceremony. More than 300 floats passed the bridge in over three hours.

In 1977, the petrochemical company completed its sea dikes, construction of its factories, installation of facilities and a test run, and began its trial operation. By July 1981, the tax it submitted to the state government had surpassed its Phase One total investment, two years ahead of schedule. Songpu Bridge’s contribution to this should not be left unrecognized.

The bridge, after being temporarily renamed the Cheting Bridge from 1989 to 1995, changed its name to the current Songpu Bridge to share the same syllable with subsequent river crossings such as the Nanpu, Yangpu, Fengpu, Xupu, Lupu and Minpu bridges in other districts.

On September 11, 1975, Songpu Bridge’s railway deck that connected with the Jinshan Railway branch line opened to traffic. Since then, armed police officers from the military camp near the bridge have been guarding it.

“Vast farmland with a scarce population used to surround the bridge. Compared with downtown Shanghai, the winter temperature here was about 4 or 5 degrees Celsius lower, whereas in summer the railroad structure, after absorbing a huge amount of heat, had an extremely high surface temperature,” Chen Liuqiang, chief of the fifth squadron, recalled. “On summer nights hordes of mosquitoes gathered around the searchlight of a sentry post and attacked the soldiers in spite of the fact that they wore thick uniforms.”

In addition to safeguarding the trains that passed over the bridge, the soldiers also had to closely monitor activity around the bridge. Between 2005 and 2012 the squadron prevented more than 20 dangerous cases related to bridge and train safety, got rid of more than 40 potential safety hazards and captured more than 10 suspects who tried to steal or sabotage bridge and railway facilities.

A new railway bridge, replacing the function of the old Songpu railway deck, was built to the east of Songpu Bridge. Squadron member Zhou Tao and a comrade wrote their names on the remnants of the old bridge deck with white chalk.

“Our names in chalk will fade on the bridge, but our memory of the bridge will last forever,” the soldiers said.

An overall renovation of the bridge began on June 30, 2017, to improve its waterway transport capacity, landscape function, environment function and seismic resistance capacity.

At 10pm on August 29, 2020, the upper vehicular deck of Songpu Bridge reopened to traffic. 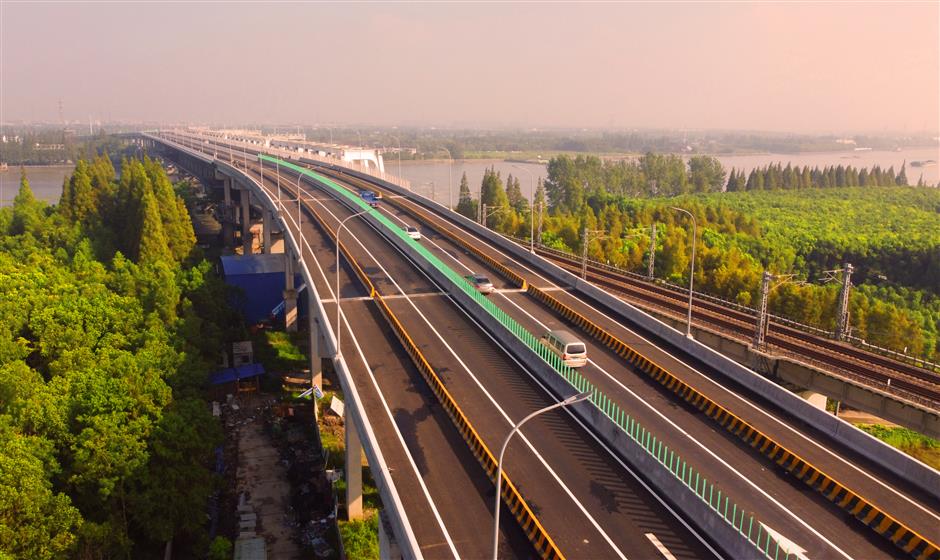 The Yuanxie River, a tributary of the upper Huangpu River stretch, converges with Beishi River at the northwest corner of Maogang Town. The waters therefore surround Nansan Village of Maogang Town on three sides.

“The village looks like an island,” said Li Yuansheng, who is in his 70s and has lived on the riverside since childhood. “Before the 1980s, there had been three ferry crossings in Nansan Village. And the waterway was the only passage to the outside world.”

“All the men in the village used to know how to run a boat. Those above the age of 50 now can tell you they can run a boat,” Li said.

In September 1980, construction of Nansan Bridge was completed. The bridge, crossing Beishi River in the east of Nansan Village, greatly facilitates travel to other places in the Punan area.

‘The mother of bridges’

On September 22 this year, the dismantling of Maogang Bridge, nicknamed “the mother of Huangpu River’s cable-stayed bridges,” began. The bridge, which opened to traffic on June 17, 1982, had served the people of Maogang Town for 38 years. Fragmented concrete and steel bars were exposed during the work, as if the bridge had opened its mouth to try to talk about its past.

Gao Guizhong, a Xinjian Village resident in Maogang Town and who took part in the bridge’s construction, was among the observers who watched the bridge being dismantled.

“I was told to attend a meeting on constructing the bridge one day in March in 1978,” said Gao, who at that time was a 27-year-old technician at the Maogang people’s commune.

“There were three plans on how to construct the bridge. The last one, the final settled one and the most challenging one, was to build a cable-stayed bridge with no piers in the center of Huangpu River,” Gao recalled.

A cable-stayed bridge has its column bases built on both sides of a river, the bases support the bridge towers and cables extending from the bases hold the bridge deck.

As the Huangpu River is more than 400 meters wide at that point, it was a long shot to build such a bridge across it considering the technologies at that time. The construction of Maogang Bridge across the upper reaches of Huangpu River would therefore help Shanghai to train a cable-stayed bridge design and construction team.

The bridge, when completed, had a major span that stretched around 200 meters. In the 1980s it was the longest cable-stayed bridge domestically and ranked eighth worldwide.

As the old Maogang Bridge was being dismantled due to disrepair and exposure to weathering, the northern section of a new Maogang Bridge, whose construction started in 2018, opened to traffic at 12am on August 30 this year. In September, the southern section of the new bridge also opened.

The overall construction of the new Maogang Bridge is estimated to be completed in August next year. Then the bridge will be part of a Level 1 highway with two-way six lanes, pavements and non-motor vehicle lanes, and its waterway transport capacity will be greatly improved. 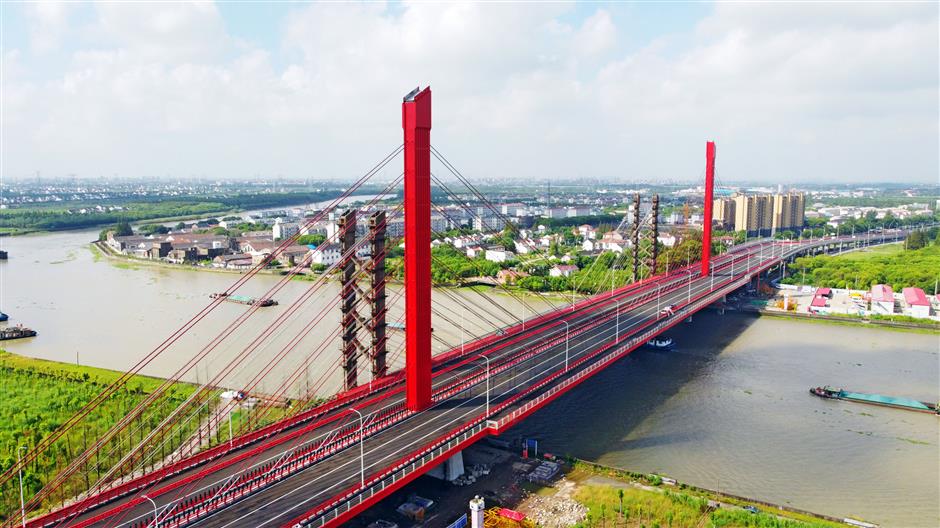 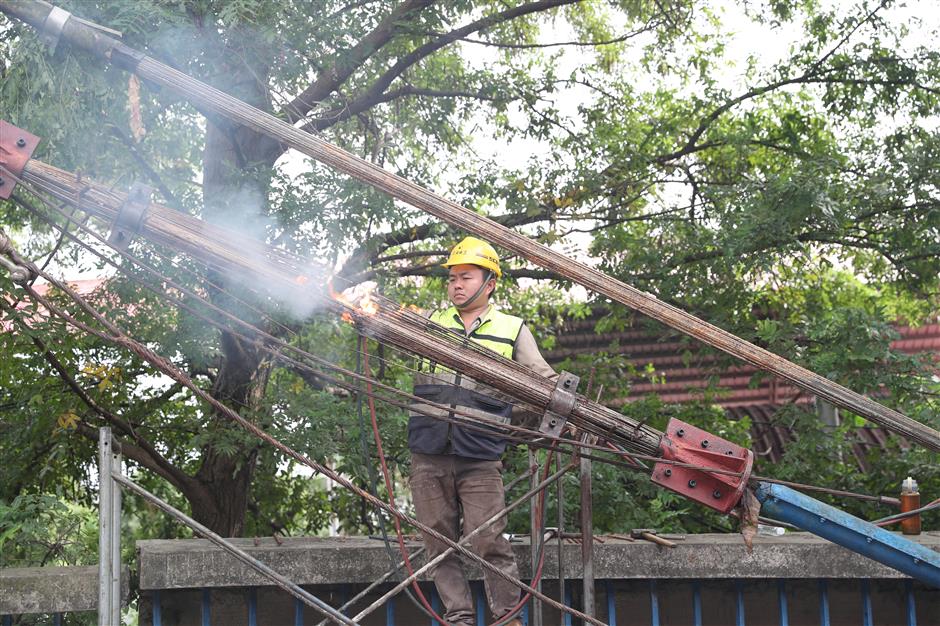 An engineer at work dismantling the old Maogang Bridge. Work started on the bridge in Songjiang District on September 22 this year. The bridge had served the people of Maogang Town for 38 years.

Standing on Songpu Bridge and looking to the west, visitors will see two huge curves stretching across the Huangpu River’s upper reaches. They are the No. 2 and No. 3 Songpu bridges.

No. 2 Songpu Bridge, a highway exclusive bridge in Chedun Town, was completed in December 2005 and opened to traffic in January 2006.

No. 3 Songpu Bridge, also named the Songwei Bridge, opened to traffic in June 2010. As part of Songwei Highway, the bridge is an important traffic access point that connects Songjiang and neighboring Jinshan District.

With double-cable towers holding a multitude of steel cables, Hengliaojing Bridge in Songjiang District, which opened to traffic on December 30, 2015, is the second youngest river-span bridge on the Huangpu River. The bridge is also the river’s first all-concrete cable-stayed bridge. Relief roads and pavements were built on both sides of the bridge for the convenience of non-motor vehicles and passengers commuting between Shihudang and Maogang towns.

In September this year, construction began of the Jiasong Highway River Crossing Bridge. The bridge, which will connect the Yongfeng Community in the north and Maogang Town in the south, will be 1.825 kilometers in length. When completed, it will become the Huangpu River’s first suspension bridge. 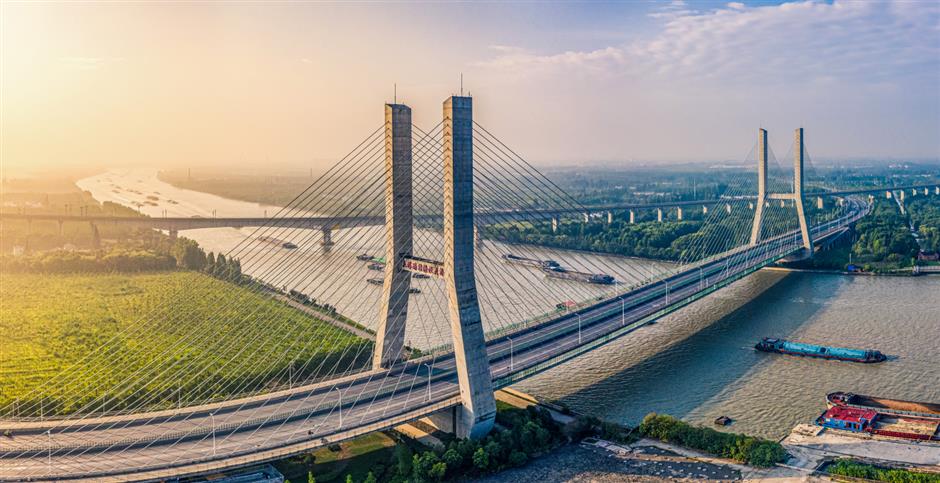 With its double-cable towers holding tens of steel cables, Hengliaojing Bridge in Songjiang District is the second youngest river-span bridge on Huangpu River. 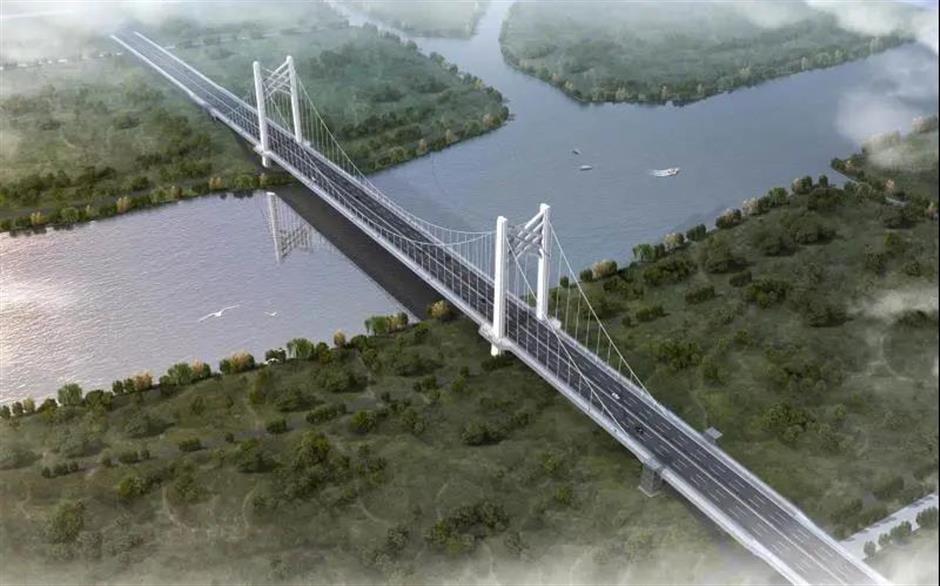 An artist’s drawing of Jiasong Highway River Crossing Bridge in Songjiang District. The bridge began construction in September this year.