A group of poets celebrated the 11th anniversary of Songjiang-based Huating Poets Society and the release of their new collections at a paddy field in the district’s Sheshan Town in early November.

The poetry salon took place among acres of bumper golden crops, with a scarecrow wearing a red scarf standing in foreground and a landmark white radio telescope with 65 meters in diameter looming in the background. 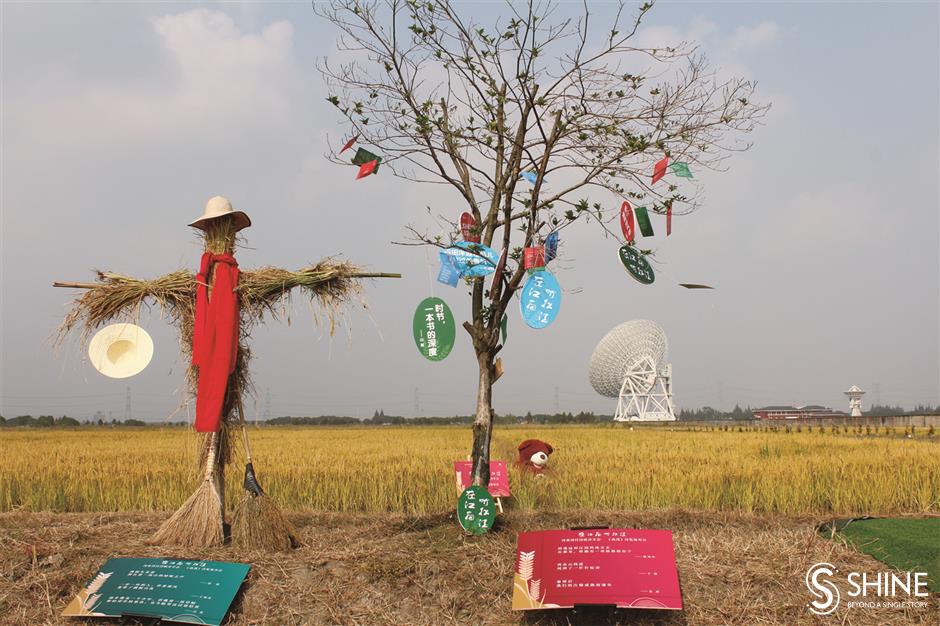 The poetry salon took place among acres of bumper golden crops, with a scarecrow wearing a red scarf standing in foreground and a landmark white radio telescope with 65-meter diameter looming in background. 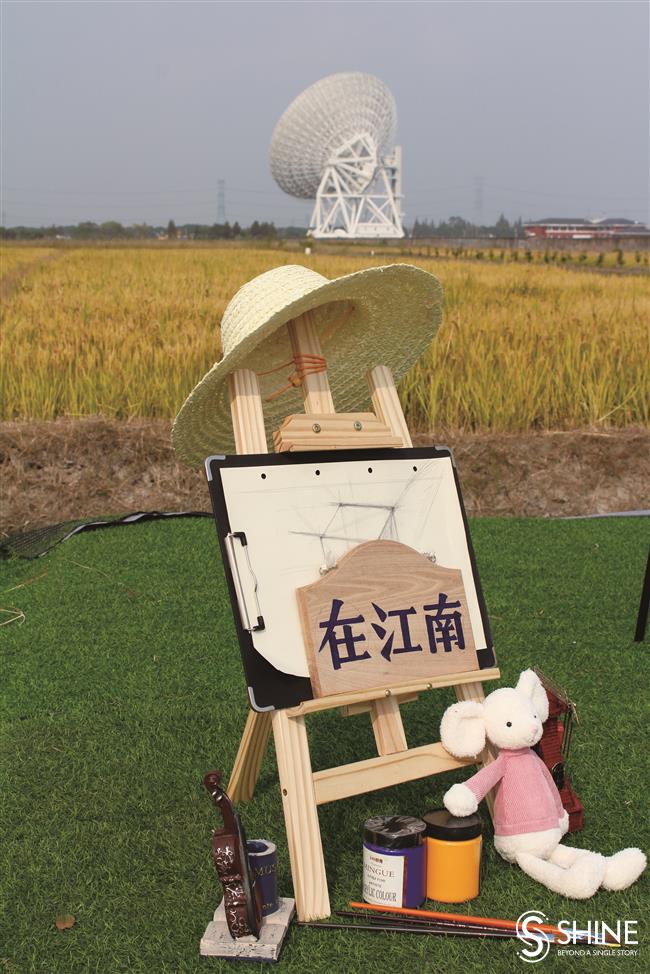 Members of the club decorate the venue with items including dolls and an easel.

“I would like to compare my daily life to a spike of rice and poetry writing to the sunshine and soil necessary to its growing,” said Man Chen, current president of the society.

The club, since its official establishment on November 15 in 2009, has recruited more than 50 members and published 40 poetry collections.

Wang Fuyou, a migrant worker from eastern Anhui Province who has been living in Songjiang since 2001, has been writing poetry for 19 years. Wang was named this year’s “Grassroots Star,” a prize from the Songjiang government in praise of residents who have achieved outstanding cultural accomplishments.

“I used to write poems about my feelings and reflections on a migrant worker’s life. As I gradually accustomed myself to a new life in Songjiang, my writing focus also changed to write more about its landscapes,” said Wang.

Wang Yinggao, another “Grassroots Star” who received the honor in 2018, started writing poetry when he lost his job at a local electric appliance factory in 1992.

“I was an orphan and brought up by my uncle, who was a geography teacher, in Songjiang. I used to accompany him to museums where he guided me to trace strokes of illustrations portraying Songjiang’s various scenic spots,” said Wang. “After I became laid-off, I had plenty of leisure time. So I would ride on a motorbike while searching for odd jobs and write about Songjiang’s scenery. I would feel excited when a real scenic spot matched the one I had remembered from my childhood.”

Xu Junguo, a member who was once invited to be a poet-in-residence at Beijing Capital Normal University from 2011 to 2012, is the backbone of the society and always encourages club members to exert their own individuality in their writing in spite of the fact that the club’s ambience is in harmony.

“Poetry writing is a professional skill. On one hand, we are encouraging club members to hone their skills; on the other hand, we also promote poetry writing and appreciation in villages, communities and schools,” said Xu. 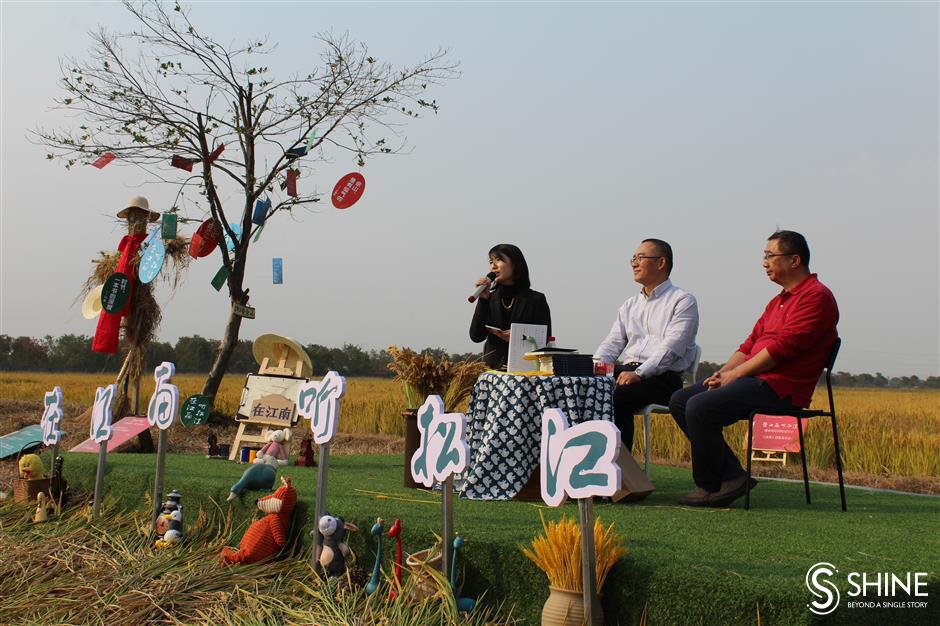 Man Cheng (right), current president of Huating Poets Society, and Li Xiao (center), a member of the poets society and Chinese teacher of Songjiang No. 2 High School, are present at the salon. 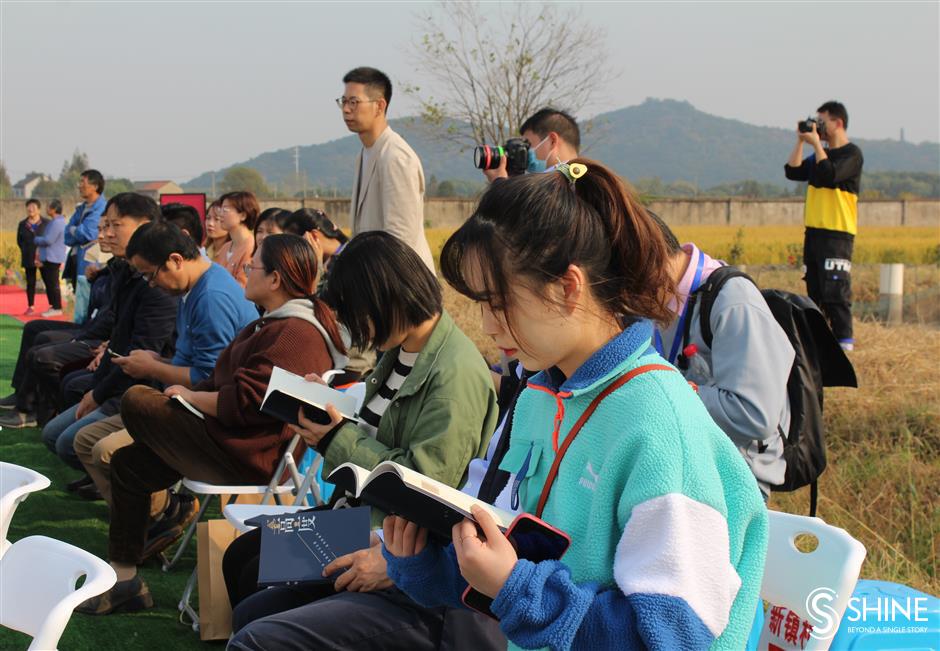 Zhang Meng, an official in Yaojing Village, Maogang Town of Songjiang District, is one of the founders of a village poets society, the Egret Poetry Society.

“The rural area is a place with much poetic scenery that matches perfectly with poetry writing,” said Zhang.

Li Xiao, a member of Huating Poets Society and a Chinese teacher at Songjiang No. 2 High School, organizes a poetry appreciation class at Runfeng Neighborhood in Fangsong Community on the first Tuesday of every month.

“The poetry class serves the community residents who, belonging to different trades, interact with guest speakers and me. I benefited from the experience. When people understood what I was trying to express in my poetry, I felt quite moved,” Li said.

“The second and third categories of poets oversimplify relations between them and the world, one too pessimistic and the other too optimistic. The first type of poets are repellent and the last type deserve our respect,” Xu said. 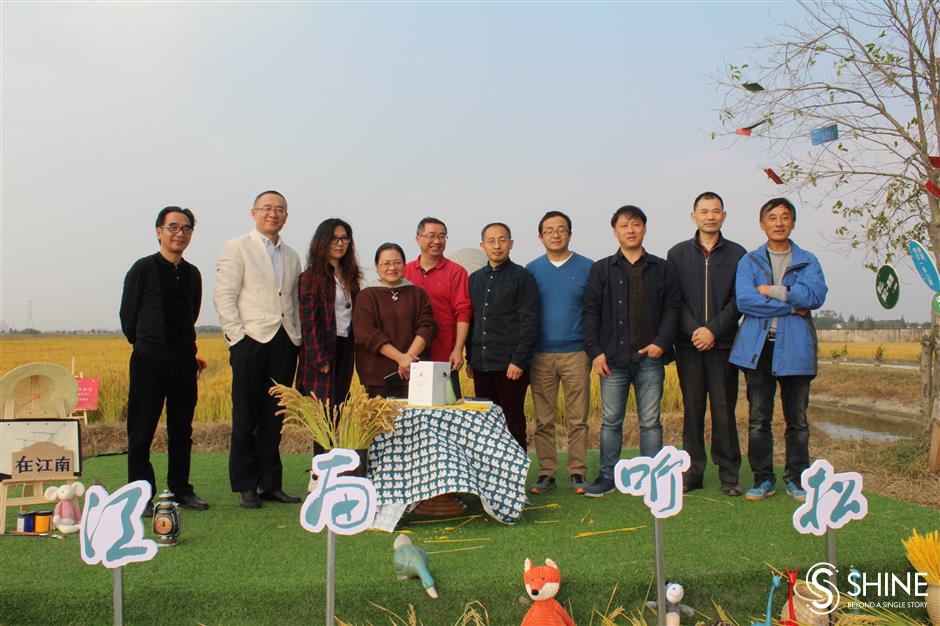 Members of Huating Poets Society pose for a group photo. The poets society, founded on November 15 in 2009 by its first president Bai Chen, has recruited more than 50 members and published 40 poetry collections.