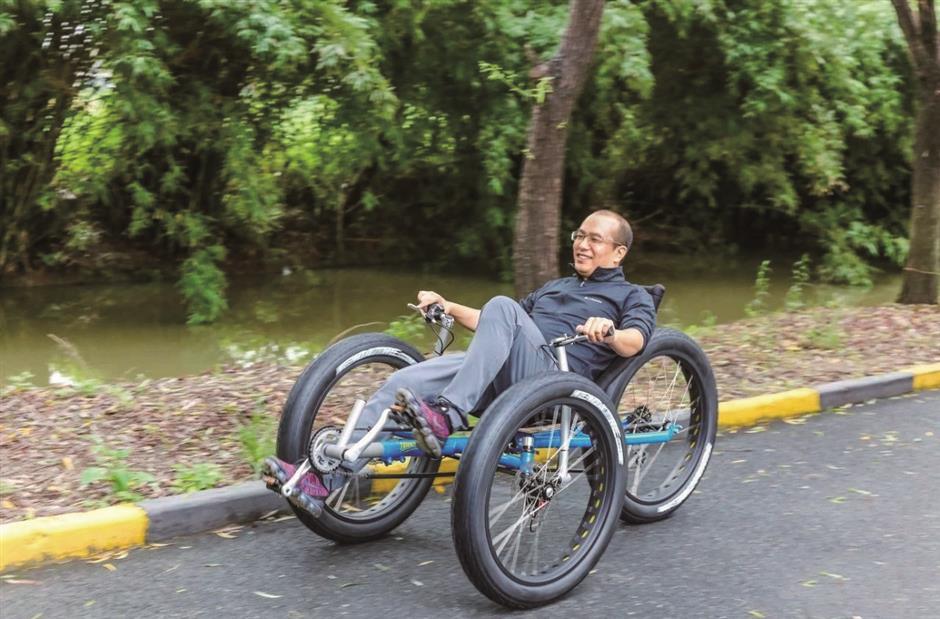 One of the recumbent trikes developed by Shanghai Chiyan Industrial Co.

Recumbent trikes of more than 20 types have been developed and are being sold by a Songjiang company in the district’s Xiaokunshan industrial zone.

Shanghai Chiyan Industrial Co, one of the biggest recumbent trikes manufacturers in China, has developed more than 20 kinds of trikes with different functions, including light-weight cushioning trikes, all-terrain trikes and folding trikes. One of its self-developed brands, Tri-Matrix, is favored among cycling enthusiasts for its unique design, novel appearance and comfortable feeling.

Zhou Yanggang, general manager of the company, is a cycling enthusiast born in the 1980s. Keen on cycling as a child, Zhou started assembling his own bikes when he was in junior high school. In total he has bought around 20 bikes.

But his habit of cycling caused him to have waist and back pains and scratches of all kinds were unavoidable.

Later Zhou got to know recumbent trikes and started to explore how to make cycling safer and more comfortable in riding trikes.

Zhou founded his recumbent trikes company in 2011. With six years of practice and improvement the company developed its first national patent for trikes. And within the next two years, it won an additional three national patents.

So far recumbent trikes developed by the company are mainly sold to the United States and the European Union, with an annual sales number of about 1,200 vehicles. The prices of the trikes range from 3,000 yuan (US$440.4) to 28,000 yuan.

“Recumbent trikes are less noticed in China. Quite a few Chinese people think riding a recumbent trike is dangerous. But it actually has a history of more than 120 years abroad and has increasingly gained favor with people throughout the world,” said Zhou.