The 2020 Yangtze River Delta International Cultural Industries Expo opened to the public on Thursday at the National Exhibition and Convention Center in Shanghai.

The gala has attracted more than 1,000 cultural and art institutions from the delta region, around the country and all over the world, a 10 percent increase on last year’s event.

The expo offers business opportunities as a trading platform and includes a host of forums, offline and online, on how to stimulate the delta’s cultural industries, optimize resources to be integrated with tourism, and explore the making culture a part of daily life in the post COVID-19 era.

Shanghai Library’s booth gets its inspiration from Xujiahui Library, Shanghai’s earliest modern library built in 1847. Borrowing the main structure of the old architecture, the display area is separated into different spaces but linked with white nets, which break down the walls and help visitors peep through and communicate with each other.

Shanghai Library presents some of its precious collections, carefully selected from its more than 56 million old books, newspapers, letters, calligraphy and albums. These include the rubbing copy during the Song Dynasty (960-1279) of calligraphy artwork “Li Spring of Jiucheng Palace” and the four-colored copy of “Jin Gua Ji” in the Qing Dynasty (1636-1912). 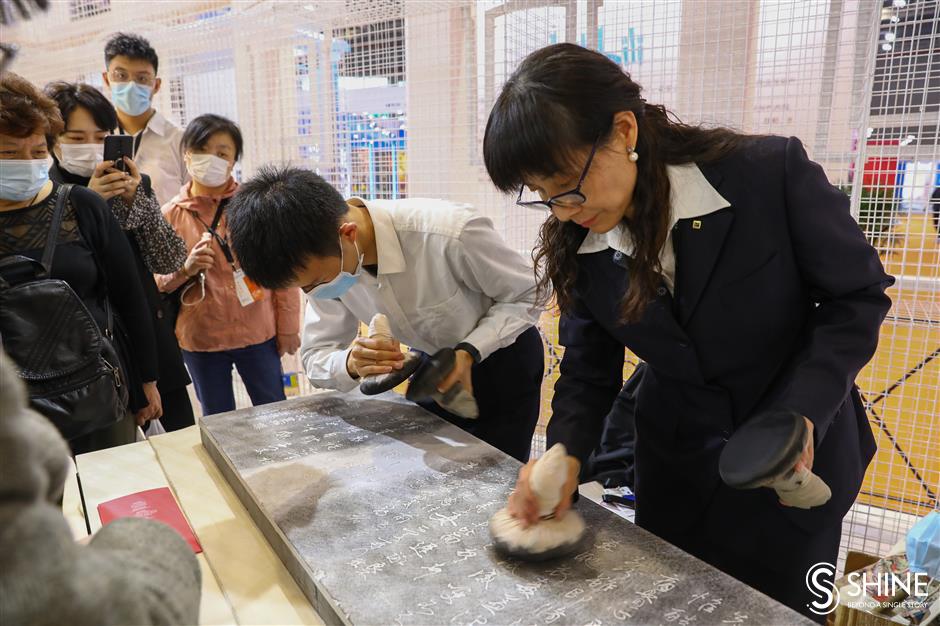 Faculty from Shanghai Library show the skill of inscription rubbing.

Shanghai Museum has brought more than 20 categories of cultural products developed from its annual “Art in Jiangnan (regions in the lower reaches of the Yangtze River)” exhibition. From tea sets to silk fragrance sachets, from kites to tents as well as Jiangnan food and snacks, culture is shown as a part of everyday life.

Giant digital painting “Grand Canal Scroll,” 135 meters long and three meters high, runs through the Jiangsu Province’s exhibition area. Birds flying, water flowing and boat drifting, the painting vividly depicts the beautiful scenery of the canal, while hundreds of poems by literati over the centuries pop up on an interactive digital screen.

“The canal with a history of 2,500 years runs across most cities in Jiangsu. With the help of high-tech, we display some of its landmark cities along the way, hoping to better protect and develop the canal culture,” said exhibitor Liu Haiqing. Fragrant pots from Xuzhou City of neighboring Jiangsu Province are on display at the expo.

Anhui Province’s showroom features 136 local cultural and art companies, presenting various folk arts and cultural relics such as paper cutting, willow weaving, porcelain making and wood carving. Visitors can roll up their sleeves and try making a souvenir with the help of the masters on site. A master from Anhui Province performs wood carving on site.

With the explosive increase of online shopping over the past year, livestream sales are a new highlight of the cultural fair. Hong Kong actor and comedian Wong Cho Lam held his livestream show on the 119th floor of the Shanghai Tower on Thursday night.

In line with the country’s 2020 poverty relief target, seven impoverished areas, yet rich in natural and cultural resources, in Xinjiang Uygur Autonomous Region, Tibet, Chongqing, as well as provinces of Qinghai, Guizhou, Hubei and Yunnan, are taking part this year, bringing their folk cultural heritage and seeking a sustainable, profitable way out of poverty in collaboration with counterparts in the delta region. 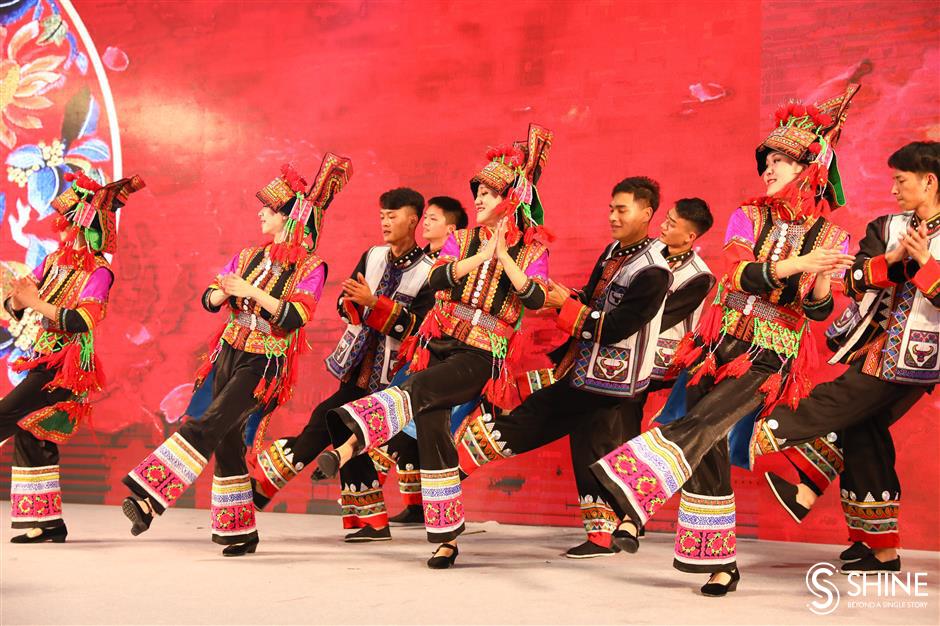 Yunnan has signed 10 contracts for its tourism and film-making projects with the delta’s companies, while the Yiling area in Hubei Province, a newcomer this year, has signed contracts with Shanghai for its tea and oranges worth 360 million yuan (US$54.7 million).

The Global Art Agency showcases fine art, digital art, paintings and photography of 86 artists and galleries from 32 countries. Overseas artists who cannot make it to the venue due to the pandemic are displaying their artworks through digital channels.

Tencent has brought its latest technologies to the expo and visitors can play chess with an AI robot, sing a Suzhou opera without any practice and take photos by the picturesque West Lake in Hangzhou with augmented reality technology.

The expo runs through Sunday.