The Marathon started at 7am on Sunday at the Bund and finished at the riverside West Bund Art Center in Xuhui District.

The annual event was scaled down from last year’s 38,000 participants in the aftermath of the coronavirus outbreak. Only the full 42-kilometer distance race was run, with 10km and 5.5km races cancelled.

No elite runners from overseas were invited this year, leaving the event open to domestic runners.

Jia E‘renjia, from Qinghai Province, became the first male runner to cross the finish line, clocking 2:12:44. It was Jia’s personal best, and also the Shanghai International Marathon’s new record for a Chinese male runner. Jia was followed by Yang Dinghong (2:15:13) and Li Guoxiong (2:16:57). 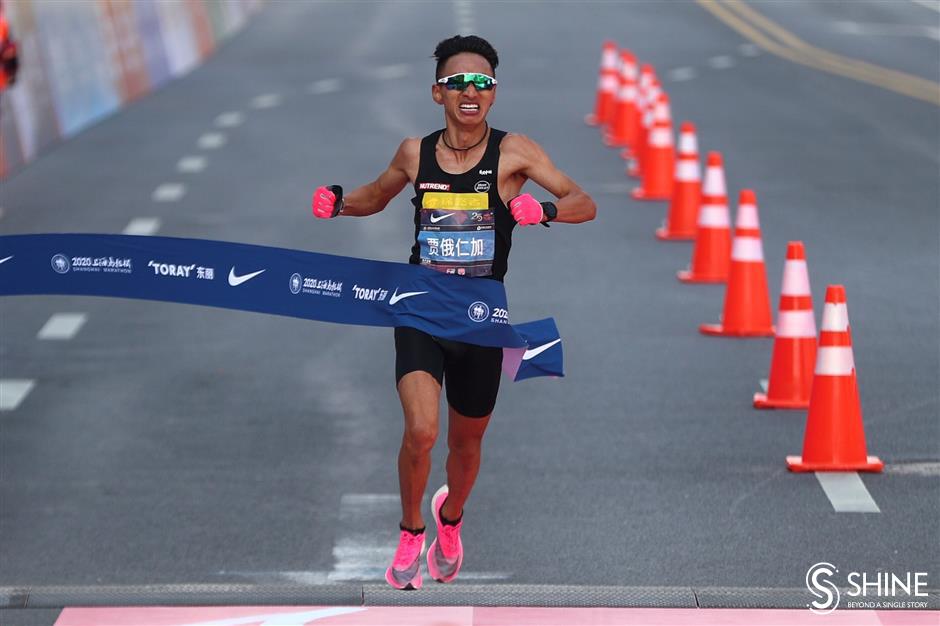 Li was also the first Chinese female runner to complete the 42km race in the 2018 and 2019 versions. She was 6 minutes and 25 seconds faster than last year.

“The track conditions are great,” said Li. “Physically I felt more at ease this year compared to the previous years.”

According to the organizers, 97 percent of male and 96 percent of female runners completed the race.

Despite the lower number of runners, the organizers had even more work this year, introducing a series of measures to make the post-pandemic race go smoothly and safely. 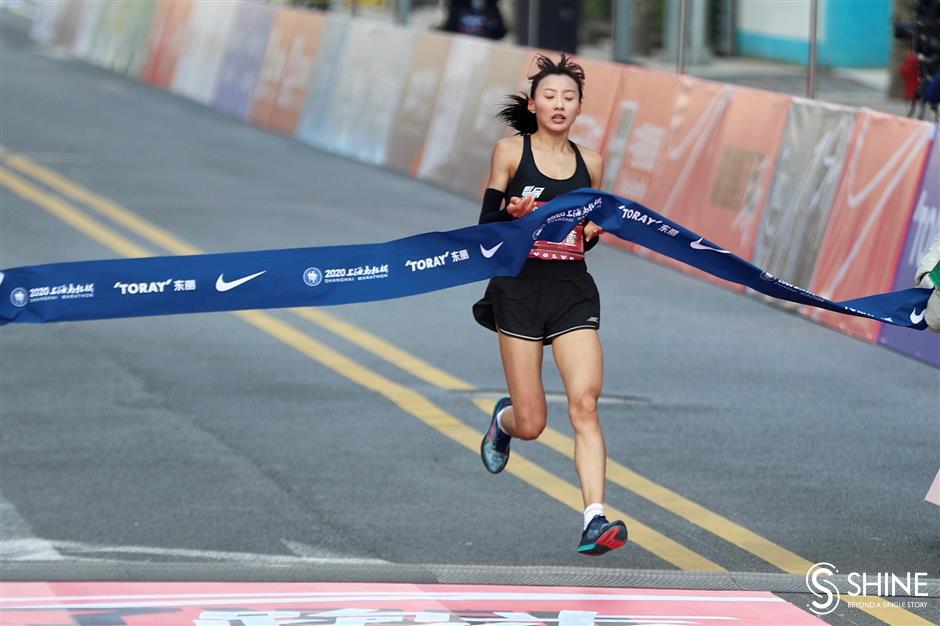 The starting area at the Bund was about 15,000 square meters, allowing runners to keep a one-meter distance from each other. They were divided into three groups and started their journey a few minutes apart to avoid crowding.

No spectator zones were arranged, though runners were still cheered by warm-hearted passers-by, and of course volunteers, along the route.

Some 3,872 volunteers and over 400 referees provided service for the event. Just like the runners and other front-tier staff, all of them underwent nucleic acid tests seven days before the race.

Wang Jiajia from Shanghai Jiao Tong University was among the 220 volunteers at the starting area, whose duty was to remind runners to wear masks properly and keep a distance from each other before the race.

“It’s a new duty for us this year under the special circumstance,” said Wang, who arrived at her post as early as 4am.

“There are 9,000 dots painted on the ground at the starting area, and we are responsible of reminding the runners stay on their own dots.” 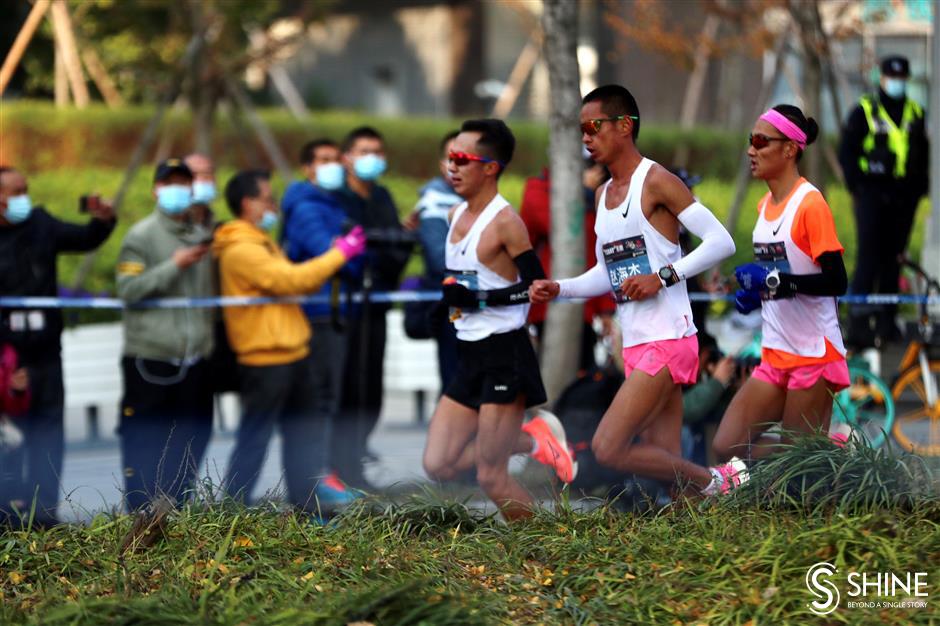 Twenty-six medical sites and 20 ambulances were arranged along the route, as well as 15 drink stations and 9 snack supply stations. Runners were provided with new masks as soon as they completed the race.

According to Zhou Jin, general manager of organizer Shanghai Donghao Lansheng Event Management Co, preparation for this year’s Shanghai Marathon started as early as in May.

“We kept frequent communication with anti-pandemic experts and discussed all details of our race procedures with them,” said Zhou.

The organizers had to reject race applications from a few runners who were from high-risk provinces and areas after the quota distribution draw was held.

“We have to thank those runners for understanding us, as well as all other runners who cooperated with us closely and reported their temperature on a daily base 10 days ahead of the race,” she said.

The organizers had made emergency plans including canceling the race if participants had shown virus symptoms during the event.

“Such emergency mechanism increased the organizing cost, but safety is our priority,” Zhou added. 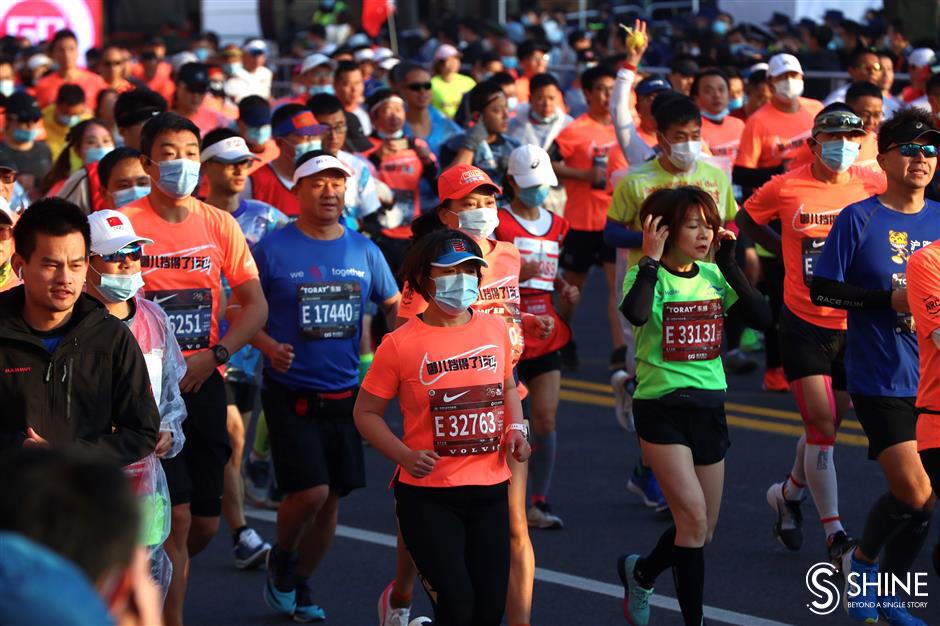 They're off, runners are on their way.