State-of-the-art industry at the forefront of pandemic fight 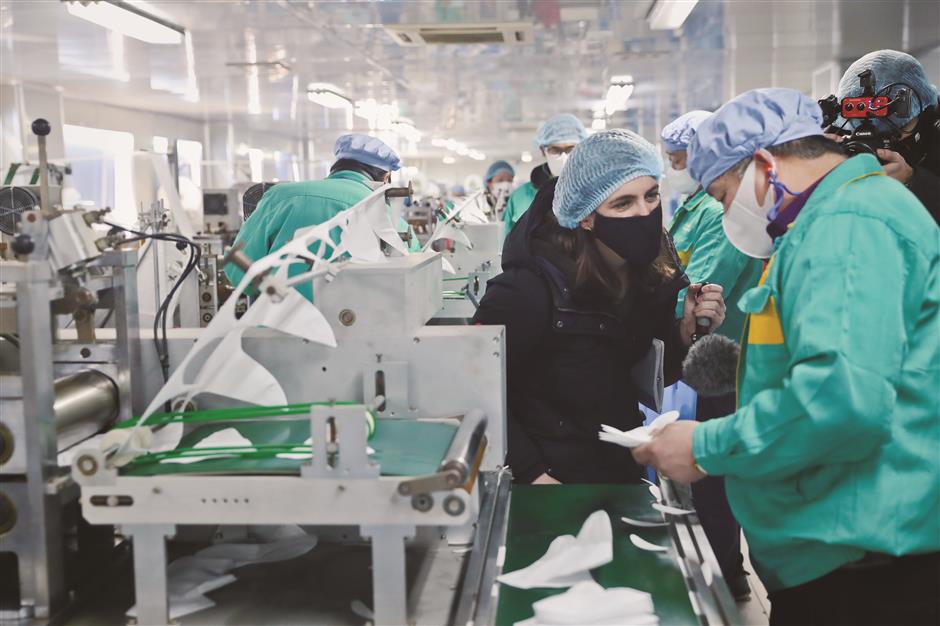 A foreign journalist interviews a worker making face masks at Shanghai Dasheng Sanitation Products Co in Songjiang District early this year when the company was in full swing to produce face masks to help fight against the COVID-19 outbreak.

Songjiang has been at the forefront of the fight against the coronavirus epidemic thanks to its strong position as an innovative business district.

The district developed a state-of-the-art innovation chain during the construction and development of the Yangtze River Delta Region G60 High-tech Corridor, which prepared Songjiang better than many cities as the pandemic spread throughout the world.

When the COVID-19 hit China, Songjiang-based Shanghai Dasheng Sanitation Products Co and Medicom (Shanghai), a leading manufacturer and distributor of protective equipment and infection-control solutions, spared no efforts to satisfy the domestic demand on protective items against the virus.

Dasheng, established in 1997, was exclusively an exporter until coronavirus hit the nation. But it immediately suspended exports and turned its full attention to producing facial masks for domestic market.

“All of our factory staff were on Spring Festival holiday leave,” said Wu Shengrong, chairman of the company. “The country was short of masks and we had no stockpile. So I decided to restart our holiday-idled production lines immediately.”

Of the factory’s 160-plus workers, only 10 percent were still in Shanghai. And, on Chinese New Year’s Eve, while most people were enjoying traditional family reunion dinners, Wu and 14 workers were operating production lines.

“What could we do?” Wu said. “Drivers, cleaners and management staff all pitched in to keep production running around the clock and produce as many masks as we could. We had no other choice.”

In two days, 120,000 masks were made and ready to be distributed. Wu modestly called Dasheng’s effort “a drop in the bucket” among the tens of thousands of privately owned companies in China that answered the call to help combat COVID-19.

Over the past 23 years, Dasheng has developed more than 130 types of facial masks, securing 68 patents. Most of the machinery used by the company was developed in-house.

Other companies in Songjiang District did not lag behind.

“We did not halt our production line during the Chinese Lunar New Year holiday and kept the prices as normal during the epidemic,” said Li Jun, manufacturing manager of the company. “Quality was guaranteed and our stable and high-quality platform satisfied the urgent demand when a large amount of nucleic acid detection kits were needed.” 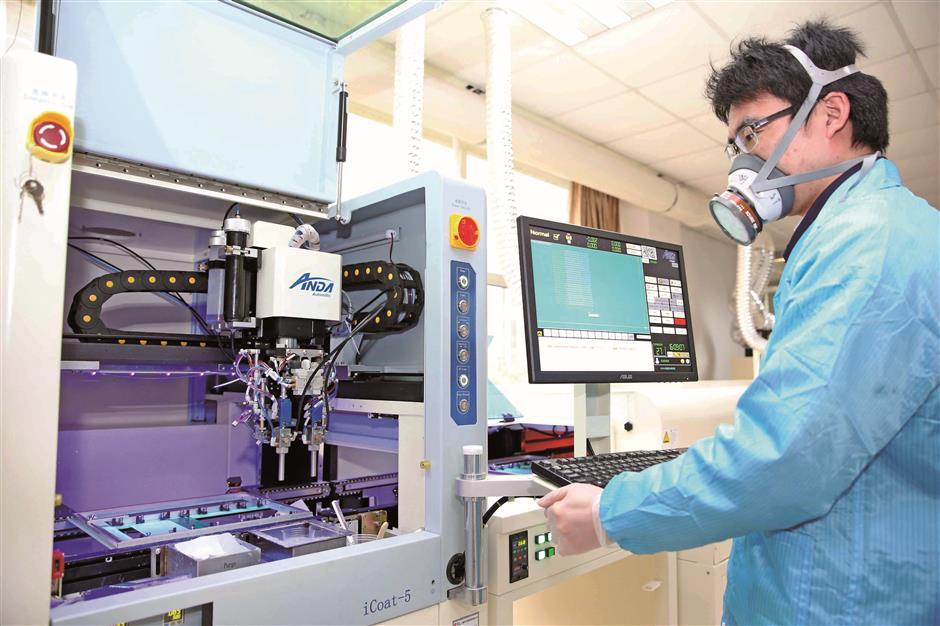 In the medical apparatus and instruments manufacturing field, Shanghai Xunuo Co Ltd manufactured key fittings of respirators and supplied 3,500 life-support machines to the Leishenshan Hospital, a makeshift hospital in Wuhan, the then epicenter of coronavirus in China.

Fusheng Industry in Songjiang District accelerated the production of a medical oxygen generation system and supplied it to the domestic market.

In terms of artificial intelligence and integrated circuit areas, ICkey took only seven days to finish the research and development of a forehead thermometer before it hit the production line.

Fire engine manufacturer GrumMan made firefighting robot adaptations, turning them into robots that could disinfect places and items.

Shanghai Tonglian, a pharmaceutical company, was involved in the clinical research of carrimycin, a new antibiotic, of which China owns complete independent intellectual property rights. It provides important support in the prevention and treatment of the coronavirus.

The formation of an industry cluster accelerated in the district focusing on strategic emerging industries of the G60 High-tech Corridor.

The industry chain is complete in the district, gathering a number of leading and advanced enterprises.

Mega projects, such as the Tencent Yangtze River Delta Artificial Intelligence Supercomputing Center, have been introduced into the district, and construction on the G60 Brain Intelligence Innovation Park, Evergrande New Energy Vehicle and AST is on fast track.

A total of 236 projects, with an investment of above 10 million yuan each, have started construction in the district this year.

Innovative breakthroughs have been made on small and medium-sized aero-engines, a high-end server and 5G communications, while the medicine involved in the battle against the epidemic has been made thanks to the world-class international center for brain science and disease model development, Keen Lab, YouTu lab, Evergrande New Energy Vehicle Global Research Institute and a low-carbon technology innovation platform.

The injection of research and development has grown to 4.3 percent from 3.6 percent when the G60 High-tech Corridor was established in mid-2018, and 89.2 percent of the investment came from enterprises.

The district has nearly 350 listed companies, while the number of new companies this year surpassed the combined figure between 2016 and 2019.

The district will further promote the improvement and upgrade of an industry structure, accelerate the construction of an advanced manufacturing industry cluster, and step up the construction of the Yangtze River Delta Region G60 High-tech Corridor to boost its economic development.