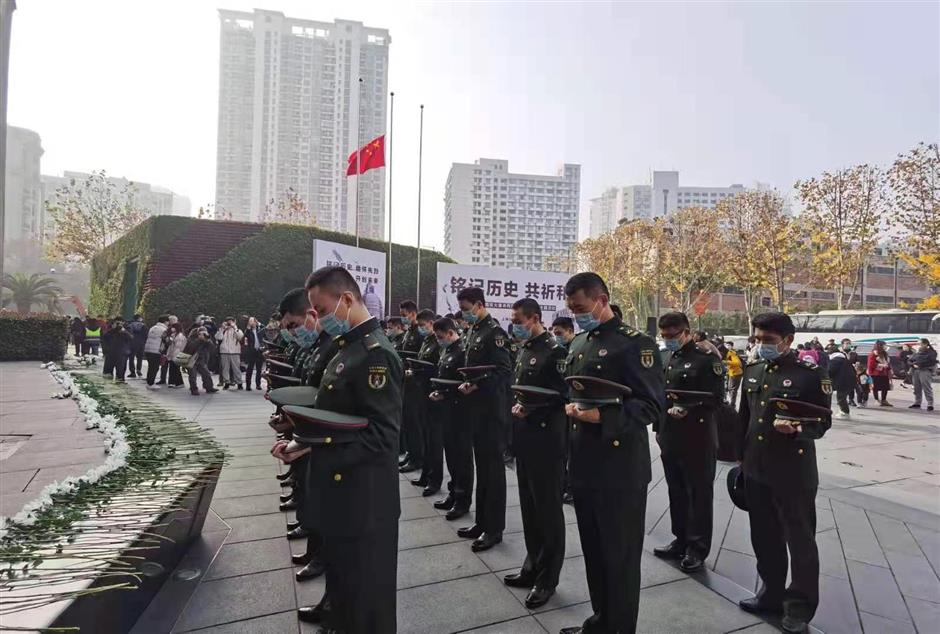 Officers and residents mourn the victims of the Nanjing Massacre.

More than 100 people attended a memorial ceremony on Sunday outside the Sihang Warehouse Battle Memorial to mourn the victims of the Nanjing Massacre.

Sunday marked China’s seventh National Memorial Day for the Nanjing Massacre 83 years ago, known as one of the most barbaric episodes of World War II.

After the fall of the then Chinese capital on December 13, 1937, the invading Japanese troops brutally killed about 300,000 Chinese civilians and unarmed soldiers in the six-week massacre.

About seven weeks before the massacre, along Shanghai’s Suzhou Creek, Sihang Warehouse in Jing'an District, witnessed one of the bloodiest episodes of the city's wartime history. A battalion of about 420 Chinese soldiers engaged in a fierce four-day fight with the invading Japanese army.

Now, the site displays remnants of the battle at its west wall, where eight bomb and more than 400 bullet holes remain.

At 9am on Sunday, the memorial ceremony started in front of the bullet-riddled wall.

China’s national flag flew at half-mast, and all stood in silent tribute. People sang songs, recited poems and placed flowers to commemorate the victims and pay tribute to the brave Chinese soldiers in the 14-year Chinese People's War of Resistance Against Japanese Aggression.

The battle memorial has developed a WeChat applet, allowing people who can’t come to the scene to light a virtual candle online for peace.

In 2014, China's top legislature designated December 13 as the National Memory Day for the victims of the Nanjing Massacre as the historical suffering must not be forgotten.

Also, the Chinese government has preserved the survivors’ written and video documents which were listed by UNESCO in the Memory of the World Register in 2015.

Four survivors have passed away this year, reducing the number of officially registered survivors to only 73.