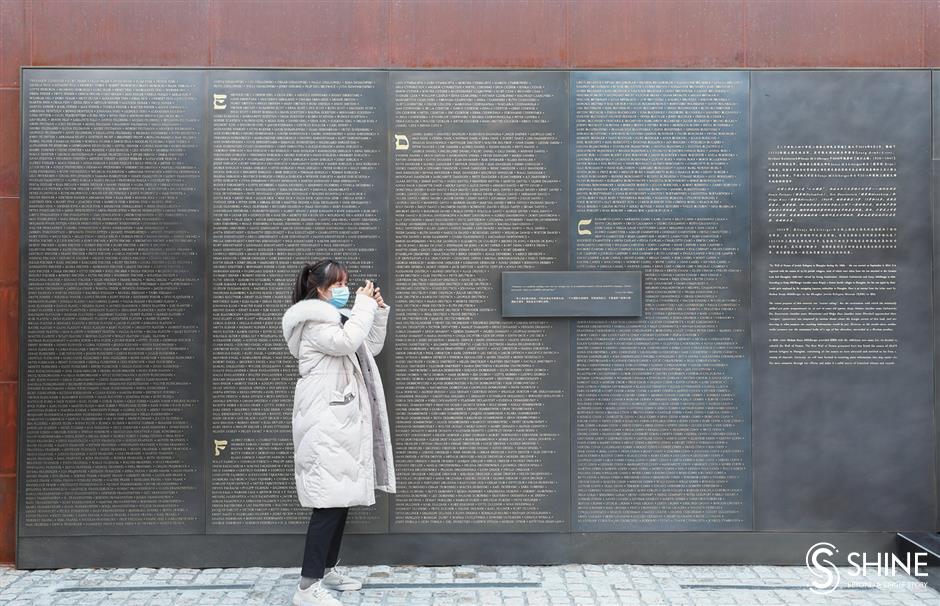 A “Wall of Names of Jewish Refugees” in Shanghai during the 1930-40s has been relocated to the expanded central plaza from the entrance of the museum. It is one of the most popular sites for Jewish visitors, who look for their parents’ names.

Two residential houses in Hongkou District that were homes to Jewish families have become new exhibition areas of the Shanghai Jewish Refugees Museum.

The museum, which opened to the public on December 8 after a three-year renovation project, has more than quadrupled its size to 4,000 square meters to create more space for items to exhibit after donations, mainly by former Jewish residents, surged 10-fold to over 1,000 items.

The iconic museum, in the North Bund area along the Huangpu River, has dedicated itself to telling the stories of the more than 20,000 Jews who took refuge from Nazi persecution in the city during World War II.

Experts and researchers, such as Yang Jiemian, director of the International Advisory Board for the museum, and the consul generals of Israel, Germany, Poland and the United States in Shanghai, attended the opening ceremony. A Shanghai Jewish Refugees Historic Materials Research Center has also been launched in the museum.

“The enlargement and renovation program shows the great importance the Shanghai and Hongkou District governments attached to the unforgettable history,” said Edward Shapira, Israel’s consul general in Shanghai. “During the darkest period in human history, when Jews were persecuted in Europe, Shanghai opened its doors to Jews fleeing Nazi Germany.

“Shanghai was one of the very few cities which opened its doors, when too many doors were closed.”

Jewish people around the world also sent congratulations through videos for the reopening of the museum.

“I want to congratulate, from the depth of my heart, the curator and the management of the museum in expanding the exhibition,” said 2004 Nobel chemistry laureate, Aaron Ciechanover.

Arthur Schneier, president of the Appeal of Conscience Foundation, said he was grateful that the city government and Chinese authority have helped to make a historic museum possible.

“I can hardly wait to return to Shanghai to see the expanded exhibitions,” Schneier said.

Jack Rosen, president of the American Jewish Congress, said he hopes and believes the museum will keep playing an active role in the future cooperation between Chinese and Jewish people.

Laurence Tribe, professor of Harvard Law School, was born in Shanghai in October 1941, to Jewish refugees.

“My rest of life is possible because that harbor was made available,” Tribe said.

Ganis produced a short film titled ”A Children’s Song,” about Jewish people’s stories in Shanghai. It has won almost 30 international nominations and awards, including Best Short at the New York Independent Film Festival. It featured at the Shanghai International Film Festival in 2016. 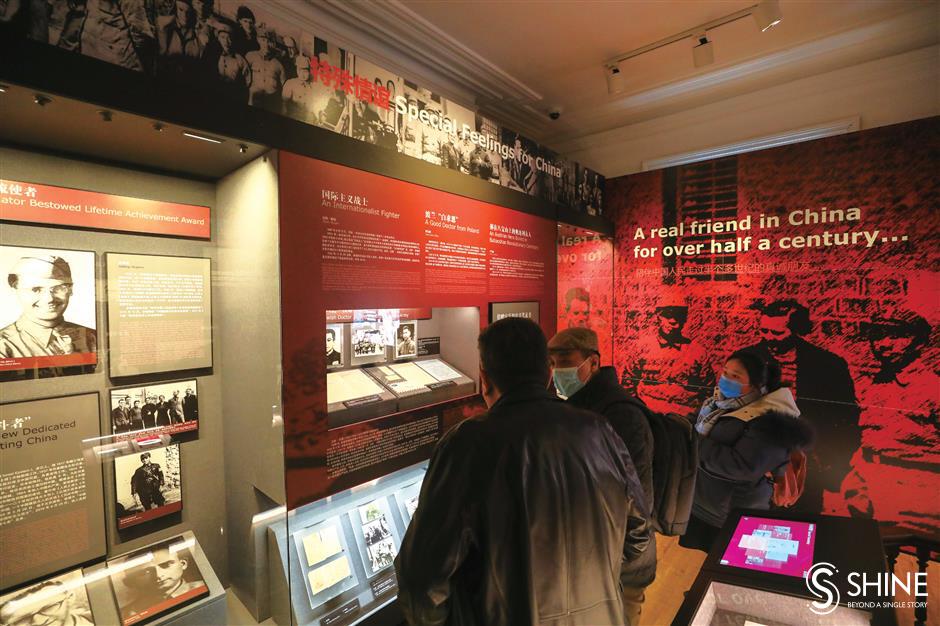 Chen Jian, curator of the museum, said the main theme of the expanded exhibitions is to establish “a community of a shared future for mankind.”

The Shanghai museum focuses on a “warm-hearted” theme of human compassion and salvation rather than on the horror stories of Nazi persecution that dominate many Jewish-related museums, he said.

Yang, a former director of the Shanghai Institute for International Studies, said the museum “set the first step to practice a shared future community for the vision of mankind.”

“Standing here in the museum, people can look back on history and forward to the future, which has great meanings,” Yang said.

New exhibits include personal narratives, paperwork and memorabilia from refugees who came and lived in Shanghai. New technologies, such as multimedia film and transparent screens, have been installed to improve the “immersive” visitor experience.

Nearly 1,000 exhibits, over a dozen restored scenarios and 161 stories are on display in the renovated museum.

One of the museum highlights is the “Wall of Names of Jewish Refugees” in Shanghai during the 1930-40s. It is one of the most popular sites for Jewish visitors, who look for their parents’ names and has been relocated to the expanded central plaza from the entrance of the museum.

The names on the wall have been increased to over 18,000 from 13,000, while additional space is spared for more names to be added during future research.

The museum was built in 2007 on the site of an old Ohel Moshe Synagogue. But it didn’t get its first exhibit until a former Jewish resident donated a toy rickshaw three years later. Since then, the museum has attracted, on average, 100,000 visitors a year.

The museum has received 500,000 visitors from 120 countries since its doors opened 13 years ago, with about one-third of those visitors coming from abroad.

Six sections of the renovated museum trace the Jewish diaspora during the war, how refugees came to Shanghai, carved out a life and the contributions they made to the city’s culture in music, painting and photography.

“That period of history should inspire the young people of today and contribute to the development of human civilization,” Chen said.

Josef Rossbach, a retired doctor who now lives in Hamburg, donated a toy rickshaw to the museum on a visit in 2010. The 76-year-old was born in Hongkou to Jewish parents who fled Nazi Germany in 1939. The toy forms part of the exhibition, along with Rossbach’s photos and narrative. 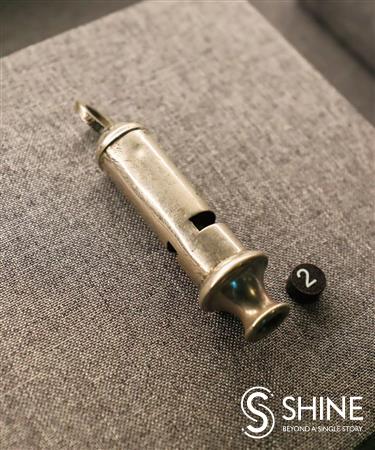 A silver whistle used to manage foreign inhabitants in the ghetto

Another exhibit displays five passports belonging to Ruth Callmann, who fled to China in 1939 with her family. The passports record how she arrived in China from Germany and then migrated to the US after the war.

She first showed the passports to Chen in 2009, but declined his donation request at first because they were “part of her life,” Chen said. However, before Callmann died in the US in 2014 at the age of 96, she asked the trustee of her legacy to donate the German passport and the four US passports to the Shanghai museum.

Over 1,000 exhibits now span the whole spectrum of refugee life in Shanghai. They include passports and visas provided by Ho Feng-shan, then Republic of China consul-general in Vienna, ship tickets from Europe to Shanghai, and residency and marriage certificates issued by local authorities.

A wedding gown worn by Betty Grebenschikoff, a Jewish refugee who now lives in the US but spent 11 years in Shanghai, is one of the new exhibits. The classic white dress, made from French fabric in a local style, was hand-sewn by her mother-in-law, who worked in a Nanjng Road wedding dress store. Her third and fourth daughters also wore the dress when they married.

Grebenschikoff initially declined to donate the gown to the museum but changed her mind on her fifth trip to her former residence on Zhoushan Road, near the museum, in 2013.

“I’ve come home again,” said Grebenschikoff of the residence where she lived 70 years ago. “I have four daughters, a son, grandchildren and great grandchildren, but without Shanghai, I would have nothing.”

Another key artifact is the marriage certificate of a young Jewish couple that tied the knot in Shanghai during the war.

“It’s a reminder of a happy moment in the lives of two people,” Chen said.

Other items to go on show are a journal written by a pupil at a Jewish elementary school. It explains how youngsters studied mathematics and writing, but spent the bulk of their days learning the Jewish language.

Another artifact is a vinyl recording on which a Jewish man recounts how he and a school friend — a local child — used to speak to one another in a unique language that combined elements of Yiddish and Shanghai dialect.

Another new item to the exhibit is a silver whistle, used to manage foreign inhabitants in the ghetto. Hnnelore Esquenazi, a former refugee who lives in Sao Paolo, Brazil, donated it.

Chen visited Esquenazi in November 2019 when the museum hosted an overseas exhibition. The 86-year-old Esquenazi recalled her experience in Shanghai and presented the whistle and other artifacts to the museum along with a 30-minute video of her

Jin Wenzhen, whose grandfather owned a rice store in Hongkou, donated a handbag. He met a Jewish couple who came to borrow money for the medical treatment of their child in fever. They left the handbag as payment and promised to redeem it. Jin kept it throughout his life and handed it to his granddaughter to return to the owners if they ever came back.

“To open a new exhibition in houses that were homes to Jewish refugees shows Hongkou’s ambition to preserve their history and cultural heritage during the urban construction,” a district government official said. 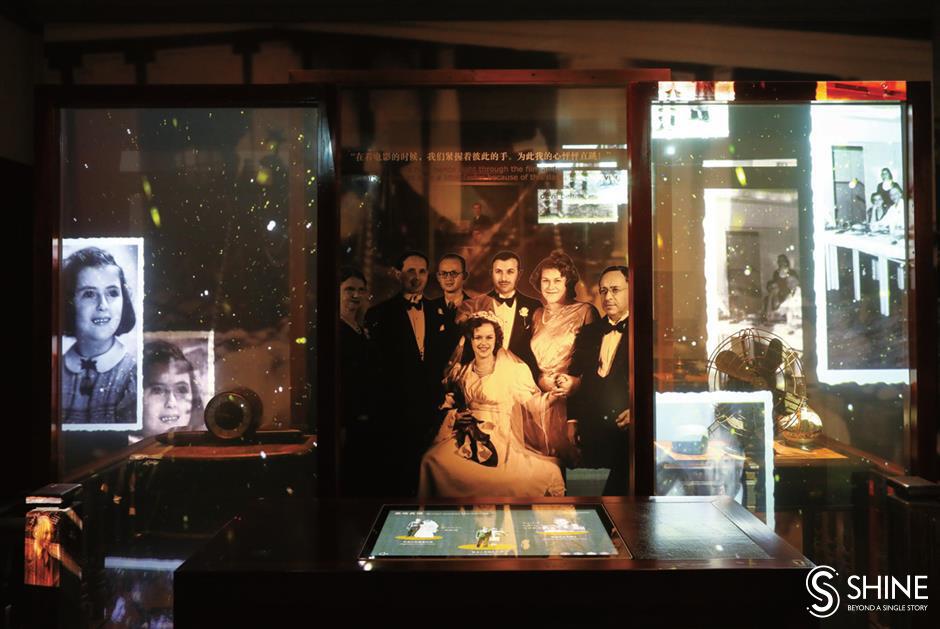 Exhibits tell the bitter-sweet memories of the Jewish people during their stay in Shanghai.

The district government launched a new round of development on the North Bund waterfront, where the museum stands, to make it a “new engine” for Shanghai’s development.

About 8.4 million square meters of new construction space has been planned on both sides of Century Avenue in Pudong, including dozens of office buildings to house about 100 headquarters of multinational firms, international organizations and functional institutes.

The museum renovation features a new library, with more than 8,000 books donated by Kurt Wick, 82, who fled to Shanghai from Vienna in 1939 with his family when he was just a one-year-old.

The books are mainly about the history, culture and politics of Jew. Some cover the period when Jews fled Nazi-occupied Europe and found shelter in Shanghai. After being diagnosed with lung cancer, Wick decided he needed a suitable place to place his collection for posterity.

He moved to London in 1948 and continued in the handbag business his parents started in Shanghai. He began collecting all kinds of books about Jewish history and amassed nearly 10,000 books, filling every corner of his apartment.

When hearing the museum was being expanded and its plans to build a library of Jewish history and culture, he immediately decided to donate his books to the museum.

“I want to say thank you to Shanghai for saving me and my family,” Wick said. “I think the books will be useful in Shanghai because you have a lot of students and Jewish visitors.” “The museum aims to play a bigger role in academic research and cultural exchanges, so the books are valuable to us,” Chen said.

An International Advisory Board for the museum has been established. Twenty-seven members, including historians and descendants of refugees, sit on the board to facilitate academic research, museum operations and international communications.

The members come from China, the US, the UK, Australia, Poland and Japan. During the coronavirus pandemic, overseas members and other experts have been using video links to offer suggestion for new exhibits.

Member Joe Jeff Goldblatt, a professor with the Queen Margaret University in Scotland, said: “I was determined to tell this story and in doing so, help promote Shanghai, its Jewish refugees’ museum and the Shanghai people’s example of righteousness, nobility and honor.”

Steve Hochstadt, a professor from Illinois, the US, and a descendant of Jewish refugees in Shanghai, said he would advise how to show the history of Jews in Shanghai, their difficulties and the help they received from the Chinese people.

Hochstadt also plans to research how the Jewish communities in Shanghai from Germany, Australia, Poland, Baghdad and Russia interacted with each other during the war.