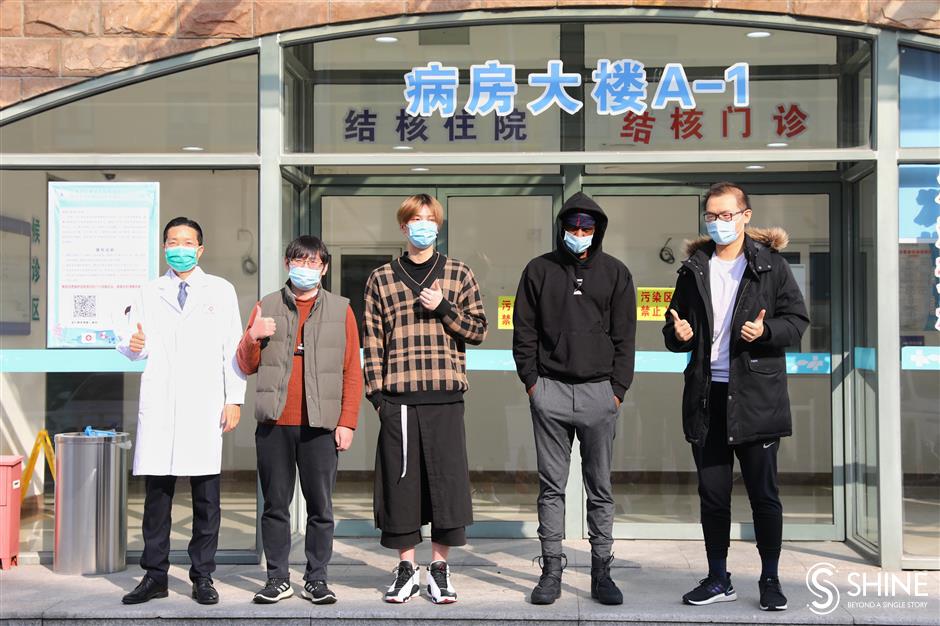 Four of the discharged patients take a group photo with Dr Shen Yinzhong at the Shanghai Public Health Clinical Center in Jinshan District on Saturday.

Ten people who contracted coronavirus overseas were discharged from the Shanghai Public Health Clinical Center on Saturday morning after recovery, according to the Shanghai Health Commission.

Two are foreigners, the other eight Chinese. The youngest is 10 years old.

All had mild symptoms and received personalized care including traditional Chinese medicine and special nutrition.

One of the discharged patients, aged 33, who did not want to give his name, came back from Japan on November 29 and was sent to hospital for medical observation after reporting his fever history at the airport.

He was confirmed with mild symptoms and was sent to the center for treatment on December 1.

“The nurses here have attended me well and I also received great mental support from them and my families,” he said.

He added that he didn’t show any other symptoms except the fever, which lasted about one day.

“I slept well and killed my time by reading a lot of books," he said. "I had to take a nucleic acid test every day, which was kind of painful.”

The patient has finished his two-year contract in Japan and will continue to work in Shanghai.

After leaving the center, he will first undergo a 14-day quarantine in a designated hotel, then take another two-week self-quarantine at his company's request.

“The Shanghai method in the COVID-19 prevention and treatment has proved that this disease is controllable, preventable and treatable,” said Shen.

So far, of all the 1,087 imported cases, 1007 have been discharged upon recovery while 80 are still hospitalized.