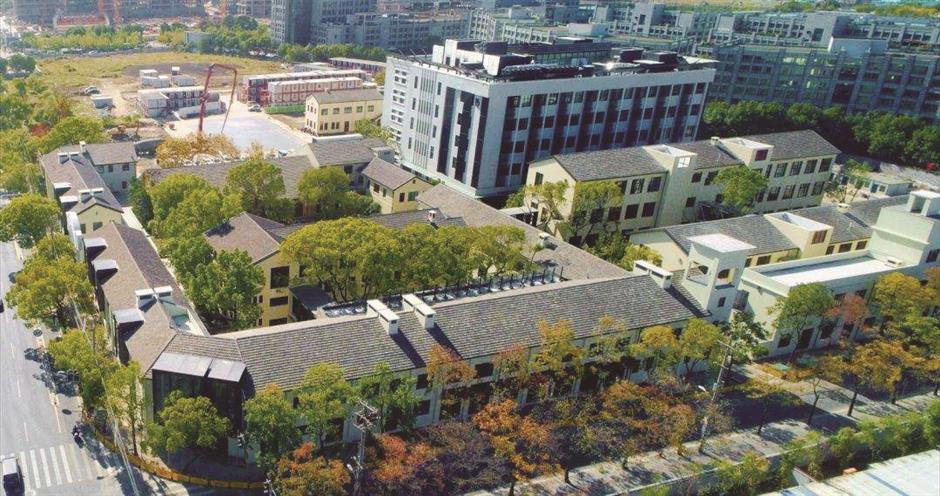 The China-Israel Innovation Hub in Putuo District celebrates its first anniversary this month.

The China-Israel Innovation Hub in Putuo District, a milestone in scientific cooperation between the two countries, celebrated its first anniversary on December 3.

The hub is a major step in Shanghai’s implementation of a national strategy to promote Chinese and Israeli scientific technological innovation.

Leading Israeli incubators, such as Ehealth and Trendlines, which focus on medical and agrifood technology, have been operating in the hub to serve Israeli high-tech and startup firms.

A wide range of new products, featuring Israeli technologies, have been developed in the hub, including a hand exoskeleton, a Dead Sea mud mask, non-invasive glucometer and a thermal imaging scope.

Thirty-two companies, incubators and projects operate at the hub — the former site of the Shanghai Hero Pen Factory in Taopu Smart City — primarily in cybersecurity, intelligent manufacturing and health promotion.

“The innovation hub has become a key platform to drive cooperation between Israel and China,” said Edward Shapira, Israel’s consul general in Shanghai. “Despite COVID-19, the hub still attracts many companies.”

Israel is well-known for its innovation in the fields of information technology, water treatment, agriculture and security, the consul general said.

“I was deeply moved by the innovative spirit of entrepreneurs, the support of government leadership and the management ability of the park,” he said.

An Israel Day was held in the hub on December 8 as part of the celebration. Israel’s investment environment, culture and tourism products were introduced and shared during the event.

Several companies based in the hub unveiled their latest achievements or high-tech products during the celebration. One company, Ai-Care medical technology, unveiled a soft hand exoskeleton that can be used to help people with hand paralysis in rehabilitation. A user’s movement is analyzed by a sensor, via bio-electric signals, on the skin surface.

The non-invasive glucometer from Aozhen Bio can test blood sugar through saliva, while a Dead Sea mud mask contains 21 minerals and other ingredients to ease wrinkles.

Trendlines, the Israeli incubator that focuses on medical and agrifood technology, is among the first cluster of enterprises to make a base at the Putuo hub. The group’s mission is to create and develop companies to improve the human condition. It invests in the life sciences, specifically in medical device and agritech and food technologies.

The latest agritech project under Chinese investors and partners, a recirculation aquaculture system, has been developed to save over 90 percent of water, which will be a huge economic boost to farmers.

“Hopefully, the company will grow rapidly to have over 1,000 employees with tens of thousands of children, not only taking our remote lessons about coding but also learning the Israeli principles of innovation and critical thinking,” said Ami Dror, the founder and CEO of LeapLearner. “I like to solve problems and I usually start enterprises that can solve these problems. Of course, many of them failed. Passion creates time and I can run companies all around the world only because of one thing — passion.”

As part of the celebration, the Putuo District government signed an agreement with cybersecurity firm 360 to develop an information technology public service platform to serve startups, scientists and projects from Israel and China.

The International Digital Security and Ecological Operation Center aims to attract companies from both home and abroad by developing cutting-edge technologies.

A Yangtze River Delta Region China-Israel innovation cooperation network was established at the celebration. The heads of China-Israel innovation organizations in Shanghai and neighboring Jiangsu and Zhejiang provinces launched a new network. Additional companies, such as AnGeek Cybersecurity and 360 Visual Tech, also signed agreements to operate in the hub.

The district government revealed intellectual property rights protection has become a key function of the hub, where the Putuo IPR bureau was established.

Thirty-seven trademarks have been registered since the hub’s inauguration last year, along with more than 50 patents.

The district also established an investment foundation totaling 150 million yuan (US$22.9 million) to assist startup firms get off the ground.

Many mature technology firms, especially those about to be listed, can easily attract local investors, but those at the early stage of their development lack support, said Li Wenbo, director of Putuo’s science and technology commission. The foundation, initiated by the district government, will mainly help those companies.

Companies and institutions that move into the hub before the end of 2019, for instance, can enjoy lease and tax reductions, as well as subsidies for office decoration, while foreign professionals can claim housing subsidies and awards.

The innovation hub aims to attract 60 high-tech companies from across the world within three years. An innovative system will be formed in the park that is in line with international standards and is conducive to the transformation of scientific and technological achievements. A series of research findings will be transformed into commercial products and a cluster of influential brands will be created by the China-Israel innovation exchange.

Despite the pandemic, over 20 events have been held, including an international coding competition for young people and various startup contests between Israeli and Chinese entrepreneurs.

As part of the first anniversary celebration, the 2020 Shanghai Digital Innovation Conference was launched.

Construction has begun on two key projects at the hub: a garden-style scientific research center and an international high-rise office. The two projects also marked the beginning of the innovation hub’s second-phase expansion. The former site of the Shanghai No. 8 Dye Chemical Factory is giving way to office buildings and R&D centers, covering about 420,000 square meters.

Developed by the state-owned Huayi Group, the owner of the chemical factory, and Lingang Group, the project covering 62,000 square meters aims to attract R&D centers and the headquarters of multinational enterprises.

The other project, which has a construction area of 125,000 square meters, will stand out amidst the preserved buildings of the Shanghai Hero Pen Factory, a brand dating back to the 1930s.

Designed by the US Ennead Architects, the hub preserves and renovates the historical factory buildings of the former pen company.

The Hero Pen Factory was established in October 1931 as a symbol of China’s manufacturing capabilities. The gold fountain pens made there were once presented as national gifts to foreign leaders. The site of the factory features industrial building styles from the 1950s to the 1990s. Fifteen structures have been preserved, while two office buildings at 150 meters and 90 meters tall will be built among them.

The historical buildings will house the first batch of enterprises in the innovation park. The structure of the buildings at 127 Qilianshan Road is being reinforced and their historical appearance retained.

To support companies based in the hub, Putuo has accelerated infrastructure construction around the center to improve the environment, along with up-market commercial, talent apartments, education and medical services, ecological construction and community centers.

The hub has also launched an overseas office in Tel Aviv, Israel to enhance the scientific innovation collaboration between the two countries. The office, or Shanghai Innovation Center, in Tel Aviv, is working with the hub’s other two Israeli offices, later to be set up in Haifa and Beersheba, to help transfer technologies with the hub in Putuo.

Shanghai’s first chemical industrial parks, which surround Taopu, were set up in 1954 when the development of industrial enterprises was at a peak in the 1980s. However, rapid industrial development also resulted in pollution. To restore the area’s environment, the city has relocated most of its factories and is converting the industrial land into a 500,000-square-meter park, the largest in the downtown area.

The smart city project is expected to help Taopu, which literally means “peach river,” return to its original environment.