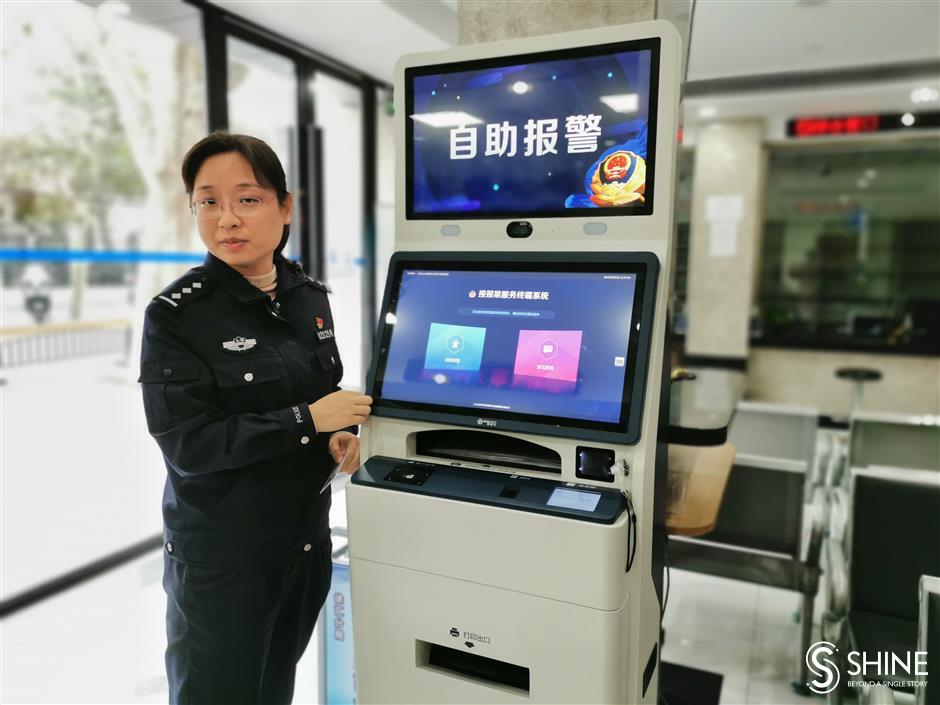 A machine on which residents can file police reports in Xuhui District. The cases reported are registered in a computer system.

In Xuhui District, people who file police reports must now do so on a machine.

The cases reported are sorted out in a case handling system developed by the district police that ensures transparency in the law enforcement process and provides an overview of the district's safety environment.

People filing a report register their identity card numbers and mobile numbers, and can scan materials related to the case.

People without identity cards can't use the machine but must either file reports in person or call 110.

Xuhui police now integrate all cases reported to them through 110 calls and in person on an Internet platform that keeps track of every case.

Police officers are dispatched to cover reported cases via the platform, which is used to hold them accountable for their actions. They must ensure cameras they wear on their uniforms record the entire process of cases they're handling. The resulting footage, as well as their opinions on cases, are uploaded to the platform for case review and supervision.

Shen Xiaofeng, head of the Xuhui police legal affairs squad, said the new system facilitates the work of police officers who can now look up entire case history right on their phones.

“It saves them time spent on communications about cases and makes it more efficient for officers to solve them,” Shen said. "The system is the local police department's latest effort to ensure unconditional report taking from the public and zero case dismissals. The role of our city's police is to keep residents in their administered areas safe, and it’s important for us to handle all of their concerns to reduce bigger safety risks."

One local resident who has used the machine to report a case is a woman surnamed Feng, who last month reported 300 yuan (US$46) missing from the bag she left in a restaurant to Tianlin Xincun police.

Police officers immediately took action and caught the thief later that day. Feng said she didn’t expect police to take her case seriously and was pleasantly surprised how efficient they were.

The new system also helps police follow and analyze safety conditions in the district to improve their daily work.

The number of burglary cases reported last year was down 72 percent compared to 2019, with 23 percent more solved. About 95 percent of residential complexes and office buildings in the city have intelligent security surveillance equipment installed.