Free COVID-19 vaccinations for Shanghai residents traveling abroad for individual demand such as work and study began on Thursday at 17 health centers across the city.

Seven people were vaccinated at the Dapuqiao Subdistrict Neighborhood Health Center, the site for COVID-19 vaccinations in Huangpu District.

They had booked the service via mobile phone app Jiankangyun and had shown their passport, valid visa, airline ticket, ID card, and hukou, or residence permit, at the center. 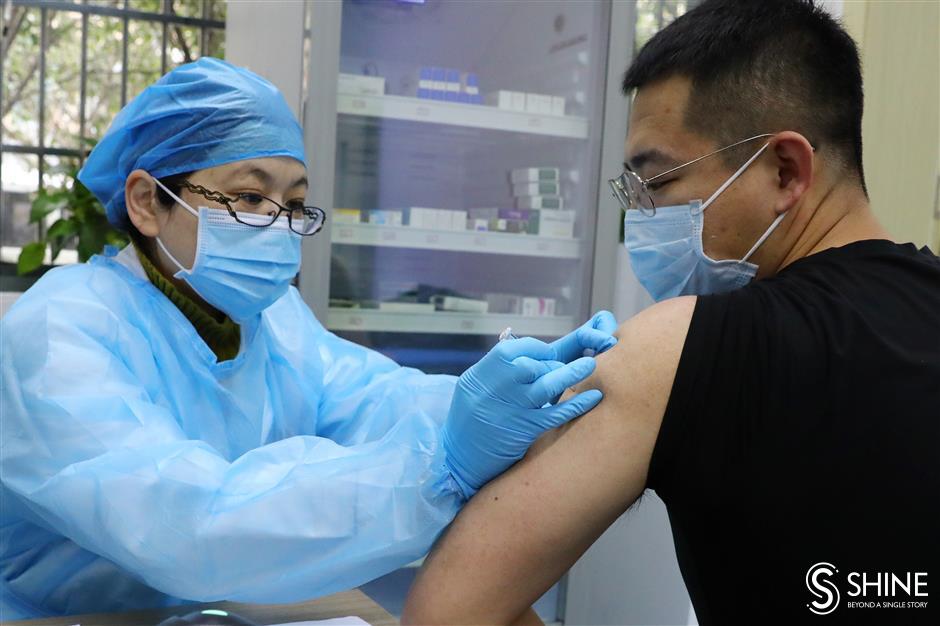 A man is injected with the COVID-19 vaccine at the Dapuqiao Subdistrict Neighborhood Health Center in Huangpu District on Thursday.

Gao Xue, an MBA student at Fudan University, is going to Switzerland as an exchange student on February 2.

“I bought the ticket long time ago and I asked my subdistrict many times about the date for vaccination,” she said. “Fortunately, it started today and there is still time for my injection before my departure.”

After being vaccinated, she was told to drink more water, take more rest and not take a shower for 24 hours by a doctor of the center.

“It's similar to the feeling of taking other vaccines,” Gao said.

Zhang Haode, another vaccine recipient, said he had been set at ease by the injection and now felt safe.

He is flying to Canada on February 4 to visit his elderly mother. He said he had been worried about her because they hadn’t seen each other for a long time due to the epidemic. 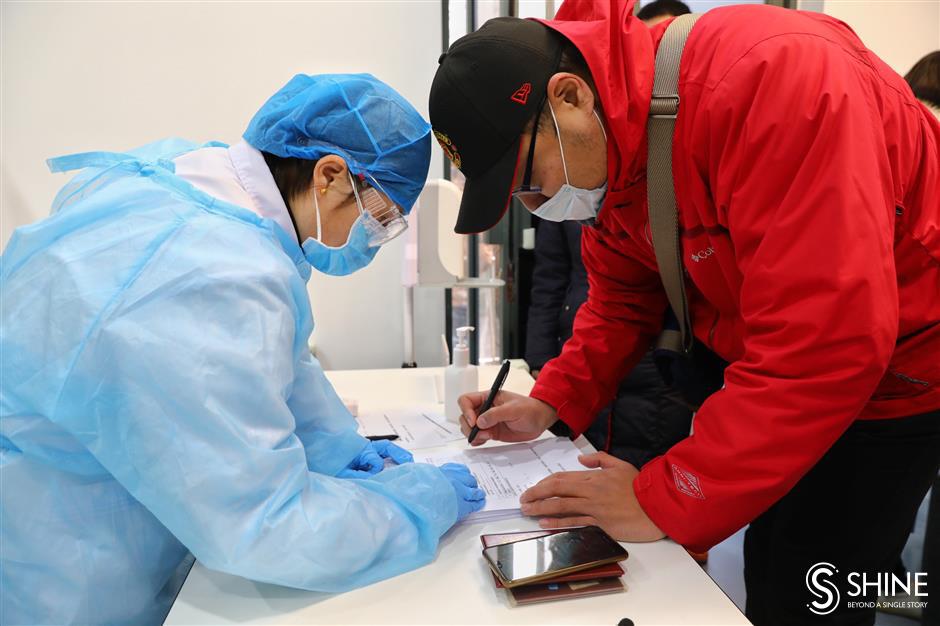 Zhang Haode fills in a form before being receiving his vaccination on Thursday.

After hearing that the vaccination was available for residents traveling overseas before February 12, he booked his spot in the early hours of Thursday morning. Once his reservation was confirmed, he immediately bought his plane ticket.

Thirty minutes of observation later, he left the center having had no adverse reactions.

An ambulance is on standby outside, said Gao Jiabao, chief of the center’s health care department. If anyone has a serious reaction to the injection they would be immediately transferred to a hospital.

By Thursday morning, around 100 people had registered for the vaccination in Dapuqiao center, Gao said. “Now thirty-five people can be injected per day from 1pm to 5pm on Mondays, Wednesdays, Fridays and Saturdays.

“Three doctors can vaccinate for 15 people per hour approximately so 50 people being injected in one day is achievable,” she said. “According to the actual operation situation over the following days, more vacancies can be released soon.” 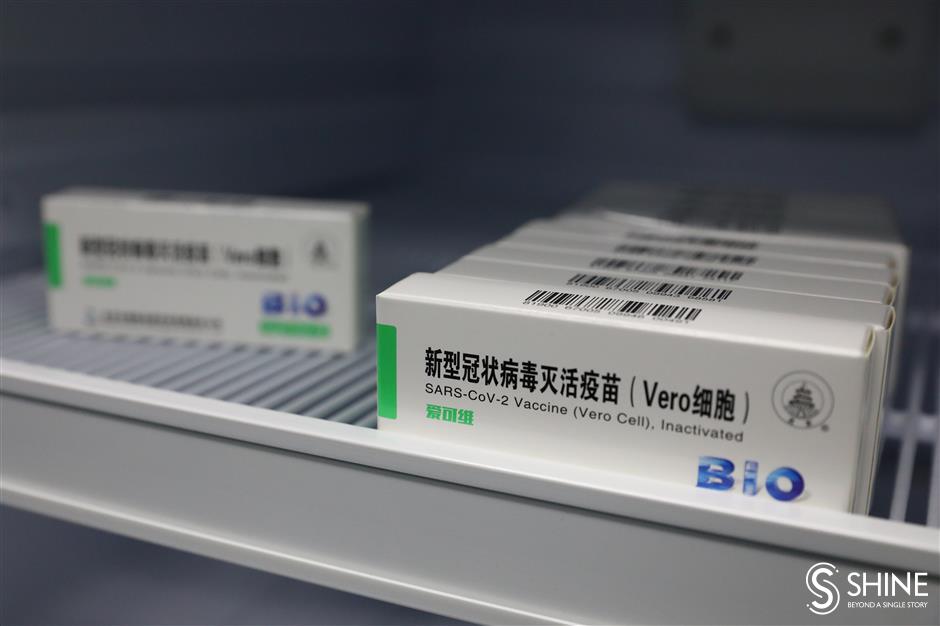 COVID-19 vaccine in the refrigerator at the Huangpu District health center. 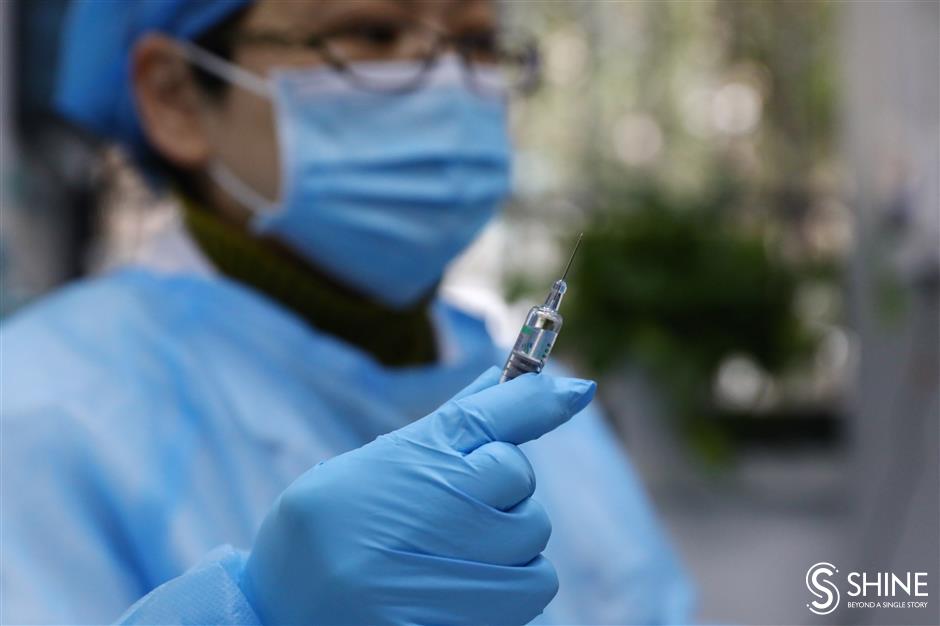 A doctor at the health center about to administer the COVID-19 vaccine.

After 14 days, the seven need to be injected again to ensure antibodies develop. The vaccine's protection period is at least six months.

As of Monday, 326,000 people at high risk in the city, including medical workers, customs staff who handle imported cold-chain products and police, had received the vaccine with no serious adverse reactions reported, officials said.

Residents, aged between 18 and 59, can have the vaccine but those with a fever or serious respiratory disease, who are allergic, pregnant, or have been infected with the virus, should not be vaccinated.

The service is not yet available for expats working or living in the city. Inquiries can be made at 12320, the city's health hotline.