A night market in Qibao has officially opened after a trial run in December. It will be open all year round and features snacks, many from Southeast Asia.

The Qibao Night Market was inspired by the Ratchada Train Market in Bangkok. It features a line of colorful tents selling snacks. There’s also a model train where craftsmen can rent a “compartment” and sell their works.

The new market has already proven popular as a place to eat or simply hang around with friends. Orange lights hanging over snack stalls brighten the dark, cold winter evenings.

Stall owners seem to have not only delicious delicacies but also stories about their food. 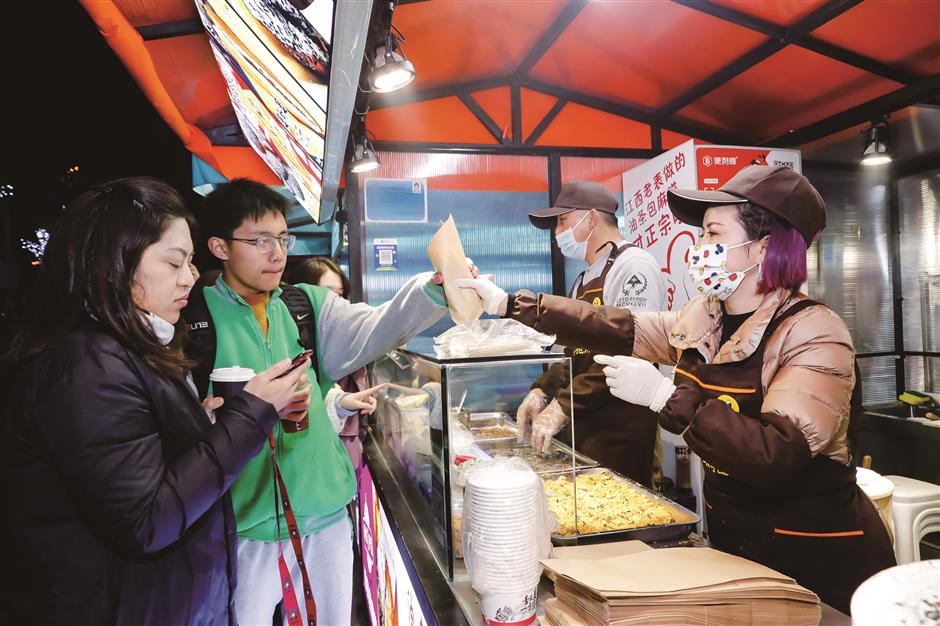 Liu’s stall sells a snack not commonly seen in Shanghai. It’s a fried dough stick bent in the middle and sandwiched with glutinous rice cake. The snack comes from the city of Leping in Jiangxi Province.

“I had a cake store and a hostel,” Liu said, “but due to the pandemic and several other reasons, my business failed. With the nighttime economy being promoted here, I saw a great opportunity for me to start up again.”

She explained, “Since July, I have been setting up snack stands at several other night markets, so I had some experience before coming here. In those other places, things didn’t turn out as well as I had expected.”

Liu added, “I only learned about Qibao Night Market when I was passing on Zhongyi Road one day. It was still in the setting-up process. I made inquiries and found that the rent was favorable, so I signed up for two stalls.”

Her stalls’ location was advantageous, drawing many customers during the trial phase. Even though the booths are outdoors, she keeps the site clean and tidy.

“Night markets are usually quiet in winter, but not here in Qibao,” said Liu. “Like the other stall owners here, I believe this is a good omen for the market going forward.”

Shen Jiayi and her friend 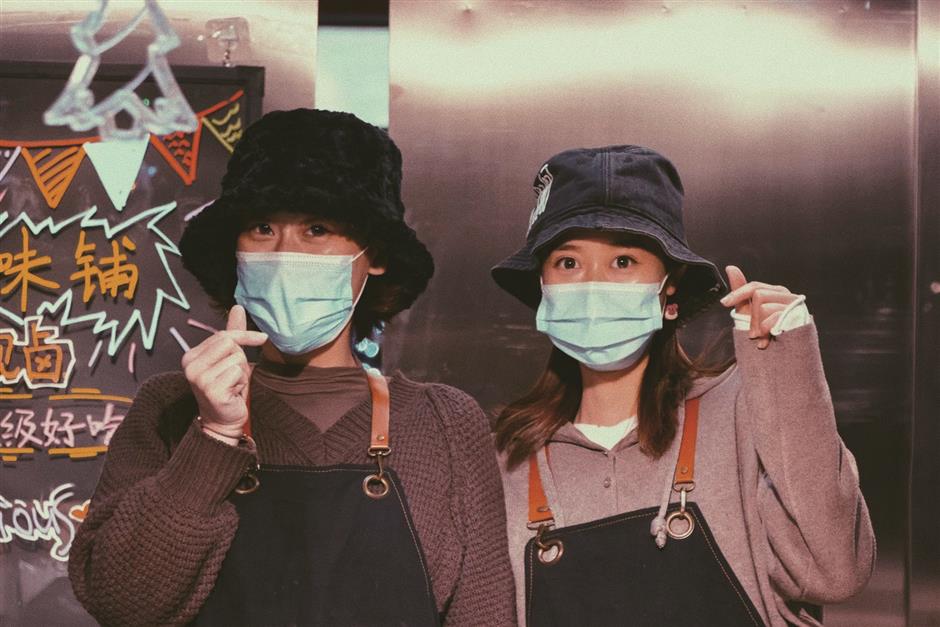 Shen and a friend opened a braised snack stall, with their images on the booth’s logo. They said they are motivated by their love for delicious food.

The income is nice, but even better, the pair are learning what it takes to run a small business. Family and friends have supported the endeavor.

“We are confident about our food,” Shen said. “We braise only one pot a day to make sure that it is enough to cover demand without any waste. It may seem like a simple stew, but it takes about four hours to prepare.”

The secret ingredient is the stock that Shen and her friend make, which takes a day to simmer.

“We once tried selling food through an online store, where we would cook for same-day orders,” Shen said. “Many people liked our food, but it was quite a distance from our kitchen to where people picked up their food. That was an obstacle to our expansion.”

The two girls said they found the Qibao night market by chance and felt lucky when their stall application was approved.

“The night market is big enough and the foot traffic is good,” Shen said. “I think this will prove to be an ideal location.”

“There are plenty of fancy restaurants in Bangkok, but when people think about the country’s feature food, street food springs to mind,” Chen said.

Chen said he enjoys the casual, relaxed ambience on food streets, where people can stroll, meet friends and taste interesting food. The Qibao Market has captured that feeling, he said.

“People chat while waiting in line for their dishes. Friends hang out over cups of beer. These are the things that make food streets so delightful,” Chen said.

Chen said he offers authentic Thai snacks at reasonable prices. Even during the market’s trial run, his stall was selling more than 100 bowls of tom yum soup every day. 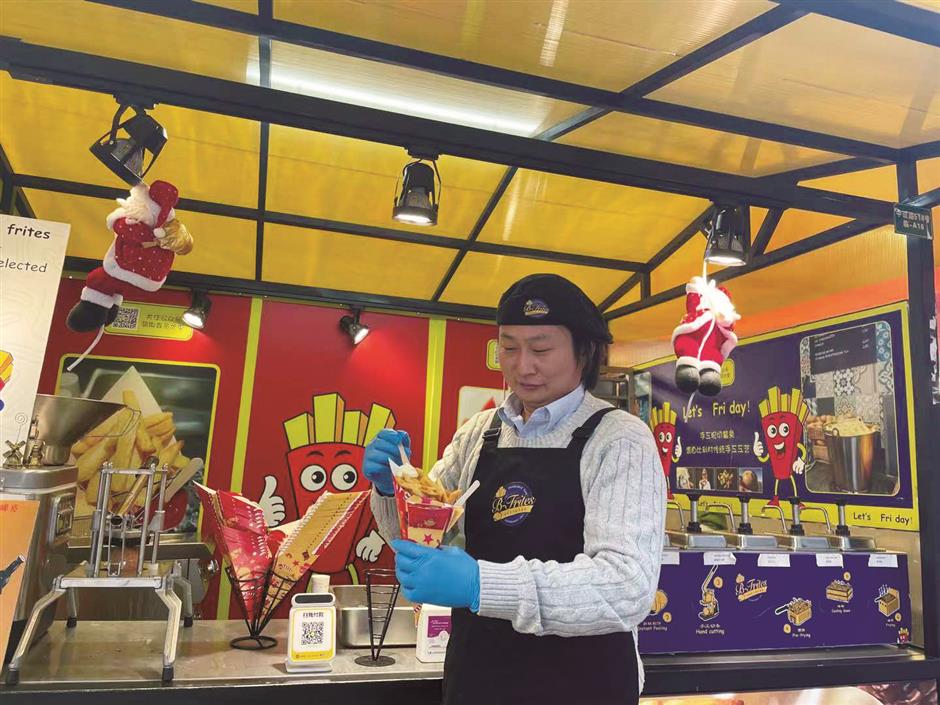 In 2018, Qiao toured through Belgium, Italy and the Netherlands and enjoyed the local dishes he found along his route, especially hand-cut French fries.

“I didn’t think the fries would be any different from others, but one bite changed my mind,” Qiao said.

“The potatoes are freshly peeled, cut and fried without additives, and customers can watch the whole process,” he said. “People usually consider fries to be unhealthy, but that’s not true.”

In March 2019, he opened a shop on Maoming Road S, where he sold a fries brand from Amsterdam. It was a success, with many repeat customers. That showed him that Chinese people love the fries as much as he does.

He opened a stall at a former night market on Anyi Road, and sales soared there, too.

“Now that urban management has been improved and street vendors aren’t allowed to open random stalls, night markets are supposed supplant them,” he said. “I firmly believe our stall at Qibao night market is going to be a success, too.” 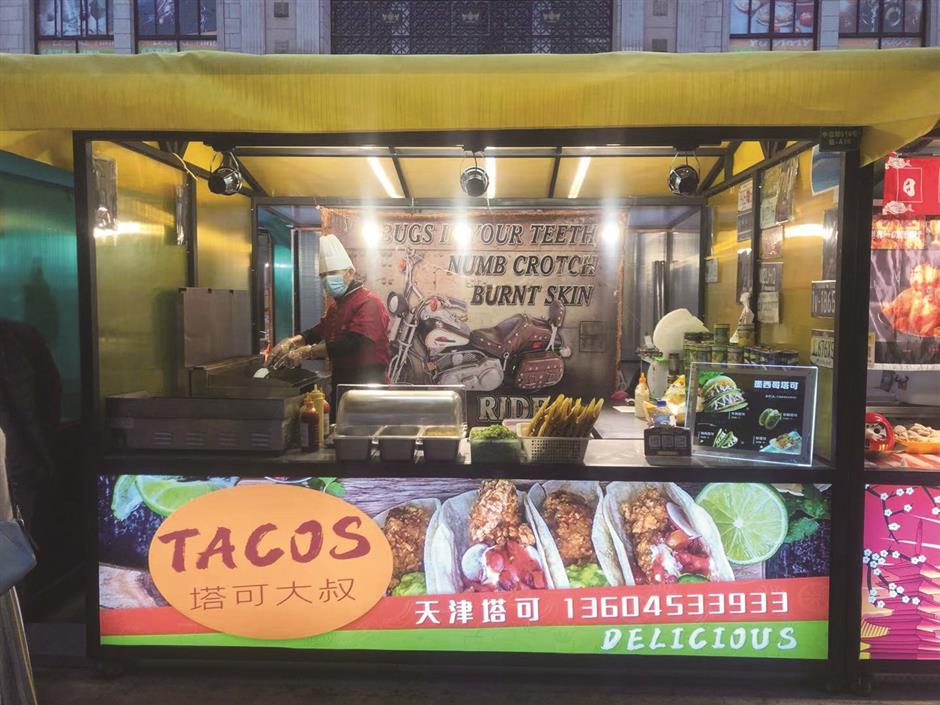 Li sells tacos at his night market stall. The Mexican-style shell filled with minced meat, cheese and vegetables add variety to the foods on offer there, he said.

Why tacos? Li said there was no specific reason.

“In the beginning, it was just about making a living,” he said, “but then I came to like the interaction with customers while they wait for their food to be done. We have conversations. Some tell me about their lives. I enjoy meeting them.”

Li said he loves the buzz of a busy market. Every day after closing his stall, he strolls around the market, tasting other specialties. 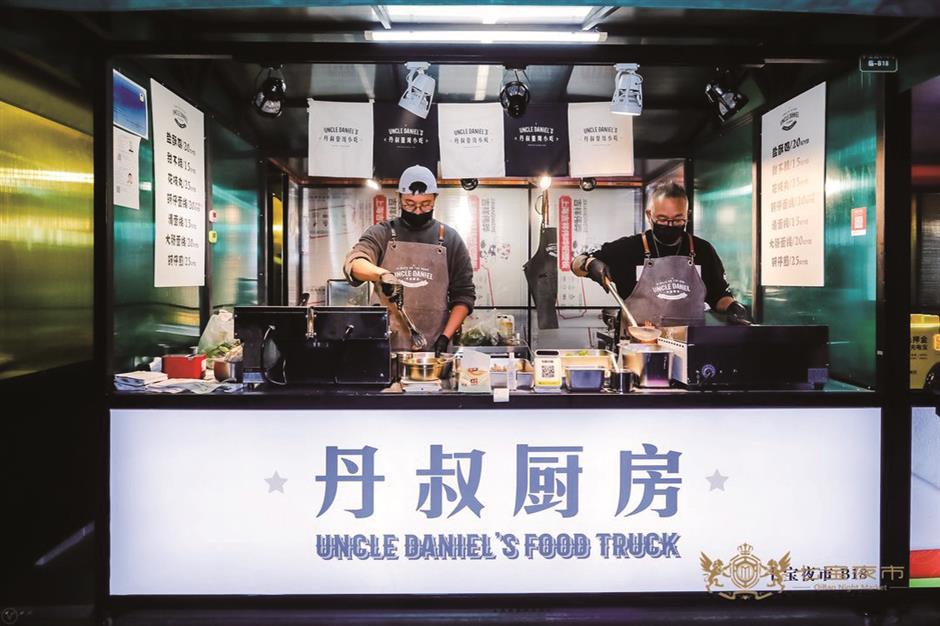 A vendor who goes only by the name Daniel sells food in a stall called “Uncle Daniel’s Food Truck.”

He said he has long contemplated getting into the dining business, but didn’t make a move until his modeling agency closed due to the coronavirus pandemic and a friend named Caper suggested the food truck idea.

Caper, he said, had four years of experience working in a kitchen in the Netherlands.

“We have more than the Taiwanese flavors, and we keep innovating our menu according to customers’ tastes,” Daniel said.