The Fourth Plenary Session of the 13th Chinese People's Political Consultative Conference (CPPCC) Shanghai Committee started on Saturday morning with a ceremony at the Expo Center.

It marks the start of this year's annual two sessions of the city's top political advisory body and legislative body. Hundreds of members of the CPPCC's local branch attended the ceremony.

This session of the CPPCC will run for four days and is scheduled to conclude on Tuesday. In the following days, local CPPCC members will discuss city affairs and make  proposals.

During the ceremony, Dong Yunhu, chairman of the committee, delivered a report which reviewed the major work of the 13th CPPCC Shanghai Committee's Standing Committee last year. It gave new tasks for this year, covering the Party organization, pandemic prevention and control as well as economic and social development, the city’s major strategic tasks and Shanghai’s reform and development.

"During this special year, we’ve unfolded a special performance and made positive contributions to obtaining major strategic achievements in fighting against the pandemic in the megacity and advancing stable and healthy economic and social development," said Dong.

According to Dong, in the great fight against the pandemic, they quickly set up special taskforces to formulate systematic work plans, specified detailed pandemic prevention and control measures, made overall plans, and orderly advanced pandemic prevention and control, together with function performance at the CPPCC, to ensure  targets were effectively delivered, on time

"We lost no time in issuing a notice to the CPPCC system and CPPCC members city-wide, demanding to give play to the effectiveness of the CPPCC system, strengthen the members’ awareness to shoulder their responsibilities, and contribute to winning the battle for pandemic prevention and control," Dong said.

"In particular, the CPPCC members of the Medicine and Health Sector actively responded to the government’s call and stood out, by either rushing to the front line to support Wuhan, or holding fast to their own posts to safeguard lives. They held on fighting on the main battlefield and forefront, serving as role models, with many touching stories."

Rough statistics show that more than 1,300 CPPCC members in the city have been working on the front-line fighting the pandemic.

The participating units of the CPPCC Shanghai Committee and the CPPCC members at all levels have donated more than 500 million yuan (US$77 million), raised more than 7 million pieces of medical masks and protective goggles, and donated medical equipment and medicines valued at more than 30 million yuan.

CPPCC members also conducted in-depth investigation and research, and provide targeted suggestions to assist in the stability of the economy and society as well as resumed development.

"We carried out special investigation and research, with intensive on-site visits to enterprises," Dong said.

The members of the Chair’s Council headed teams which visited more than 300 Chinese and foreign-invested companies to learn about their situation in pandemic prevention and control, resumption of work and production, advance the implementation of policies to stabilize, support and benefit enterprises, and coordinate efforts to solve  difficulties.

"We timely organized to conduct special investigation and research on the 'Impact of the Pandemic on Shanghai’s Economic Development and the Countermeasure Proposals', made an objective assessment and analysis of the industrial operation and economic situation, and put forward targeted opinions and suggestions on how to cope with the impact of the pandemic and stabilize economic development to the CPC Shanghai Municipal Committee and Shanghai Municipality," Dong said.

More than 6,700 relevant proposals and “Social Trends and Public Opinions” have been submitted.

A number of opinions and suggestions, such as improving the urban emergency management system, expanding the usage scope of Shanghai QR code, and setting up a consultation platform for fever, have been adopted by relevant departments and quickly transformed into detailed policy measures.

In particular, the proposal to practise an individual food-serving system and promote the use of serving chopsticks and spoons jointly put forward by more than 120 CPPCC members has played a positive role in advancing and shaping a civilized and healthy dining style.

Meanwhile, to strengthen the function of global resources allocation and the construction of key areas such as the Pudong New Area and Lin’gang New Area, they conducted in-depth investigation and research, carried out consultation and deliberation of political affairs, and proposed to deepen the connotation of the special economic function zones, build a financial development pattern integrating Lin’gang (offshore) and Lujiazui (onshore), and establish a financial service system compatible with new types of international trade.

To make the city a hatchery to foster scientific and technological innovation, they carried out special subject consultations on accelerating the construction of 5G application demonstration bases and giving play to the pioneering role of science and technology and industrial innovation.

"We put forward proposals to promote a virtuous circle and triangular interaction between finance, technology and industries, and make substantial progress in the integration of intelligent technology, modern technology and automation technology, and create a 'strong magnetic field' for high-level talent," Dong said.

Focusing on the integrated construction of the tourism market and services in the Yangtze River Delta and the implementation of the cooperation mechanism for joint pollution prevention and control in the delta, they conducted joint investigation and research and linked democratic supervision together with the CPPCC committees in Jiangsu, Zhejiang and Anhui provinces.

Attention was also paid to 20 special topics, including the high-quality development of elderly care services, construction of the demonstration villages for rural revitalization, construction of the riverside public spaces, grassroots community governance, food hygiene and safety, living conditions and employment of ethnic minority students, and the public welfare and charity in the religious community.   CPPCC members participated in inspection and supervision activities to effectively help address the challenges that involve people’s livelihood, including elderly care services, childcare and youth education, urban renewal and village revitalization.

Centering on 20 draft regulations in Shanghai in fields such as intellectual property protection, promotion of SME development, foreign investment, and public health emergency management, they organized CPPCC members to participate in legislative consultations, and put forward more than 1,200 opinions and suggestions, which strongly bolstered legislation in a scientific and democratic way.

"Concentrating on nine special subjects, such as strengthening the construction of public cultural service system and advancing the construction of teachers’ team, the members of the Chair’s Council took the lead in key proposals consultation and handling, and vigorously promoted the solution of a series of hot spots and difficult issues that people are concerned about and have high expectations for."

CPPCC members also provide opinions and proposals on scientific drafting of Shanghai’s 14th Five-Year Plan and cultivation of strategic advantages for future development. And they strived to unite people at home and abroad.

In the year of 2021, Dong said they will focus on a series of key subjects such as taking the initiative to integrate and serve the new development pattern by constructing the "Five Economies", optimizing the urban spatial layout with the construction of the "Five New Towns" as priorities, and comprehensively promoting the urban digitalization transformation targeted at building an international digital capital with global influence.

Li Yiping, vice chairman of the committee, addressed a report about their work on proposals. Last year, local CPPCC members had filed 1,027 proposals and 958 have been adopted by government departments with measures being taken. Another 41 are listed to work out a solution with another 119 kept for future reference.

By 9am on Friday morning, the Fourth Plenary Session of the 13th CPPCC had received 407 proposals from local political advisers with over 40 percent about the city's social construction and 39 percent about economic construction. 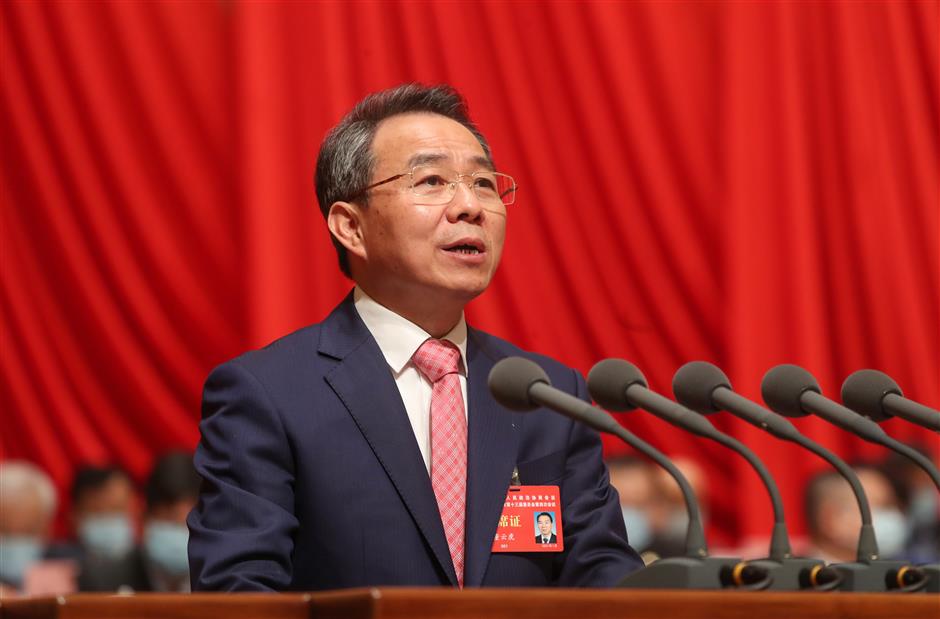