A new outlet of the famous “bear paw” café opened in Lujiazui in the Pudong New Area on Saturday morning. 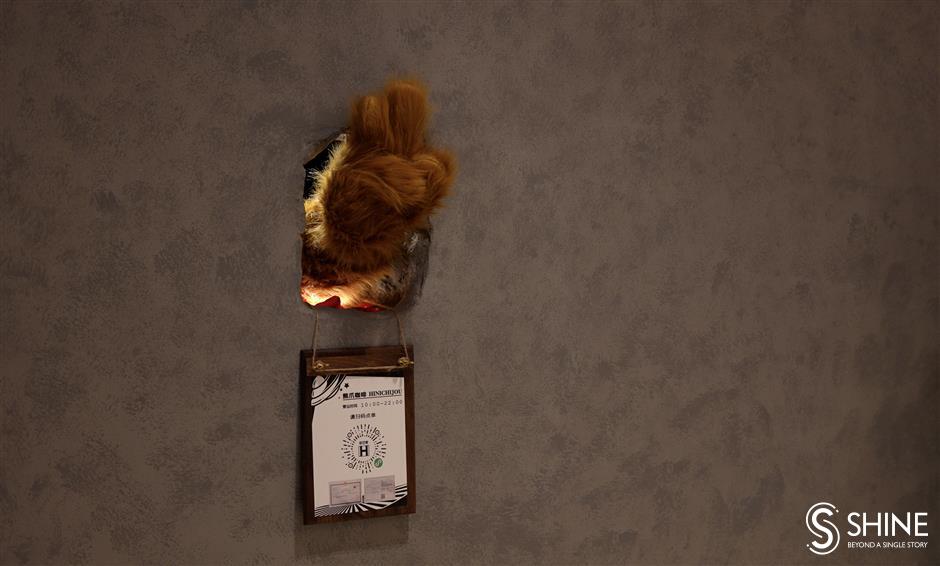 The new outlet of Hinichijou in Lujiazui of Pudong follows its trademark of serving drinks through a hole in the wall with a bear claw. Customers can scan a QR code hanging on the wall to place a coffee order.

The café, Hinichijou, which means extraordinary in Japanese, first sprang up on Wukang Rd in Xuhui District on December 3 — the annual International Day of People With Disabilities.

The café quickly went viral because of its creative operation mode. Instead of a traditional serving window, it serves coffee from a hole in a wall with a furry, paw-shaped glove.

Wang Haiqing, one of the café's three founders, said they developed the concept to protect their baristas, all of whom are people with disabilities, and raise public awareness of employment equity.

The new shop has added two more holes — one for takeout service and a lower one for children and people in wheelchairs.

It hired two more baristas, also impaired people, and four volunteers, friends of the owners, to support the new shop.

“We hire people based on their technique levels,” said Wang. “One of the new baristas has coffee-making experiences of more than eight years. We also train those who are less skillful.”

A boy waits for his coffee by the low level hole in the wall.

The new café has the support of the shopping center, Shimao 52+, where it’s located.

According to the mall, they have offered rent below average to assist its cause.

The unique decoration style of the café was also greenlighted, with special construction methods adopted during preparation to meet standards.

Its first outlet has drawn complaints of business disruption from nearby shops, as well as concerns over its licensing display.

According to Wang, the new outlet located in the mall will be easier to manage and provide a better environment for customers.

Its operation licence is also presented through a digital screen placed next to the café.

Some netizens also challenged the purpose of the café.

"Yes, let’s provide equal opportunities to the disabled but hide them behind a wall,” was a comment left on Instagram.

But Wang said the café sought to provide a "secure and comfortable place for the impaired to exert their talents."

“Our employees have their own way of interaction, such as taking flowers to customers who are also disabled, or communicating through Douyin (known overseas as TikTok)," he said.

Two other new outlets at People's Square and M50 are also expected to open before the Chinese Lunar New Year.