Renji Hospital's Puxi branch is functioning normally after it was locked down when a worker was diagnosed with coronavirus infection on Thursday.

It is the third day the hospital in Huangpu District is under closed-loop management.

Outpatient services have been suspended. Many doctors and nurses volunteered to return to the battlefield to treat patients in the hospital, although some of them didn’t have to be quarantined in their workplace but in a designated hotel, said Dr Yue Bing, deputy director of bone and joint surgery department, on Sunday.

A 64-year-old patient surnamed Li, who had knee surgery three days ago, said the medical workers are very kind.

Yue added: “All staff and patients are fighting the virus strenuously and we are looking forward to victory. So far, the physical and psychological conditions of all people staying in the hospital are steady." 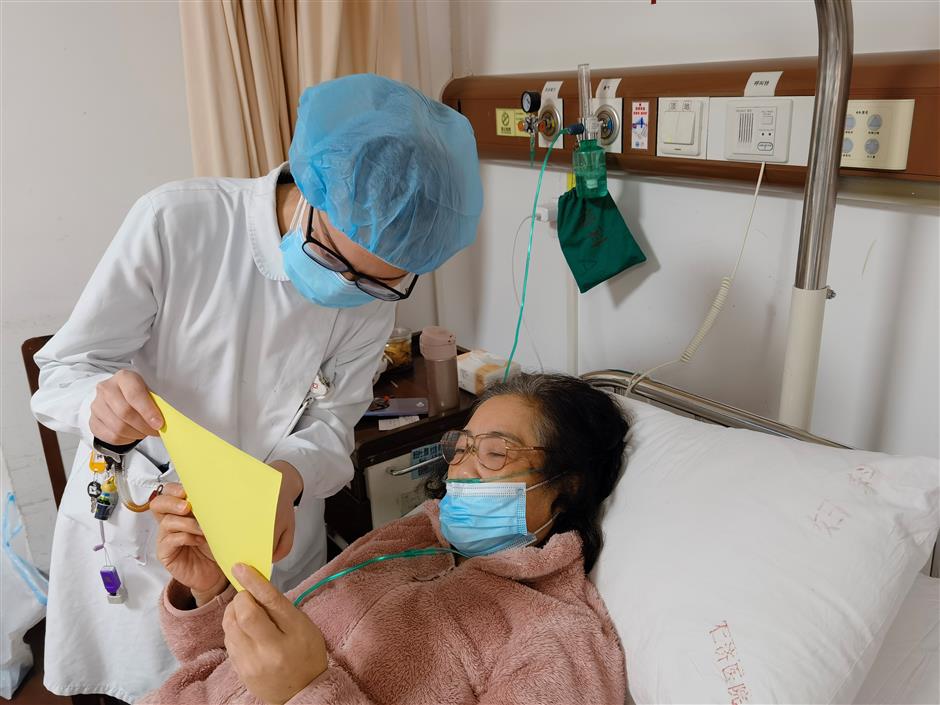 There are 16 inpatients for bone and joint surgery department, with half over 60 years old. Some are quarantined alone without their family members or friends.

To relieve these people’s stress, medical workers explained the situation promptly on Thursday, the day the hospital was locked down.

“We told them that four doctors and seven nurses will take care of them 24 hours a day,” Yue said. “Normally, one or two doctors are enough to treat the 16.

“Now they can easily find us when they have problems because we stay in the ward, sleeping on hospital beds. To some extent, they have better care than usual.”

Fu Zhiwei, a 25-year-old therapist, is one of the volunteers who chose to stay in the hospital for rehabilitation therapy.

Under his help and other medical workers’ care and attention, an 80-year-old patient can do some simple exercises in the ward after she had total knee replacement surgery a week ago.

“It is rare that a patient can recover in such a short time,” Yue said. 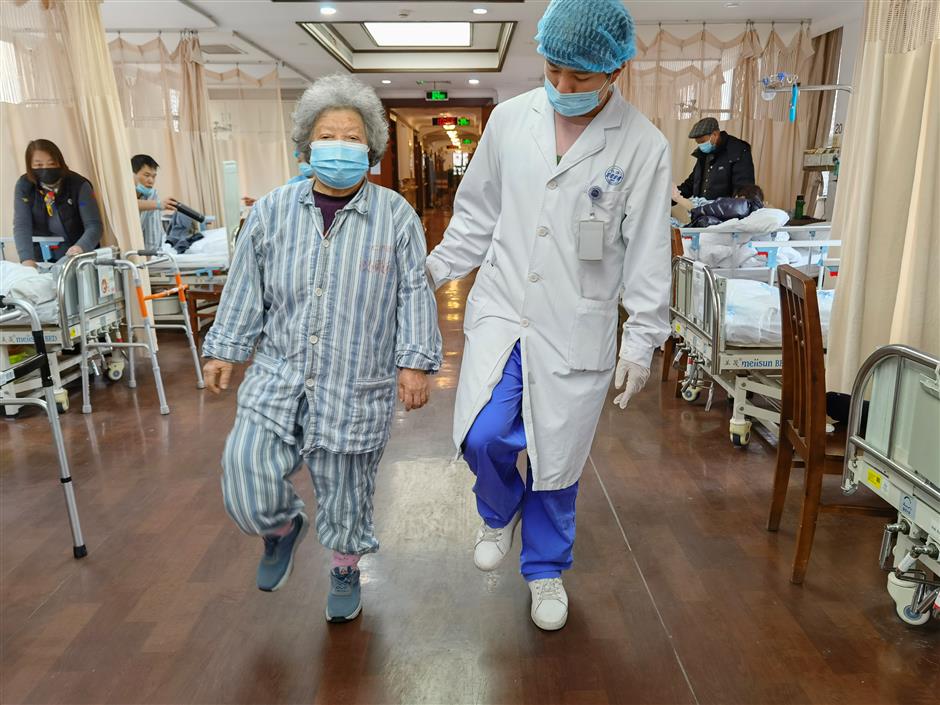 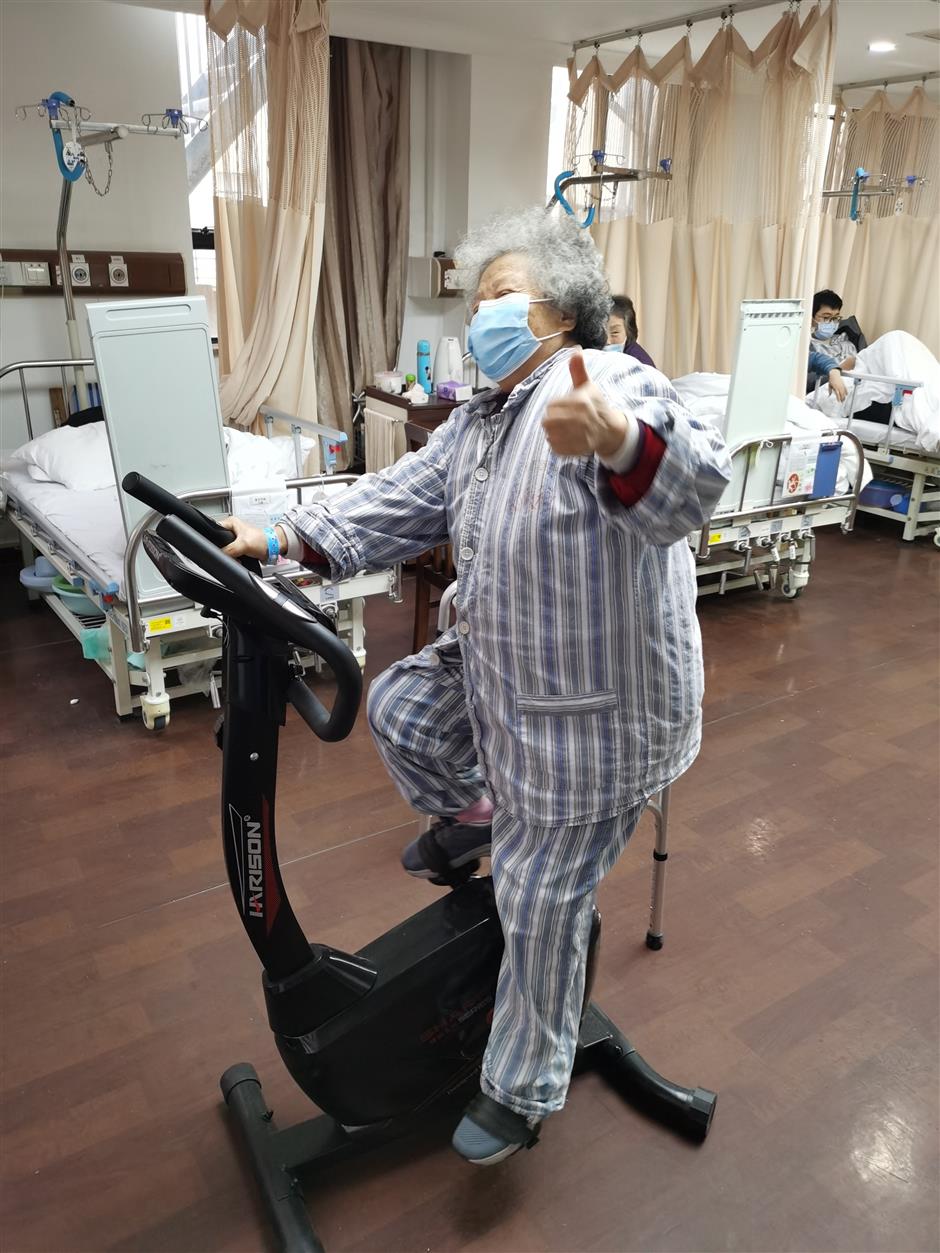 The 80-year-old patient does rehabilitation training.

The emotions of the patients’ families, who cannot visit the hospital, are also stable because they can chat with the patients and ask questions of doctors via mobile phones, he said. Items that patients need such as cloth and daily necessities, can be transferred by the quarantined staff through the hospital entrance.

“Their family’s steady emotion is very important to the quarantined patients,” Yue said.

Medical workers have prepared for the unknown which might happen during the following days for quarantine, Yue said.

At the Shanghai Cancer Center's Xuhui branch, more than 4,000 quarantined medical workers are supported by a volunteer group with 20 people from the hospital’s different departments.

The hospital has been under closed-loop control since the same day as Renji Hospital for the same reason.

Food for medical workers is sent by a volunteer group to the Shanghai Cancer Center's Xuhui branch on Sunday.

The food is delivered.

Usually hospital staff go to the canteen to eat and patients' food are sent to some 10 workers. But now, the medical workers cannot leave their office zones for eating in order to prevent cross-infection.

To ensure each hospital staff member can have a hot meal in time, the group was organized on Friday and many Wechat groups for each building and each floor were created.

Every day since , their work has begun. The numbers of people who need to have a meal will be collected via the social media platform and all food will be put into insulated trolleys. When the food is coming, the leader of the floor will be notified.

“Our three meals per day have been guaranteed. Thank you for your care, encouragement company,” Sun Zhirong, a doctor for the  department of the hospital, said on .