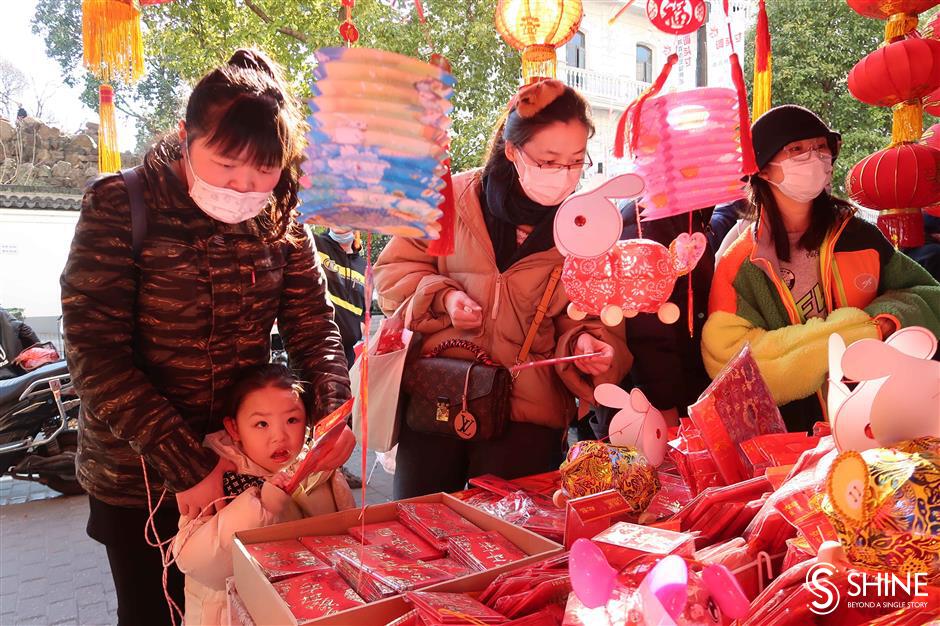 Customers visit a popular mall on Fuyou Road near the Yuyuan Garden Malls during the holiday.

Shanghai's tourist attractions and cultural venues have received more than 2 million visitors during the first three days of the Spring Festival holiday, with strict COVID-19 prevention measures in place.

The attractions and venues welcomed 2.27 million visitors between February 11 and 13, according to the Shanghai Administration of Culture and Tourism.

Popular sites, such as the Yuyuan Garden Malls and Shanghai Museum, have seen a large number of tourists during the holiday after governments at all levels encouraged people to stay where they are to curb the spread of COVID-19 this year.

During the holiday, running through February 17, a total of 130 A-level tourist attractions, 81 museums, nearly 30 art galleries, 15 theaters and 234 libraries, cultural pavilions and community-based cultural activity centers across the city are open as normal to meet the rising demands of citizens and tourists.

Many were attracted by the intangible cultural heritages and folk cultures at local ancient streets and towns. Traditional lanterns and art installations at the Yuyuan Garden Malls, for instance, have attracted long lines of visitors. The authority has set up temperature checkpoints and limited the number of visitors to avoid gathering of crowds and ensure safety.

Ancient towns in the city’s outskirts, including Fengjing in Jinshan District, Zhujiajiao in Qingpu, Xinchang in Pudong and Luodian in Baoshan, have jointly launched a campaign to invite citizens to experience the traditional way of Spring Festival celebrations.

Local cultural venues have also become popular during the holiday. Theaters are full and museums have received a great many local families with children. The 1920s Tianchan Yifu Theater on Fuzhou Road, for instance, reopened on Friday after a major facelift. Cultural relics related to the Year of the Ox and Chinese zodiac art are exhibited at the Shanghai Museum.

Local heritage skills such as farmer’s paintings and bamboo-carving are being showcased at the China Art Museum. Sixty local bookstores are also hosting more than  80 public welfare events to promote reading among locals during the holiday.

Tourist attractions, resorts and theme parks remain the top destinations for both citizens and tourists. Shanghai Disney Resort is hosting a series of festive activities through February 26, or the Lantern Festival.

Visitors to the resorts are able to enjoy traditional Chinese performances and cuisines fused with Disney elements as well as traditional activities including dough figurine making, paper-cutting and shadow puppetry.