A tale of two buildings at Fudan University 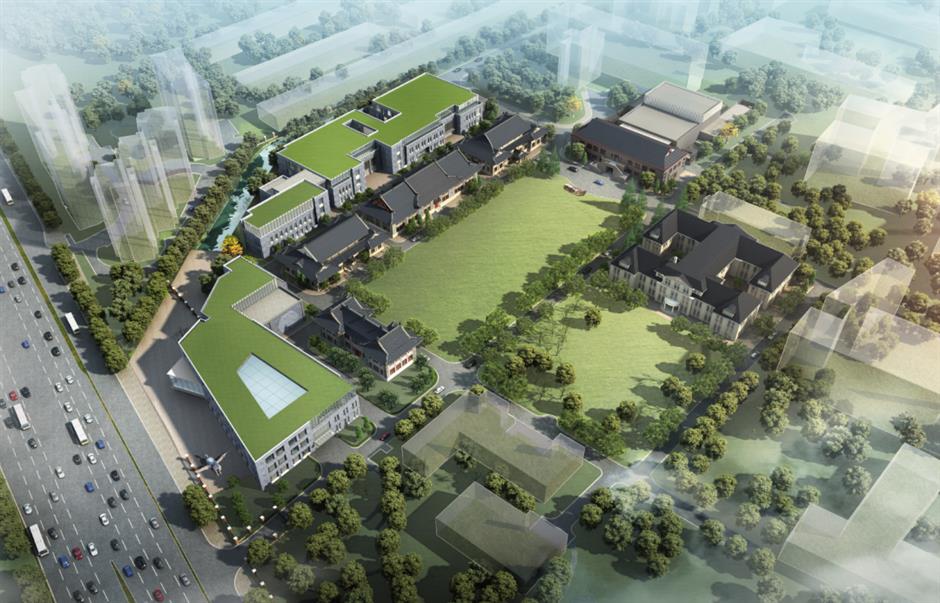 The layout of the historical buildings around Xianghui Grand Lawn.

Two nearly century-old buildings at Fudan University are being refashioned to their original appearance, along with construction of a station named after the university on Metro line 18.

The project on the No. 100 and No. 200 buildings on campus began in 2017 when the construction of the Metro station in front of the university was expected to influence the two structures.

Also, construction of the university’s Chinese civilization resource center will be completed this year.

The two buildings are located on the west side of the university’s Xianghui Grand Lawn.

The No. 200 building, between the No. 100 and No. 300 buildings known as Xiangbo Hall and Choi Koon-shum Humanity Center, was built in 1922. Li Denghui, the first president of Fudan, traveled to Southeast Asia to raise funds and received a donation from two brothers for construction of the building – Chien Chao-nan and Chien Yii-chieh – founders of the Nanyang Brothers Tobacco Company. In their honor, the two-story brick-wood building was originally named Chien’s Hall.

Designed by American architect Henry Killam Murphy, it was the university's largest construction project, featuring a Chinese roof, overhanging eaves and Western walls. Both Li and Murphy were alumni of Yale University. Murphy designed many buildings at Chinese universities.

In 1937, the building’s roof was blown off when a dorm and an indoor stadium were razed to the ground by Japanese military aircraft.

Later, the university moved to Chongqing and the campus was seized by Japanese invaders and the puppet government led by Wang Jingwei. The building was repaired with simple tiles.

The university’s faculty and students moved back to Shanghai in 1945 after the Japanese were defeated. The next year, the building was renamed the Chao-nan Building in honor of the donor. Following the city's liberation, the university renamed every building on campus and the building was numbered 200. 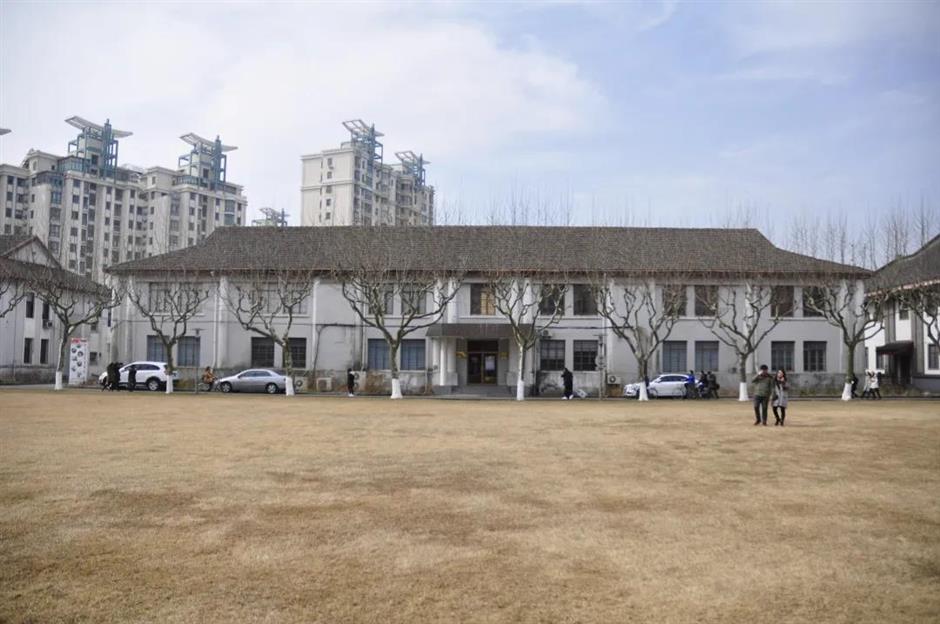 The No. 200 building prior to renovation.

The No. 200 building during renovation

According to archive photos, the No. 100 building was built in a similar style to No. 200 but was also destroyed by Japanese bombs. Though repaired several times, it was no longer as splendid as its original design.

After the founding of the People’s Republic of China, the two buildings became important venues for teaching and scientific research. Their interiors were renovated several times, most recently in the early 1990s with funding from the National Cultural Heritage Administration.

In 2005, Fudan's 100th anniversary, university officials planned to renovate the school's historical buildings and transform the area into a grand museum. 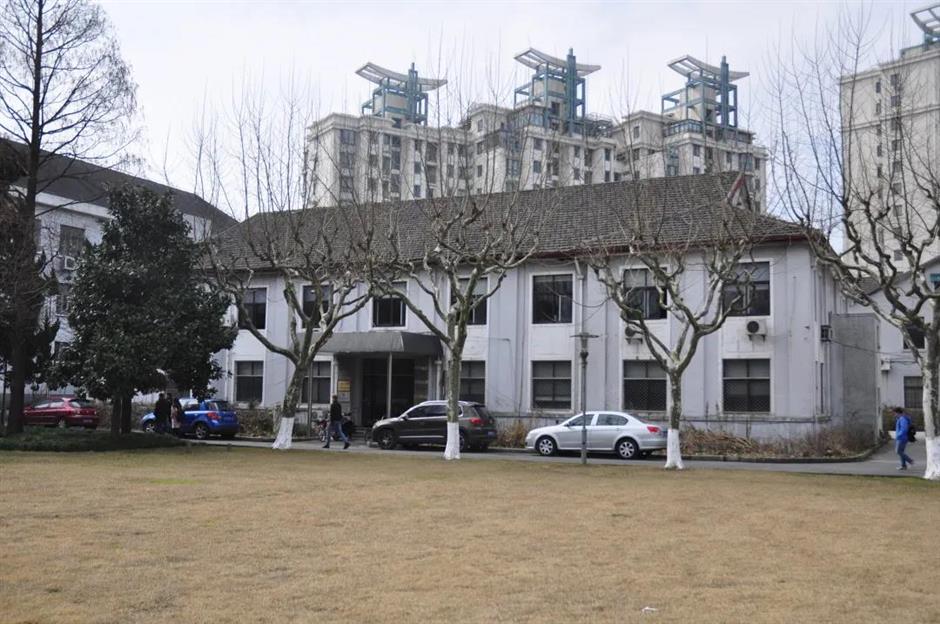 The No. 100 building prior to renovation

Lu Jiansong, dean of the department of cultural heritage and museology, proposed that the university designate the area with old buildings as an exhibition space for historical relics.

“This is the root of Fudan,” Lu said.

The university accepted his proposal and authorized him to guide the renovation of building No. 750, which was an office building for the school of economics and is now the university’s museum of history.

That same year, Choi Koon-shum, a member of the university council, donated funds for the renovation of building No. 300.

However, buildings No. 100 and No. 200 were still ageing, so the university decided to rebuild the structures above the Metro station when the city launched the first phase of construction on Line 18.

The top of building No. 100 was sealed recently.

The originally planned route of Line 18 passed beneath the historical protection zone around Xianghui Grand Lawn, which would affect the security of Xianghui Hall, the Zibin Building and the university’s history museum – all of which are under protected status in Yangpu District.

The route was later adjusted to protect the area and buildings.

In 2018, the city issued new policies that banned the dismantling of well-preserved historical buildings more than 50 years old. As such, cultural heritage protection experts proposed moving the buildings N0. 100 and No. 200 and returning them to their original locations after Line 18 construction wrapped up. 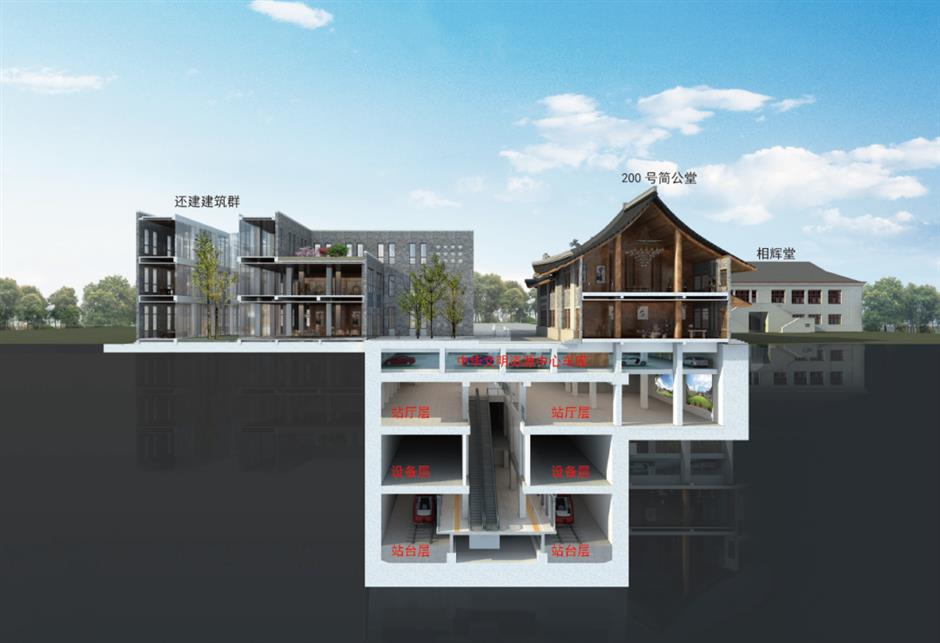 “Actually, the two buildings were no longer as they originally appeared after Fudan moved back to Shanghai from Chongqing,” Lu said. “An investigation found that only the wall base and some of the walls were original while the roof and the interior had already been changed.”

He proposed rebuilding the two buildings according  to their original appearance, and exhibiting photos of them during different time periods.

His idea was approved but there were precious photos of the buildings.

“We’ve tried our best to restore their original look by checking historical photos, documents and structures built during the same period,” said Lu Tan, senior engineer with the university’s infrastructure department. “Professional housing inspection agents have inspected the buildings thoroughly and their reports and blueprints were used during construction.”

During the process, workers carefully dismantled the buildings and stored walls, roofs and other parts for reuse during construction. The old walls will be used to decorate the outer walls of the new buildings to maintain their historical appearance.

An artist's rendition of historical buildings around Xianghui Grand Lawn.

The university also adjusted the function of the area in its development plan. Originally, the buildings were used for both teaching and logistical support. In the future, they will become a Chinese civilization resource center.

The new center will including the five buildings around Xianghui Grand Lawn – buildings No. 100 to 300, Xianghui Hall and the university's museum of history – as well as new buildings built behind them.

“We wish not only to respect history and restore the original appearance of historical buildings, but also let them serve new functions in the new era,” said Lu.

According to the university, people will be able to see many exhibitions, cultural relics, archives and innovation achievements in the area in about a year.