A mother helps her son with his uniform at Shanghai Huangpu Luwan No. 1 Central Primary School in Huangpu District today.

As the new school semester began today, students from local primary, middle and high schools returned to their classrooms after the winter holiday.

At Minhang Experimental Primary School's Chuncheng Campus, many students dressed up in traditional Chinese outfits instead of school uniforms.

Teachers dressed in red greeted them, holding ox dolls to mark the Year of the Ox.

At the entrance gate, a temporary wall was erected with decorations such as balloons and figures of lions and children.

Zhang Jun, principal of the campus, said students were told to record happy moments with their families and explore traditional Chinese culture during Spring Festival. 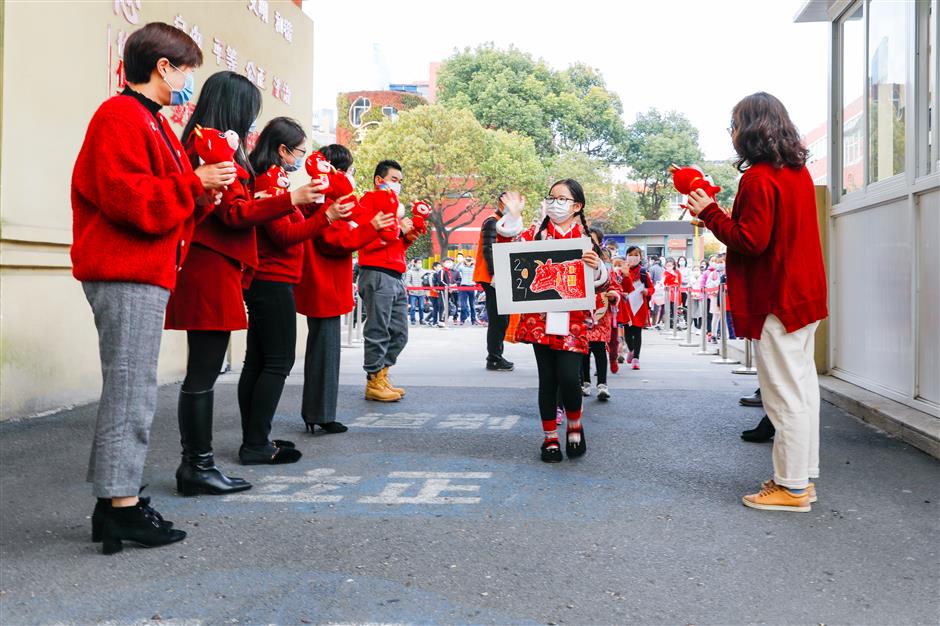 “On the first school day after the winter break, we allow students to wear festive clothes and share their memories and findings with classmates," Zhang said. "They can also bring festive items to decorate their classrooms."

Zhang said the celebration will continue the entire week until Friday's Lantern Festival, when students will be encouraged to express their best wishes for teachers and classmates via cards, lanterns and clay soup balls.

The first day back included the customary class on public safety presented by the Shanghai police. 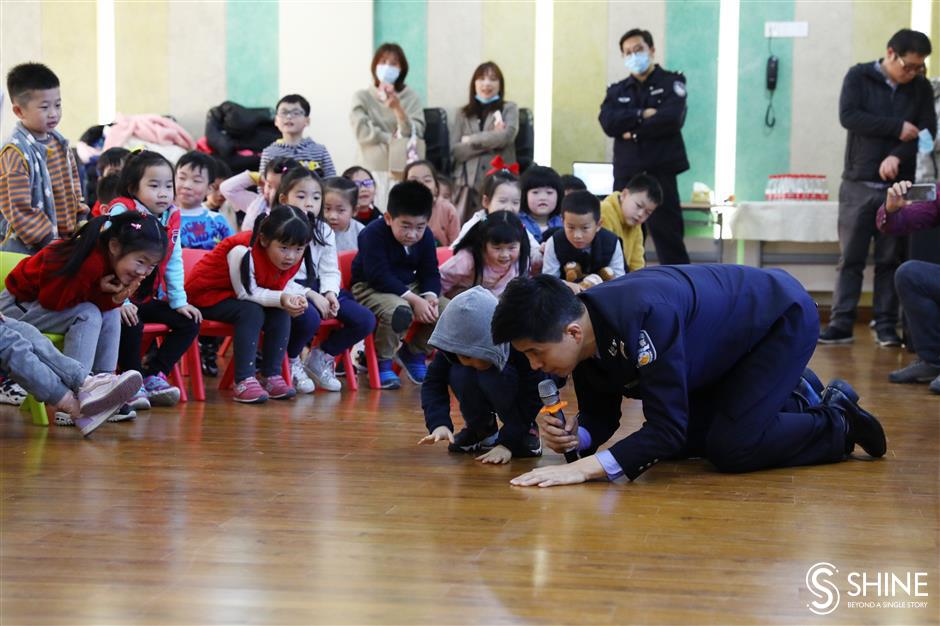 Through interactions and games, Huang advised students to look out for cars when crossing streets and avoid taking elevators if a fire breaks out.

“We try to impart useful information to students in an interesting way through friendly dialogue,” he said.

Traffic is usually busier on Monday mornings, especially on parts of the North-South Elevated Road.

Around the city, police officers and their assistants ensured student safety around schools, as well as carrying out safety inspections of school buses.

In Huangpu District, police have asked school officials to file daily reports regarding the health status of security guards working in their institutions to curb the spread of COVID-19. 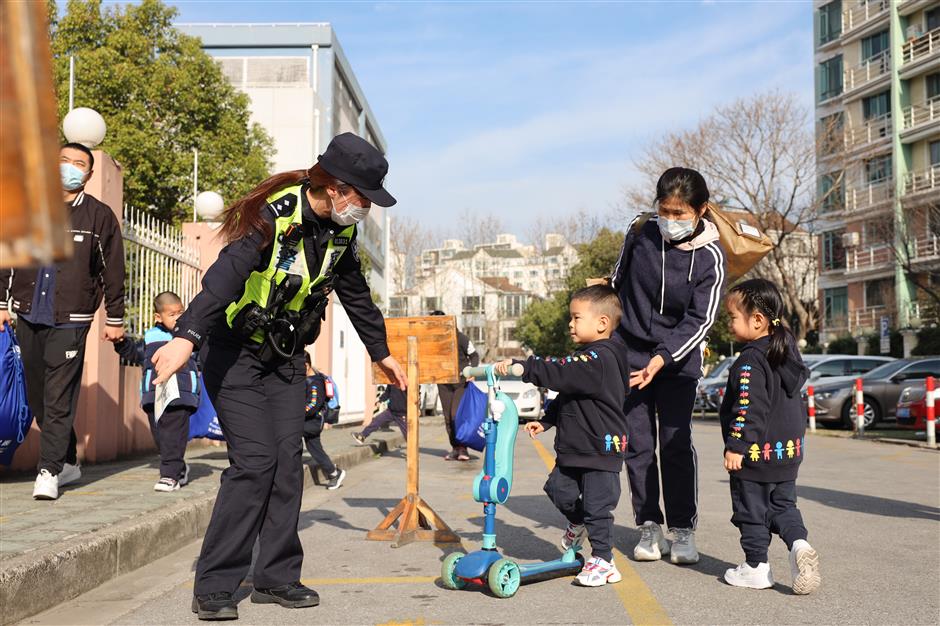 Although the local government appealed to residents not to leave the city unless absolutely necessary due to the pandemic, students from Shanghai Huangpu Luwan No. 1 Central Primary School enjoyed a full and happy holiday.

A third-grade student’s mother surnamed Zheng said her family normally travels around China or abroad during the holiday to expose her child to the world but did not this year.

“Many people normally leave the city during the holiday for family reunions." Zheng said. "However, doing so would have increased the risk of infection, so we took our son to many local places during the 30-day holiday — including Shanghai Disneyland and the Shanghai Science and Technology Museum."

Many non-Shanghai-native families chose to visit their family members and friends online during the holiday, and Luwan's headmaster Wu Rongjin said the majority of students from these families stayed in the city. 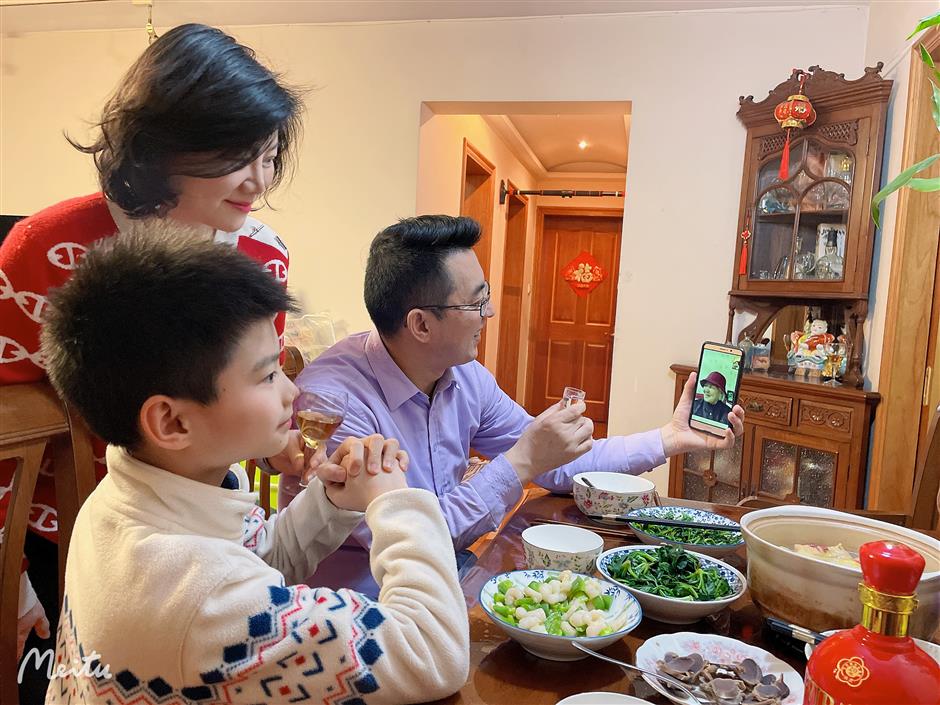 Fourth-grade student Ma Jingding and his parents on a video call with his grandparents who live in Lanzhou, Gansu Province, during Chinese New Year's Eve dinner on February 11.

Fourth-grade student Ma Jingding said he and his parents had a video call with his grandparents who live in Lanzhou, the capital of northwest China's Gansu Province, during nianyefan (Chinese New Year's Eve dinner).

“My parents and I always go to Lanzhou to celebrate the festival with my grandparents, but this year we couldn't,” Ma said. “I totally understand because my father told me we should sacrifice for others to prevent the spread of the virus.”

Some students did something heartwarming for school workers who had to stick to their posts during the festival. First-grade student Wang Yuqing wrote fu characters and made four boxes of tanghulu, or crispy sugar-coated haw, for them.

“My mom told me this snack is a traditional Spring Festival snack, so I made some for the staff to let them feel warmth and love,” Wang said. 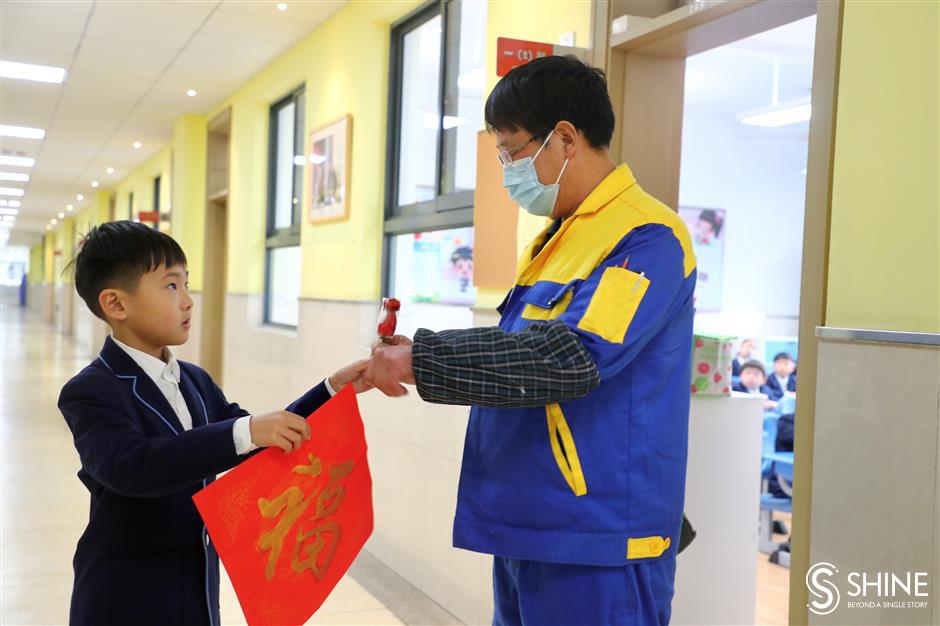 First-grade student Wang Yuqing gives a red piece of paper inscribed with the Chinese character fu, or fortune, as well as tanghulu, or crispy sugar-coated haw, to a maintenance worker at his school who wasn't able to go back to his hometown during Spring Festival.

Eight students cooked more than a dozen dishes — including four appetizers, nine hot dishes and two desserts — for 22 of their school's staff members who weren't able to return to their hometowns for the holiday.

“I prepared diced beef with black pepper because it's the year of the OX,” fourth-grader Sun Jiashang said. “I wanted to give them my best wishes and thank them for everything they do for us.” 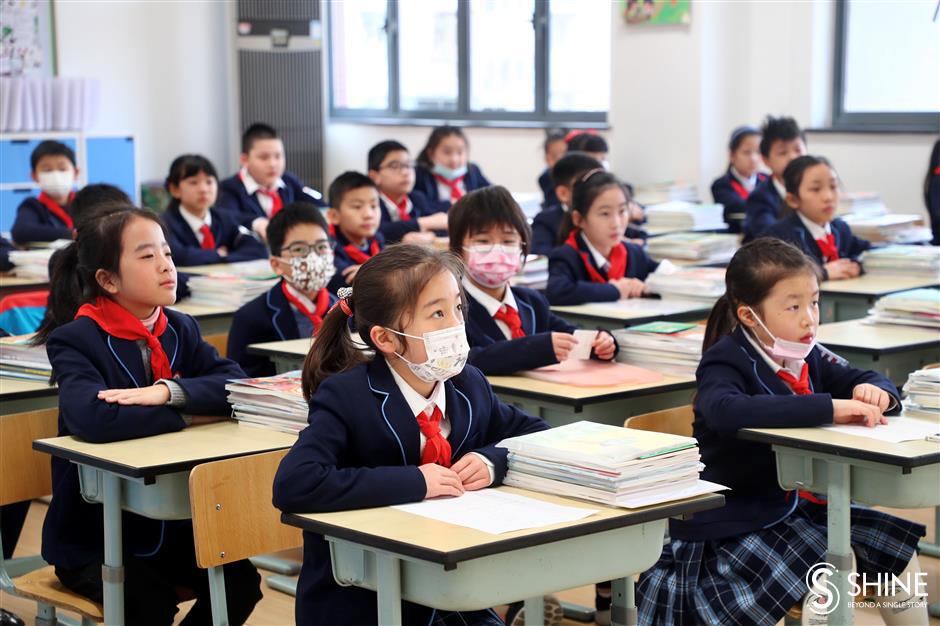 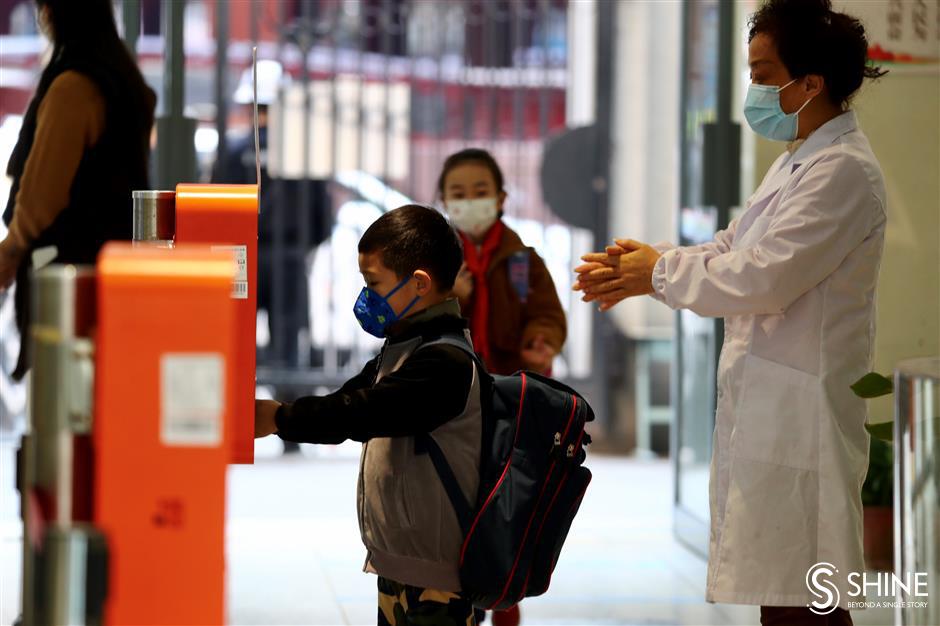 A student disinfects his hands before going to class today. 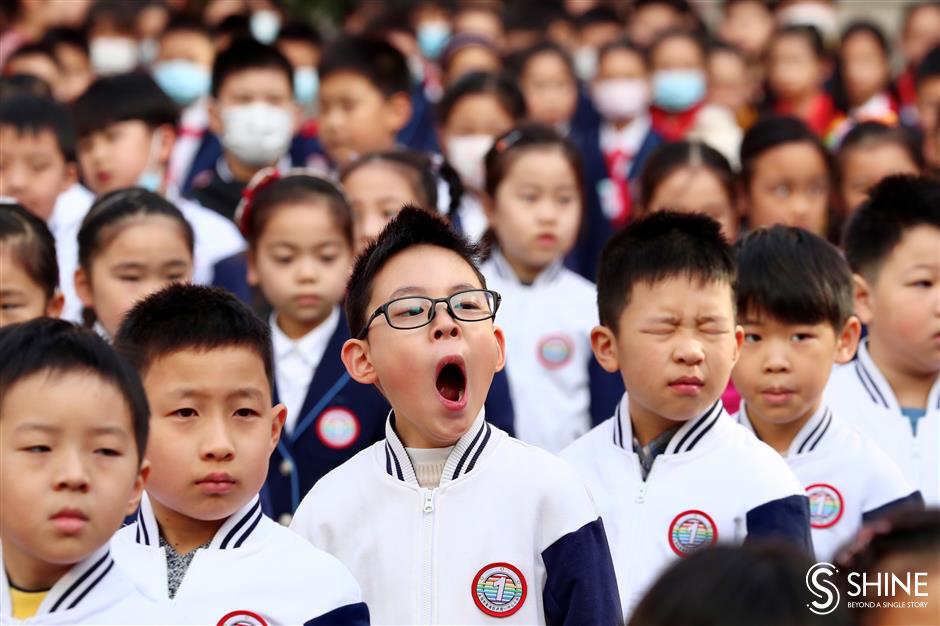 Students look on during today's flag-raising ceremony at their school in Huangpu District.