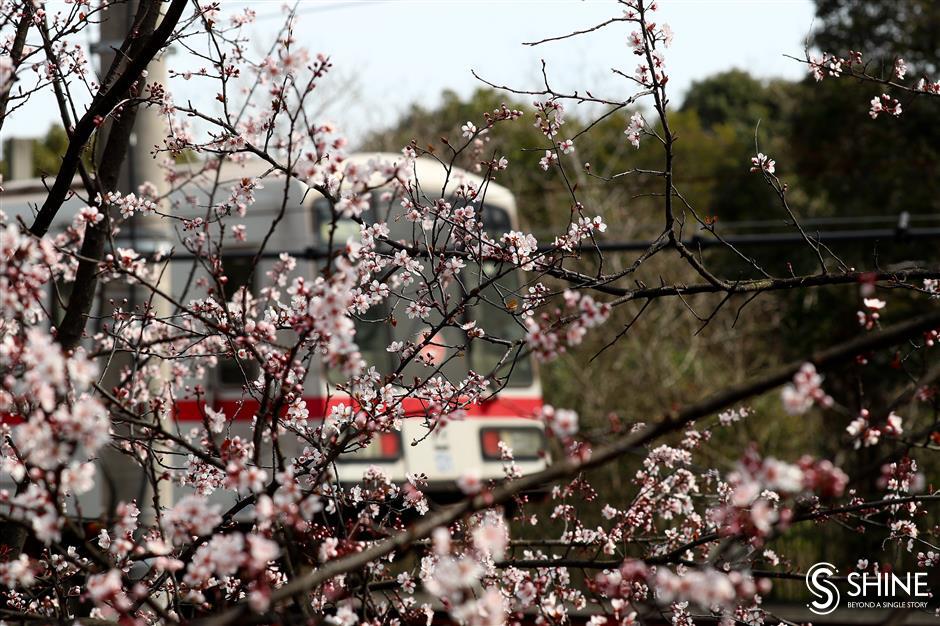 A Metro train drives past blooming plum trees in Shanghai on February 23, 2021.

Unusually high temperatures on Monday forced Shanghai residents to put on T-shirts four months before the arrival of summer, albeit temporarily.

Affected by the warm weather, the cherry blossom in Shanghai had already bloomed on Monday, 10 days ahead of the predicted flowering season, attracting many flower viewers and shutterbugs.

Kong Chunyan, chief forecaster of the Shanghai Meteorological Service, said the region around Shanghai was dominated by a strong warm-air mass, while the cold air from the north was too weak to penetrate south.

However, the record high temperature proved short-lived. The meteorological service issued a blue gale alert at 1pm as temperatures in suburban Shanghai, including Chongming and Baoshan districts, plunged by over 9 degrees Celsius in the afternoon.

According to the forecast, Shanghai will be cloudy and windy on Tuesday, with the temperature between 8 and 12 degrees Celsius. The city will see overcast and rainy weather for nearly a week from Wednesday.

"Please put on the overcoat you just took off," the meteorological service said in a notice to the residents.