Marking 100 Years of Communist Party of China
Provided by Xinhua.

In downtown Shanghai, a historic alley house with a brick and timber structure often catches the eye of passers-by.

The road where the house is located has turned into a bustling commercial street, but many visitors travel here especially to see the old building. The historic house is where the first national congress of the Communist Party of China was held in 1921.

The site, now a memorial for the historic moment, is currently under renovation and will be reopened in the run-up to the centenary of the CPC, the largest political party in the world with over 91 million members, in July.

"The CPC was founded when China was still beset by warlords and the plundering of Western powers... and Marxism was burgeoning among young aspirants with ambitions to save the country from an abyss of tremendous chaos," said Jin Chongji, a leading expert on CPC history study.

Since the founding of the CPC, China has undergone great changes. 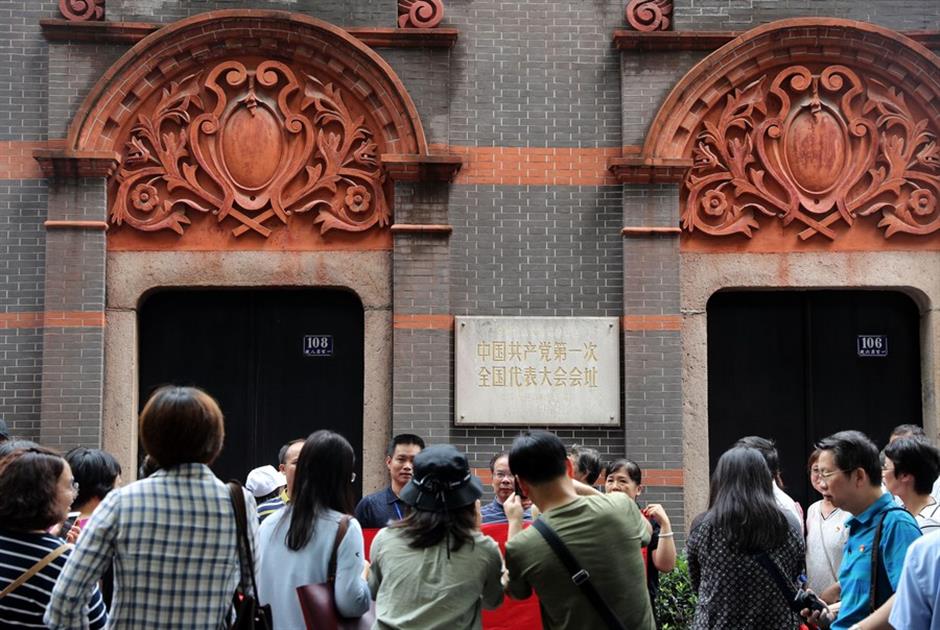 Visitors pose for a photo at the site where the first Communist Party of China National Congress was held in 1921, in Shanghai, east China on June 27, 2019.

It is near noon. Jiang Youwen, 53, feeds his chickens and rides his motorcycle to the bamboo grove in Guanjiang Village, Liuzhou City, south China's Guangxi Zhuang Autonomous Region.

"It's not yet the season for bamboo shoots, but I need to cut down some old shoots to make room for the new ones, or their quality will slip," said Jiang while shuttling through the bamboo forests.

Jiang, like most of his fellow villagers, used to live in absolute poverty. Generation by generation, their attempts to improve their lives were frustrated by the rolling hills. Even a walk across the village would require trudging along a 2-km mountainous road.

Jiang has eight siblings, making the family the biggest in the village. "But starvation is still the most profound memory of my childhood," he recalled.

"Our staple food was a small amount of rice mixed with cassava and sweet potato flour, and we only had two meals a day," he said. "The only luxury lied in a creek, where we caught small fish and shrimp in summer."

Poverty has troubled China for thousands of years. The CPC's doctrine is to enable the people to live a better life.

The life of Jiang's family began to improve after the Party started a reform and opening-up policy and launched rural reforms in 1978 to boost productivity and help hundreds of millions of people shake off poverty.

Over the past 40-plus years of reform and opening-up, more than 700 million people in China have been lifted out of poverty — more than 70 percent of the global reduction in poverty.

The poverty reduction went into a new phase when a "targeted policy" was introduced in 2013, which demands local authorities to tailor relief measures to local conditions — a guiding principle in China's move to eradicate absolute poverty.

Party officials were dispatched to villages to drive the anti-poverty campaign. Funds were allocated, industries developed and relocations carried out on an unprecedented scale.

It never occurred to Jiang that the common local snack Luosifen, a rice noodle that is known for its pungent smell derived from pickled bamboo shoots, could generate a decent living for his family.

In 2015, an industrial conference on Luosifen was held by the local government to boost its mechanized packaging and market recognition.

The noodles were also exported to over 20 overseas markets, created more than 250,000 jobs and have driven the development of upstream and downstream industrial chains in areas of agriculture, food processing and e-commerce, among others.

"The price of bamboo shoots used to be just a few cents per kg, now the price has appreciated several times over. We can make 15,000 yuan a year merely by selling bamboo shoots," said Jiang, adding that they had not only shaken off poverty but have also built a two-story house and bought a car.

Similar success stories have been repeated among millions of poor families nationwide, even those living in extremely harsh environments.

Under the leadership of the CPC, all of China's nearly 100 million impoverished rural residents living below the current poverty line shook off poverty after eight years' efforts. All 832 poor counties have now been lifted out of poverty.

Feeding one-fifth of the world's population and letting them live a well-off life is just one of the miracles the CPC has achieved in the past 70 plus years since it began to govern the country. 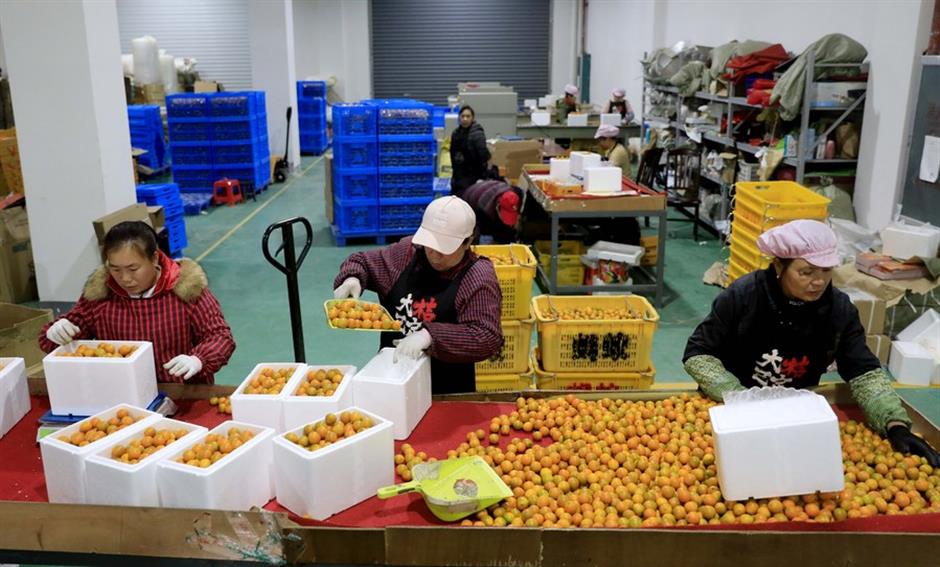 In 1949, as one of the first students majoring in aviation at Tsinghua University, Cheng Bushi was at the parade marking the founding of the People's Republic of China, where he brought a lantern in the shape of an airplane.

"None of the 17 airplanes at the parade were made in China," he recalled. "Tears trickled down my face when I heard someone shouting at us 'You guys have to make a real plane!'"

Cheng later became one of China's first aircraft designers and participated in the design of China's first jet plane. On May 5, 2017, the domestically-made C919 large passenger plane successfully made its maiden flight.

"The CPC has attached more importance to scientific research than ever before, and we've built a solid technical foundation and talent pool over the past decades. The huge progress we've made in the aviation industry was promoted by the painstaking efforts of several generations of Chinese scientists," said Cheng.

Now China is endeavoring to be a leading player in technology, its self-developed BeiDou Navigation Satellite System is in operation and the Five-hundred-meter Aperture Spherical Radio Telescope (FAST), the world's largest single-dish radio telescope, will be available for global service from April 1.

The nation's high-speed railway in particular has become a symbol of "China speed" in modernization.

"I can buy a bowl of cooked wontons in Changzhou and it is still warm when I arrive back home in Nanjing," said Qu Junjie, a high-speed train driver on the 200-km Changzhou-Nanjing railway line in east China's Jiangsu Province. Operating trains along the route runs in Qu's veins, as his father once drove diesel locomotives between the two cities, while his grandfather operated the earlier steam trains.

China aims to build itself into an innovative nation by 2020, an international leader in innovation by 2030 and a world powerhouse of sci-tech innovation by 2050, according to a national strategy blueprint published in May 2016.

China has risen from a poor and backward nation into the second-largest economy in the world as its GDP exceeded the 100-trillion-yuan threshold in 2020, an incredible transformation from the 67.9 billion yuan registered in 1952.

Given the global stagnation caused by the COVID-19 pandemic, China, which saw its GDP increase 2.3 percent year on year in 2020, is expected to be the only major economy to post growth in the pandemic-ravaged year.

Having long been an agricultural country with the majority of the population working as farmers, China, in the early 1950s, only had about 180 million people employed, and of them just 8.3 percent worked in urban areas. In 2018, the urbanization rate of China's permanent residents had reached 59.58 percent, according to data from the National Bureau of Statistics.

The "growth miracle" was attributed to the long-term plan in governance, the principle of "serving the people" and a suite of pragmatic growth-oriented policies, according to Liu Zhexin, a professor with China Executive Leadership Academy based in Pudong, Shanghai.

With a slew of epoch-making policies such as the reform and opening up, free trade zones and the initiative to embrace an open and fair global trade system including the World Trade Organization, China has become a leading global manufacturer and a major trading partner of about 130 countries and regions.

A World Bank report estimated in 2019 that, if fully implemented, transport projects under the Belt and Road Initiative could increase global real income by up to 2.9 percent and help lift 32 million people out of moderate poverty.

As China effectively controlled the COVID-19 epidemic domestically, the country has provided assistance to over 150 countries and 10 international organizations to help fight the unprecedented pandemic, and its self-developed vaccines will also be a public good.

While maintaining China's position as a major global growth engine, the CPC sticks to a new philosophy of innovative, coordinated, green, open and shared development.

From this year on, China is in a new stage of transformation. The first centenary goal will be achieved this year as the Party celebrates its centenary.

The CPC has announced that the country will see that socialist modernization is basically realized by 2035 and develop itself into a great modern socialist country by 2050.

Back to the commercial street in Shanghai, the scaffolding around the site of the first CPC national congress was removed on February 3, a solar term on the Chinese lunar calendar that marks the beginning of spring.

The building, which has witnessed the great miracles the CPC has achieved over the past century, will continue to witness the prosperous future ahead.