Migrants' home away from home holiday during the Lunar New Year

Railway police Yi Shan cooked steamed Wuchang fish, a typical dish in Wuhan, the Chinese city hardest-hit by COVID-19 last year, during the Spring Festival holiday to relieve homesickness and to celebrate the Year of the Ox.

It’s not the first year for the Shanghai Railway Station police officer to have spent the Spring Festival in the city. But it’s definitely one of the most memorable.

“We’ve gone through so much over the past year,” she said.

Besides fish, she also made popular Wuhan snacks like doupi for her husband and daughter. In a video chat with her family, she showed them the food she made.

Just a year ago, it was a totally different story. She was busy at work, while her family in Wuhan was trapped at home.

“The pandemic hit the pause button for Wuhan,” she said. “I had been so worried when I heard about the lack of supplies. My father’s stock of medicines to lower his blood pressure soon exhausted.

My grandfather and my aunt were receiving chemotherapy to treat cancer but hospitals suspended the service. My classmate’s mother got infected with coronavirus but was refused by overwhelming hospitals.”

Her worries were soon eased as the whole nation offered a helping hand to Wuhan.

“Difficulties were solved one by one. It’s a great nation,” she said. “Due to recent outbreaks of new locally transmitted cases, the nation called for a stay-put holiday. Though I couldn’t go home, we felt like we were together. I hope next year everyone can reunite with their families.”

Yi’s colleague Yongdanlamu from the remote Tibet Autonomous Region has been a railway police for three years, and for her, it’s the third year she has spent the Spring Festival holiday in Shanghai.

Every year she had nianyefan, Lunar New Year Eve’s dinner, with her colleagues. “Usually, we had it at noon because we had to be on duty at night. The meal was simple but I enjoyed it, especially the vegetarian dishes,” she said.

Her duty was to patrol around the exit of Shanghai Railway Station. She clocked off duty and left at 8:30pm. After she returned to the dorm, she changed in to traditional Tibetan clothes and recorded a video of her greetings to send to her parents and siblings back in Tibet.

“I want them to know that I’m fine in Shanghai,” she said. “I feel happy to safeguard the station and secure safe trips of passengers.”

She said, in Tibet, people also celebrate the Spring Festival.

“We usually eat wheat-made food such as bun and porridge. We also eat beef and Tibetan renshenguo tuber — from a wild perennial plant. But we rarely eat lobster and crab,” she said.

“Also, we will chant scriptures. And we believe that we can be prettier if we wash our faces by using water taken at midnight because the stars shine at night.

“The one who gets up the earliest in the morning of the Spring Festival is regarded as the luckiest one.” 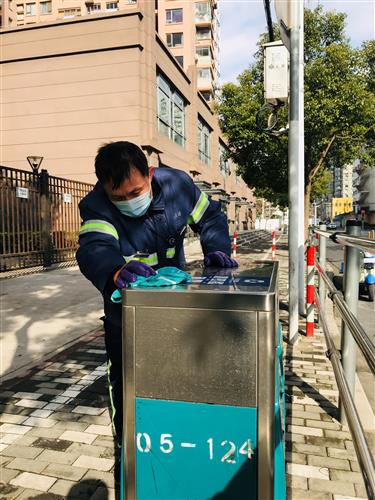 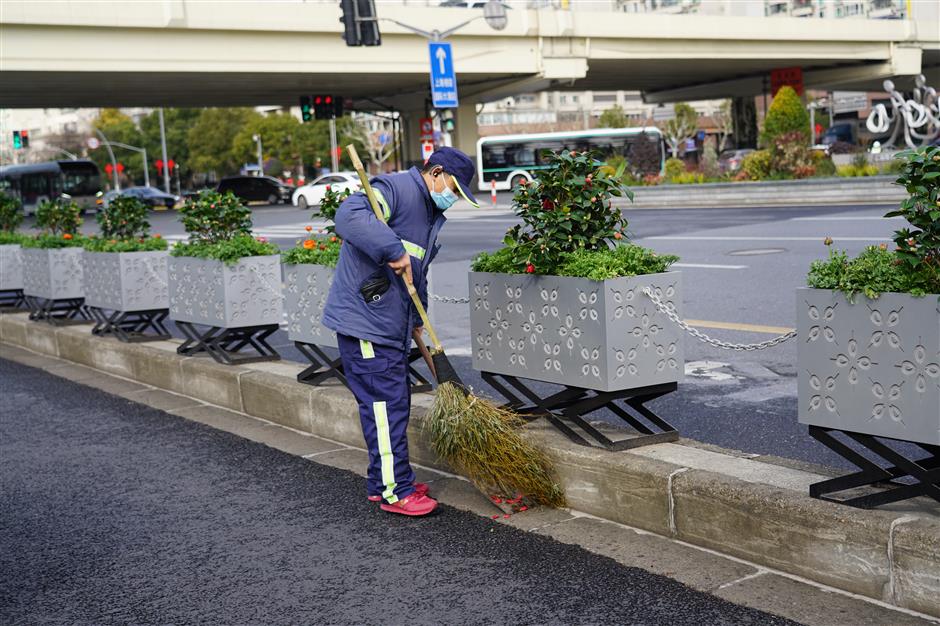 For 57-year-old Hu Dongting, the Spring Festival is a once-in-a-year reunion moment with his wife and son in their Jiangsu Province hometown. But this year, he responded to the government’s call to stay put over the holiday.

“My wife has been living in Jiangsu since 2005 as she’s in poor health. Like me, my son is also a migrant worker. We cherish every moment of reunion,” he said. “I miss them so much. But I understand that safety is the priority. So, three of us all decided to stay put.”

Pu Hui, 44, and his wife Ding Yuexia, 42, came from Anhui Province. They had planned to see their two children back in their hometown during the Spring Festival holiday. Considering the risks posed by gatherings, they decided to stay in Shanghai. To comfort them, the company sent migrant workers gifts and food, as well as free access to the Internet so they can video chat with their families. 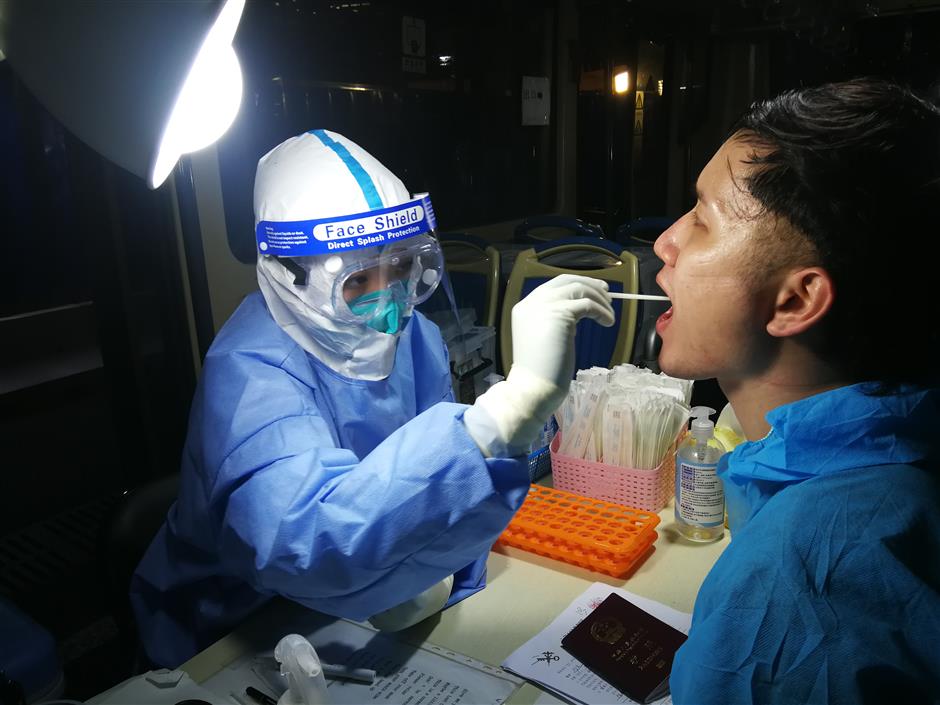 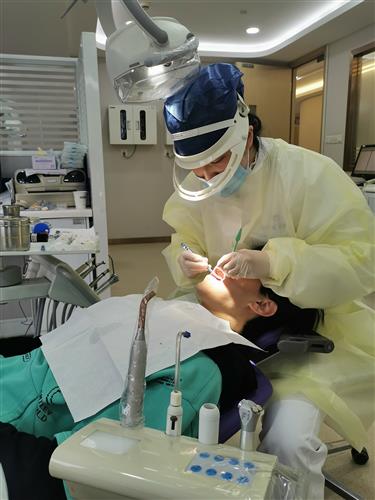 Zhang Jichao, a nurse from Shibei Hospital, again failed to keep her word.

In January 2020, she had promised to return to her hometown in Shandong Province to celebrate her grandfather’s 80th birthday, but she cancelled her plan due to the COVID-19 outbreak.

She cut her newly-curled hair and returned her train ticket. She sweet-talked her grandfather to let her stay in Shanghai during the Spring Festival holiday and she promised to come home next Spring Festival to celebrate her grandparent’s golden wedding anniversary.

However, recent coronavirus flare-ups forced her to draw back from what she promised. She felt so sorry for her family, but at the same time, she thought it was her duty.

She remembered receiving a patient who had a high fever after returning from Wuhan on the first day of Spring Festival last year.

In a panic, the man couldn’t fall asleep and she accompanied him to ease his tension. The next day, his fever disappeared and he was tested negative.

“He was so excited and thanked me. He said: ‘It’s so good to live healthy. Nurses are great. You didn’t isolate me alone. Instead you gave me so much care!’ I was proud of myself,” she said.

Unable to reunite with her family for the second successive year, Zhang has so many wishes.

“I hope pandemic will end soon, everyone reunites with their families and my son grows up healthy,” she said.

“Especially, I hope my grandparents can live long and I can fulfill my promise.”

Like Zhang, doctor Wang Chenxin from Jing’an Dental Clinic also opted to stay in Shanghai during the Spring Festival holiday.

Before 2020, Wang, from Xiangyang City in Hubei Province, reunited with her family every Spring Festival.

Last year, she bought a train ticket and packed her luggage very early. However, seeing the pandemic getting worse in Hubei, she became irresolute. But she didn’t hesitate long and she made up her mind to stay.

“If I returned to Hubei, I could have been trapped at home and couldn’t go back to Shanghai to see my patients,” she said.

This year, again, she spent the holiday in separation from her family.

“I miss them so much. But in the fight against the virus, everyone should take responsibility and indeed I’ve seen it in everyone,” she said.