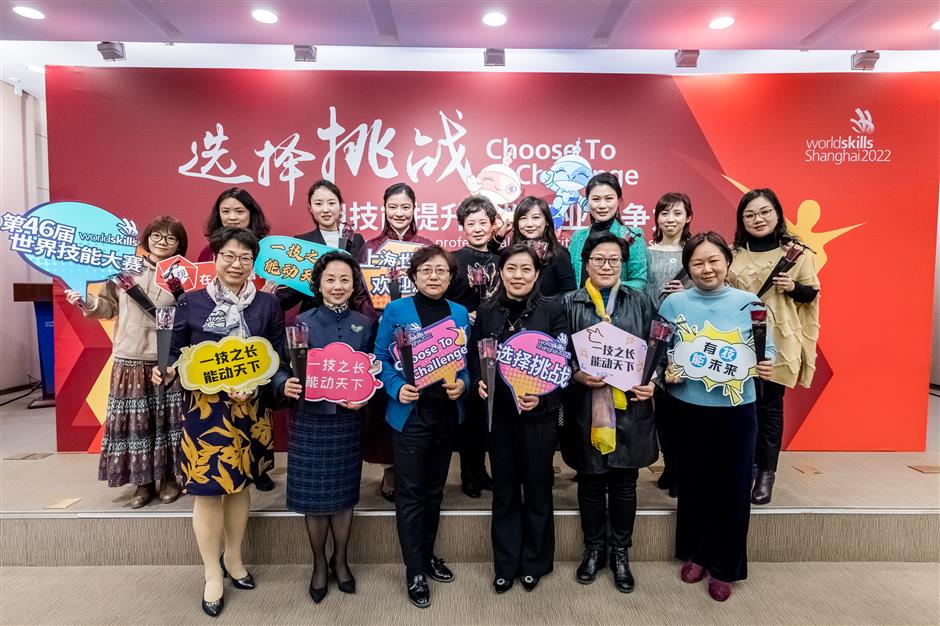 The Shanghai Women Pace-setters Society was appointed as a promotion team for the 46th WorldSkills Competition on Monday, International Women’s Day.

The WorldSkills Shanghai Executive Bureau, an organizer of the competition, and the society, a local organization for winners of the title of women pace-setters, agreed to cooperate in engaging more women in promoting the event taking place in Shanghai from October 12 to 17 next year.

They will also join in encouraging women in innovating and learning skills as well as inspiring their dedication in skills development to make a bigger contribution to society.

At the appointing ceremony, several women outstanding in their careers shared their experience and views on how to improve women’s professional competitiveness with skills.

“The WorldSkills Competition is to promote skills development around the world and our organization consists of leading technical experts, managers and scientists. We are honored to join the efforts in promoting the event which will take place on our doorstep,” said Li Yanling, the society’s chairwoman.

“Surely there will be women pace-setters participating in the event and more pace-setters will be honored due to their outstanding performance in it,” she said. “We will give full play to outstanding women as role models and help more women to realize their own dreams and build a better life.”

Chen Yifan, a China Eastern Airlines flight attendant, shared her story of competing in the 44th WorldSkills Competition in Abu Dhabi in 2017.

Chen was being trained as a flight attendant when she was selected as a candidate for the competition in restaurant service skills.

“I decided to pick up the challenge, and the whole process of training and competing made me more capable of handling challenges because I have solved so many in it,” she said.

“There are about eight women competitors from China in each WorldSkills Competition on average, which takes place once every two years,” she added. “We all have passed rounds of selections, which honed not only our skills, but also our will and mindset, enabling us to handle challenges calmly and confidently.”

Li Xianghua, of Volvo Cars, joined the company before it was purchased by Geely and after her husband moved to Shanghai.

“Because of the change in my husband’s job, I quit my job at Jinbei Auto in Shenyang and started from the beginning again in Shanghai,” she said.

She was one of the first 30 people in the company’s office in Shanghai, which now has over 1,200 staff in Shanghai and over 9,000 around the country.

“I was in charge of purchases but short of hands, so I was very busy at that time,” she said. “So I learned a lot of new skills to improve work efficiency, including team management skills.”

She said she was glad to learn about the WorldSkills Competition and would take the information back to the employees of her company, which also organizes its own skills competitions.

“We can also study the competition scheme of the world event to benefit ourselves,” she said. “I hope it will be chance for more people to learn more, get more and live a happier life.”

Chen Wei, who won gold, silver and bronze prizes in the Cake International competition in the UK in 2018, shared her story about how she had started her new career in food art after having a baby.

She said most women still had to balance family life and work while men didn’t have to.

“As mothers, we have to take care of our children’s life and study, while doing our job, which brings us a lot of challenges,” she said. “So when we are improving our skills to enhance our professional competitiveness, we also hope the whole society will work together to improve gender equality.”

As part of International Women’s Day, WorldSkills International, an organization promoting recognition of skills and skilled people, is also celebrating women’s achievements in an effort to forge a gender-equal world and encouraging women to share their stories.