Doctors save boy with abscesses on brain

A 4-year-old boy with eight brain abscesses, some as big as an egg and at risk of rupture, was saved after treatment lasting 58 days, doctors at Xinhua Hospital said on Wednesday.

The boy had been suffering from repeated fevers, fatigue, poor appetite and head pains. A CT scan at a hospital in his hometown found several abscesses in his brain.

The family took him to Shanghai’s Xinhua Hospital, which set up an expert team.

Doctors said there was an 80 to 100 percent chance of death if an abscess ruptured.

Because the boy had complained of headaches there was a high risk of rupture.

Doctors treated the infection and used suction to deal with the abscesses. It was a very delicate process to avoid damage to healthy brain tissue and nerves. Any mistake, and the infection could spread to the central nervous system, doctors said.

Xinhua’s Dr Chen Ruoping said the commonest cause of brain abscesses was an infection spread by nearby organs or the blood.

Brain abscesses are rare and only seen in poor regions nowadays, the doctor said. The boy’s condition may have been related to antibiotics abuse, Chen added. 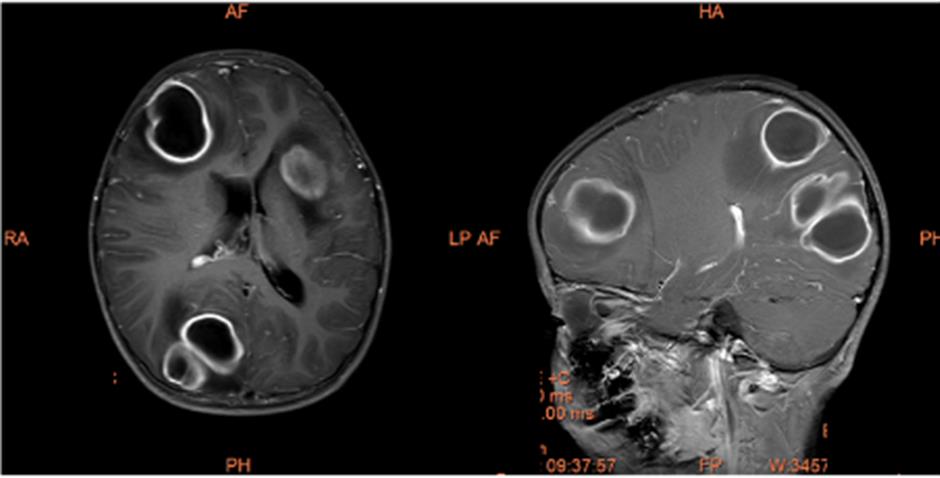 Abscesses can be seen in the brain of a 4-year-old boy treated at Xinhua Hospital.