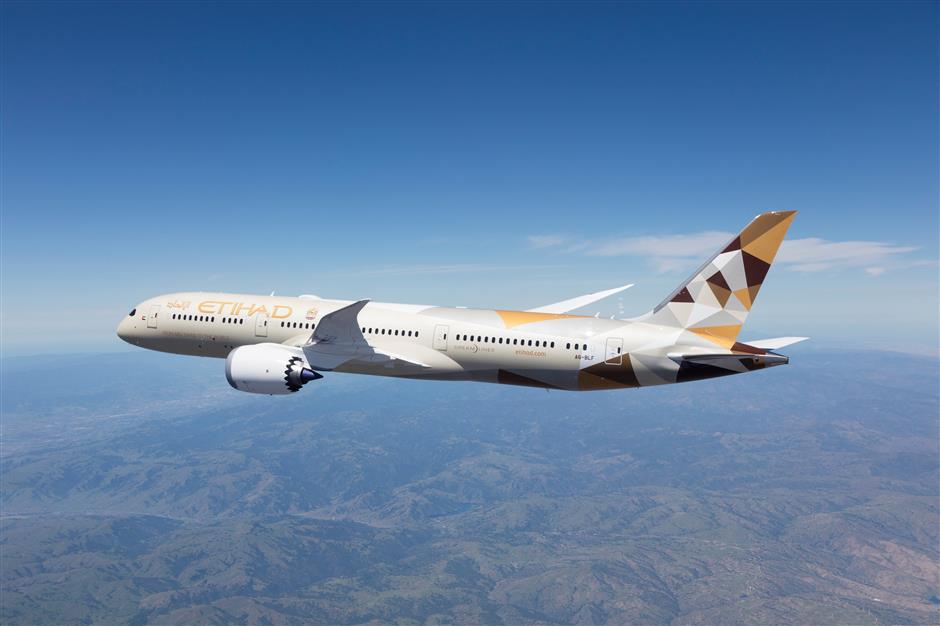 An Etihad Airways' flight from Abu Dhabi is suspended after passengers test positive for COVID-19.

An Etihad Airways' flight from Abu Dhabi to Shanghai has been suspended after passengers tested positive for COVID-19, China's civil aviation authority said on Thursday.

Flight EY862 was suspended for two weeks from March 22 after seven passengers on the flight tested positive on March 1, the Civil Aviation Administration of China said.

Another flight from Abu Dhabi to Beijing, an awarding flight of Etihad, was cancelled as part of the punishment.

CAAC policy states that if all inbound passengers on an airline test negative for coronavirus three weeks in a row, the airline will be allowed to increase flights to two per week.

If five test positive, flights will be suspended for two weeks.

Flight EY862 was suspended for a week in August last year. The suspension was later prolonged for another week as more imported COVID-19 cases were detected.

The carrier said it had beefed up regulations for all passengers flying to Shanghai after passengers on the flight tested positive for COVID-19 on arrival at the Pudong airport.

The airline says all passengers traveling to Shanghai have to show a negative COVID-19 test result issued within 48 hours of departure from Abu Dhabi, or from their departure airport if they are transferring from another city via Abu Dhabi.

The CAAC launched its suspension mechanism for international passenger flights in June, 2020. Over 100 suspension orders have been issued to both domestic and overseas carriers.

Shanghai reported five imported coronavirus cases on Wednesday. So far, of all 1,454 imported cases, 1,418 patients have been discharged on recovery while 36 are still in hospital. Two suspected cases are undergoing tests.