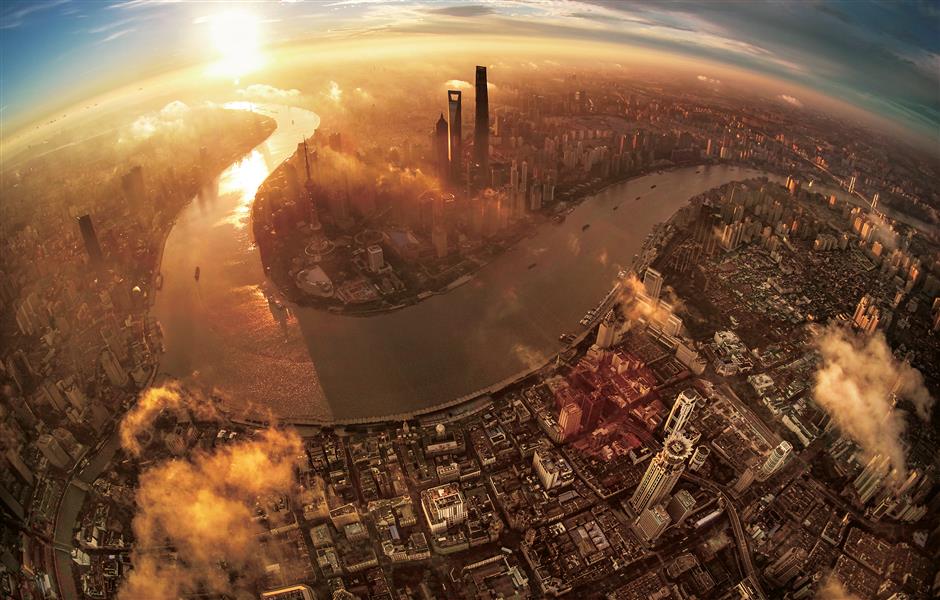 The North Bund area stretches for about 4 kilometers along the west bank of Huangpu River.

Hongkou has issued a new series of measures to attract further foreign investment to optimize the district’s business environment.

One new measure is providing online consulting services around the clock to multinational headquarters, overseas research and development centers and foreign investment projects.

A specialized follow-up service will be offered to overseas investments, which will reduce the application process time by at least a third, while a lawyers’ commission will be established to handle other foreign-related matters.

A service platform for overseas professionals will be put in place with additional talent departments to attract more specialists and those studying overseas.

A service station will be developed on the North Bund to assist professionals from abroad applying for work permits, professional title appraisals and other services.

Furthermore, a trademark guidance station and legal rights protection studio will be built to help protect the intellectual property rights of companies.

With a new round of development underway on the North Bund, foreign companies have increased investments in the waterfront region, said Hao Liguo, director of the Hongkou investment promotion office.

A trial operation will be launched to allow business owners to register their newly established companies without the help of government staff. This self-service procedure will make it more convenient for startups and new companies.

Meanwhile, company representatives will be encouraged to talk with government officials to ask for advice or raise queries.

The district government plans to improve its “office building chief” scheme to help government officials resolve any problems companies may come across operating inside the building.

Hongkou attracted 1.3 billion yuan (US$200 million) in overseas investments in 2020, higher than most other downtown districts.

Over the past three years the average overseas investments pulled in 1.28 billion yuan, according to the district government.

The riverside region, along the 4-kilometer Huangpu River, will become a “new engine” for Shanghai’s future development.

The 320-meter-high Sinar Mas Plaza, also known as the White Magnolia Plaza, is currently the tallest structure in Puxi.

Over 97 percent of the 5A-plus office building has been rented to some of the world’s biggest companies, such as the cosmetic firm Kose, manufacturing company YKK, soccer team FC Bayern Munich, as well as motor companies BMW, Nissan and Volvo.

Fan made it known that district officials solved many difficulties for employees of the building’s overseas companies amid the pandemic.

The commercial complex of the plaza, which officially opened to the public in 2019, has attracted over 150 businesses, including several which opened their first stores in Shanghai or China, such as the Wolfgang’s Steakhouse and a flagship China Dinosaur Park in Changzhou, in neighboring Zhejiang Province.

The Hongkou government has made optimizing the business environment a key measure to drive its regional economic development.

It has released four rounds of preferential measures to develop its business atmosphere.

The total registered capital of companies in Hongkou increased to nearly 741 billion yuan by the end of 2020 from 543.2 billion yuan in 2017.

Yihai Kerry Arawana Holdings Co, a major grain and oil supplier of the city, has benefited from the rapid development of Hongkou in recent decades.

The company grew its business on the North Bund from a small workshop to a food manufacturing giant with products including grain and oil, special grease, soybean milk powder and chocolate.

Nearly 1,800 financial companies from both home and abroad are based in the North Bund region, which manages over 6 trillion yuan of assets.

More than 200 top-grade office buildings are being built on the 4-square-kilometer riverside region.

Its development density will be on par with the London financial hub, which contributes nearly a third of London’s GDP.

Construction will start on a 480-meter high-rise building, covering an area of about 350,000 square meters. It is being earmarked to drive the development of high-end industries and become a home to global enterprise.

The plot of land, near Dantu, Dongchangzhi, Gaoyang and Tangshan roads, will see 24 percent of its areas used for commercial enterprise, restaurants and hotels, while the rest will be used for offices, according to the blueprint.