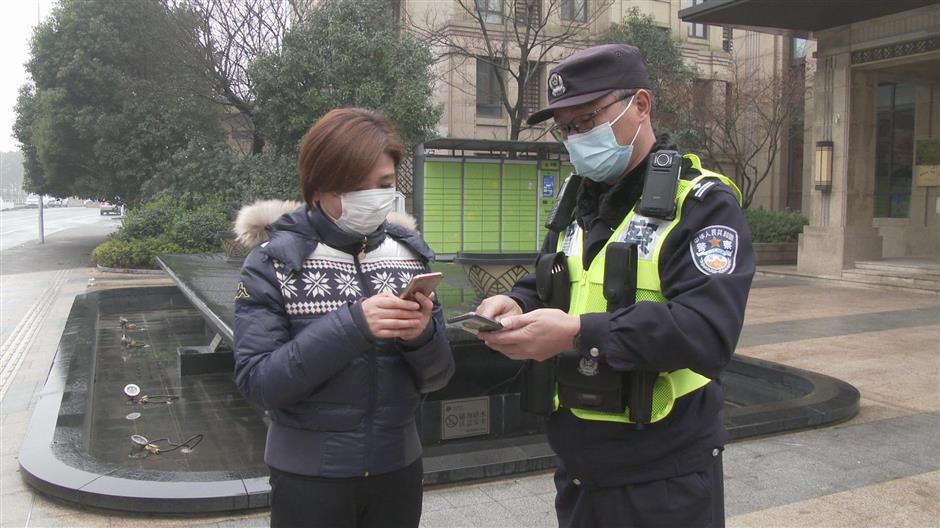 In Jiading District, a community police officer adds a resident to a WeChat group he operates.

More than 400,000 residents have joined over 3,000 WeChat groups formed by police officers who serve their communities, according to the district police.

Largely due to the new measure, the number of cases reported through 110 calls  in the district last year was down 19 percent from the previous year, police said.

In the precinct of Yecheng Police Station, which has about 60,000 residents, some 18,000 people have joined 126 groups started by community police officers.

The community police officers respond to people’s needs filed in the groups, and when they’re not available, officers on duty 24/7 at the police station who operate a collective WeChat account, and join all groups, stand by to take any request.

Wang Qing, an official of Yongsheng community which is located within the precinct of the police station, said residents find the WeChat groups with police officers beneficial.

“Previously, the community police officer was available only during office hours, but now he’s always available,” she said. “Also, some residents are not used to personal visits by the police, so they find it easier to communicate with the officer on the Internet.”

Residents now tend to report noise problems, pet raising irregularities and parking disputes, which are the most common complaints filed to the police, in WeChat groups instead of calling 110, according to the district police.

In Anting Town, Guo Yuliang, a community police officer of Yulan Ercun who operates 10 WeChat groups with about 2,000 people, received a report from a woman in one group towards the end of September last year who claimed that her husband might kill her.

“The couple have been living apart for years, and the husband claimed that he would kill her and then himself if his wife refused to give him money,” Guo said.

The day the husband appeared in the residential complex, Guo and his assistant controlled him and found a knife in his bag. Guo engaged officials of the residents’ committee to mediate between the couple and eventually persuaded the man to leave and not threaten his wife.

Group members also help each other on various matters.

During the COVID-19 pandemic last year, when residents needed to apply on the Internet for masks, a foreign resident couldn’t get the service due to the language barrier, said Shen Jian, vice director of Juyuan Police Station. The resident was able to get help through the group.

Group members are also alert to potential telecom and Internet scams, and once suspicion is established, reminders are sent through all groups to prevent people from falling victim.

Tang Weibin, vice director of the political department of Jiading District Public Security Bureau, said the community police officers have the support of their colleagues in improving their services through WeChat groups.

“They can forward questions from the residents which they can’t professionally answer to officers from other police departments,” he said. “On the district level, we provide training for them to more effectively communicate with people in WeChat groups.”

All around the city, community police officers are starting groups with residents, with the work most effective in Jiading District, according to Shanghai police.