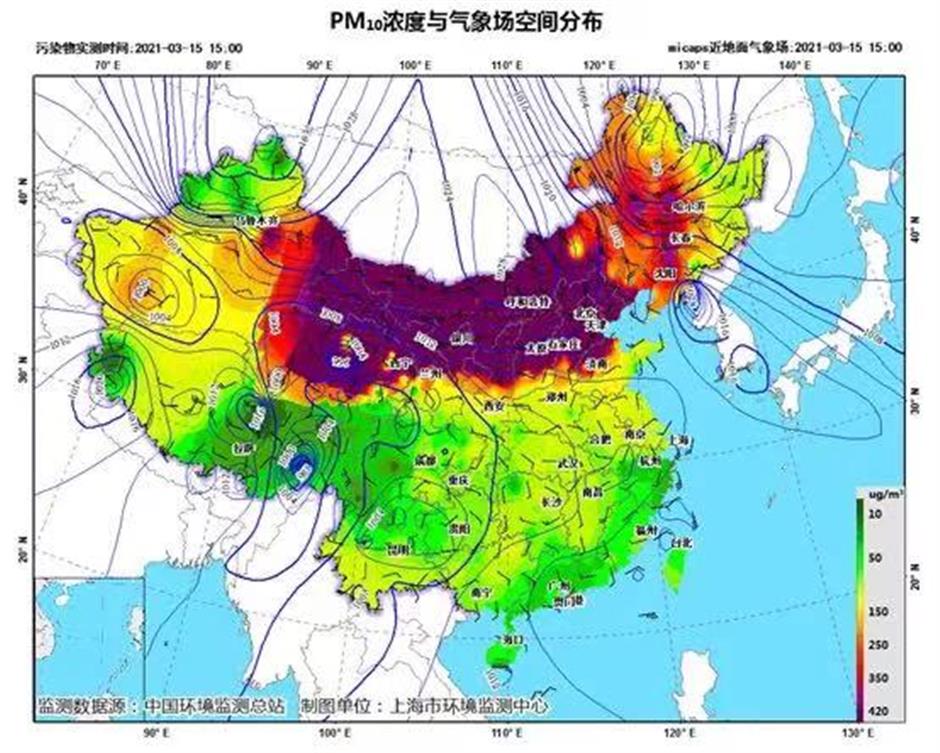 Data about the concentration of PM10 in China collected by the Shanghai Environmental Monitoring Center at 3pm on Monday.

A sandstorm in Mongolia will not greatly affect Shanghai due to rain from Monday afternoon to Saturday, Fu Yi, an official at the Shanghai Meteorological Bureau said on Monday.

The Shanghai Ecology and Environment Bureau said slight air pollution is expected on Tuesday because of the high concentration of PM10 particles blown from the north but the air quality in the following two days will be good.

Since last Sunday night, the sandstorm has swept over areas in the north such as Beijing, the Xinjiang Uygur Autonomous Region and Shanxi Province. It is China’s biggest sandstorm in the past 10 years, the China Meteorological Administration said.

The concentration of PM10 in some areas of Beijing reached over 8,000 micrograms per cubic meter at 9am. A figure over 500 indicates serious air pollution.

However, due to a cold front arriving in Shanghai on Monday afternoon, rain will fall over the following five days and wash pollutants away, Fu said.

Maximum temperatures will fall by 10 degrees Celsius to 13 degrees Celsius on Tuesday. During the rest of the week, they will fluctuate from 11 to 14 degrees, with lows between 10 and 7 degrees, the weather bureau said.