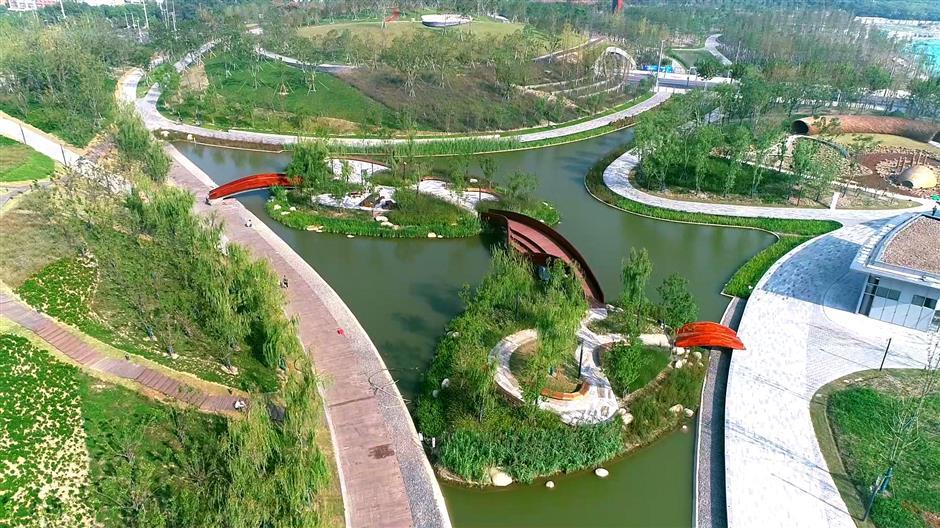 Part of Taopu Central Greenbelt has opened to the public on a trial basis.

Taopu, once one of Shanghai’s most polluted industrial sites, has completed over 70 percent of soil remediation in its core area in the city’s northwest downtown.

The ecological environment of the region, which was among the earliest chemical industrial parks in Shanghai dating back to the 1950s, has largely improved, the management committee of the region told a forum on Thursday.

A greenbelt in the north covering 500,000 square meters has opened to the public, while another park in the south of the region will be completed soon, said Ying Mingde, executive vice director of the development and construction office of Taopu Smart City.

The office hosted the Shanghai Top Forum at the China-Israel Innovation Hub, one of the key projects in the region, on Thursday. Urban planning officials and experts were invited to give suggestions on the development of the region.

Some 74 percent of the soil polluted by the city’s earliest rubber, battery and other chemical factories has been purified, while underground water treatment is 60 percent complete, Ying told the forum.

Construction has started on some 860,000 square meters of buildings, including commercial facilities and offices, Ying said. A number of scientific innovation projects based in the China-Israel hub have been signed to operate in the region.

Taopu was among the first batch of chemical industrial parks in Shanghai. Set up in 1954, the development of its industrial enterprises was at its peak in the 1980s when Hero pens and locally produced perfumes became popular in Shanghai.

The district government launched construction of the smart city in 2014 to wipe out the polluting factories and implement a major facelift for the industrial region.