This old street has something for everyone

Visitors to Anting Town will be able to enjoy Kunqu Opera, one of the genres of traditional Chinese theater arts, following a renovation program.

Performances of “The Peony Pavilion” will be screened every day from 5pm to 8pm in a high definition projection on a white wall in Anting Old Street.

The opera, written by Tang Xianzu (1550-1616), is one of the most enduring classics of Chinese opera. It is a lyrical tragicomedy of love and perseverance that transcends time and space, life and death.

“Anting Old Street is such an interesting and lively place. Watching the Kunqu Opera on an ancient Hui-style white wall is such unique experience for me,” a 63-year-old woman surnamed Sun said. “I posted pictures on WeChat and many of my female friends showed a great interest in it.” 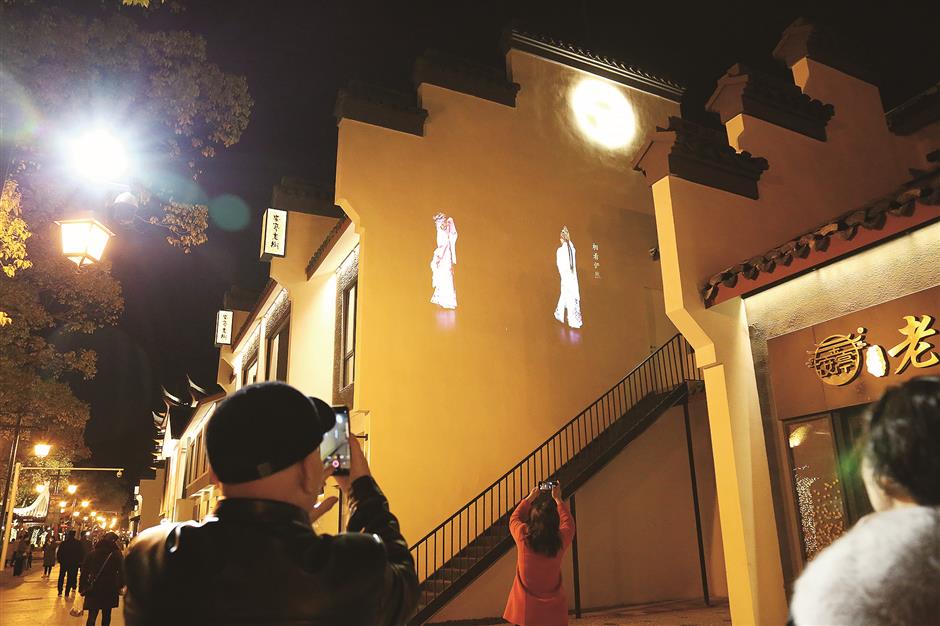 A resident takes photos of a Kunqu Opera performance projected on a white wall in Anting Old Street. The newly renovated street has attracted many residents.

Lights in the shape of ginkgo leaves have been installed as Anting has a ginkgo tree that is more than 1,200 years old.

“The lights are so unique, and they are similar to the gingko leaves, both in color and shape,” a resident surnamed Wang said.

On store windows, on light boxes and on signboards, the “ginkgo leaves” exude a warm yellow light to complement the soft and friendly style of the old street.

Lights have been installed under the roofs of buildings on the 1-kilometer street, and more lights in modern designs are planned.

The lighting system is turned on from 6pm to 6am every day.

After renovations, the old street opened to the public in January.

At present, 11 retail brands have decided to move. It is estimated that 30 merchants will launch businesses in the future, mainly in catering, cultural innovation and new retail.

Anting Old Street has a long history. After the Bodhi Temple was built there in the Three Kingdoms period (AD 220-280), it gradually became a town which incorporated other historical sites that included Yong’an Tower and Yansi Bridge.