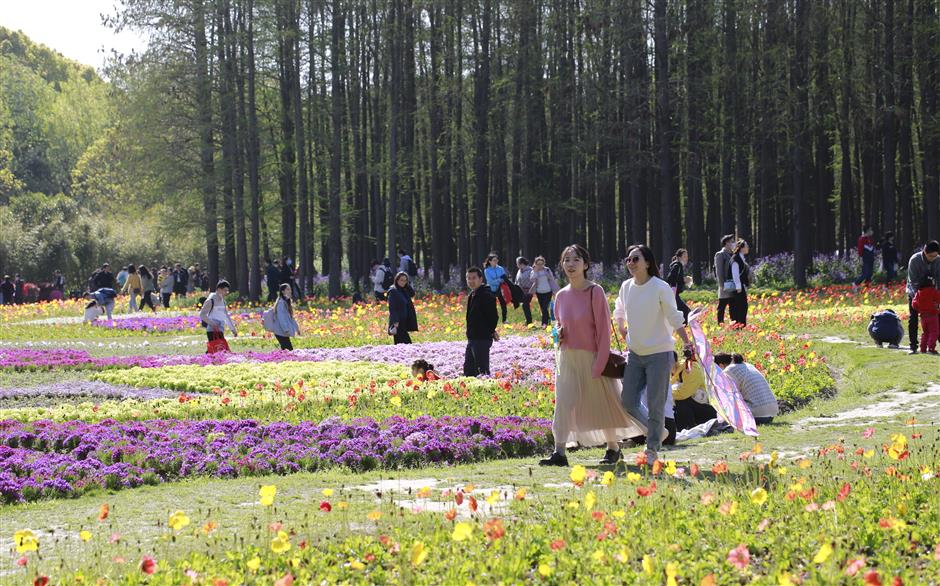 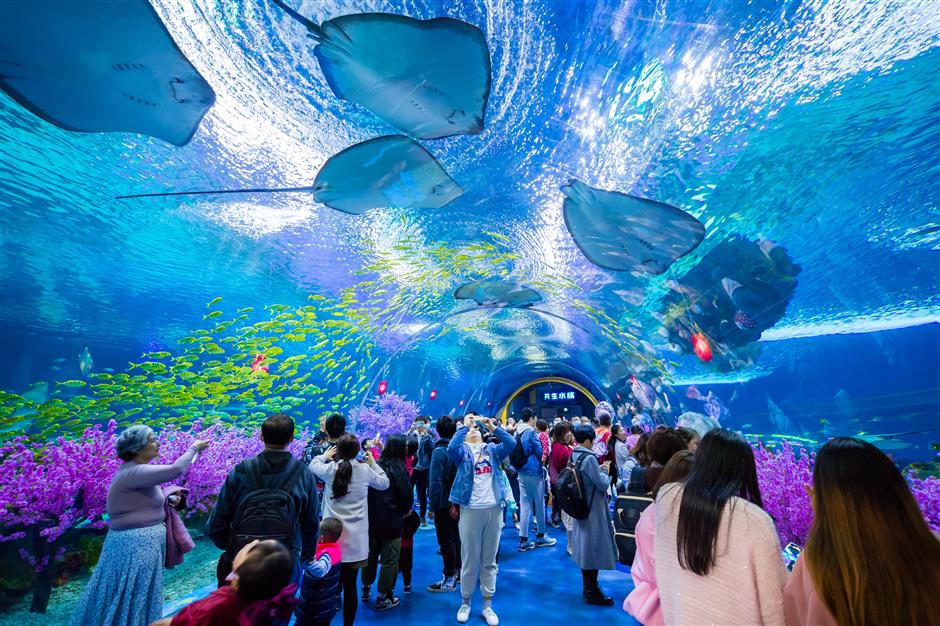 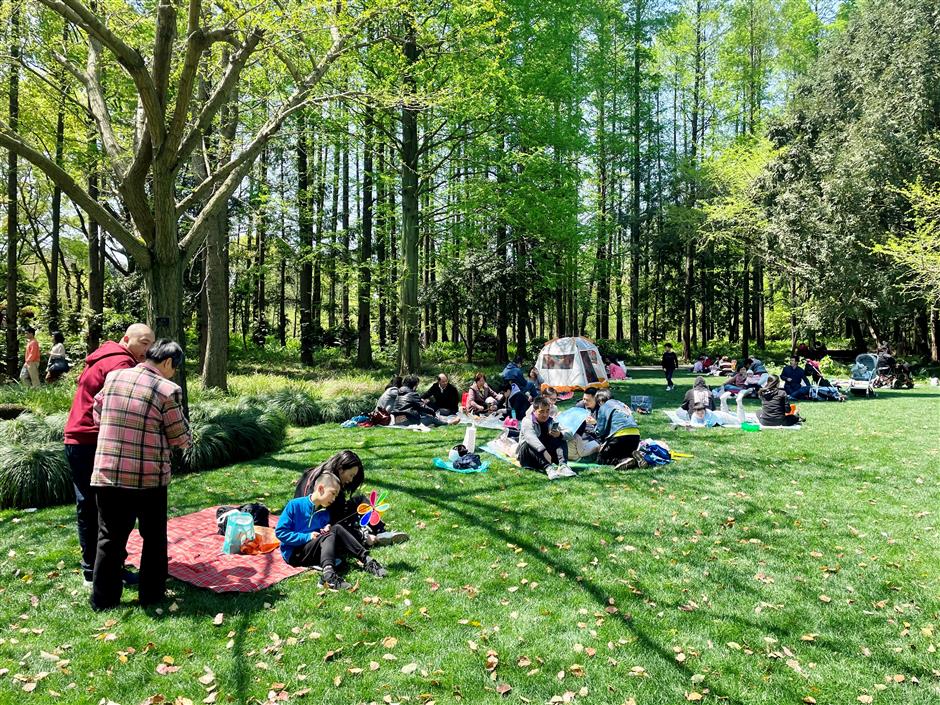 A grand day out for these visitors enjoying nature at Shanghai Botanical Garden.

Pleasant weather, the waning COVID-19 situation and flower shows brought out the crowds during the three-day Qingming Festival holiday.

The city recorded almost 9 million visits by tourists during the holiday, generating a revenue of 4.1 billion yuan (US$624 million). The average occupancy rate of hotels in the city was 52.8 percent, up 33 percent from the same period last year, according to the Shanghai Administration of Culture and Tourism.

With the pandemic under control, residents and tourists were enthusiastic about spring tours and flower appreciation was their top option, the administration said.

The city's countryside parks were crowded, with some suburban attractions such as Zhujiajiao watertown particularly busy, the administration said. 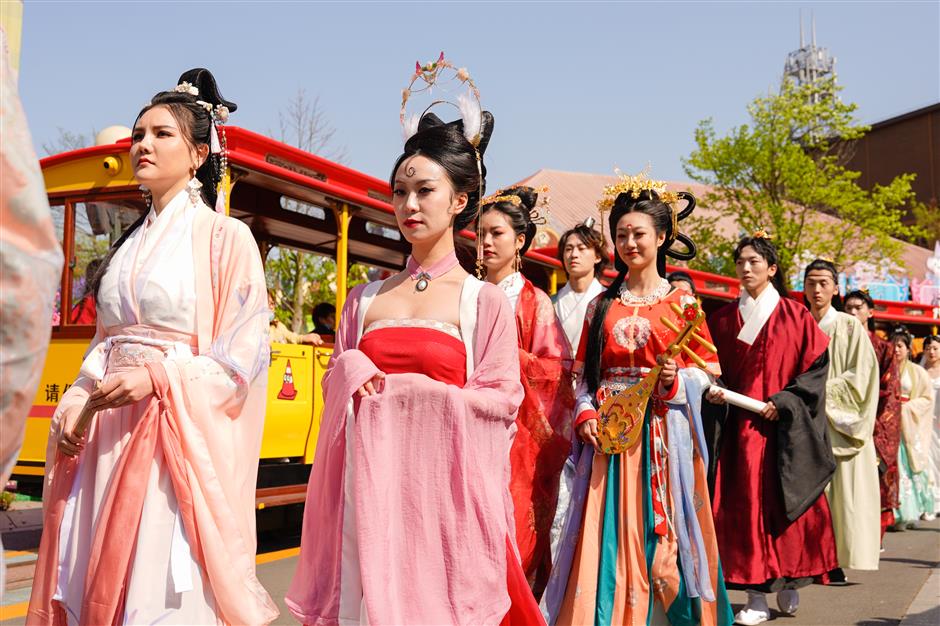 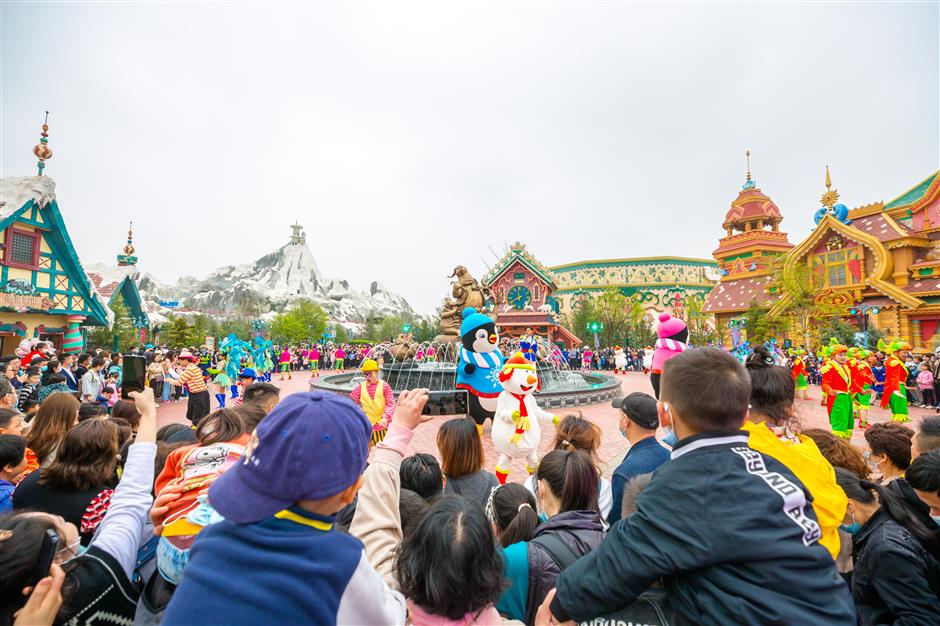 Shanghai Science and Technology Museum welcomed 45,000 visitors and there were 234,000 at the Shanghai International Resort, where the Disneyland is located.

Forty-three art galleries in the city hosted 82 exhibitions during the holiday, attracting 50,000 visits, a 571-percent surge from the same period in 2020. 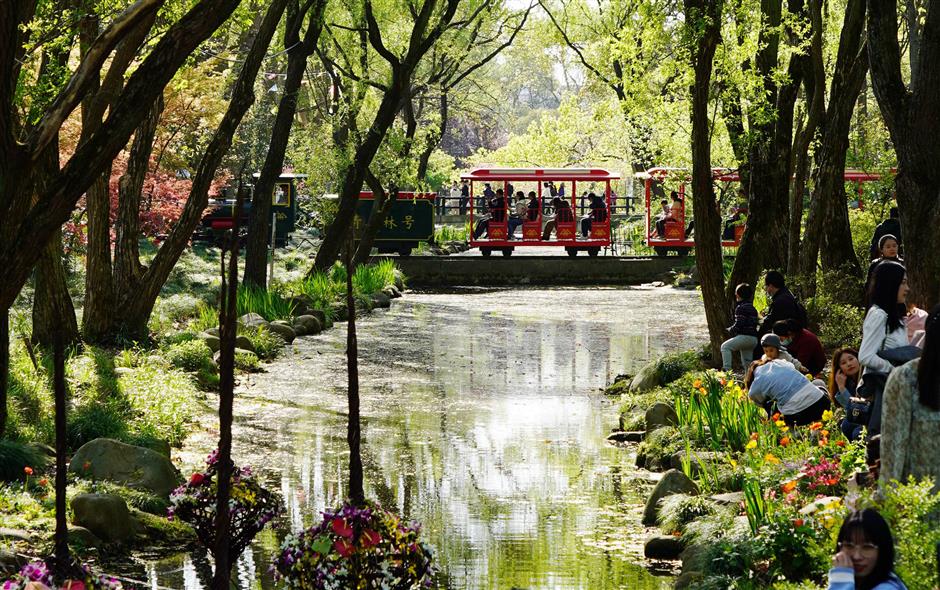 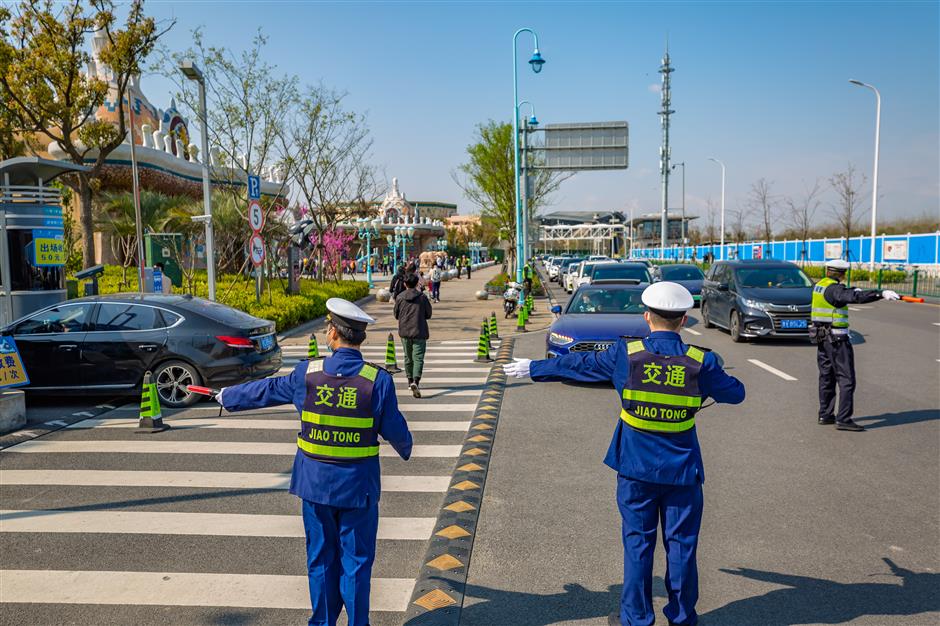 Parks across Shanghai had 2.355 million visits in total during the holiday, up 25.96 percent from the same period last year, according to the Shanghai Greenery and Public Sanitation Bureau.

“There's nothing more pleasant than a picnic in a park under the sunny and balmy weather although it was difficult to secure a place due to big crowds,” said city resident Zhang Yong who visited the Gongqing Forest Park during the holiday with his former classmates.

"There are people everywhere, but still, it is good to embrace nature," he said.

Zhang said he mostly stayed at home during the Spring Festival holiday due to the pandemic.

"There are queues everywhere no matter where you go, even at the toilets," said Cui Hong, another Shanghai resident who visited Shanghai Happy Valley.

Cui said she and her boyfriend needed to pay a second visit to experience more of its amusement attractions. 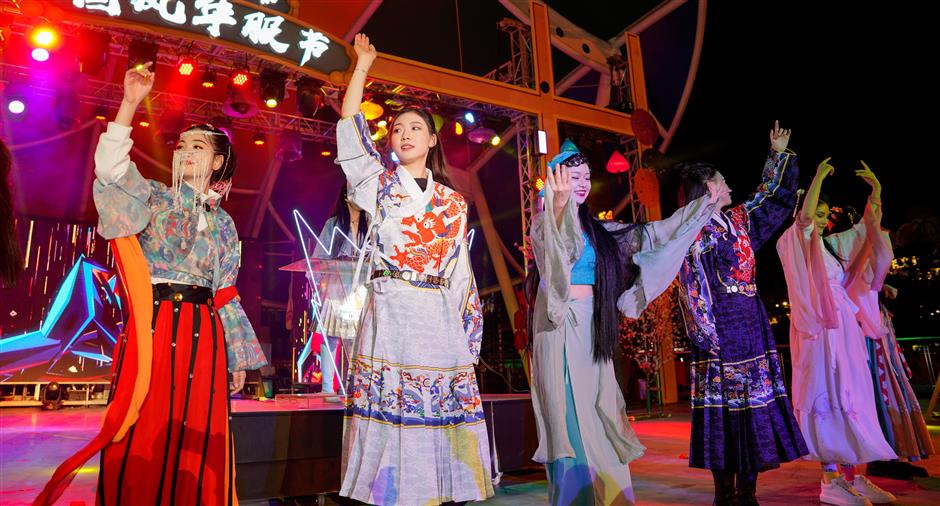 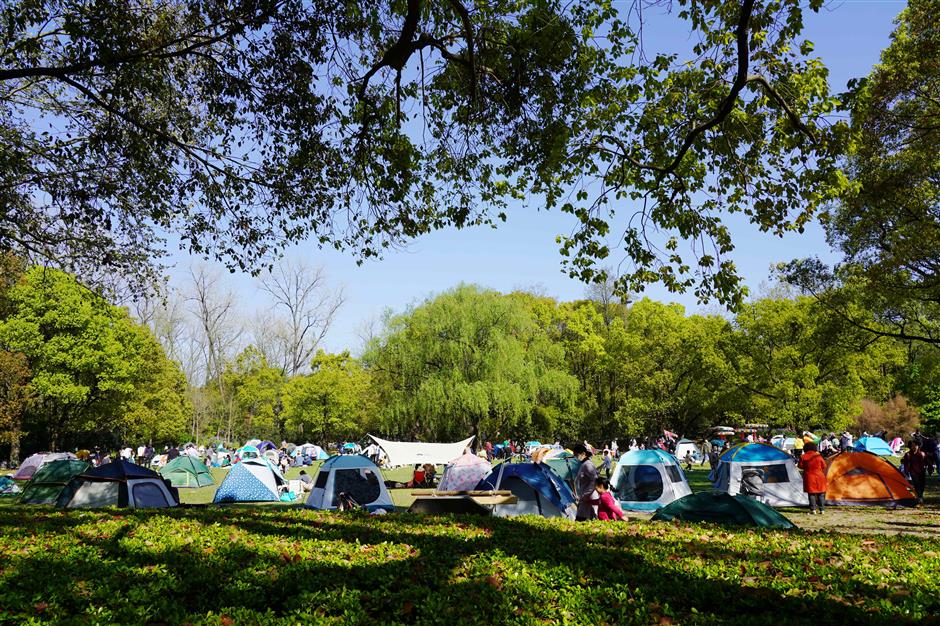 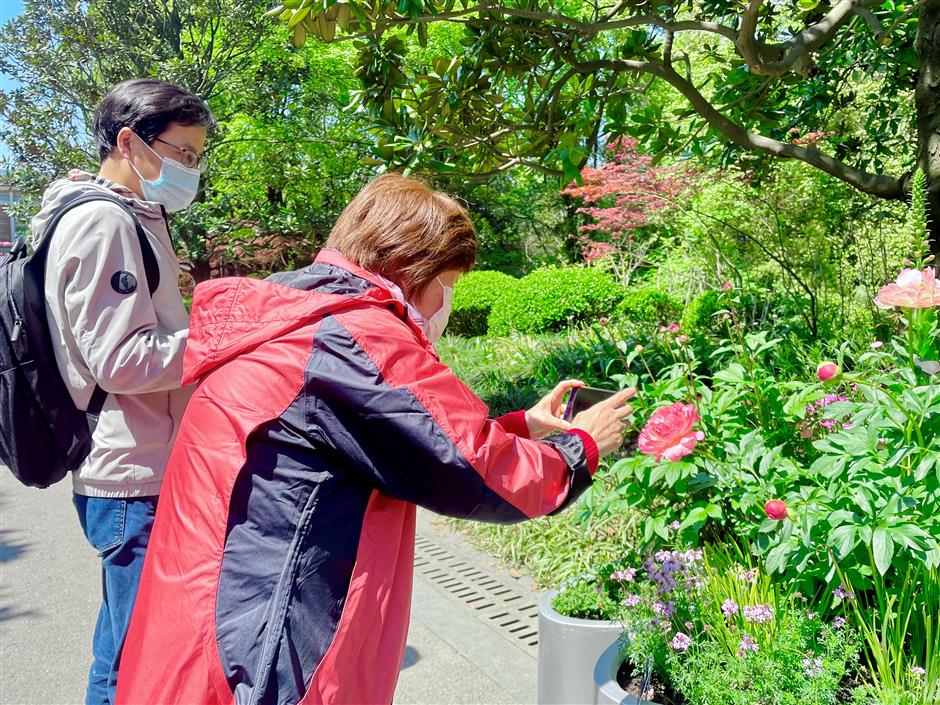 A visitor takes photographs of the flowers at Shanghai Botanical Garden.

Shanghai-based online travel operator Trip.com said there had been a strong rebound in the domestic tourism market and the number of its air ticket orders saw double-digit growth from that of 2019.

Shanghai-Beijing, Beijing-Chengdu and Guangzhou-Shanghai were some of the most popular routes during the holiday.

Shanghai Disney Resort, Henan Museum, Shanghai Haichang Ocean Park, the Palace Museum and Longmen Grottoes were among the most popular destinations in China, it said.

Vehicle rental services and private tour groups were more popular due to the pandemic, it said.

"Red tourism" and flower appreciation tours were popular options and 38 percent of those booking holiday itineraries on the site were born after 1995.

Bookings for "red tourism" destinations such as Zunyi, Yan’an, Nanchang, Jiaxing and Jinggang Mountain surged over 180 percent from the same period last year.