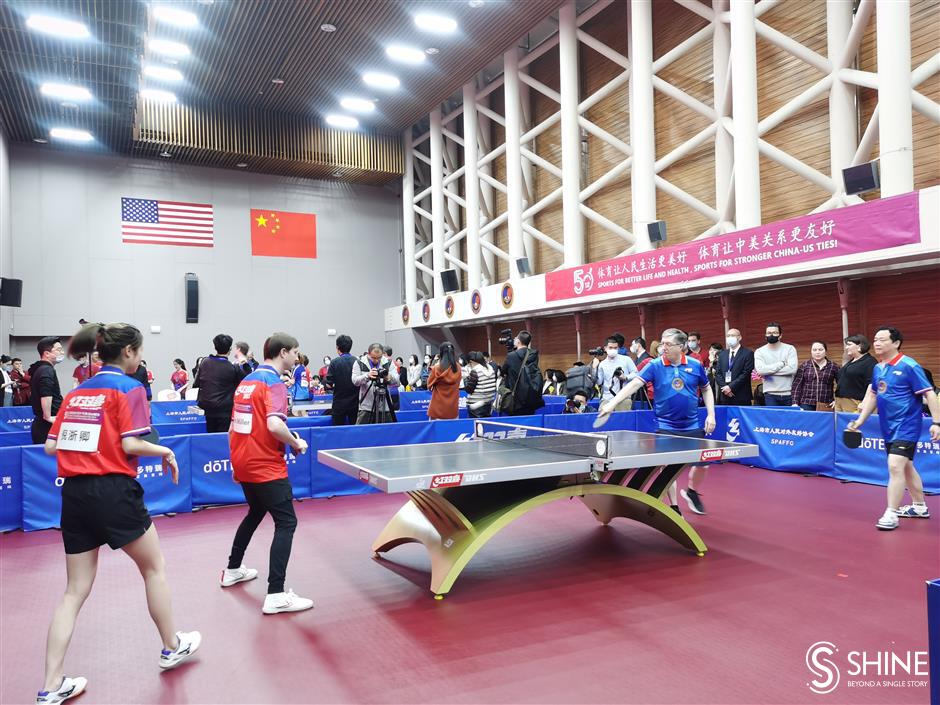 When Chris Miller, a business advisory services manager at the US-China Business Council, watched the film “Forest Gump," which featured Ping Pong Diplomacy, he had never thought that he would take part in anything related to it.

But that did happen on Saturday afternoon. He attended a friendship table tennis match at the International Table Tennis Federation Museum and China Table Tennis Museum in Shanghai to commemorate the 50th anniversary of the historical event.

They arrived on April 10, 1971, becoming the first US group to visit since the founding of the People's Republic of China in 1949. The Chinese team paid a return visit the following year. 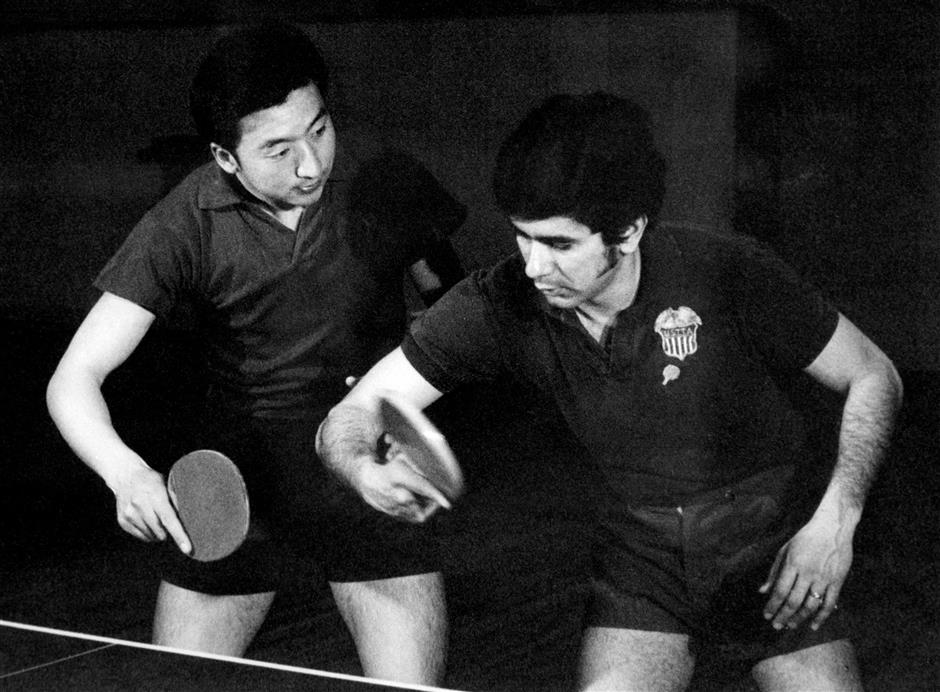 The mutual visits broke the ice in 22 years of estranged Sino-US relations and eventually led to the normalization of bilateral ties.

During their eight-day visit to China, they played friendly competitions with Chinese ping pong players with a principal “friendship first, competition second.”

The Saturday event, organized by the Shanghai People's Association for Friendship with Foreign Countries, Shanghai Sports Federation, Shanghai University of Sport and Shanghai Institute of American Studies, with the same principal, gathered 13 Chinese people and 13 Americans working and living in Shanghai. They were mixed and divided into four teams to play the doubles competition, with each American paired with a Chinese.

“Though I’m busy and I’m going to get married next week, I wanted to take part in it and spent time practicing once a week over the past month,” he told Shanghai Daily. 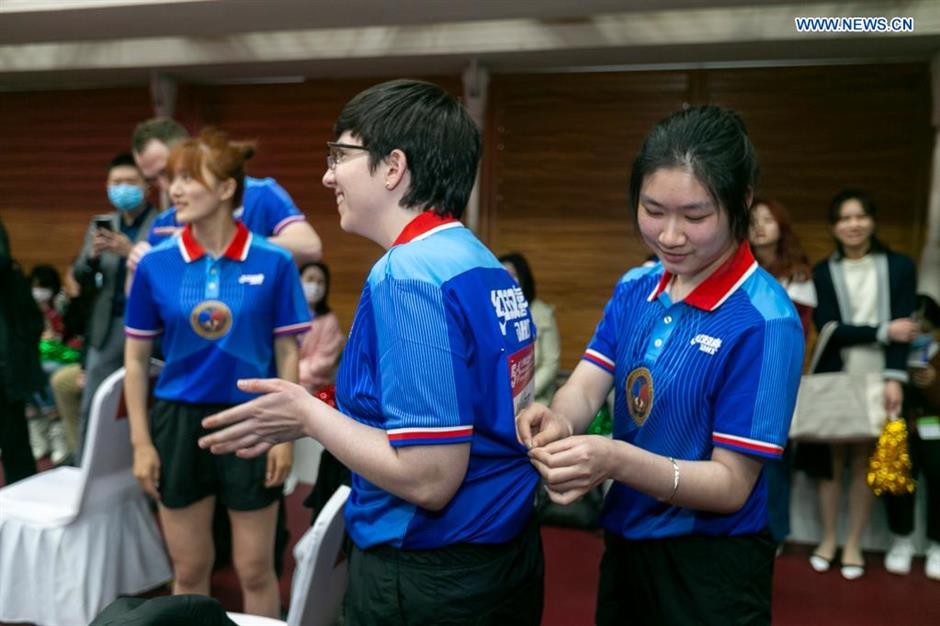 Wu Yiman (right, front) from China Table Tennis College puts on the bib number for Vivian A. Mitnick (left, front) from the US Consulate General in Shanghai prior to a China-US Ping-Pong friendly match during a special event in Shanghai, east China, April 10, 2021.

Jeffrey Lehman, vice-chancellor of New York University Shanghai, the first Sino-US joint university in China, said ping pong has been one of his favorite sports since his childhood.

He shared his memories of the Chinese table tennis team’s return visit to the US in 1972.

“The Ping Pong Diplomacy was a turning point in the US-China relation,” he said.

“It started with a critical moment when one (American) player got on the wrong bus and another (Chinese) player reached out to him and they became friends. From that, they changed our history. I’ve now been living in China for 13 years. At the level of individuals, students, business people, it’s natural to be friends, to cooperate and to engage to do these things.”

Before the competition kicked off, the Chinese Ambassador to the United States Cui Tiankai gave a video speech at the launching ceremony for the celebrations. 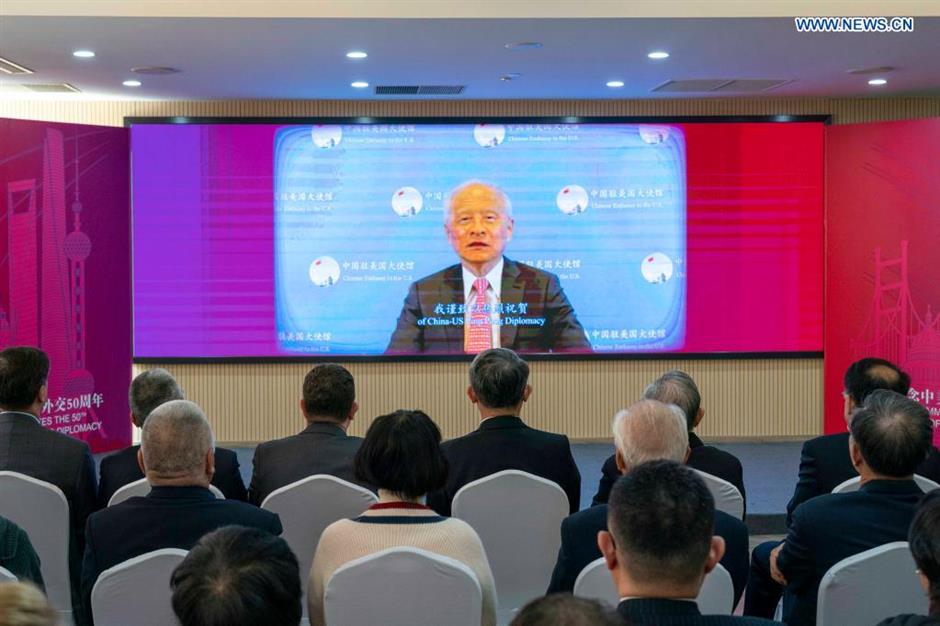 Chinese Ambassador to the United States Cui Tiankai delivers a video speech during a special event to commemorate the 50th anniversary of the Ping-Pong Diplomacy between China and the United States in Shanghai, east China, April 10, 2021.

“The Ping Pong Diplomacy of 50 years ago is of special significance in the history of China-US relations," he said.

"It opened up a creative and unique way of communication between the two peoples, who had been separated for decades, and sent a signal to both countries and the world that China and the United States would improve their relations, thus ushering in a series of major events from President Nixon’s visit to China to the establishment of China-US diplomatic relations."

He pointed out that today the China-US relationship faces a critical choice as to its future path.

“The two sides should inherit and carry forward the spirit of Ping Pong Diplomacy featuring mutual respect and seeking common ground while reserving differences,” he said.

“At present, the pandemic and the great changes unseen in a century are intertwined, and traditional and non-traditional security threats have emerged one after another.

"In the face of varied global challenges, China and the United States can and should cooperate in more rather than less areas. The two countries should strengthen coordination and collaboration on issues such as COVID-19 response, climate change and economic recovery, provide more public goods to the world, and make globalization more open, inclusive, balanced, and beneficial to all.” 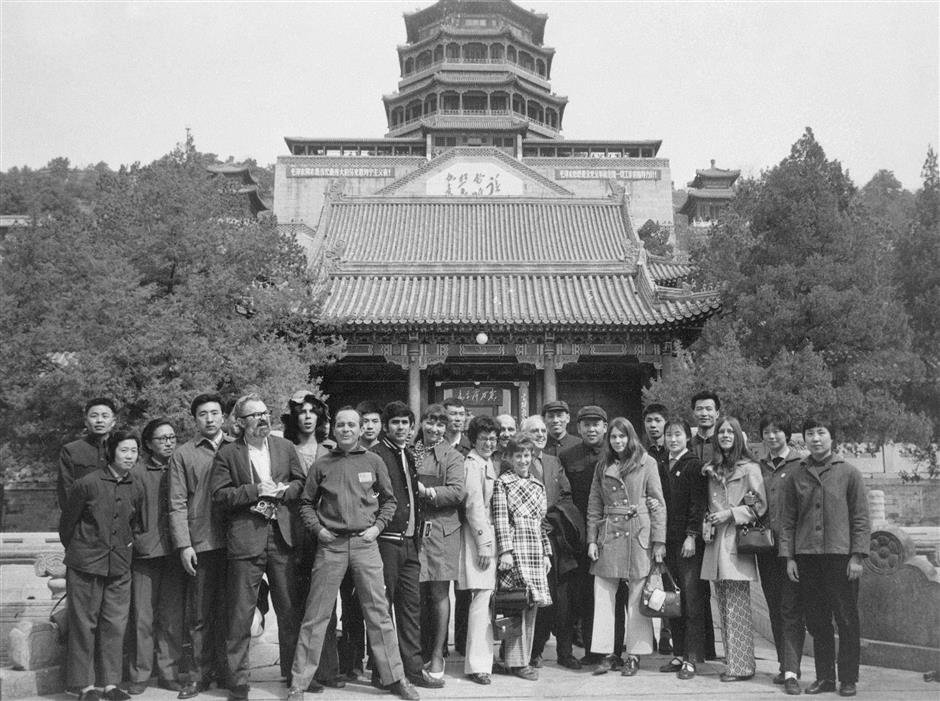 The United States Table Tennis Team poses for a portrait with their guides in front of a pagoda at the Summer Palace near Beijing, China in 1971.

Sheri Cioroslan, former president of USA Table Tennis, told her story in her video speech of how she got to know Ping Pong Diplomacy at a young age and decided to choose table tennis as her sport.

After Cioroslan became president of USA Table Tennis in 1999, she decided to revive the China-US friendship in terms of table tennis. She recalled memories about the 35th and 40th anniversary celebrations of the Ping Pong Diplomacy in 2006 and 2011.

“There are so many memories to cherish and so many more to make,” she said.

Sha Hailin, chairman of the Shanghai People's Association for Friendship with Foreign Countries, gifted eight Chinese witnesses the "Ping-Pong Diplomacy" souvenir medals and Ping-Pong paddles. The souvenirs for American witnesses were received by James Heller, the US Consul General in Shanghai.

Guests were shown around the China-US Ping-Pong Diplomacy 50th Anniversary Exhibition at the museum, where photos, collections and videos were displayed to help the audience look back on history. 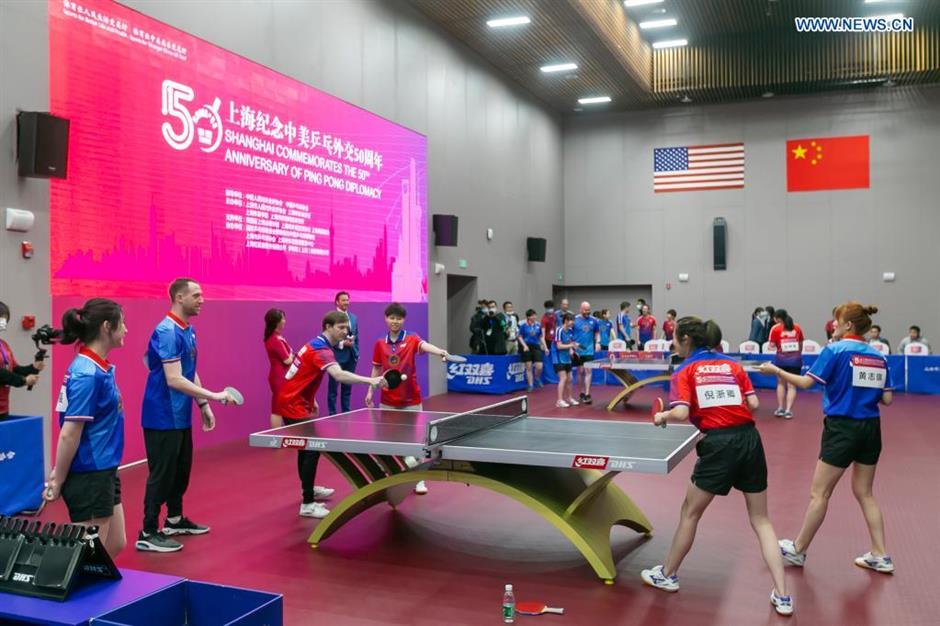 Players from both sides warm up prior to a China-US Ping-Pong friendly match during a special event in Shanghai, east China, April 10, 2021.