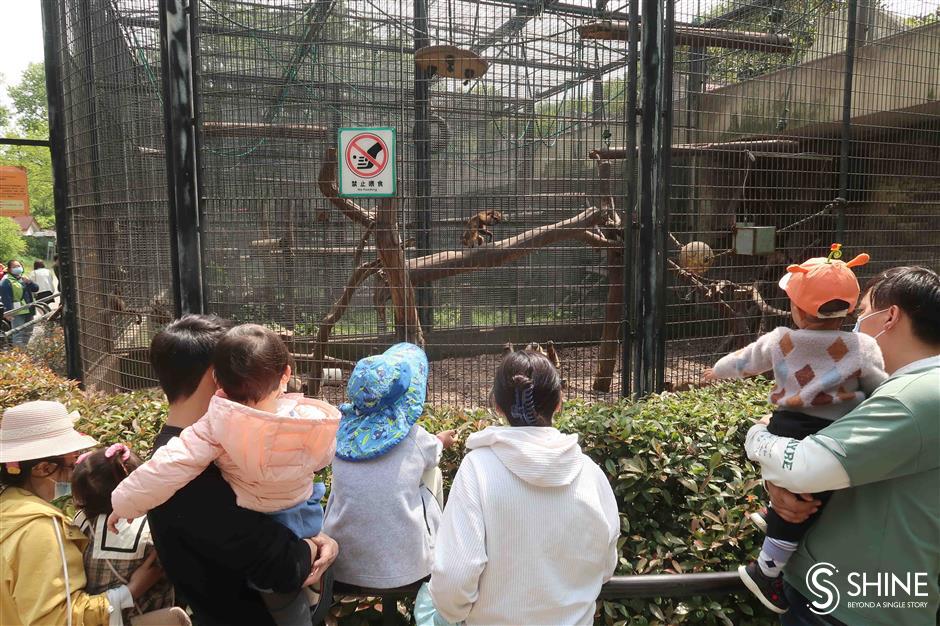 A sign advising people not to feed the animals. 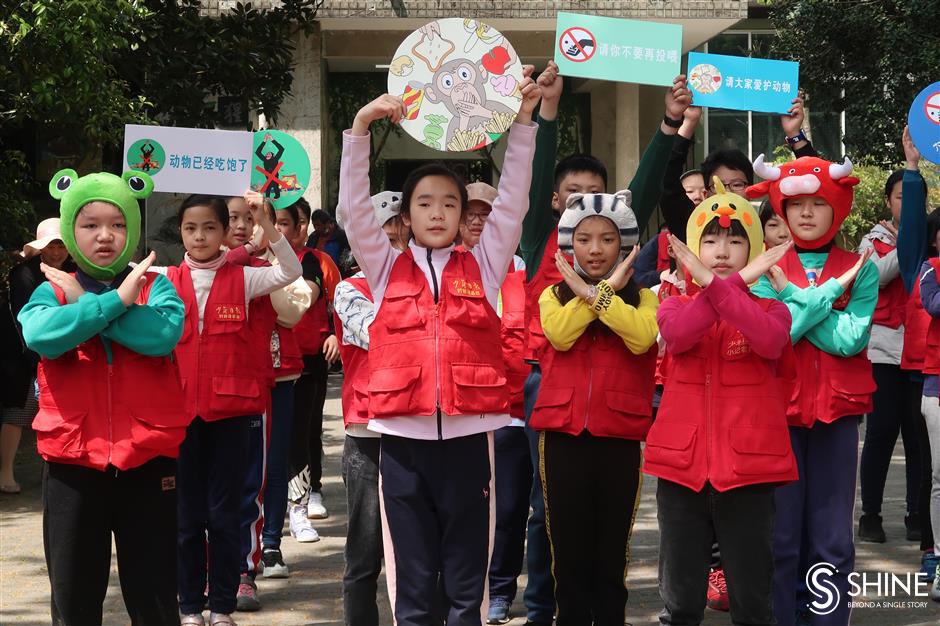 The Shanghai Zoo held a promotion on Sunday to raise awareness of the problems posed by visitors feeding its animals.

With the warmer Spring weather, more people are coming to the zoo, and their has been a  rise in the number of animals with intestinal obstructions and digestion problems.

The zoo is taking measures such as enhanced patrols, more signs and more leaflets. It is also organizing activities to spread the message that feeding by visitors is not welcome.

There is still a long way to go to make tourists fully aware of the potential hazards of feeding and eliminate such acts, the zoo said.

"Some animals have suffered from diarrhea due to feeding, and Tai Sen, an orangutan living at the zoo, in his 40s, now has diabetes because of feeding," said Zhang.

"He never resisted against any food from visitors and now he suffers from hypertension, diabetes and high cholesterol as a result," he said. "Every week, he has his blood sugar tested to ensure he is healthy."

"When animals are fed for a long time by visitors, they will also refuse food balanced in nutrition prepared by zoo keepers.

"I once found Fa Fa, a monkey, curled in corner alone, and I realized there was something wrong. I found his finger was hurt and there was a knife inside the cage which was dumped by a tourist," he added.

"It took three months for Fa Fa to recover." 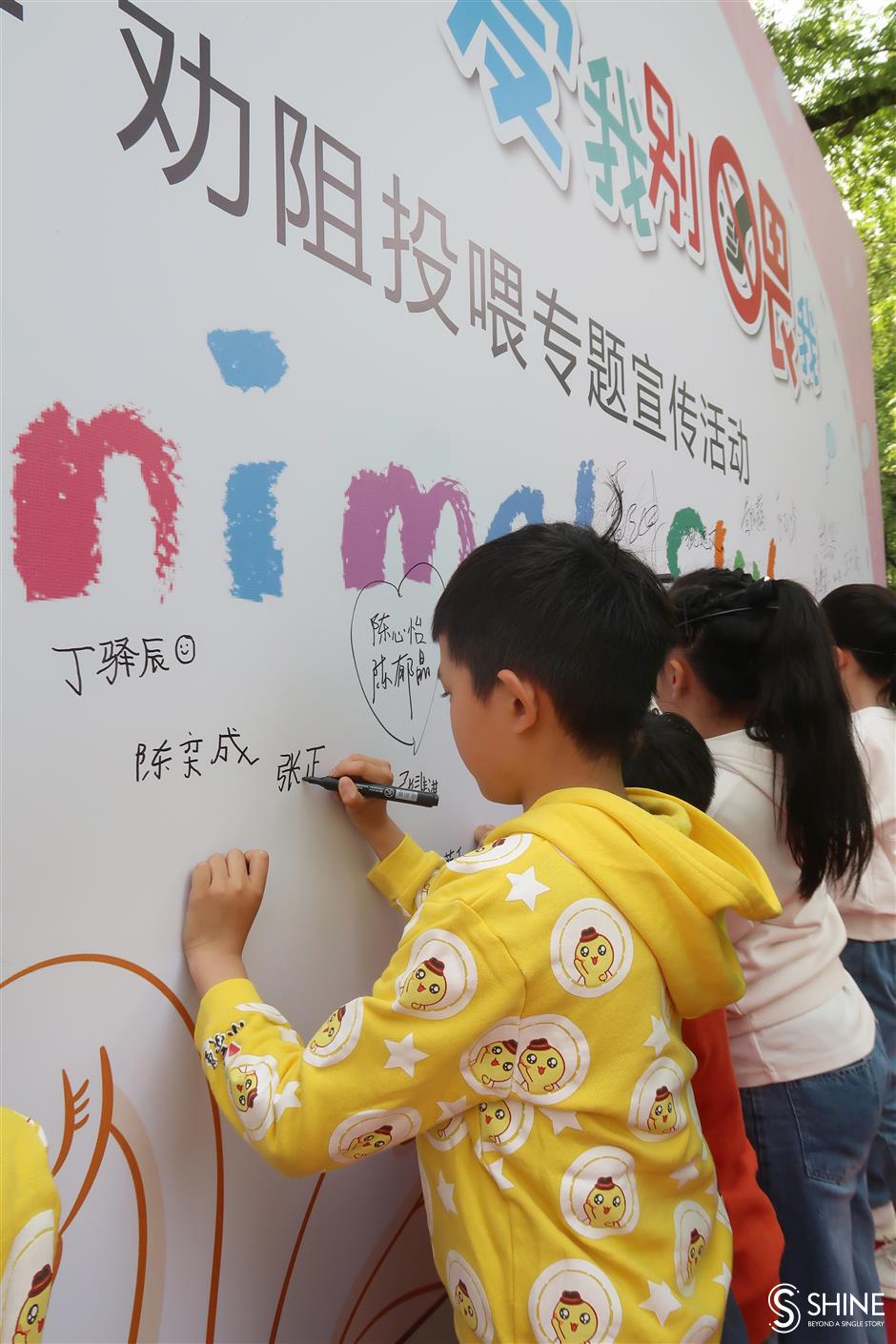 Children sign their names, promising they will not feed animals.

Serious feeding from visitors was observed by Yang Junjie, a keeper of sun bear, a first-class national protected animal.

"I see visitors feeding sun bears various types of food such as ham, vegetables and fruits every day," said Yang.

"These even include tablets and bamboo sticks.

"I use trumpets calling them to stop such acts, but some just turned a deaf ear.

"Once, a sun bear vomited after having ice tea from visitors, who ran away when I tried to educate them.

"Another time, a senior dropped a handful of tablets. I cleared them immediately, preventing serious risks.

"Many tourists bring bread and biscuits to attract swans, wild geese and ducks at the water platform, but they never eat these in the wild," he said.

"They eat leaves, seeds, sprouts and stems, and sometimes molluscs and aquatic insects. Bread and biscuits are high-calorie carbohydrates, which will lead to indigestion in birds."

Another keeper, Geng Guangyao, said: "Herbivorous animals never resist any food, and they even eat plastic bags, which seriously damages their health.

"Being unable to discharge these items, they suffer from intestinal obstruction."

Yang Huiqiang, a keeper at the bear enclosure, said: "Feeding will trigger food begging, which in turn leads to more feeding as a result, creating a vicious circle." 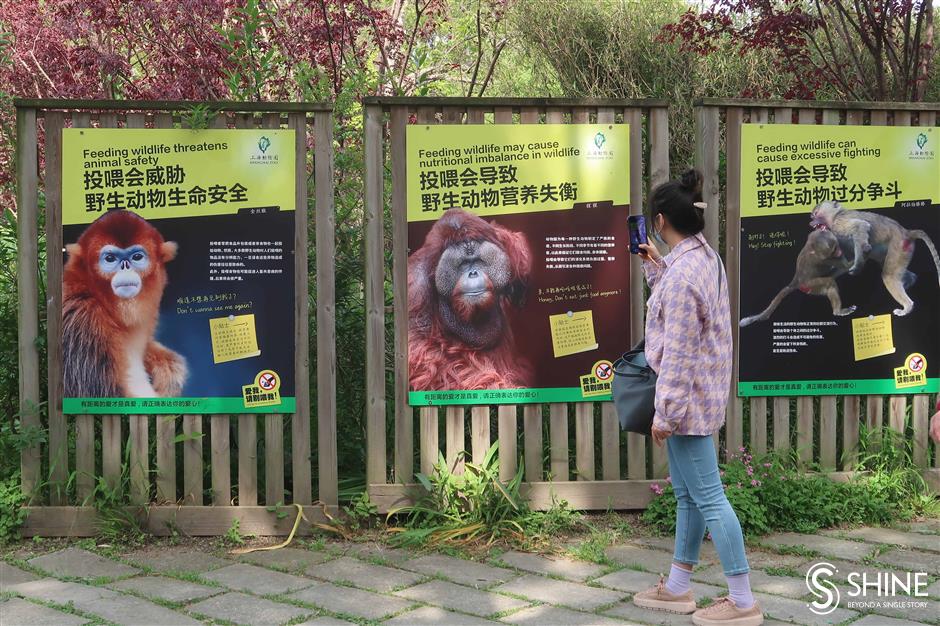 Compared with animals in open areas, amphibians and reptiles face less of a threat from feeding, but a sulcata tortoise at the zoo once suffered damage to its digestive system after eating the plastic label from a water bottle dumped by a visitor.

Plastic paper and plastic pieces were found in its excrement after animal keepers fed the tortoise grass to stimulate its digestive system.

Feeding from tourists may lead to nutritional imbalance of animals as they will not eat food from animal keepers after taking tourists' food, thus affecting their healthy growth and reproduction, said the zoo.

Obesity and diabetes are some other health problems as most foods from tourists contain high amounts of sugar or starch. Animals may also suffer from diseases such as diarrhea, colds or hepatitis.

Ingesting plastic bags will lead to the death of animals in serious cases.

In May, 2015, three fallow deer died within two weeks at the zoo from gastrointestinal obstruction. Their stomachs were found to be filled with plastic bags and paper towels.

Zhang Ziyi, a student of East China University of Political Science and Law, is a volunteer at the zoo. Her duty is to prevent visitors from feeding animals.

"People feed bananas and vegetable leaves to hamadryas," she said.

"I serve as a volunteer because the acts really cause serious harm to animals." 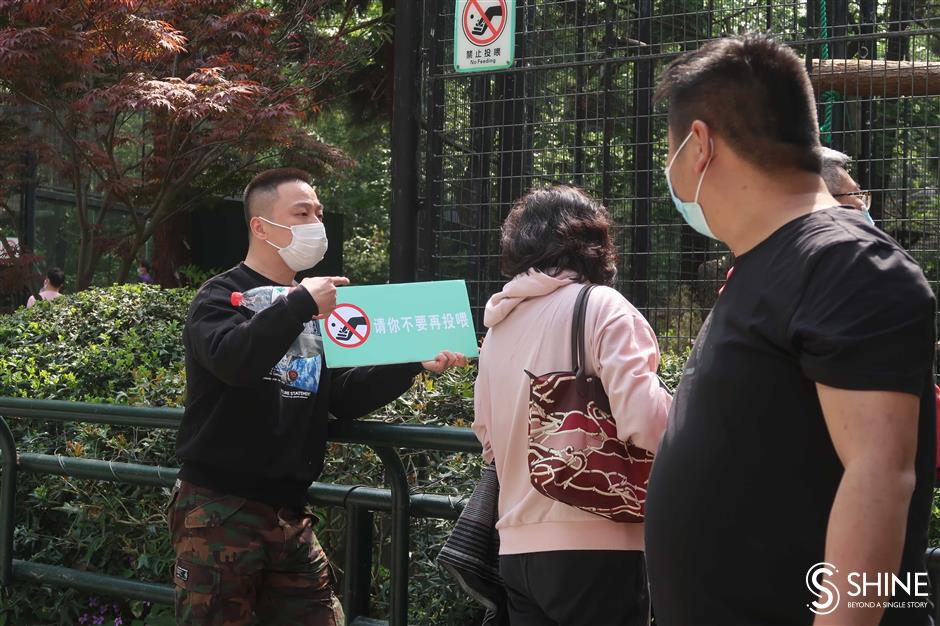 Some visitors feed animals out of a misunderstanding they are hungry or it is good to give some snacks to them, which is not true, the zoo said.

The zoo said although its visitor number dropped more than 50 percent last year from 2019 due to the COVID-19 pandemic, affecting its income, its feed expenditure grew 3 percent to ensure nearly 6,000 animals have a healthy and balanced diet.

The zoo has established an animal feed distribution and delivery center and the food supply to animals is adjusted based on different seasons and animal conditions such as pregnancy or sickness.

The center is like a small wet market with diversified food from various fish and shrimps, to beef, mutton, pork and vegetables.

Even grasses are planted to ensure fresh food for herbivorous animals and grains like corn and wheat are processed and mixed before supply.

At the gorilla and giant panda pavilions, their food is displayed and animal keepers show how they feed animals in a scientific way.