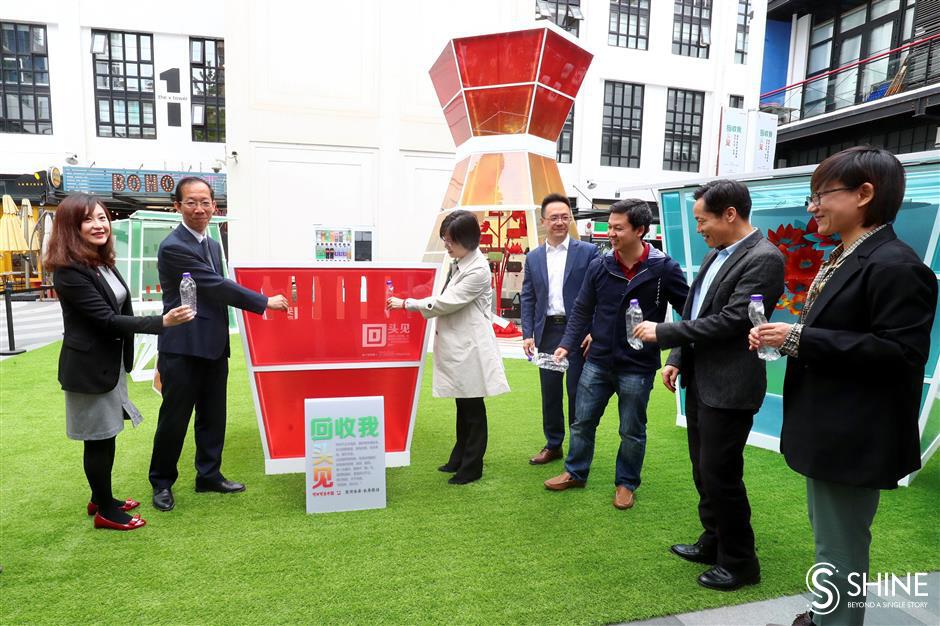 Plastic bottles can be a source of pollution or art creations and stylish commodities, depending on the way of recycling and innovation.

An aesthetic service station and art exhibition was launched at the X Tower Innovation Park in Putuo District’s Changshou Road Subdistrict on April 22, World Earth Day, to showcase how waste bottles can be recycled and given a new lease on life.

The exhibition, themed “Recycle Me and See You Around,” was jointly launched by Coca-Cola China, the Changshou Road Subdistrict and Shanghai Daily, and will be open to the public for a year along Suzhou Creek.

The waterfront station is comprised of three innovative art installations titled “Recycle Me,” “See You Around” and “I’m Back.” They display the sustainable life cycle of the bottles — from plastic, PET particles and fabrics to clothes and other daily products.

The station enables visitors to touch the recyclable materials to promote a sustainable lifestyle and new garbage-sorting measures at the community level, according to the organizers. 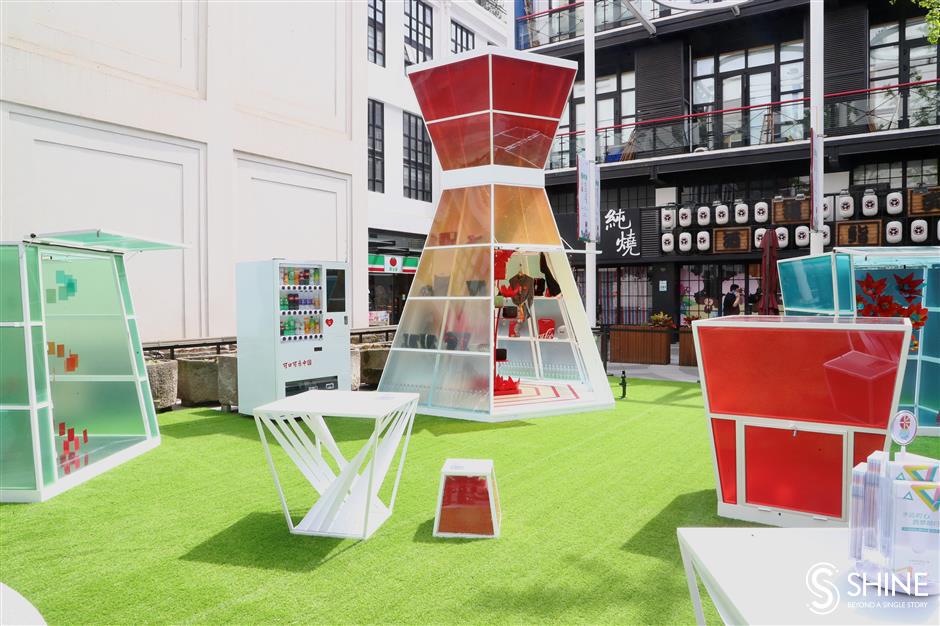 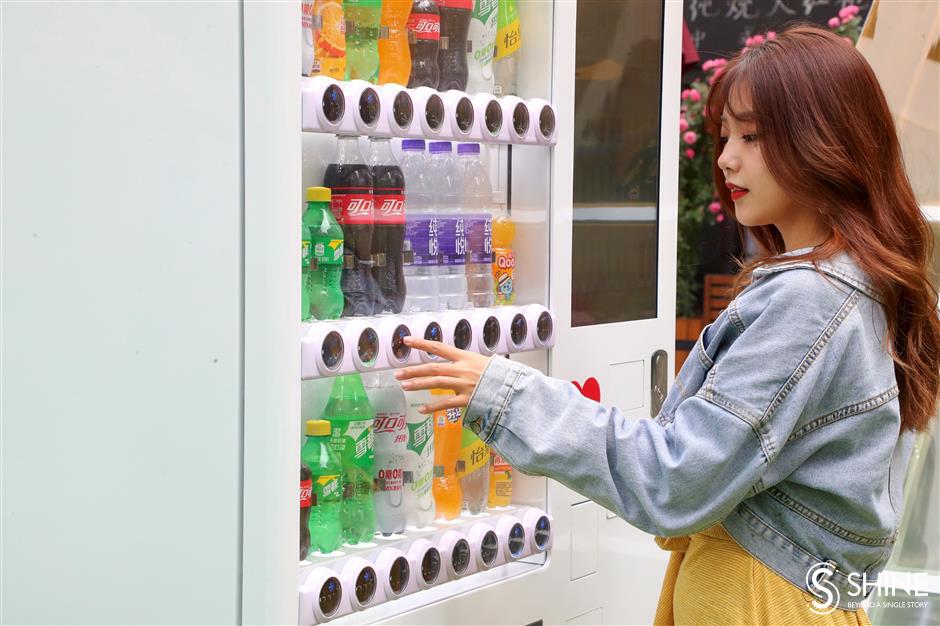 A visitor purchases a bottle of Coca-Cola to take part in the recycling campaign.

“The community station will not only become a recreational site for people, but also a place to acquire environmental protection knowledge and art inspiration,” said Zhao Ping, Party secretary of the subdistrict.

The “Recycle Me” installation is a recycling bin for more than 7,000 plastic bottles. It encourages the public to flatten the bottles before dumping them into the bins.

“See You Around,” a nearby transparent bench, displays PET particles recycled from more than 900 bottles and fabrics from over 1,200 plastic bottles.

The “I’m Back” installation is in the shape of a huge sand clock and exhibits decorative flowers made with more than 18,000 bottles, artworks and bags, T-shirts, hats, umbrellas and scarves made of fabrics recycled from around 60,000 bottles.

During the exhibition, residents can exchange bottles and drink packages for different varieties of Coca-Cola drinks at a dozen designated spots across the subdistrict.

The PET materials recycled from packages collected from residents will be turned into public facilities to benefit communities. 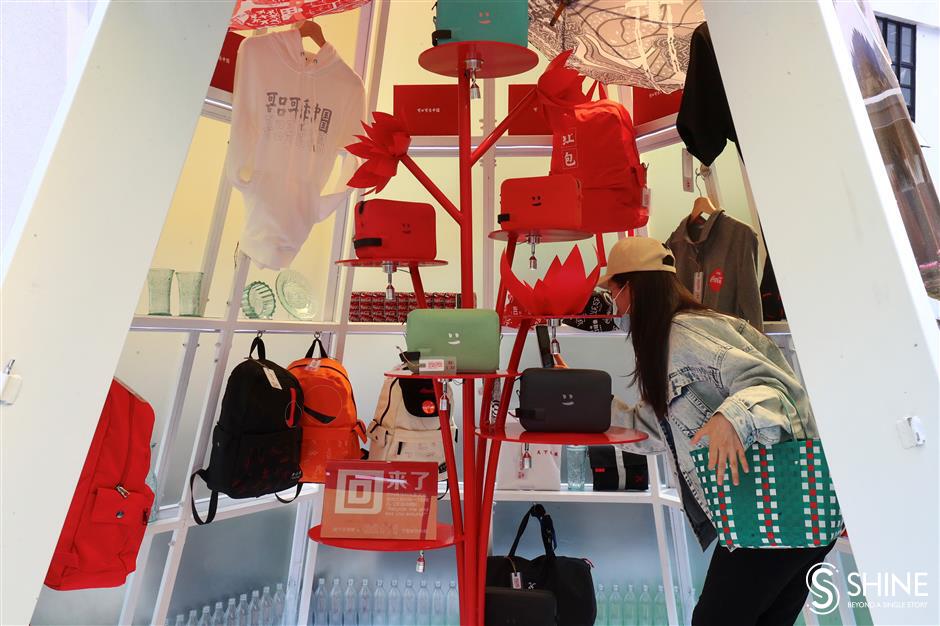 A visitor checks out clothes, bags and other commodities made of recycled plastic bottles.

Zhang Jiantao, vice president of Coca-Cola China and Mongolia, said such artistic community exhibitions should educate the public about the value and meaning of recyclable bottles and inspire people to take part in the eco-friendly campaign.

Coca-Cola has created a series of products made from recycled plastic bottles, even using recycled PET fabrics to make furniture such as tables and chairs.

Coca-Cola China is well on its way to achieve a “World Without Waste,” a sustainable packaging vision initiated by Coca-Cola Chief Executive Officer James Quincey in 2018.

In line with that vision, Coca-Cola aims to collect and recycle a bottle or can for every one it sells, and make 100 percent of its packaging recyclable.

A roundtable forum themed on “social responsibility of multinational enterprises to rebuild an international community” was held after the station’s launch ceremony. Representatives from Coca-Cola China, the subdistrict, Shanghai Daily, the city’s foreign affairs office and Fudan University shared their opinions on the topic.

Zhao noted that social governance in the downtown areas of international cities should respond to public demands, reach higher standards and invite more people to participate. 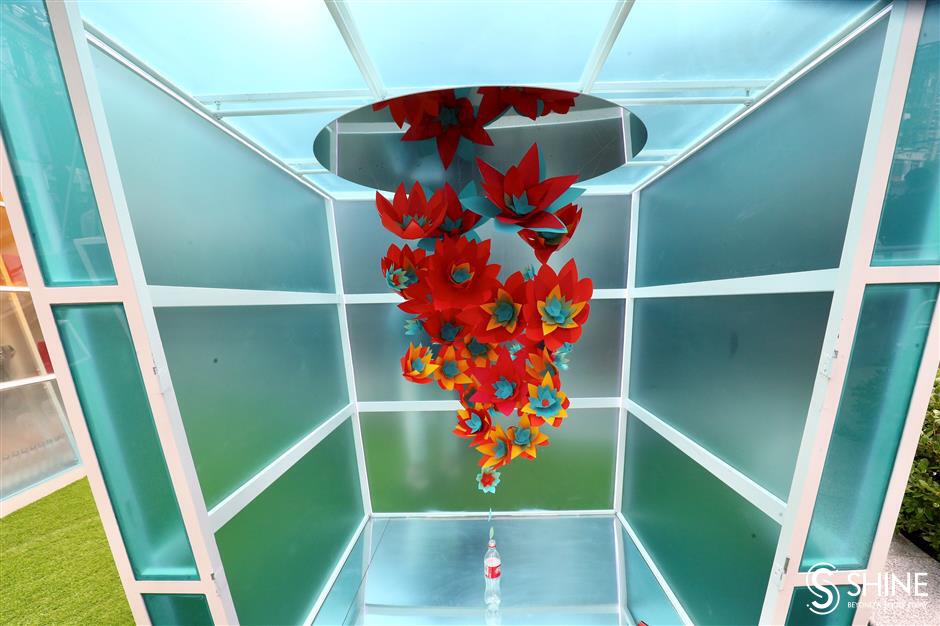 An art installation made of recycled plastic bottles

“Through the event, the Changshou Road Subdistrict aims to become a platform to collaborate with multinational companies and promote local communities globally,” Zhao told the forum. “The subdistrict can also become an important outlet to tell China’s community stories to the world.”

Putuo District has the longest and most zigzag downtown section of Suzhou Creek, known as the 18 bays, featuring many of China’s earliest national industries. Most of the heritages have been preserved in the Changshou subdistrict.

The waterfront section near X Tower Innovation Park, known as Baocheng Bay, was home to a fifth of China’s earliest textile factories dating back to the 1920s. After 1949, the Shanghai No. 1, 6 and 7 cotton factories were located on the waterfront, along with a military warehouse for quilts and uniforms. The site was dubbed the “cradle of China’s textile industry.”

X Tower Innovation Park was developed from a century-old military warehouse, with most of its main structures preserved. The park, redesigned by Italian designer Per Erik Bjornsen, is now home to about 100 cultural industry startups. The original cargo elevators have been preserved, and a former watchtower at the site offers visitors a panoramic view of the scenery along the creek. 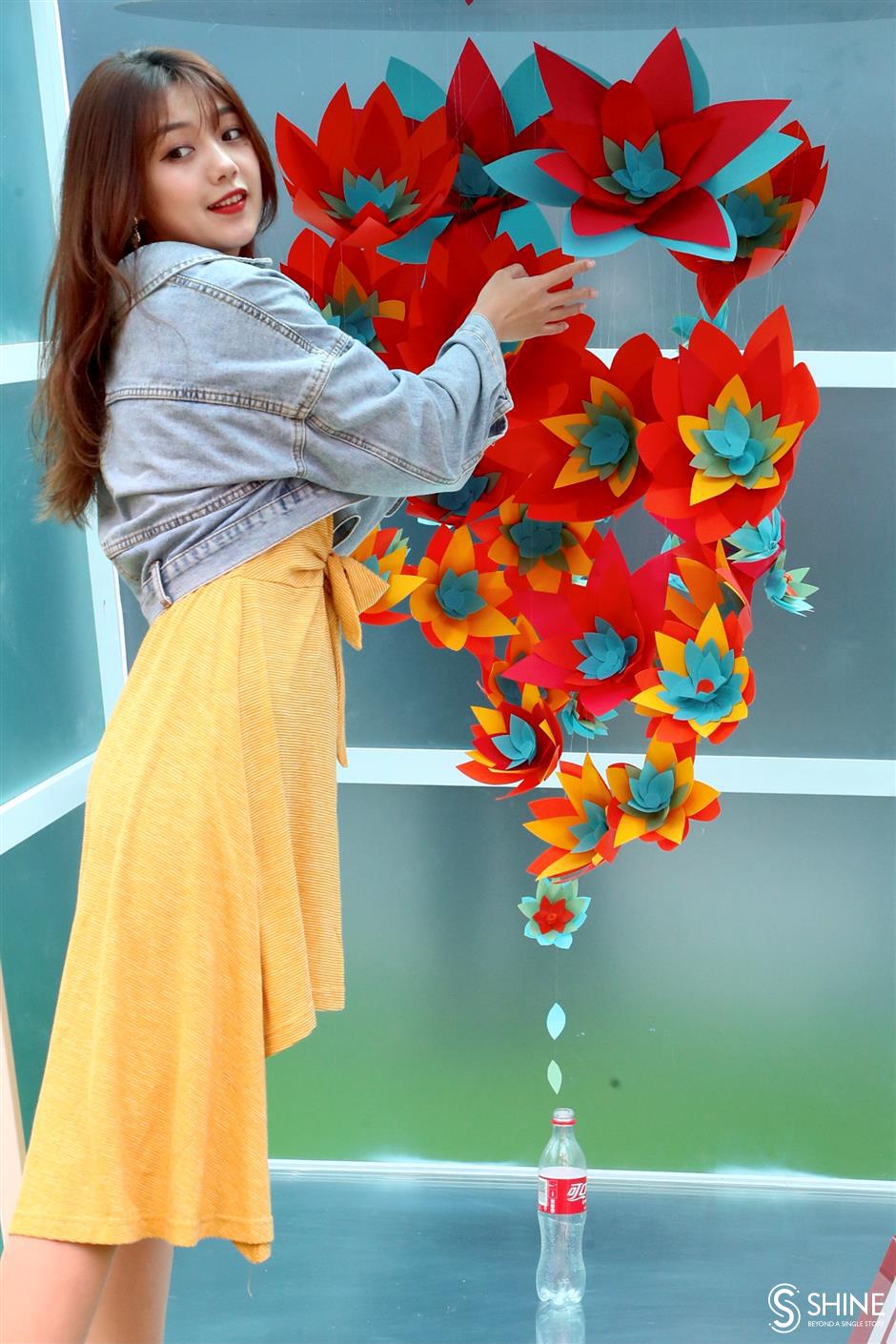 A visitor poses with an art installation.