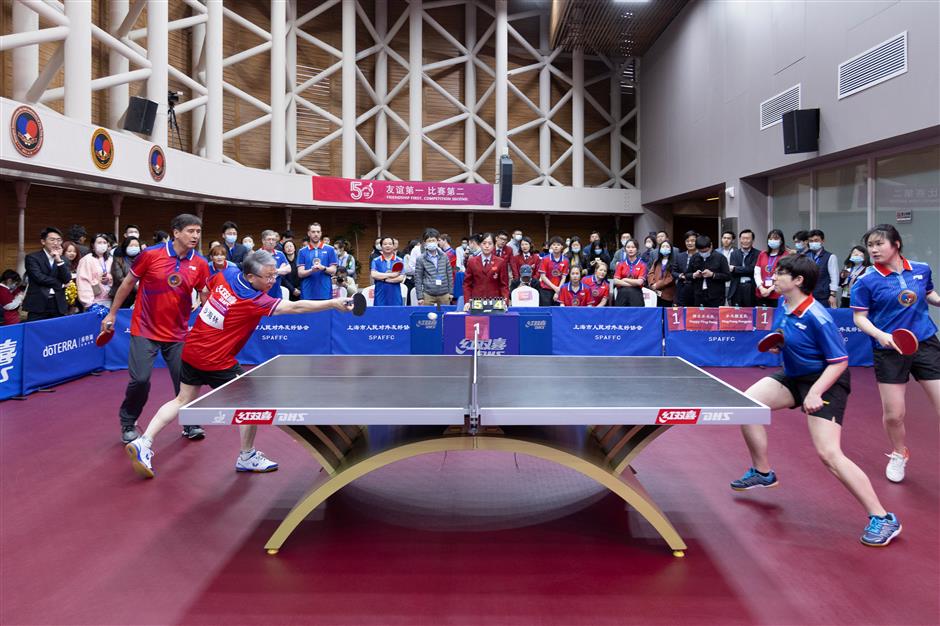 Sha Hailin (second from left), chairman of the Shanghai People’s Association for Friendship with Foreign Countries, pairs with Ker Gibbs, president of the American Chamber of Commerce in Shanghai, in a friendly match against their opponents earlier this month to mark the 50th anniversary of “ping pong diplomacy.”

After a friendly match of Chinese and US table tennis players this month, Sha Hailin praised the enduring grassroots friendship of both countries.

Sha is chairman of the Shanghai People's Association for Friendship with Foreign Countries.

The event marking the 50th anniversary of “ping pong diplomacy” partnered 13 Chinese and 13 Americans. Sha paired up with Ker Gibbs, president of the American Chamber of Commerce in Shanghai.

He said Gibbs proposed the celebration and it dovetailed well with the association’s plans to honor the 1971 visit of the US table tennis team to China – the first American group to step foot on the Chinese mainland since the founding of the People's Republic of China in 1949.

“The idea of a friendly competition proved popular,” Sha said, noting support from the American chamber, New York University Shanghai, the US consulate general, local businessmen and other expats.

Some of the participants weren’t dab hands at ping pong, and some were even playing for the first time, but all-around enthusiasm made up for any performance gaps. Several players spent more than a month to train for the matches, Sha said.

“Their enthusiasm made me feel the importance of exchanges between Chinese and American people,” Sha said.

“The China-US relationship is very important and complicated,” he added. “Its development has not been always smooth. It has weathered ups and downs, but cooperation lies at its heart. Both countries must have the wisdom and courage to seek common ground, putting differences aside.”

Gibbs said the American chamber was delighted to join the Shanghai association in commemorating the historic event.

He said the bilateral table tennis matches aimed to “get that story out, to make more people aware of what happened, and to reinforce good feelings in US-China relations.”

Today, that relationship is under strain.

“We acknowledge the problems, but we also celebrate the success we’ve had,” Gibbs said. “We appreciate the positives the two countries are undertaking, most in the commercial realm. We see this anniversary very much something to celebrate. Maybe there will be other moments when something unexpected will happen that will demonstrate the capability to get back to a high level of trust.”