From huangjiu cake to xiasha shaomai, from Iranian pottery to Syrian soap, more than 400 local and exotic products are on offer in two pop-up fairs which opened on Saturday in bustling Lujiazui in the Pudong New Area. 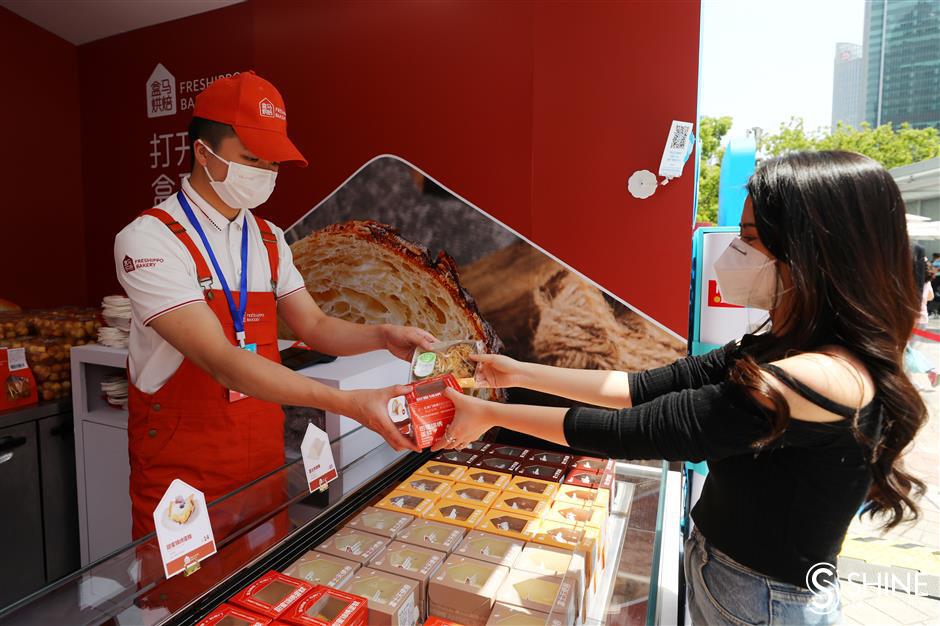 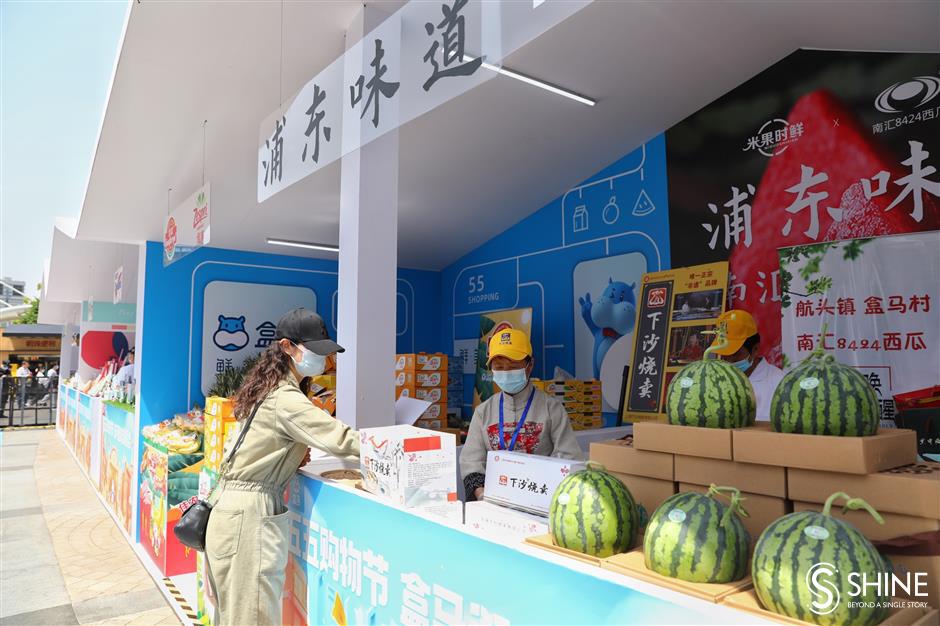 Pudong's delicacies and fruits are on sale.

Of the products, more than half are Shanghai, China and global debuts, and 36 have been displayed at the China International Import Expo, according to Wu Jun, deputy director of the Pudong Commerce Commission.

The five-day food fair was unveiled on Saturday morning at the foot of the Oriental Pearl TV Tower. It raised the curtain on Pudong’s shopping frenzy.

Shanghai people also like congyou, scallion oil, which is used in many of Shanghai’s signature dishes such as scallion pancake and scallion noodles. When the complex umami flavor of congyou adds to the traditional French pastry, a new East-meets-West delicacy is produced.

According to Wu, it’s easy for visitors to have a look and take a stroll around the fair as it’s right  in the square of the Oriental Pearl TV Tower. Express service is available to deliver Shanghai taste to the nation. 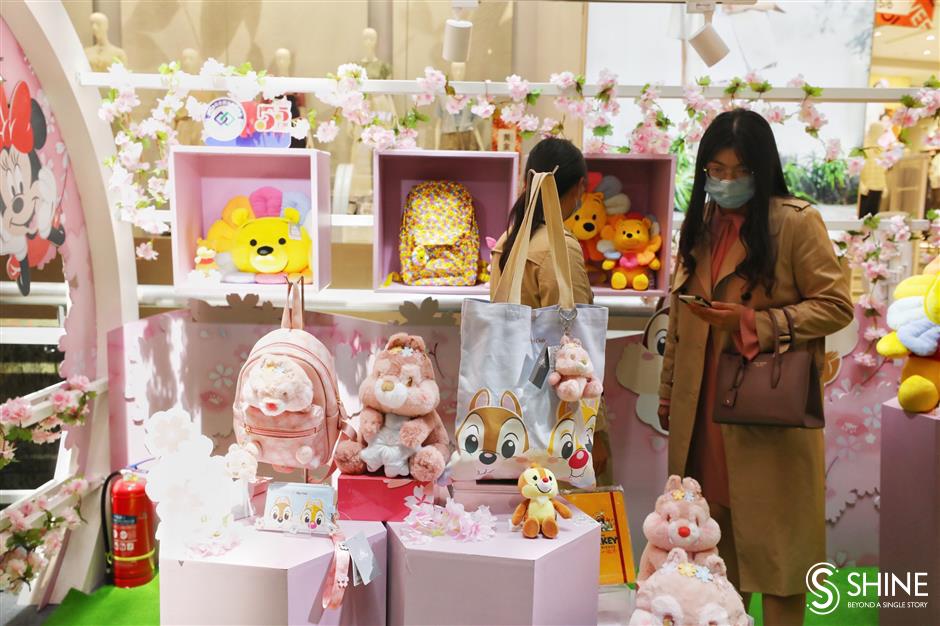 New Disney merchandise is on display. 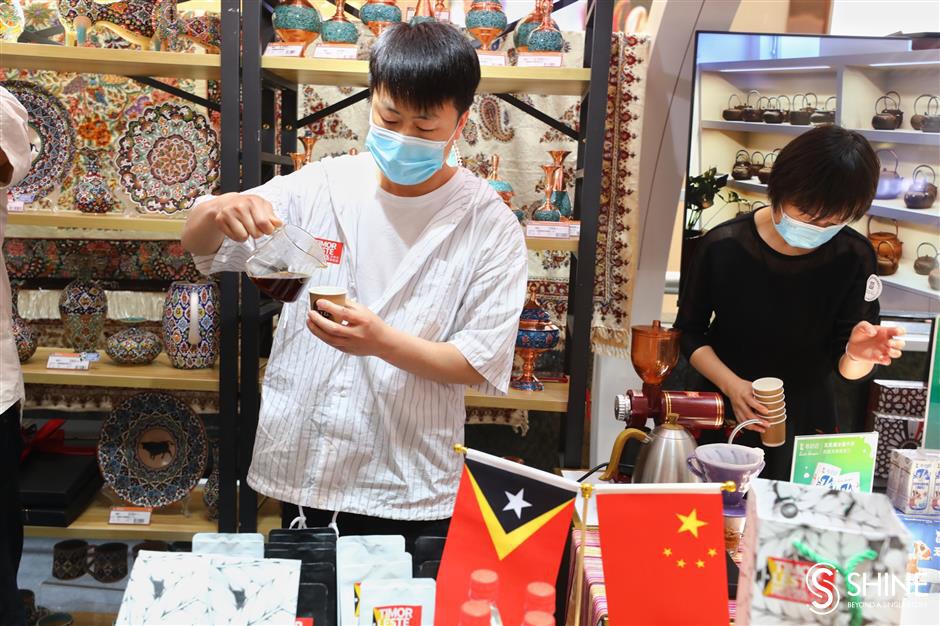 Coffee from Timor Leste is free to taste.

At Super Brand Mall across the street a pop-up fair with goods from all over the world has opened. It will run through May 16, offering high-quality goods at favorable price.

Sales people are wearing traditional clothes from Thailand to promote the country’s fruits, birds' nest and frozen products including shrimp. New Disney merchandise from bags to toys to celebrate this year's fifth anniversary are also displayed.

Coffee is a pillar industry of Timor Leste, accounting for 90 percent of the total export trade. It produces premium arabica coffee, especially kopi luwak that is commonly known as “cat-poo coffee.” But it’s less known by many Chinese.

To promote the country’s coffee culture, traders set up a stall, inviting visitors to have a sip of kopi luwak. Although unorthodox, it is one of the costliest coffee beans in the world.

“We just produce about 800 kilograms every year," said a saleswoman. "So, we don’t sell it. Instead, we send it to others as a gift of our country. But we bring the same variety that these cats eat for sale. They are of the same quality. But it's quite cheaper."

Exquisite handicrafts from Iran and Syria are another highlight of the fair.

Pottery in Iran dates back 5,000 years, and it’s known for its unique art of enameling, called minakari. A set of pottery tableware from flagons to plates are displayed for sale. The shape of the ox, the Chinese zodiac of the year, is seen in many pieces of work.

“The shape of the ox was designed based on Iran’s unearthed relics," said Julie Dong, in charge of the stall. "The ox series was especially promoted to celebrate the Year of the Ox, and it was displayed at last year’s China International Import Expo. We will later promote a series based on the Chinese zodiac's 12 animal signs."

There is also Iran’s bronzeware and wooden boxes inlaid with camel’s bones. 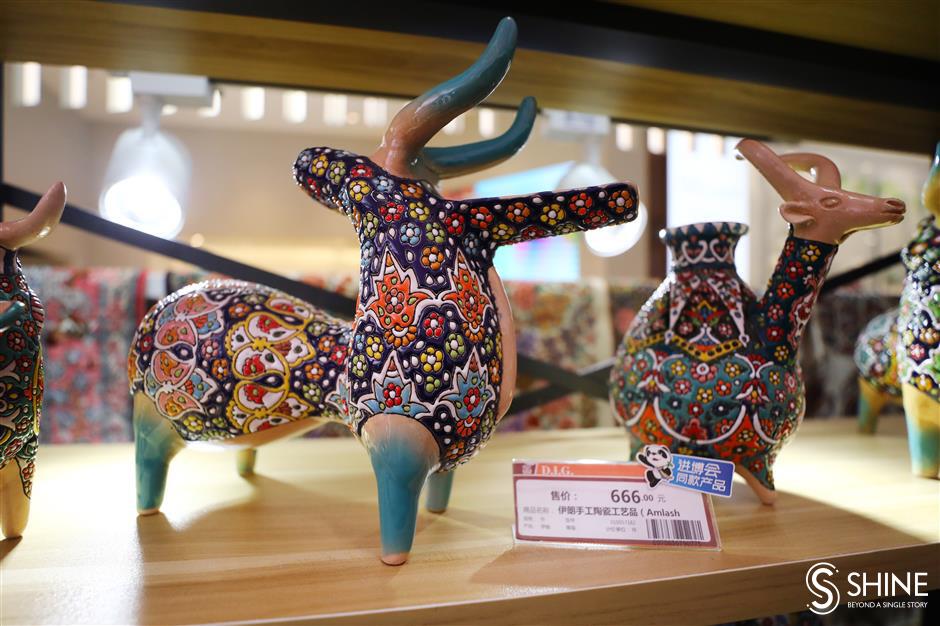 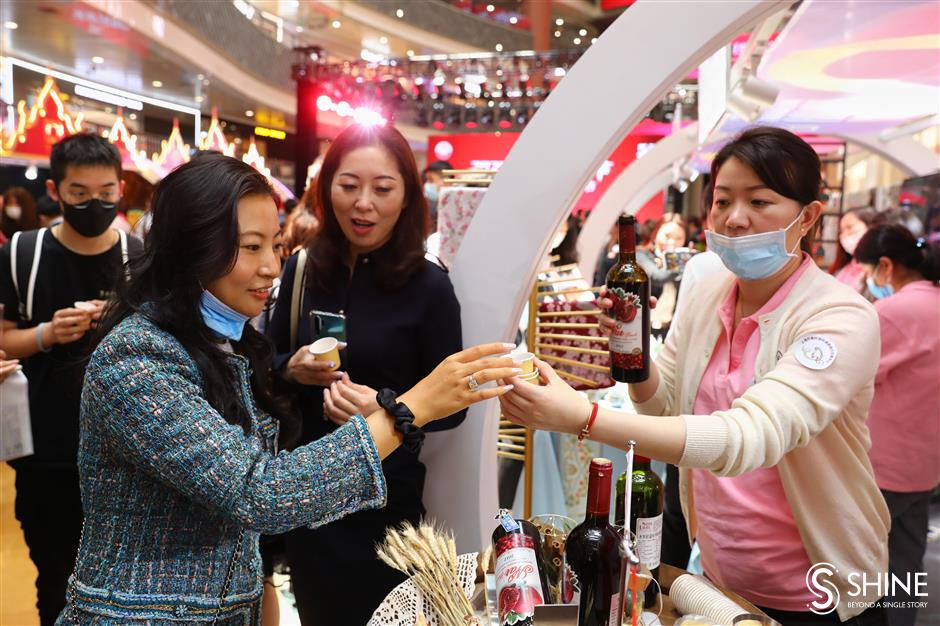 Also on the shelves, there are Syria’s famous rose water and essential oils, and hand-crafted soaps made with oil and laurel berry essential oil.

The International Exhibition and Trading Center of Wine and Beverage, based in Pudong’s Waigaoqiao bonded area, showcases pomegranate wine from Azerbaijan.

“It’s a very unique product," said a warehouse manager surnamed Liu. "Azerbaijan has a long history of wine making and it plants high-quality pomegranates. As it has just entered China, we sell it at only 99 yuan (US$15) per bottle to promote it to the domestic market.”

Another highlight, according to him, is the limited edition of Mouton Cadet for the Cannes Film Festival. It’s a Bordeaux-cultivated wine.

“We prepared 150 bottles to sell at the pop-up fair," Liu said. "One bottle is priced at 268 yuan, and customers can buy one get one free."

The stall selling Shanghai’s Butterfly sewing machines is popular with ladies. The brand started in 1919, and over the years, it has caught the digital tide. The stall features a completely automatic sewing machine.

“We developed software enabling it to scan patterns and do sewing work itself,” said Wang Ying, sales manager of Butterfly China. “We hope to tell today’s young people what sewing machines can do.” 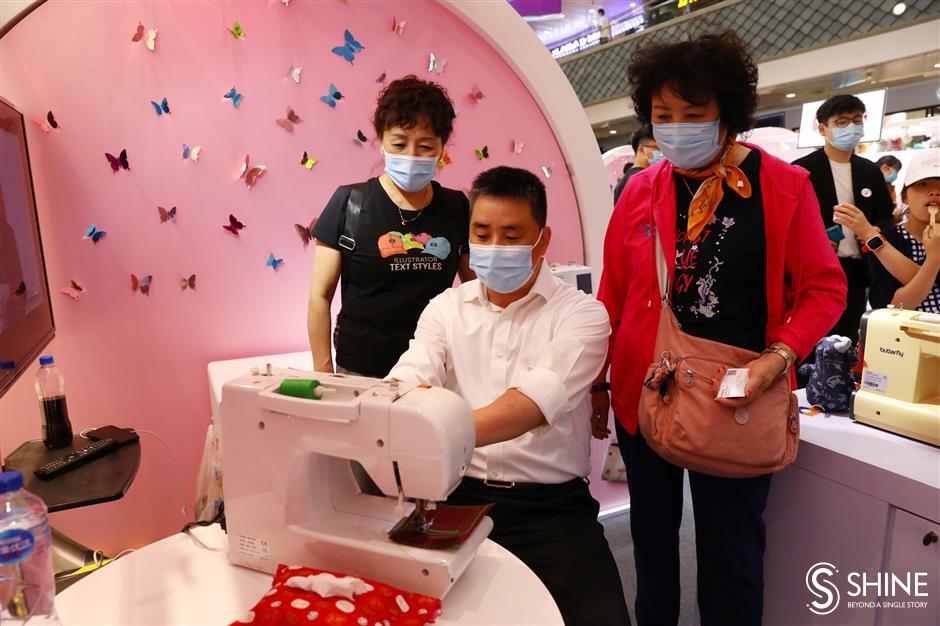 A demonstration of the automated Butterfly brand sewing machine. 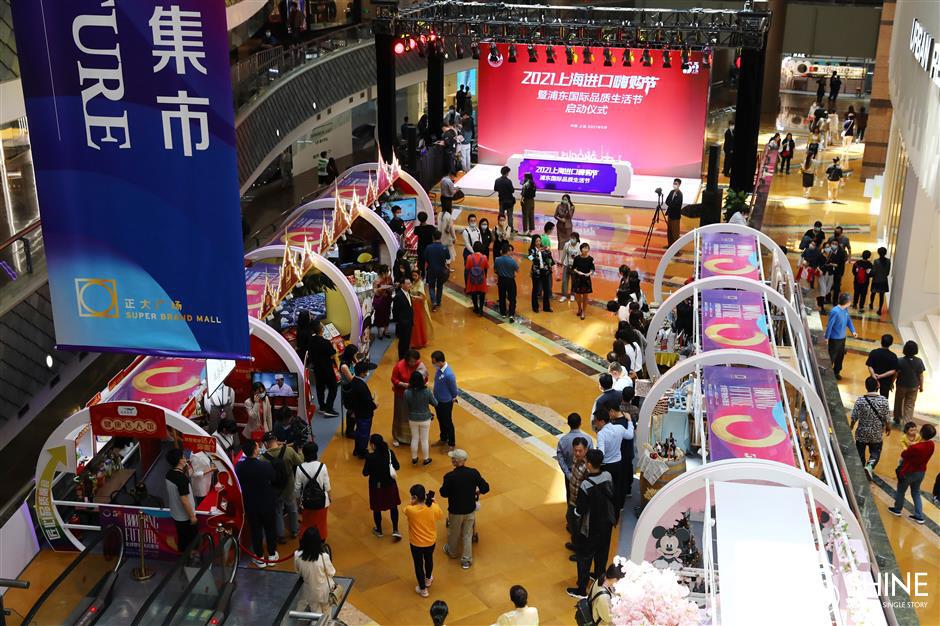 The pop-up fair at Super Brand Mall will run through May 16.

Wu said that as Lujiazui is an international commercial zone, people go there to seek high-quality products.

“So, we focus on increasing supply of high-quality products," he said. "We provide products displayed at the CIIE and imported products with a good reputation to local customers, which satisfy their needs and attracts them to make purchase here in Lujiazui.

“During the Double Five Shopping Festival, we will host 120 promotional activities involving more than 70 companies and brands to offer tens of thousands of products to the market.”