Millions on the move as city takes a break 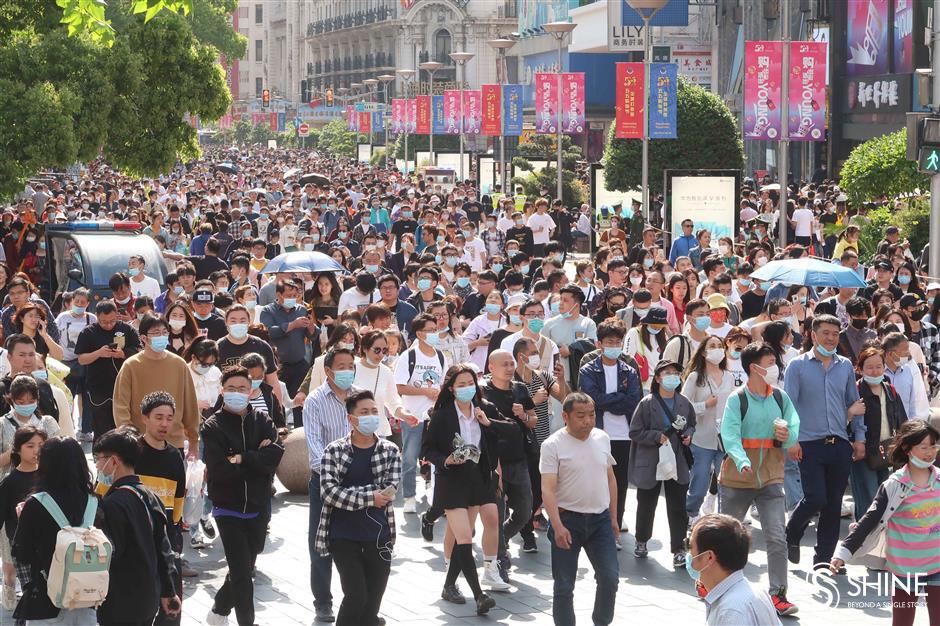 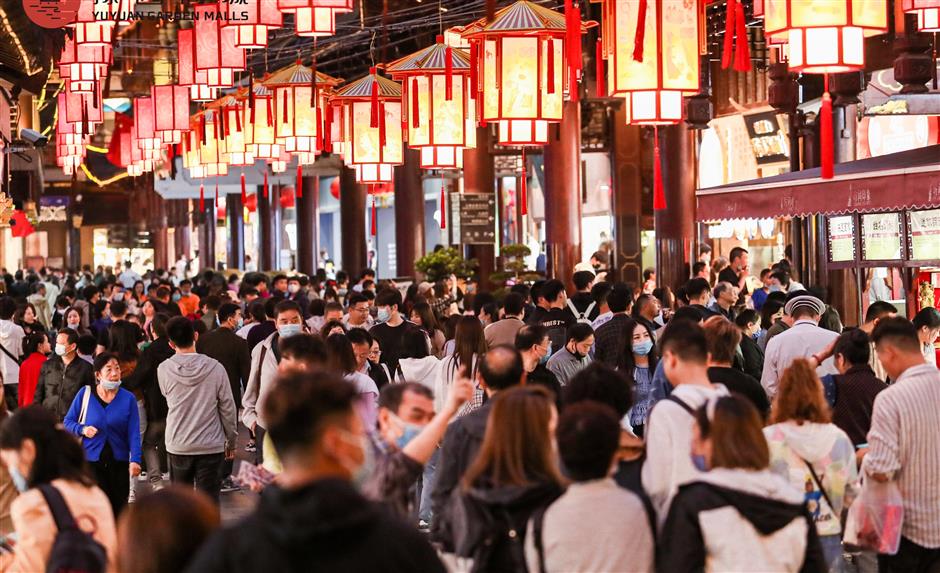 Yuyuan Garden is at its busiest with holiday visitors.

The weather was hot during the Labor Day holiday, as was the city's tourism market.

Predicted to be the "hottest May Day holiday" by online travel operators based on the number of bookings, and the "most crowded" due to the travel boom, Shanghai’s attractions were packed with visitors.

The city recorded 16.889 million tourist visits during the holiday, soaring 138.88 percent from the same period in 2020 and generating about 40 billion yuan (US$6.18 billion) in revenue, according to the Shanghai Administration of Culture and Tourism.

Average hotel occupancy rate was 71 percent, up 45 percent from last year and 15 percent more than in 2019.

Ma Shuo, a tourist from Jiangxi Province, was overwhelmed by the huge crowds on Nanjing Road Pedestrian Mall, holding his daughter's hand tightly to prevent her getting lost.

"There are too many people and I was even sweating," he said. "We moved very slowly.

“There were long queues at restaurants, shopping malls and toilets, and everywhere, which is not pleasant but understandable," he said. "All in all, it's the May Day holiday.

"At least it is good that we can now travel freely and safely," he added. 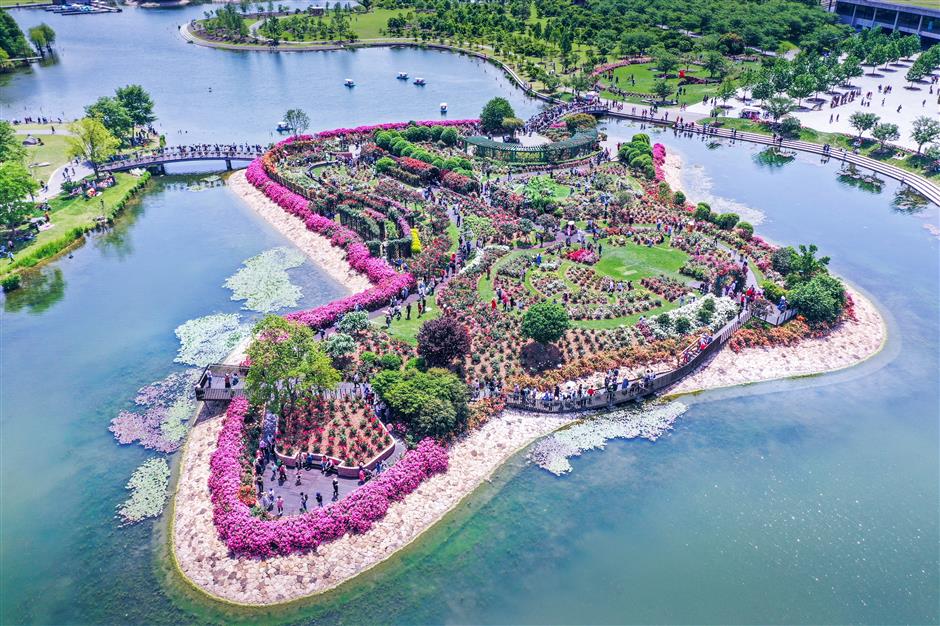 A bird's-eye view of holidaymakers at Chenshan Botanical Garden. 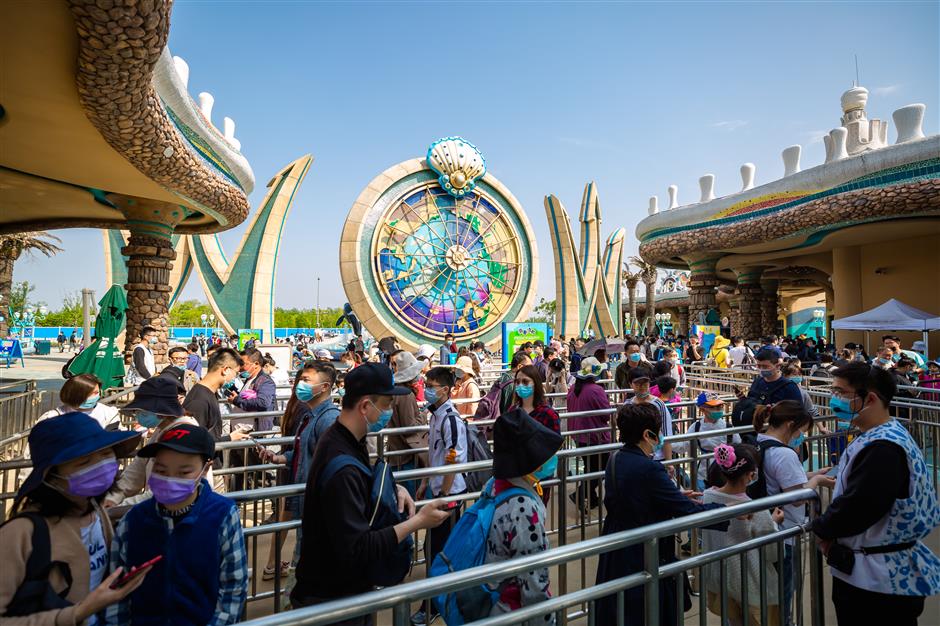 Visitors line up for their visit to Haichang Ocean Park.

Shanghai Science and Technology Museum had 125,000 visitors, soaring 774 percent from last year, while Zhujiajiao Ancient Town had 149,500, up 266 percent.

"Red" tourism sites were popular as this year marks the 100th anniversary of the founding of the Communist Party of China.

The city's eight "red" tourist sites had 74,200 visits during the holiday.

The Huangpu River cruise tour was also a popular option for tourists, the administration said.

New itineraries and products such as an afternoon tea cruise tour were launched during the holiday and around 105,300 people took cruises over the five days while 8.17 million visitors were recorded along the 45-kilometer Huangpu waterfront during the holiday, up 261 percent from last year. 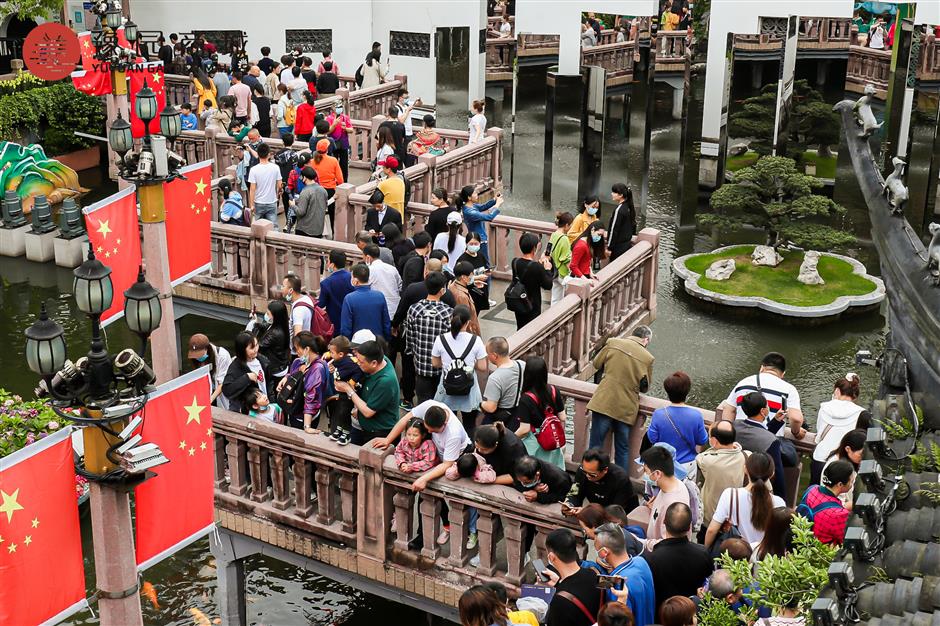 A busy zigzag bridge at Yuyuan Garden during the holiday. 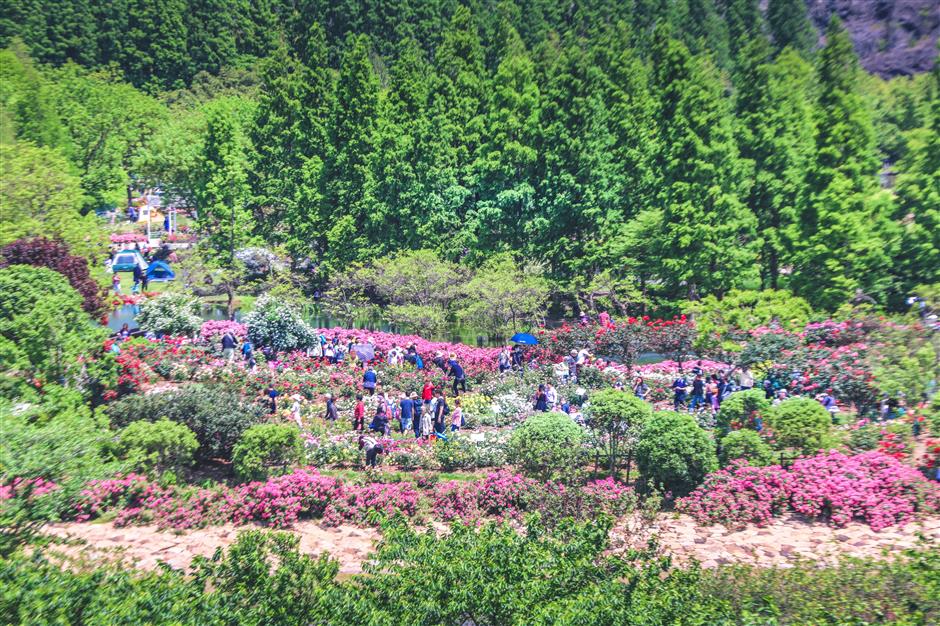 Visitors merge with the flowers in this photograph taken at Chenshan Botanical Garden. 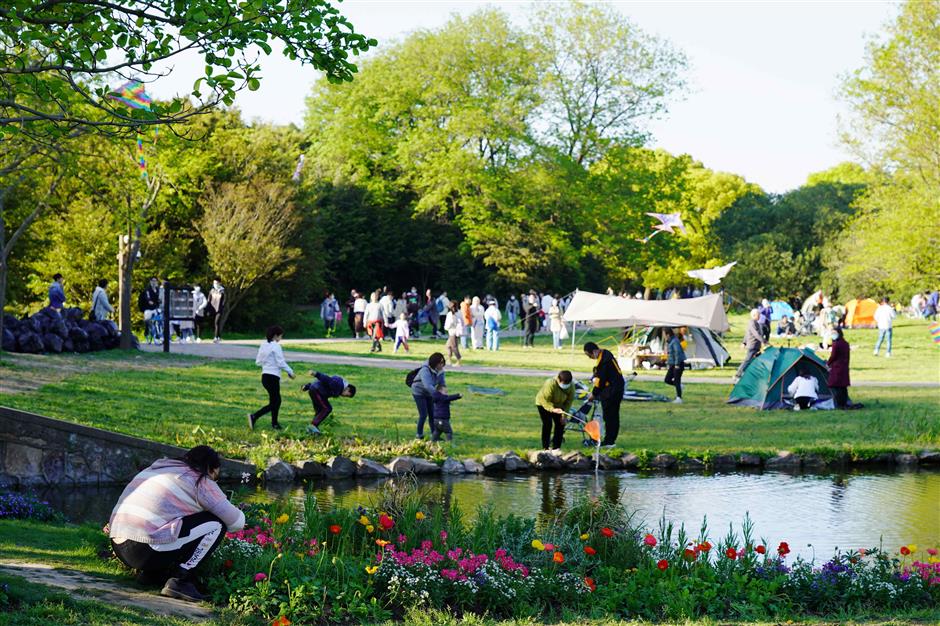 Shanghai’s five "new cities" emerged as popular destinations with a range of activities on offer.

There were night tours at the Zhujiajiao watertown in Qingpu District with light shows, Pingtan (storytelling) performances and cruises.

Performances and exhibitions were also choices for residents and tourists with a culture feast presented by theaters and other venues across the city, the administration said.

Fifty-nine art galleries in the city had a total of 130,000 visits, up 255 percent from the same period last year.

The Hengfu (Hengshan-Fuxing Road) Historical and Cultural Area had 1.57 million visits; Xintiandi 780,700 and the Sinan Mansions area over 380,000. 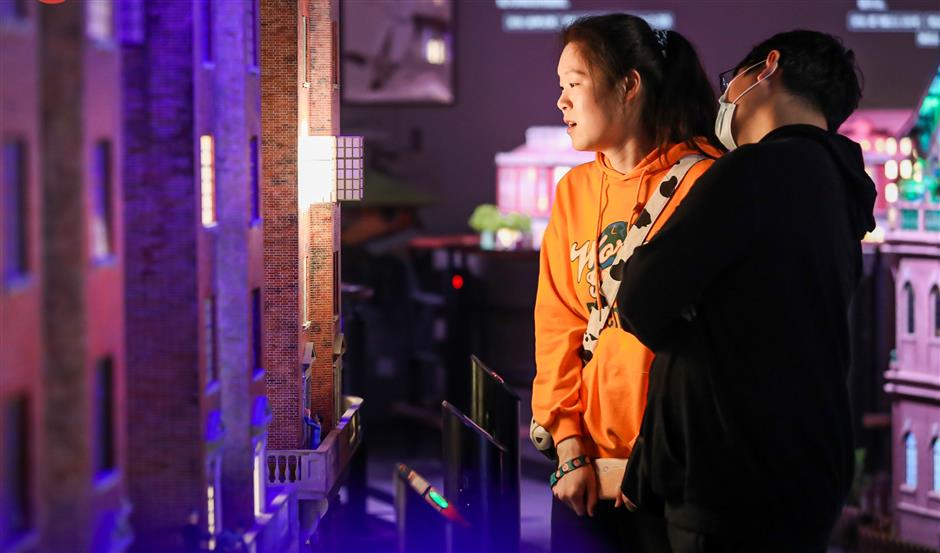 An exhibition at the Yuyuan Garden scenic area proved popular during the holiday.

The good weather persuaded many residents to get out and about.

At Chenshan Botanical Garden, nearly 1,000 varieties of Chinese roses are in full bloom.

Zhang Xiaohui, a Shanghai resident, wore hanfu, traditional Chinese clothing, as she posed for photographs amid a sea of flowers.

"These beautiful flowers brighten my mood," she said.

At Guangfulin Relics Park, musical events were held every afternoon during the holiday.

Local resident Zhang Liang and his son played pitch-pot, a traditional Chinese game involving throwing sticks from a distance into a container.

"There are a lot of activities here and my son had a very pleasant time," Zhang said.

Online travel operator Trip.com said it witnessed a surge of around 270 percent in orders during the holiday compared with the same period last year, and over 30 percent more than in 2019.

Beijing, Shanghai, Guangzhou, Hangzhou, Chengdu, Xi'an, Nanjing, Chongqing, Wuhan and Changsha were the most popular destinations during the holiday based on bookings.

Ticketing and vehicle rental services witnessed large increases, with a daily peak of ticket booking surging 449 percent from 2019, while the busiest single day for car rentals saw numbers up 330 percent compared with 2019.

Sanya, Chengdu, Haikou, Shanghai, Dali and Xi'an were some of the most popular destinations for the people hiring cars.

The items most searched for online by people in their teens and early 20s were “snack,” “night market,” “milk tea” and “iconic architecture” while those in their 30s and 40s were looking for “driving routes,” “bars” and “Sanya." 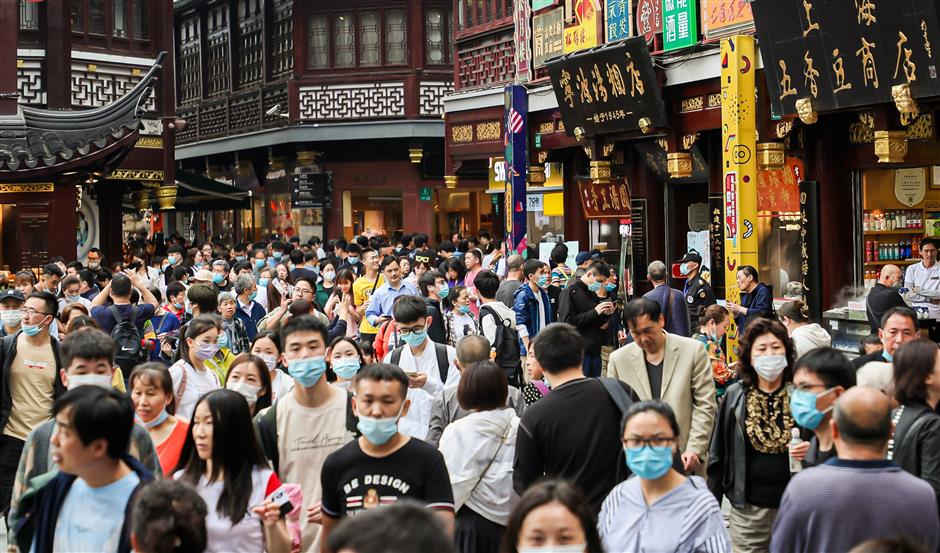 Crowds at the Yuyuan Garden scenic area during the holiday. 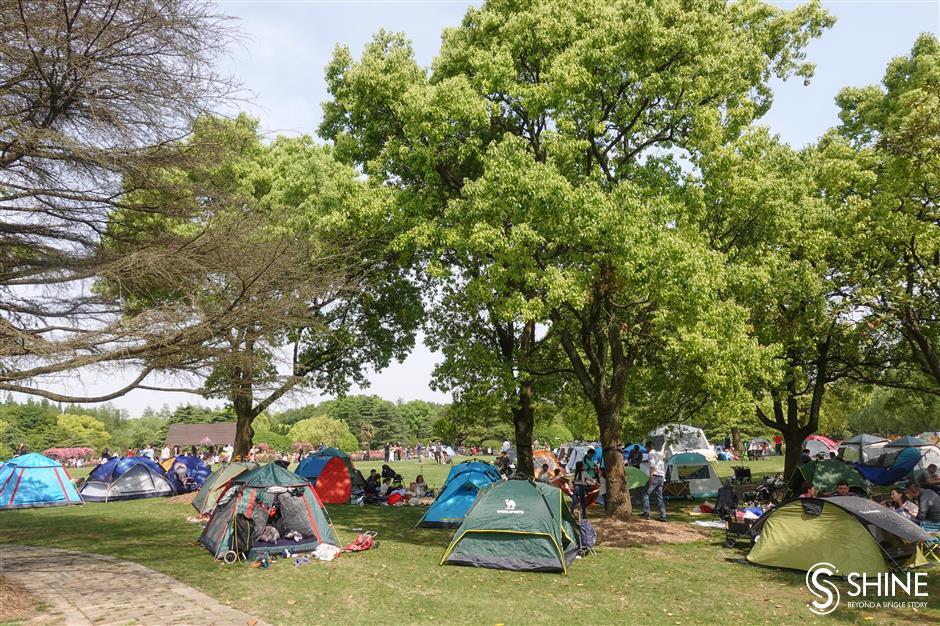 Countryside and night tours gained in popularity during the holiday, with luxury hotels and private tour groups the latest trend for tourists pursuing quality experiences, according to Trip.com.

Tailor-made tours were popular with young people, according to Mafengwo.

Bookings surged 859 percent from the same period in 2019 and more than 40 percent of those were from people aged between 21 and 30, according to the website.

The boom in visits to "red" tourism sites had also boosted cultural and tourism consumption and nearby accommodation, said Cheng Chaogong, a tourism researcher. 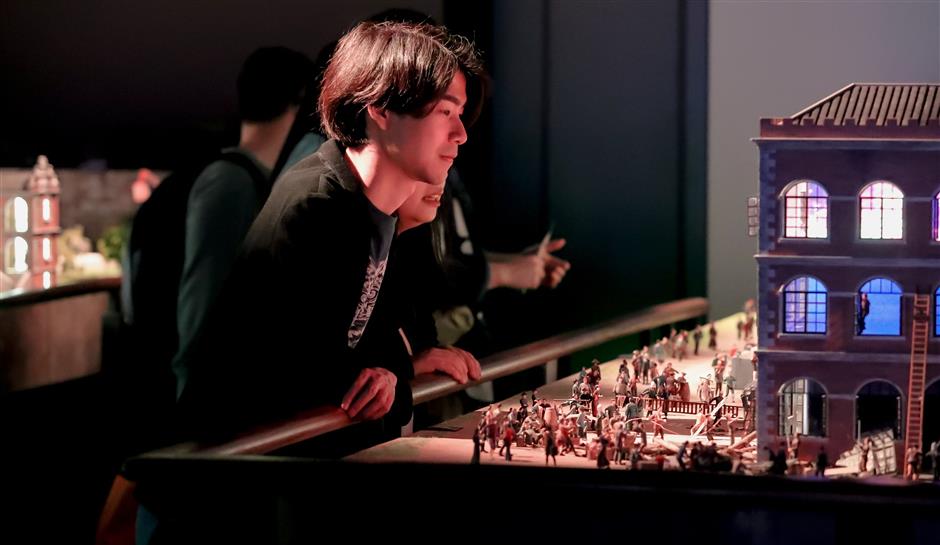 A visitor is captivated by one of the exhibits on display at the Yuyuan Garden scenic area. 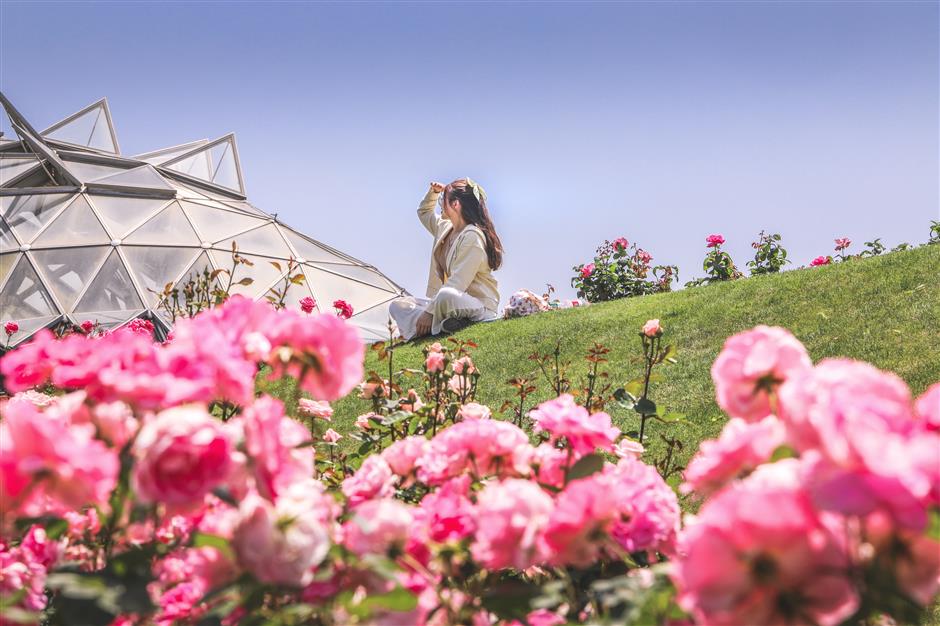 A visitor enjoys the holiday sunshine at Chenshan Botanical Garden.