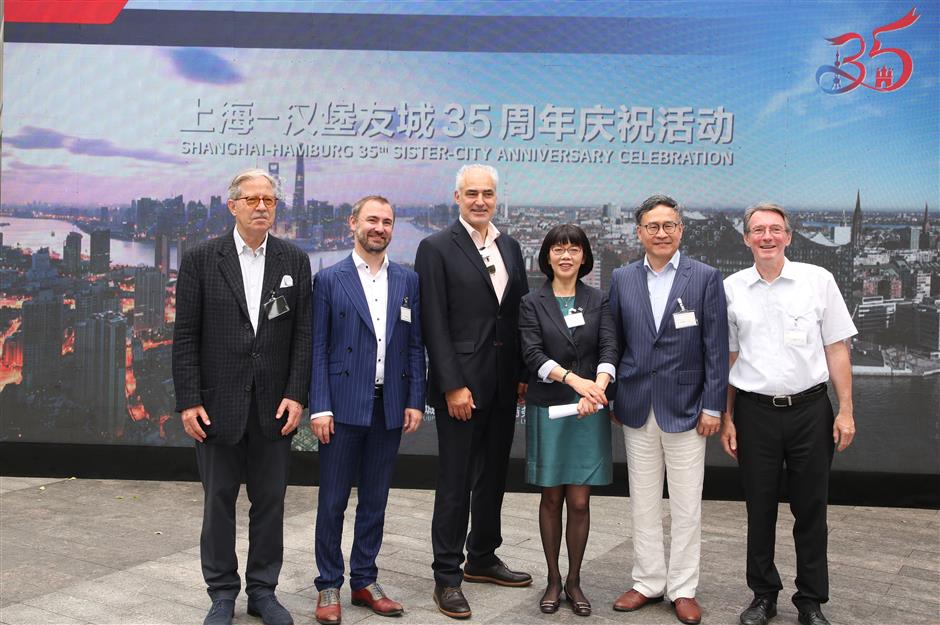 Representatives of Shanghai and Hamburg at the anniversary celebration

Shanghai and Hamburg celebrated a 35-year sister-city relationship on Friday in Huangpu District.

The celebration at the Rose Garden in front of Hamburg House at the Shanghai Expo Urban Best Practice Area was hosted by the Foreign Affairs Office of Shanghai, Shanghai Administration of Culture and Tourism and Hamburg Liaison Office China.

Over the past 35 years the two cities have enjoyed cooperation in areas such as economics, ports, education, culture, tourism, science and technology, health care, environmental protection, finance and legislation.

"Hamburg has become one of Shanghai's closest partners," said Liu Guangyong, vice director of the foreign affairs office, specifically mentioning the collaboration between the two cities during the COVID-19 pandemic.

Port of Shanghai and Port of Hamburg became sister ports in 2004.

The Hamburg Port Anniversary is celebrated on the first weekend of May every year. Port of Hamburg has a history of 832 years.

"In May this year, we participated with enthusiasm in the online celebration of the Hamburg Port Anniversary and conducted a real-time city view webcam with Hamburg," said Jin Lei, deputy director of Shanghai's culture and tourism administration.

Earlier this year, the administration promoted the charm of Shanghai to the residents of Hamburg in promotional videos on the Hamburg Port Anniversary online platform.

Hamburg House was built by Shanghai and Hamburg during the World Expo 2010 Shanghai as a symbol of friendship between the two sister cities.

In Hamburg, there is also a Chinese Teahouse imitating the Huxinting Teahouse in Yuyuan Garden, which has become a tourist attraction in the German city.

The two sister cities are to hold a series of 35th anniversary celebrations.