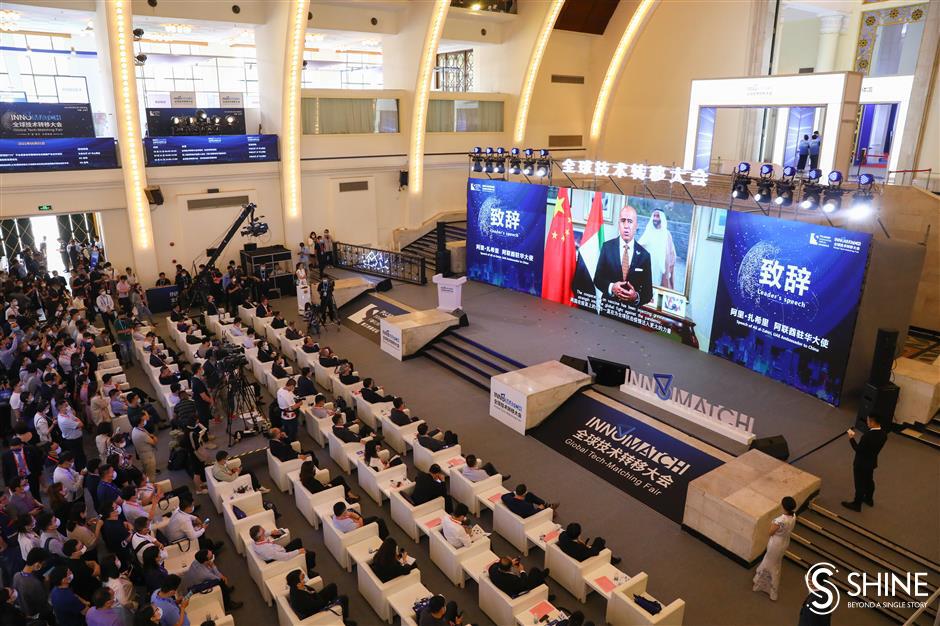 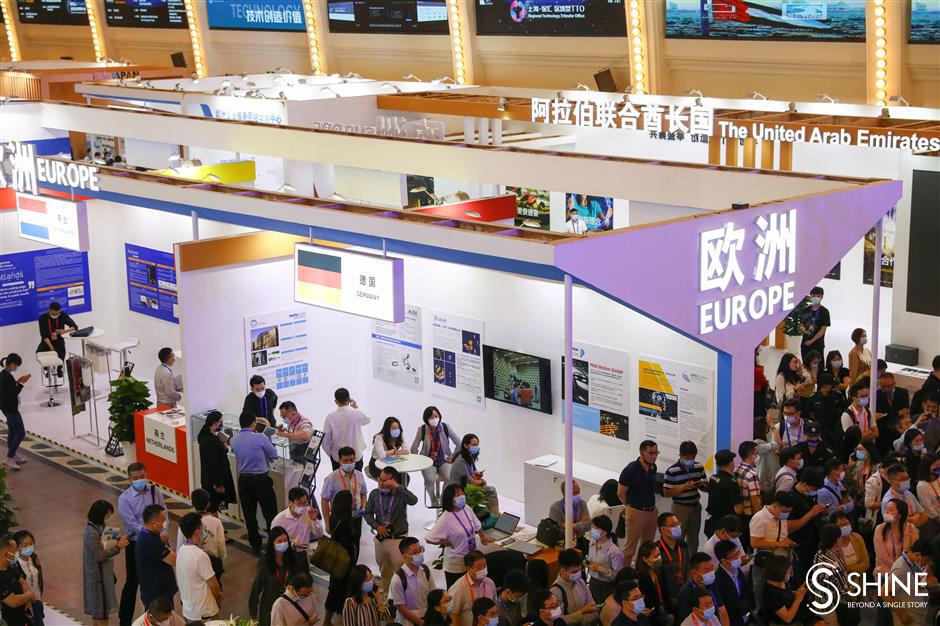 The expo has attracted a global crowd.

The annual Pujiang Innovation Forum has opened with the overture to a global conference on technology transfer. The three-day Inno-Match Expo, also known as the Global Tech-Matching Fair, opened on Monday at the Shanghai Exhibition Center.

In its second year, the fair features an exhibition, product debuts and nearly 20 meetings on frontier research in fields such as semiconductors and carbon neutrality, as well as hot topics including fintech and Yangtze River Delta regional cooperation.

It offers a platform for regions and countries, startups and business tycoons, and universities and industrial parks to demonstrate their advantages and development potential.

More than 10,000 technological innovation needs are presented, and more than 500 findings are expected to become products for the market.

"China's technology trade has been working brilliantly over the past five years, and the country is becoming a major global technology transfer hub," said Huang Shengbiao, deputy chief of the Ministry of Science and Technology's Department of Research Commercialization and Regional Innovation.

As of April 23, China's STAR Market, launched in June 2019, was home to 265 listed companies with a combined market value of nearly 3.5 trillion yuan.

In April, 1,491 achievements had been listed on the Shanghai Technology Exchange, opened last October, with transaction volume of 847 million yuan.

"I hope the fair can strengthen links among innovators, facilitate construction of China's technology factor market and give full plays to professional tech-transfer managers," he said. A robot dog featured at the fair 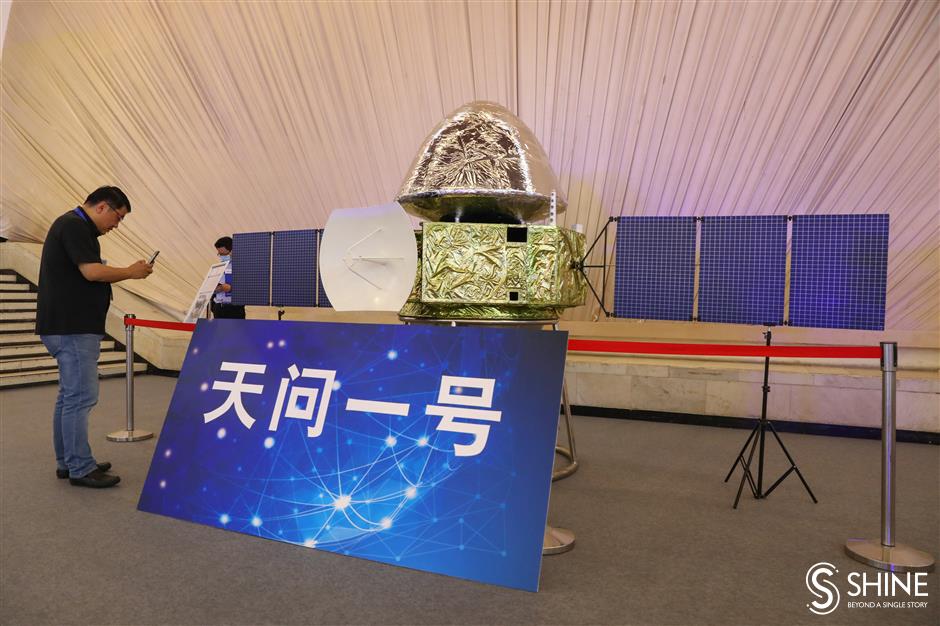 A model of Tianwen-1

China Baowu Steel Group, one of the world's top steel producers, is looking for experts in fields such as nickel-based alloy welding materials, graphene carbon nanotube and mechanical, and mechanical and electrical systems.

"We released 15 technological demands at last year's fair, and 12 of them have been solved. So this year, we came with 25 demands," said Hu Yi, general manager of Baowu's Wesocool incubator in Baoshan District. "We encourage direct contact between projects and technological experts, which accelerates iterations and upgrading of technologies."

China is the second largest market for AstraZeneca after the United States. In 2019, in partnership with Wuxi government, it opened an international life-science innovation campus, providing one-stop services for innovative companies to enter and grow in China. It is now home to more than 40 companies, with seven international strategic partnerships formed.

"This year, we will expand such government/business projects to other Chinese cities, such as Shanghai, where we will focus on incubating artificial intelligence-based disease management," said Chen Kai, director of the innovation campus. "In October, we plan to upgrade the company's research and development center in Shanghai, and provide incubation and acceleration services related to drug research and development, from pre-clinical studies to phase-three clinical trials." 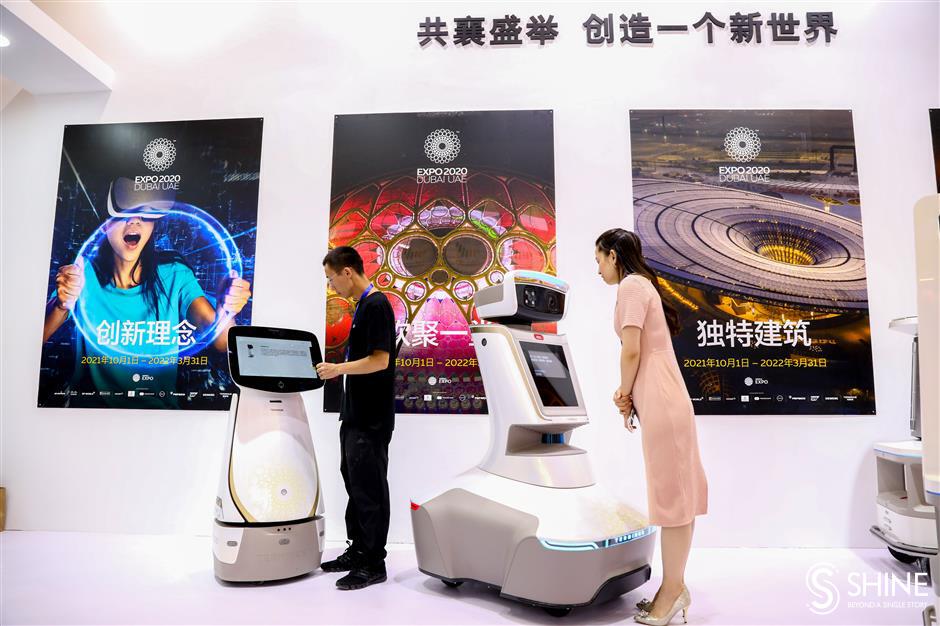 Domestically developed robots to be used at the World Expo in Dubai in October are on display. 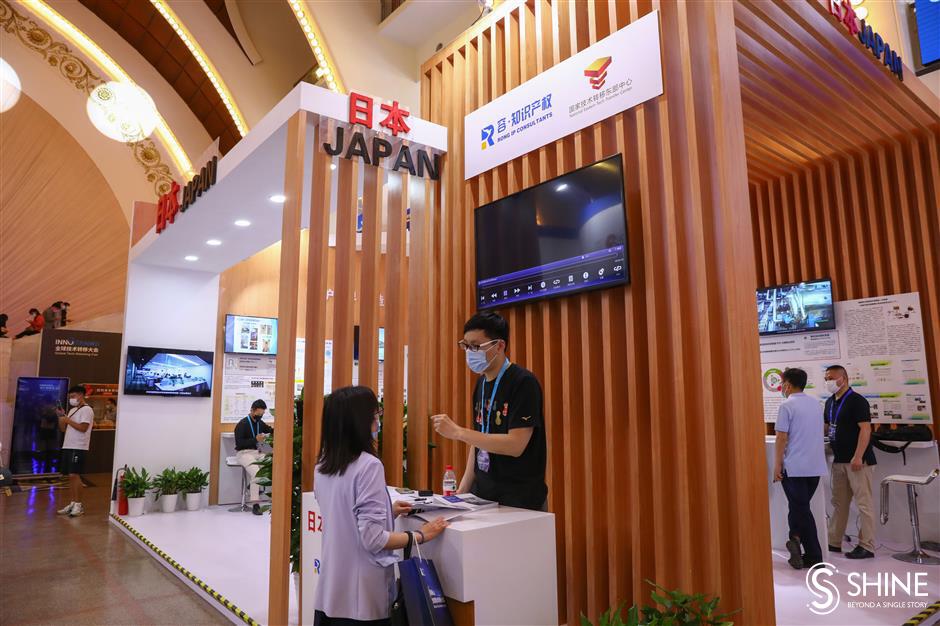 It is divided into six zones: Tech-World for global innovators, Tech-High for high technologies, Tech-Need for business tycoons, Tech-New for technology startups, Inno-Source for the latest findings and Inno-Service for service providers.

Pavilions are set up by countries and regions to showcase their developments and seek cooperation.

The United Arab Emirates, this year's Country of Honor, is presenting a preview of the World Expo in Dubai set to open on October 1, coinciding with China's National Day.

Beijing-based Terminus, the only Chinese partner at the Dubai Expo, will send 152 robots to the Expo. In addition to specially designed mascot robots, four other types of robots will work as butlers, deliverymen, mobile advertising screens and patrolling security guards at the Expo, and are on display at the fair.

The decision to make the UAE this year's Country of Honor "fully reflects the in-depth cooperation and broad prospects for the two countries in the field of technological innovation," said Ni Jian, Chinese ambassador to the UAE.

According to Ni, the UAE sets an example for the innovative practices of emerging economies around the world.

"It has embarked on a path of innovation that suits its own national conditions," he said.

"Our key aim is to transition from an oil-dependent economy, and transform UAE's industrial base into an innovation powerhouse," he said.

"The two countries are sharing many complementary strengths and resources, and we are continually broadening the scope of our mutual partnerships and areas of innovation," Dhaheri said.

Years of China-UAE cooperation has produced great results, including joint efforts to carry out the world's first phase III clinical trial of a COVID-19 vaccine. According to Ni in a video conference held in March, the two countries achieved broad consensus to further cooperate in AI, vaccine R&D and achievement transformation. 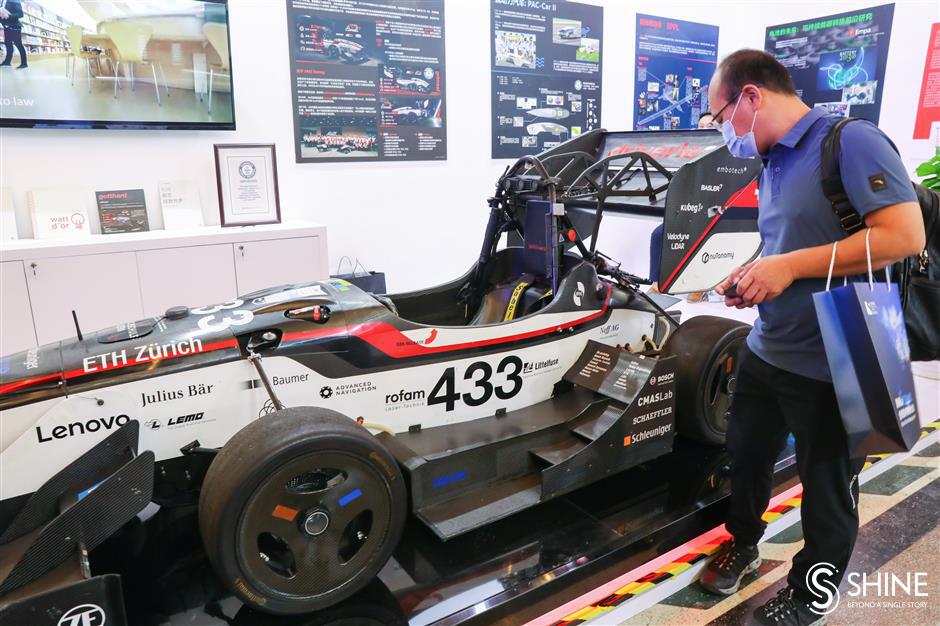 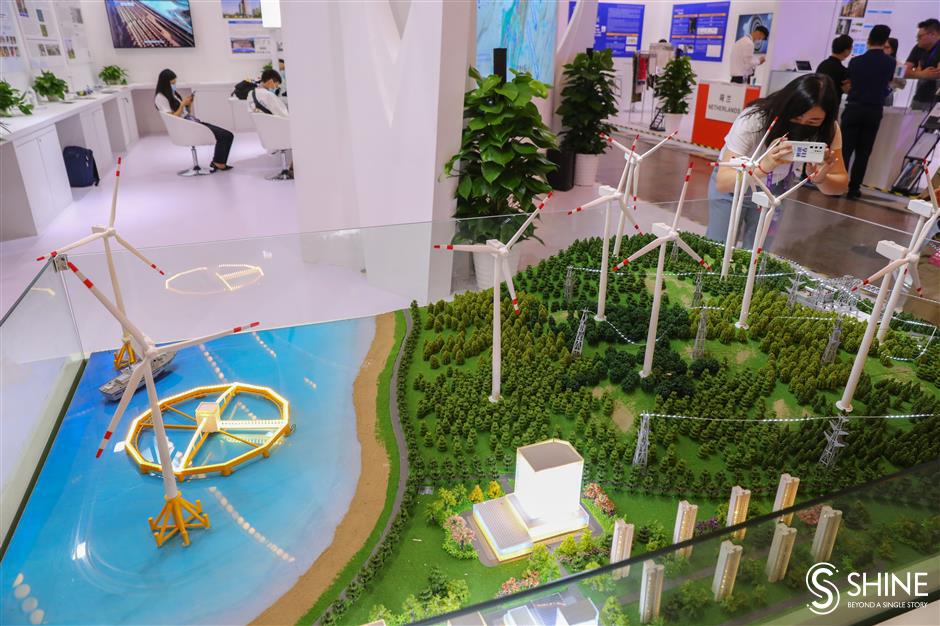 The Chongqing Pavilion demonstrates a model of wind farms. 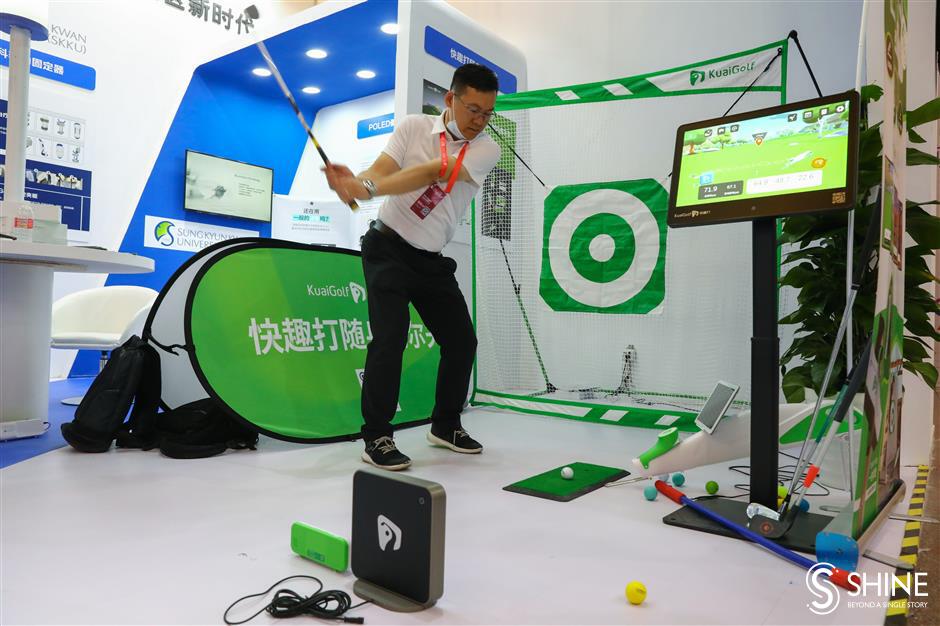 A golf game developed by China, Japan and South Korea

The Japanese Pavilion is demonstrating the country's advantageous industries in health care and new materials.

Displays include a photocatalyst that can remove formaldehyde and kill bacteria. The product is widely used in new buildings and gathering places for the elderly in Japan, such as nursing homes. It is now seeking cooperation with Chinese developers.

Also, Chinese companies are seeking investment in GT863, a new-generation, small-molecule chemical drug designed by Japanese researchers to treat Alzheimer's disease. Animal tests have proven its safety, and clinical trials are set to be carried out.

"The fair serves as a platform for Japanese companies to seek partnerships in China, in areas such as attracting capital, building joint-venture companies and achieving technology transfer," said Zhao Jiaru of Rong IP Consultants.

The Swiss Pavilion is demonstrating its research on solar-powered aircraft, hydrogen-powered vehicles and new-generation lithium batteries.

Notably, it is featuring "gotthard," a driverless electricity-powered race car loaded with LiDAR (light detection and ranging) and optical velocity sensors with autonomous capabilities, cameras and a GPS system. It weighs only 181 kilograms, but its power-to-weight ratio is 0.86 kW/kg, a value that exceeds supercars. And its 0-100km/h acceleration is just 1.9 seconds, faster than F1 race cars.

According to Switzerland's State Secretariat for Education, Research and Innovation, the country is an innovation powerhouse, but is little known to many Chinese. It hopes to find Chinese partners through the forum and land innovative products in China.

"It provides a mini mobile golf course for people to enjoy the game of golf at home, and it only costs about 2,000 yuan (US$313)," said Song Xiaofeng, founder of KuaiGolf. "The core radar technology was developed in China, while Japan focused on software development and South Korea developed different scenarios."

According to Song, the product is selling well in China and South Korea. It plans to promote the game in the US in the near future.

Of the Chinese pavilions, Chongqing, this year's City of Honor, is displaying models of ground-based and offshore wind farms built by HZ Windpower, a subsidiary of the state-owned China Shipbuilding Industry Corporation.

The Chongqing-based company now runs more than 200 wind farms across the world, which can generate more than 10 million kilowatts of electricity annually. Its offshore wind turbine has a unit capacity of up to 10 megawatts.

"There is no limit on the sea. Therefore, we can build giant wind turbines with bigger unit capacity, and install floating offshore turbines to generate electricity where fixed-foundation turbines are not feasible," said Zhang Hao, project manager of HZ Windpower's science and technology department. "Today, our turbines are almost 95 percent domestically developed, and we are integrating big data technology to achieve smart operations. China is well on its way to grow from a major turbine manufacturer to a turbine technology powerhouse." 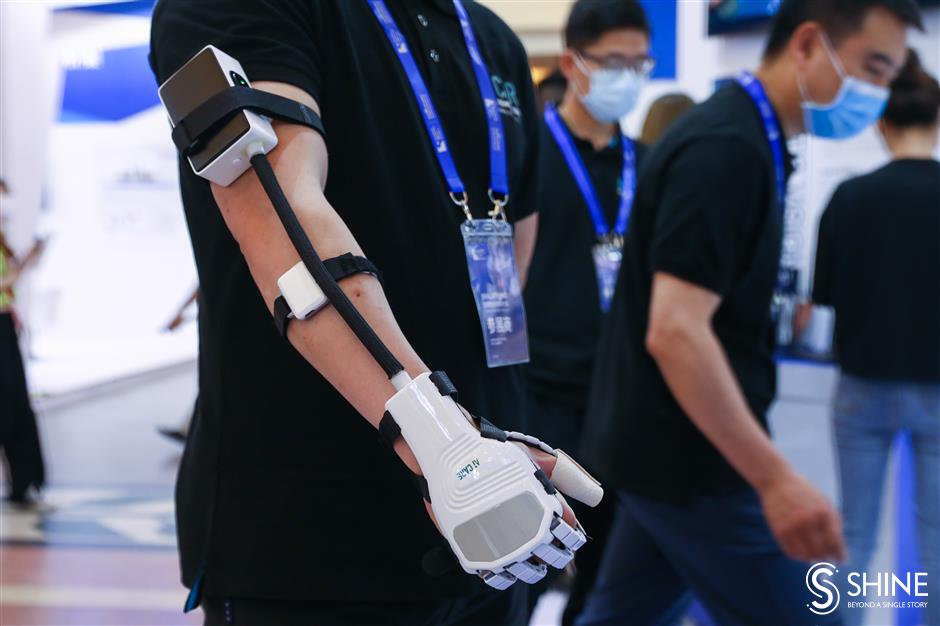 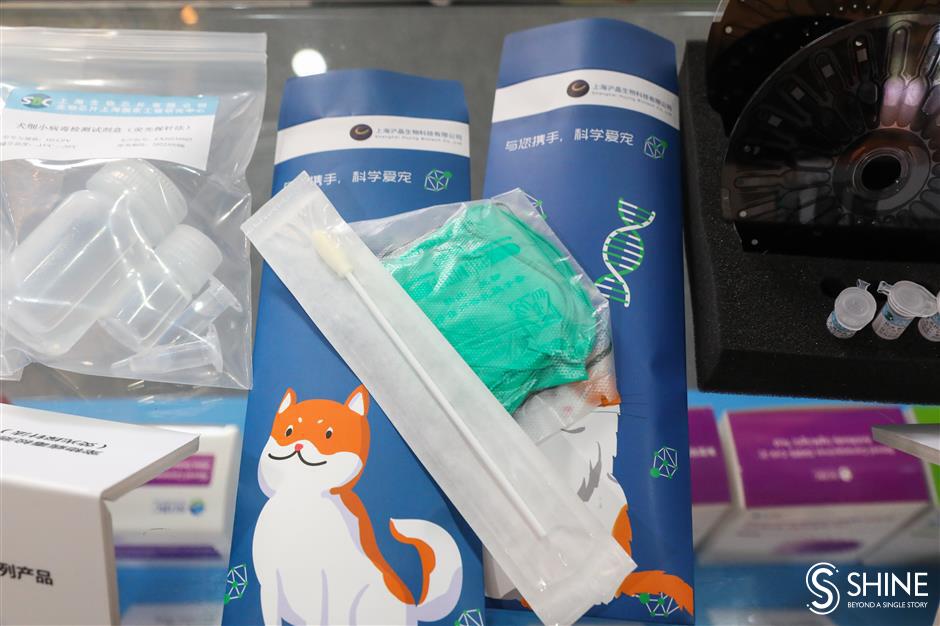 The fair is also showcasing a wide range of domestically developed achievements.

Hefei-based Origin Quantum, backed by the University of Science and Technology of China, is demonstrating a model of a futuristic quantum computer in the shape of round tank.

"Quantum computers can't do simple addition like 1+1, but they can work brilliantly in specialized areas such as accelerating drug development," said Sun Chao of Origin Quantum. "Right now, quantum computing is still in the infancy of development. We only have a prototype."

The company's quantum computer uses a self-developed chip, but its refrigeration system is imported.

"Quantum computers require a low-temperature environment for chips to operate. The multi-stage coolers create an environment of minus 273.14 degrees Celsius," Sun said.

"In the current development of quantum computers, China is trying to keep pace with its rivals in software development, but it lags three to five years behind in hardware development. The US leads the world," he added.

The wearable robotic glove can recognize intentions of users and help them gently bend and straighten fingers, providing necessary stretches and repetitive exercises in order to restore lost hand functions.

"We provide algorithms and hardware development to turn the hospital's discoveries into a product. The first robotic arm was made last year. Currently, the product is still being tested," said Wang Yang, Shanghai AI Care Medical Technology's R&D director.

Through the fair, he hopes to garner media exposure and partnerships, such as fundraising.

"As a technology startup, we are located in the China-Israel Innovation Hub in Putuo District. We hope to promote homegrown products to the world," he said.

Shanghai Biochip in the city's Zhangjiang pharma innovation hub holds one of the country's largest national engineering centers for biochips. It is demonstrating a wide range of self-developed detection kits for COVID-19, HPV, Hepatitis B and other common viruses.

The company is focusing on developing genetic testing for pets, so owners can better understand their pets' health risks and learn how to raise them in a more scientific way.