Thirteen early members of the Communist Party of China gathered in an 18-square-meter house in Shanghai for the First National Congress of the Party a century ago, triggering overwhelming changes to China and Chinese people.

A memorial to the historic congress opened on Thursday to mark the centennial of the Party's founding this year. 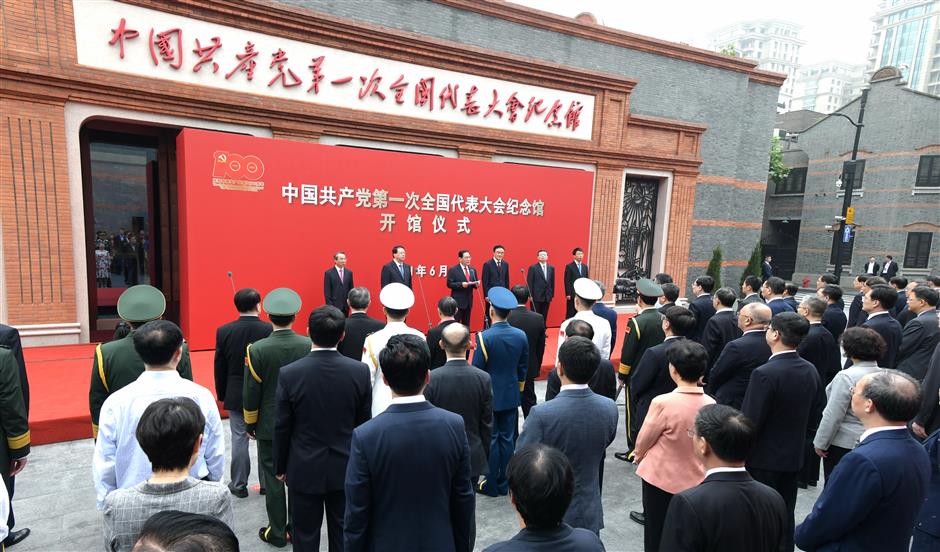 Shanghai Party Secretary Li Qiang announces the opening of the Memorial of the First National Congress of the Communist Party of China on Thursday.

The site in Huangpu District where the Party was founded in July 1921 includes the former site of the congress on Xingye Road and a new exhibition hall opposite Huangpi Road S.

"This place witnessed the founding of the Party and marked the great beginning of China's revolution," Li said. "It also carries the great dream of the CPC and inherits the great spirit of the Party members." 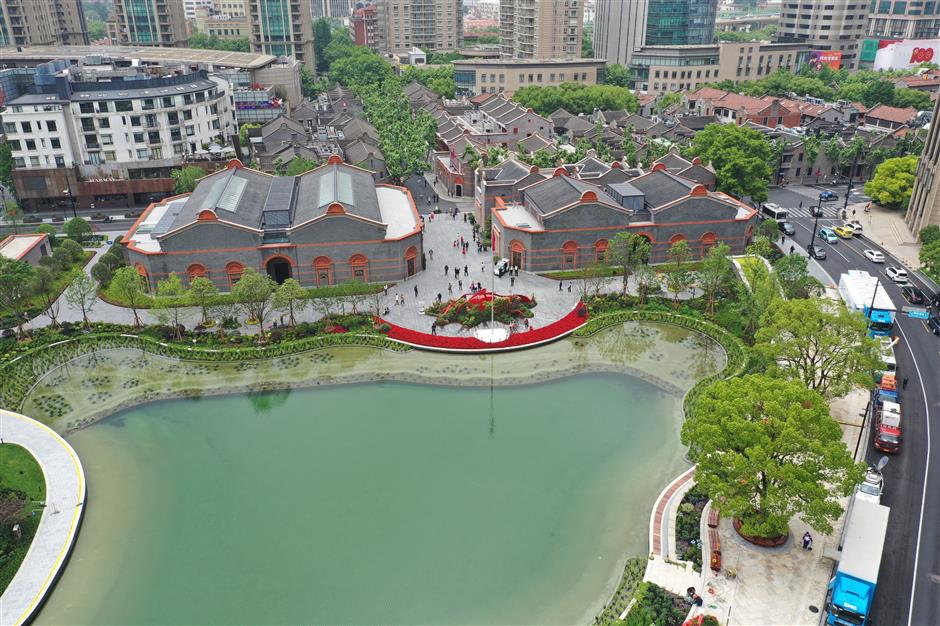 The new exhibition hall is opposite the site of the congress.

Shanghai is the birthplace of the CPC and the origin of the guiding hearts of the Party members, which is the eternal glory of the city, Li added.

President Xi Jinping and six other members of the Politburo Standing Committee visited the site in 2017, a week after the closing of the 19th National People's Congress.

The site has received an increasing number of visitors every year, making it essential to expand the structure. The former site was closed in November last year to give way to the expansion project.

The site has been renovated using traditional techniques and modern technologies to preserve the century-old shikumen (stone-gate) buildings while reinforcing the structure. 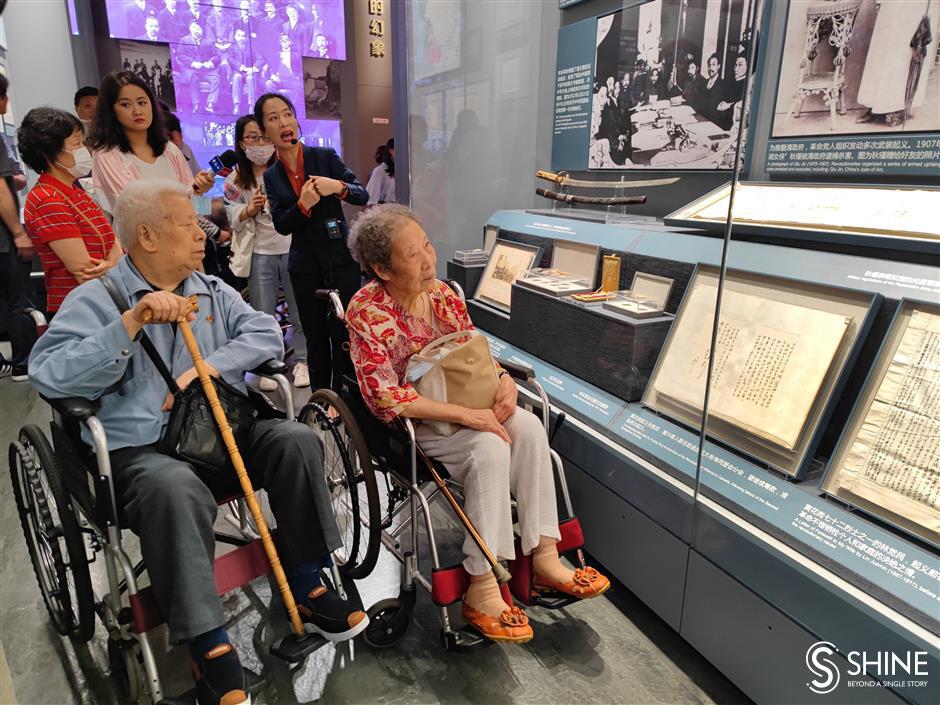 Li Shifeng (right), the first generation of receptionists at the former site of the congress, visits the memorial with other former colleagues.

The new memorial features Shanghai's unique architectural structure in accord with the buildings in the surrounding Xintiandi area. The main exhibition space covers about 3,700 square meters, quadrupling the previous exhibition space.

"The design of the new exhibition hall aims to restore the historical look of the whole block and nearby streets," said Xia Bing, the senior architect in charge of the project. "The project is a well-blending of architecture and urban scenery and ambiance," Xia added.

A major exhibition about the origins of the Party was launched on Thursday as the new memorial's first exhibition after its grand opening. The "Epoch-making Beginnings: Founding of the Communist Party of China" exhibition documents the original aspiration and mission of the Party in seven sections dating from 1840.

The exhibition features 1,168 exhibits about the birth of the Party and the revolutionary practices in Shanghai, including 612 cultural relics along with photos, videos, oil paintings, sculptures and multimedia works. 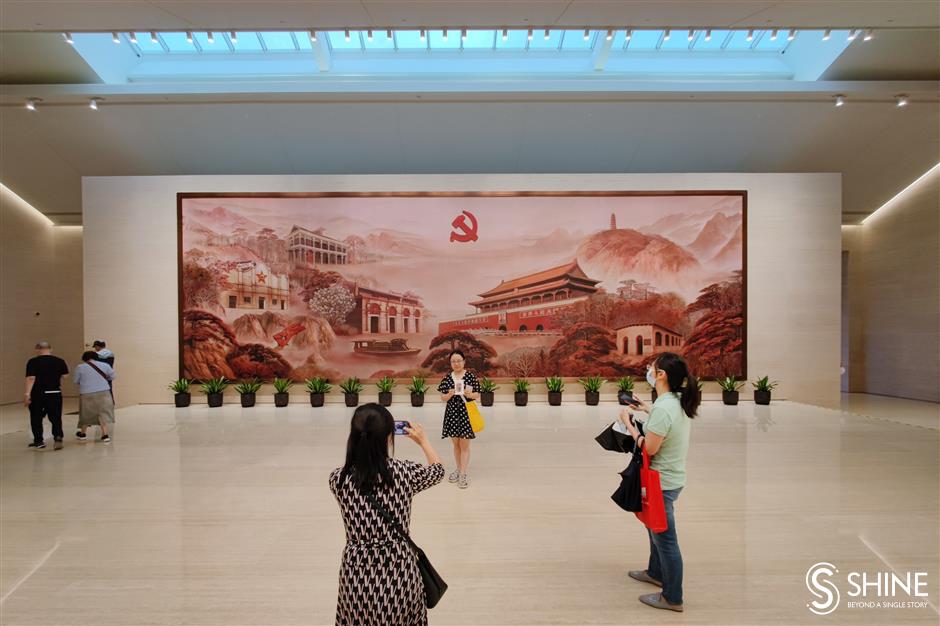 Visitors take photographs in front of a huge porcelain painting.

The memorial has collected a total of over 120,000 exhibits, mainly donations from descendants of pioneers and collectors.

Wang Yi, a researcher at the Shanghai History Museum, donated over 100 items he collected over the years. They included a full Chinese version of "The Communist Manifesto" published in 1942.

"I'd like to make more people see the precious cultural relics," said Wang, 63.

Liu Shaling, another donor, presented the diary of his father, a former New Fourth Army officer, about the Party's mobilization meeting as well as policies and regulations for the liberation of Shanghai in May 1949.

"I feel like fulfilling the wishes of my father by donating his diary to the memorial," said Liu, 72, who worked at Shanghai Museum before his retirement. 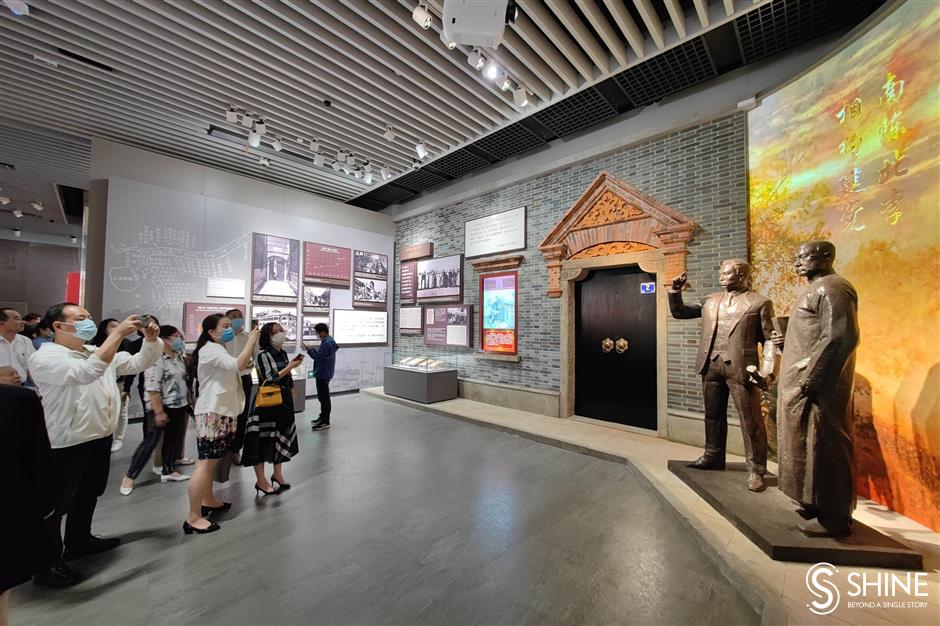 Visitors take photographs on a multimedia exhibition at the memorial.

A huge porcelain painting is displayed at the beginning of the exhibition. It features historic Party landmarks, such as the site of the congress, Jinggangshan in east Jiangxi Province, Yan'an in northwest Shaanxi along with the Yangtze River, Yellow River and the Great Wall.

Key exhibits include 72 editions of the "The Communist Manifesto." The initial and second full Chinese editions translated by linguist and educator Chen Wangdao and published in August and September 1920 are on display.

Hu Xiaoyun, chief designer of the exhibition, said artistic creations and the latest technologies were involved in putting it together.

A bronze sculpture of the 13 delegates to the first congress, for instance, involved superior carving and illumination skills to imply the different fates of the delegates.

Nanotechnology was used for the painting, while a historic video about the founding ceremony of the People's Republic of China has been restored into 4K high-definition, Hu said. 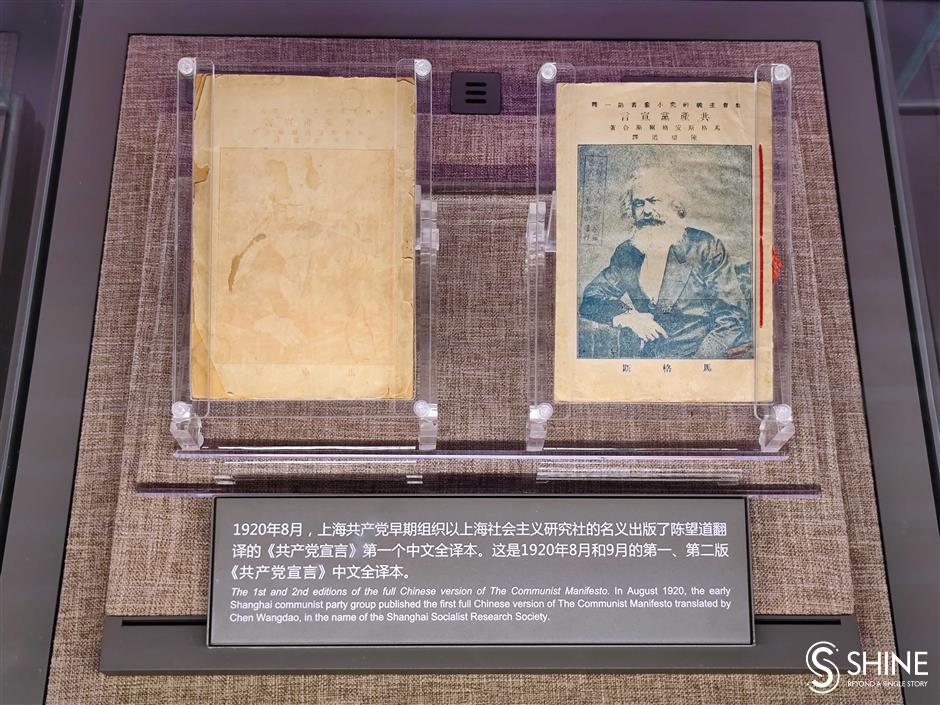 The first and second edition of the Chinese version of "The Communist Manifesto."

A 3D movie restores the historic scene of the congress. In the movie, the delegates make speeches and discuss the guiding principles and work plan of the Party.

A large table model gives a view of downtown Shanghai in the 1930s. A light and sound exhibition highlights key Party and revolutionary sites.

Other treasured cultural relics include a Smith Corona typewriter used by Li Dazhao, a Party founder and pioneer. Li often needed to communicate with Comintern officials and representatives of the Soviet Union in China. He borrowed the typewriter from Sun Yat-sen's secretary to type many secret documents.

Chinese revolutionary martyr Li Bai sent out the last message before sacrificing his life at the age of 39 in Shanghai on May 7, 1949, 20 days before the liberation of the city. His toolkit, including about 40 tools in a wooden box, used to repair a secret radio station is on display. 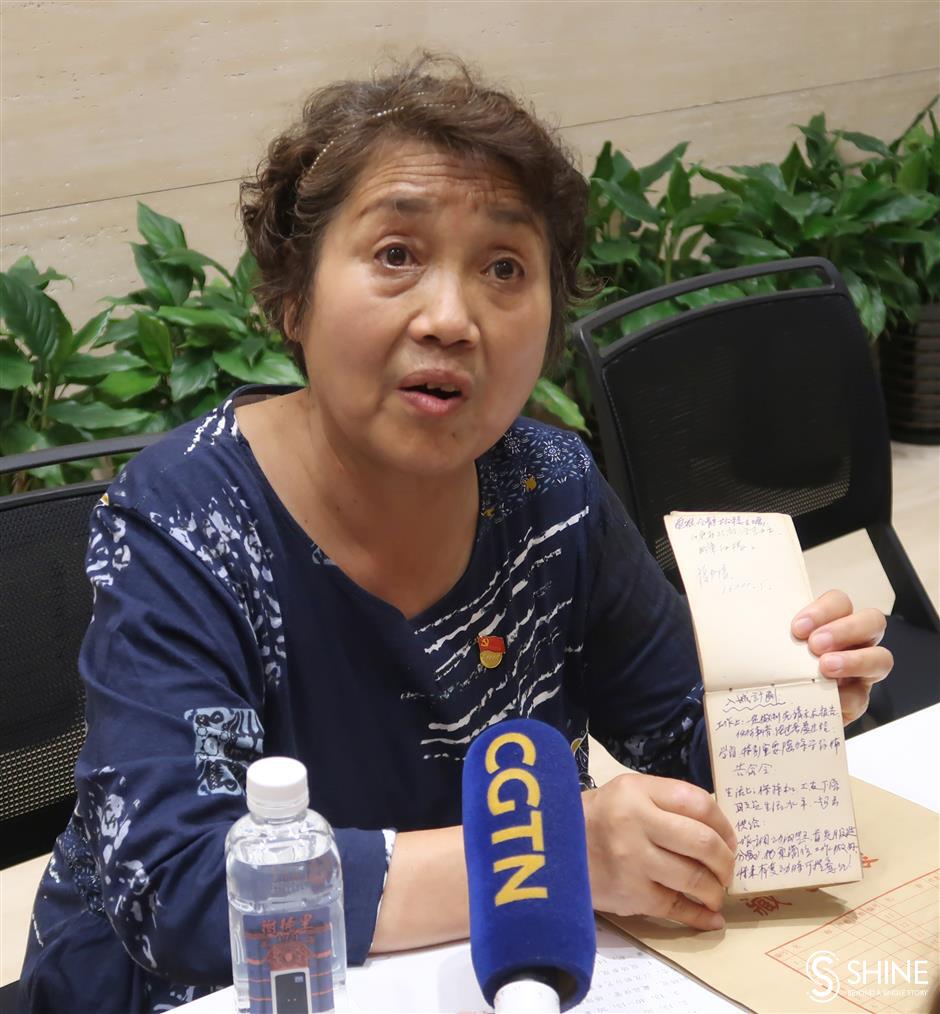 Liu Shaling donates the diary of his father, a former New Fourth Army officer, to the memorial.

The memorial received its first batch of visitors on Thursday afternoon, including some former staff working at the site.

Li Shifeng, 87, was among the first generation of receptionists working at the historic congress site. She received national leaders such as Chen Yi, Shanghai's first mayor, and Deng Yingchao, wife of China's first Premier Zhou Enlai, as well as foreign guests, including then DPRK leader Kim Jong Il.

She was invited to return to the site she had worked for over three decades ago to view the exhibition.

"I feel thrilled to return to the workplace and witness the glorious centennial of the CPC," Li said. She recalled the poor condition of the site when it initially opened in the 1950s, a sharp contrast to the scene today.

The memorial is open between 9am and 5pm between Tuesday and Sunday. Reservations are required and daily visitors are restricted to 10,000.

The former site of the congress can receive up to 2,000 people a day with three visiting periods available.

The reservation can be made through Wechat app (Memorial of First National Congress of the CPC), by calling (53832171) or on site.

Shanghai has preserved 612 historical sites related to revolutionary campaigns between 1919 and 1949, including 497 former sites of key Party and government bodies as well as 115 memorial venues. 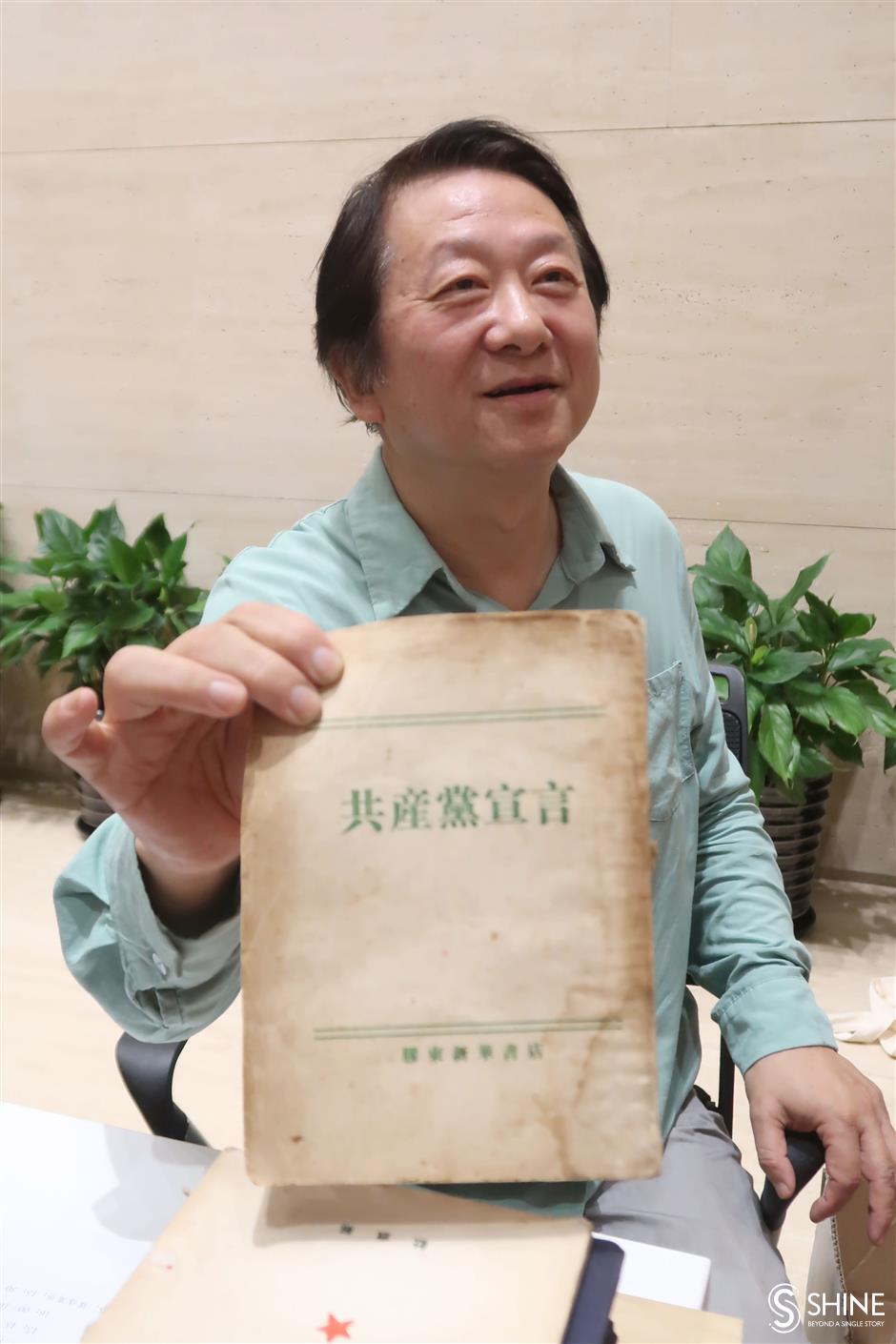 Wang Yi donates a Chinese edition of "The Communist Manifesto" published in 1942.