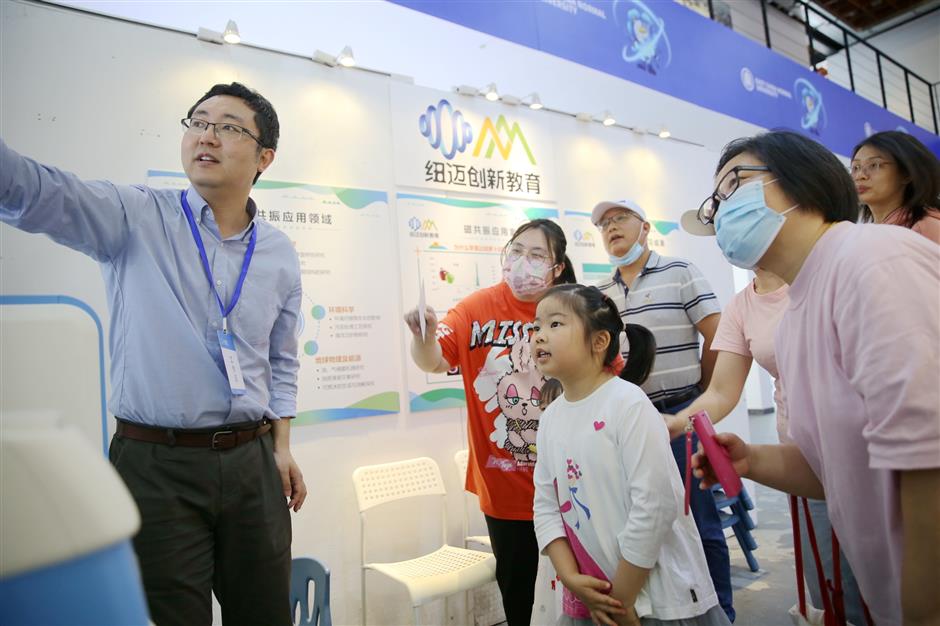 East China Normal University opened its campus to local residents for them to try AI-empowered education.

Teaching music together with art, collecting the health data of children during physical exercises, assessing students' cognitive ability via games - these are some of the scenarios local families can experience about how artificial intelligence can empower education during an activity at East China Normal University.

More than 1,000 families have attended the "Intelligent Education Week" activity at the university, which opened its campus to the public to show its latest research achievements and their application scenarios.

The activity was a prelude of an educational forum to be held by the university in July during the World Artificial Intelligent Conference. 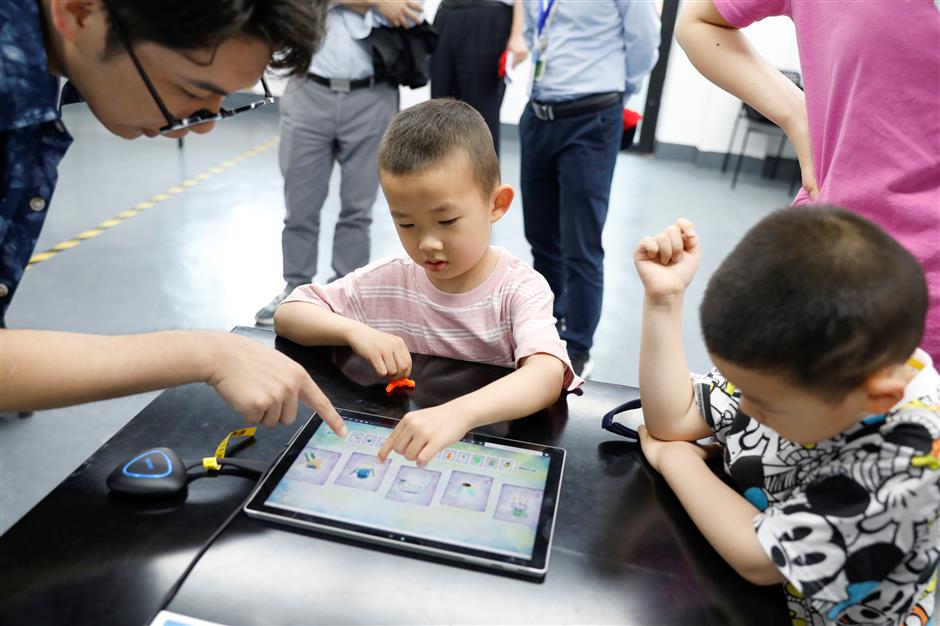 Children learn music via art in an application developed by the university.

In one room at the university's School of Design, a tablet enabled children to learn musical sounds via paintings and create their own music by arranging the paintings.

The music-painting system was developed by a team from the university, whose research involves various disciplines including brain science, neuroscience and cognitive science.

"The system combines music and art with emotion as a bond to promote children's aesthetic perception and creation," said Chen Jinming, an associate professor at the school of design. "The teaching process of the music-painting system is not training a single skill, but to help children develop their structure of aesthetic psychology via multi-sensory approaches."

More than 20 such online applications and offline teaching tools have been developed, and some are being trialed in local kindergartens.

In another scenario, eight robots were painting cartoons, elaborate-style drawings and Picasso's well-known works. Based on the drawings, children began to make secondary creations by coloring them. It showed how people and machines can work together in artistic creation and education.

Also, a series of textbooks published by the university's publishing house for robot, artificial intelligence and STEAM (science, technology, engineering, arts and mathematics) education were on display. 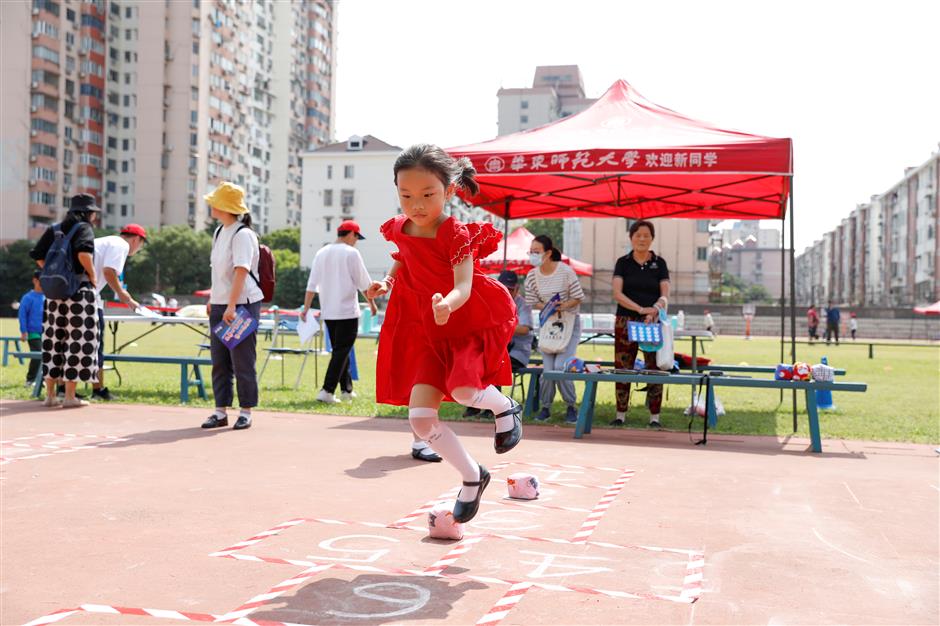 A student in the playground of the university.

On the playground, the university showed its self-developed sport courses for children. As children wore heart rate monitors and sports bracelets when doing physical exercises, their heart rate can be seen on a large screen so that teachers can watch over the change of the rates to assess the real-time condition and physique of children and adjust exercise intensity accordingly.

Jumping on a building-shape map, playing with rubber bands, sandbag throwing and other traditional games popular in China were also staged on the playground.

"These games are organized not only to pass on traditional Chinese sport culture, but also to inspire students' interests in sports," said Wang Xiaozan, a professor at the university's school of sport and health. "We've found in our research that these games have irreplaceable value for young kids to develop basic sport skills and promote health condition."

She said researchers from the university have developed several mini programs online for students to finish homework assigned by physical education teachers, and teachers can easily get to know children's performance via the mini applications.

"The human-machine interaction technology can help promote students' interests in taking part in sports after school and provide preferences for policymakers and executives," said Wang.

A girl plays computer games to have her cognitive ability assessed.

The university also showed a set of systems for assessing children's sensory and cognitive abilities, which has been found important in children's learning ability.

Zhang Changxin, deputy director of the university's education department, said they have immersed the assessment approaches into games to evaluate children's abilities in visual and auditory concentration, memory and special movements.

Children tried the games, including one requiring students to find out moving thieves among smiling faces, while researchers explained the results to parents and gave suggestions on children's growth and education.

The university's affiliated maternity and childcare hospital and its education department have joined hands to screen babies' brain development and take intervening measures to improve their growth in aspects including early movement, language, cognition and social adaptation to unlock children's brain development at a super early stage. 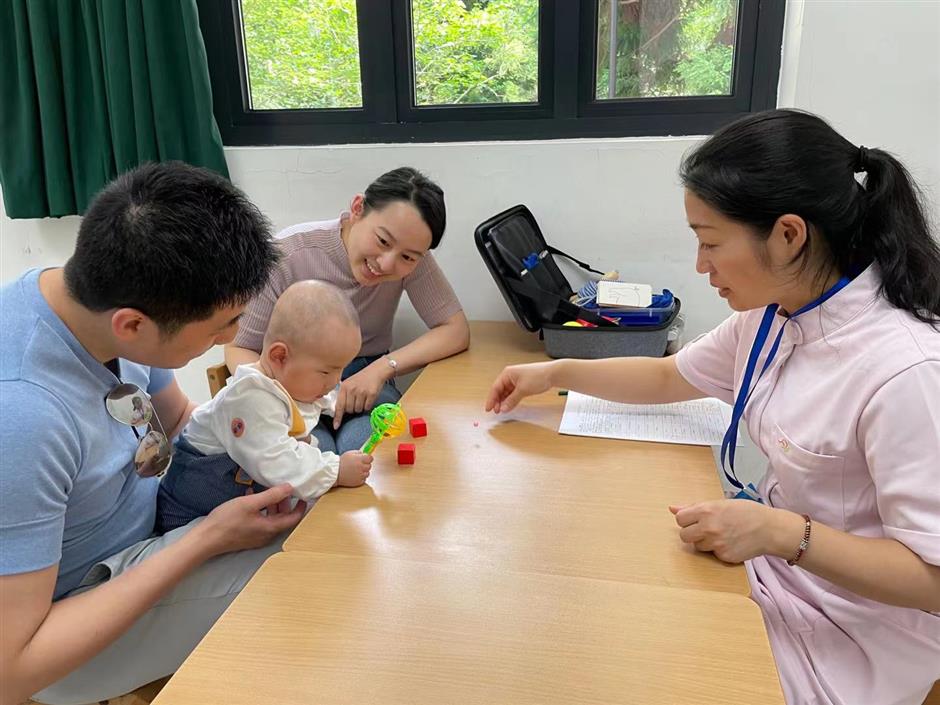 A baby plays a game with an expert from the university to have his brain development evaluated.

"The 'Intelligent Education Week' is not only a demonstration of the achievements we've made, but also an important program for us to promote welfare of  public via education," she said.