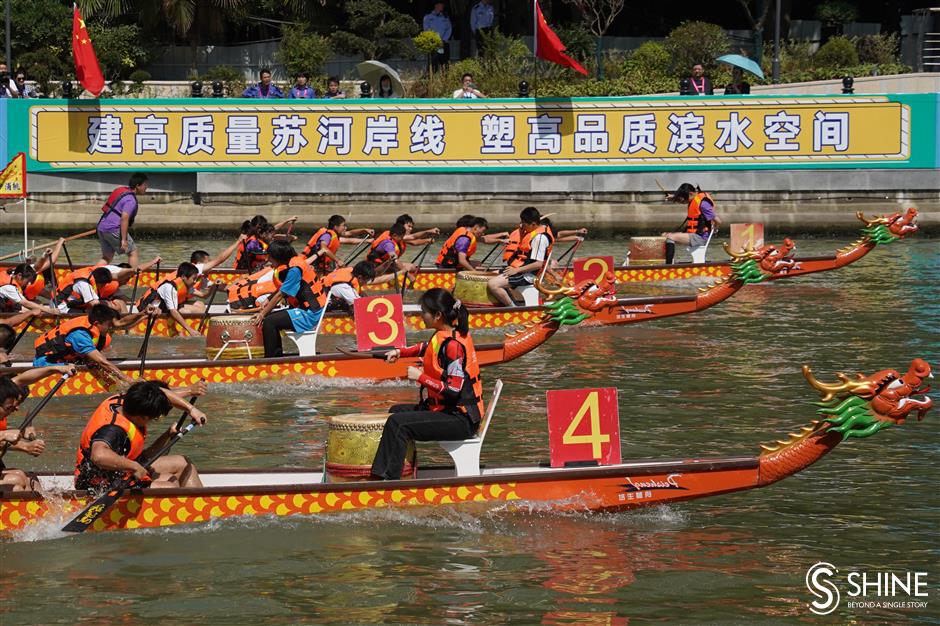 More than 1,000 contestants race on Suzhou Creek on Sunday.

More than 50 dragon boat teams raced against each other on the Suzhou Creek for Shanghai's annual dragon boat competition over the weekend, with the event returning after the COVID-19 outbreak.

The 53 professional and amateur teams raced on 200 and 500-meter sections of the creek on Saturday and Sunday for the China Dragon Boat Open 2021 and 18th Shanghai Suzhou Creek Dragon Boat Invitation Tournament. This is ahead of this year's Dragon Boat Festival which falls on June 14. Six women's teams will take part in the annual competition for the first time.

The contestants competed along a downtown section of the creek in Putuo District, known as the "Crown of the Suzhou Creek".

Strict prevention measures have been taken among the participants and audiences. The over 1,000 contestants must have a nucleic acid test report within seven days or vaccination certificate to take part in the event.

A dragon boat club from Fuzhou in southeast Fujian Province won the championship in the professional game, while the team from Pudong's Sanlin Town won the top prize among the amateurs. 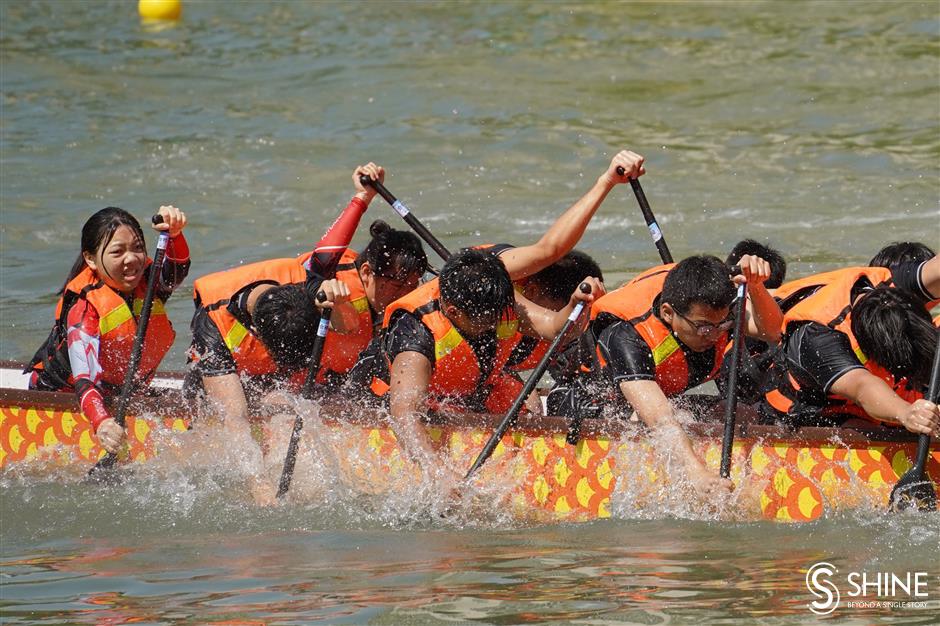 "We feel honored to win for the first time to take part in the famous race," said Liang Xinyu, coach of the Red Bull team. "It is a pleasure for us to race on such a beautiful waterway."

The teams of the education bureau of Putuo, Shanghai Maritime University and Taopu Middle School won the first prizes in different groups.

As the city's only dragon boat race on the major waterway of Shanghai, the tournament has been held for 18 years on the creek, said Wang Hua, deputy director of the Putuo Sports Bureau. The traditional event had to be downsized and moved to Changfeng Park due to the pandemic last year.

Dragon boat races are a traditional Chinese custom to celebrate the Dragon Boat Festival, dating back to the Warring States Period (475-221 BC). 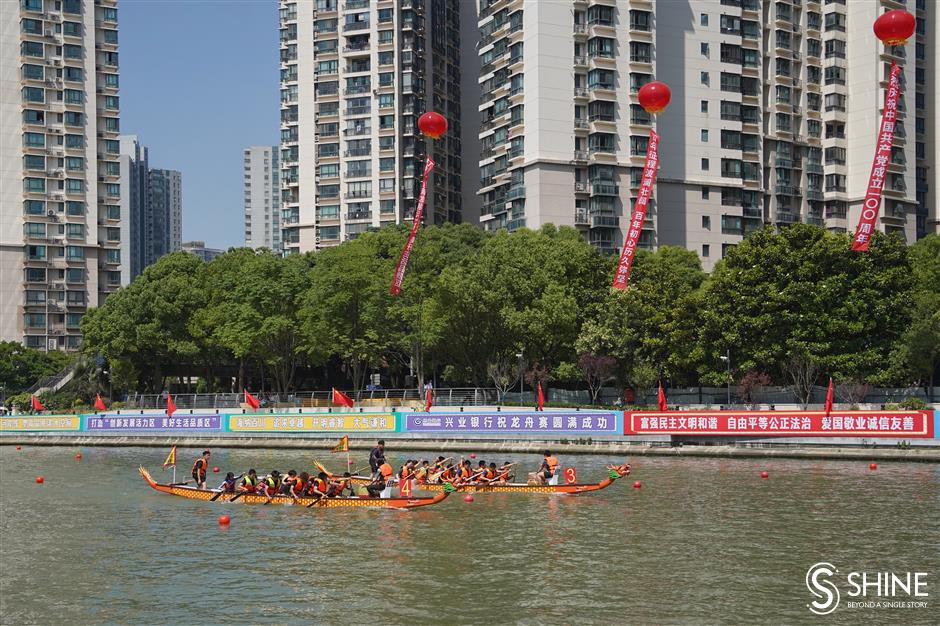 Fifty-three teams in all race on the creek over the weekend.

The Suzhou Creek dragon boat race was launched in 2004 to highlight the results of a clean-up campaign. It has become an important fixture in Putuo, as it showcases the city's commitment to the environment and rapid urban development, according to the Putuo District government.

Putuo has been constantly working to improve the water quality of Suzhou Creek since the 1980s, and intends to develop the area into an ecological zone and ideal place for living, working and innovation. A continuous riverside path, stretching for 21 kilometers in Putuo, the longest downtown section, has opened to the public.

In addition to the race, an exhibition about China's traditional Dragon Boat Festival culture was held in Mengqing Park along the creek. Children were encouraged to experience skiing, rowing and other sports with virtual reality facilities.

Heritage performances and skill shows, such as making zongzi (a traditional glutinous rice stuffed with different fillings) and traditional Chinese medicine, were displayed on the sidelines of the race in the park. 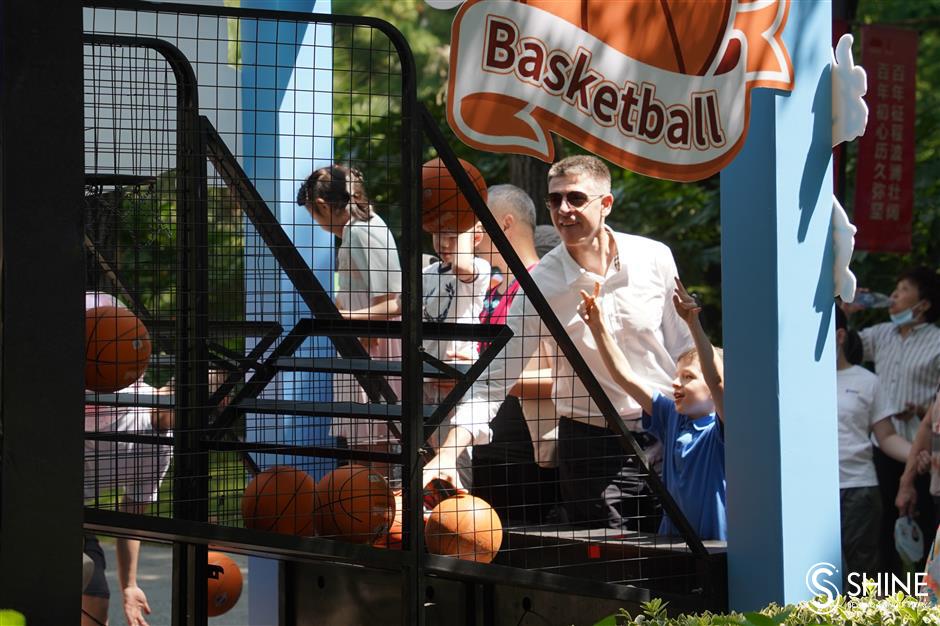 Children are encouraged to take part in various sports on the sidelines of the race. 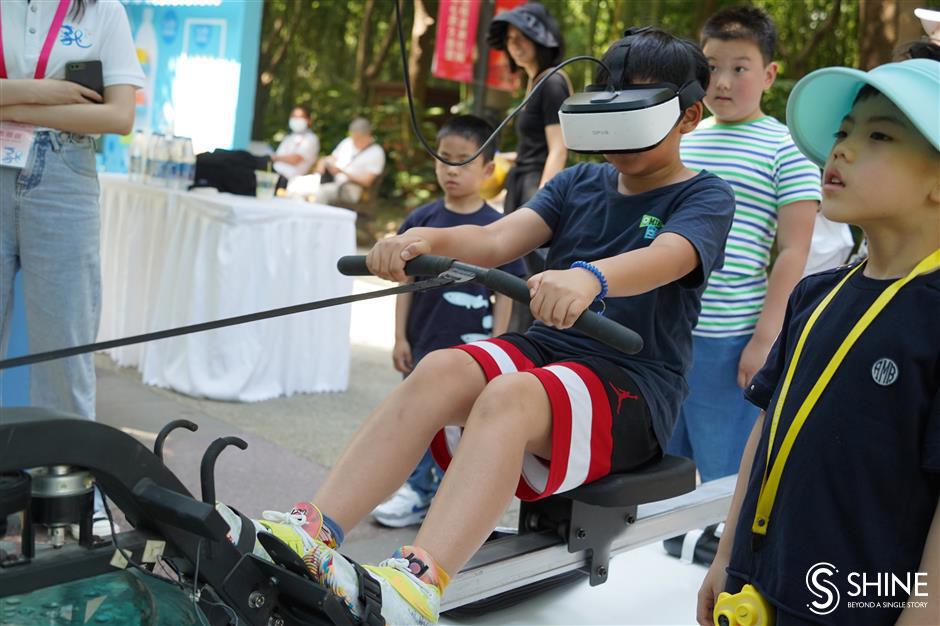 A mix of physical activity and virtual reality is popular.