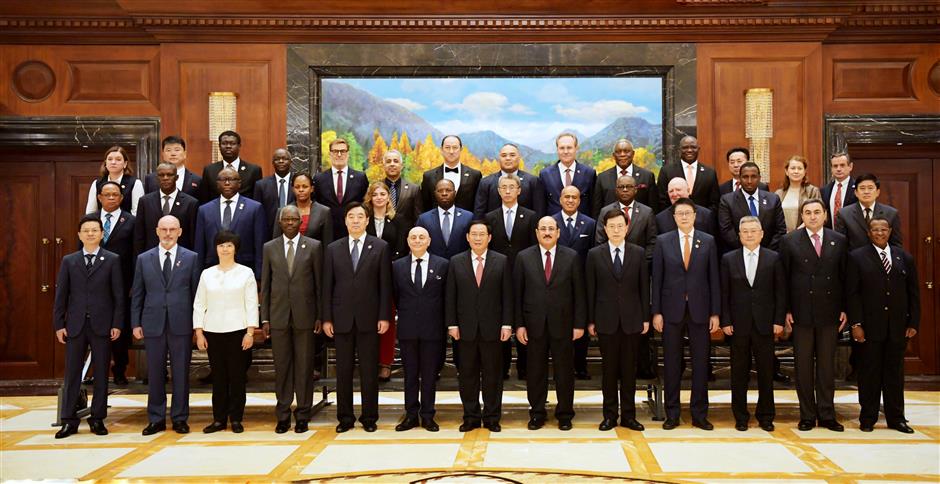 Shanghai Party Secretary Li Qiang, (center of front line), poses for a photo with a delegation of envoys of 31 countries to China on the afternoon of June 7.

Shanghai Party Secretary Li Qiang met with a delegation of envoys of 31 countries to China on the afternoon of June 7.

On behalf of the Communist Party of China Shanghai Committee and the municipal government, Li welcomed the envoys to Shanghai, and briefed them on the city's economic and social development, and coronavirus pandemic prevention and control.

This year marks the 100th anniversary of the founding of the Communist Party of China. Shanghai, as the birthplace and origin of the CPC, is a window for the world to observe China, a hub for China to link with the world, and a place where it continues to create miracles, Li said.

"At present, we are implementing the spirit of the important instructions given by Xi Jinping during his inspection in Shanghai, and speeding up the construction of the 'five centers' and a modern socialist international metropolis with world influence," he added.

Li said that China's efforts to promote a higher level of opening up to the outside world will not stop, and Shanghai's actions to strengthen international cooperation are unwavering. "We attach great importance to friendly exchanges with cities and regions around the world, and hope to take this visit of the envoys as an opportunity to further promote the practical cooperation between Shanghai and other countries in the fields of economy, trade, industry, education and humanities to a new level."

Syrian ambassador to China Imad Moustapha and South African ambassador to China SC Cwele warmly congratulated Li on the 100th anniversary of the founding of the CPC on behalf of the envoys in China, and said that during their visit to Shanghai, the birthplace of the CPC, they fully felt the prosperity of the glorious city and the people's happy life, and had a deeper understanding of the earth-shaking changes that have taken place in China and Shanghai under the strong leadership of the CPC.

The Special Envoy of the Chinese Government on Middle East issues Zhai Jun attended the meeting and delivered a speech.