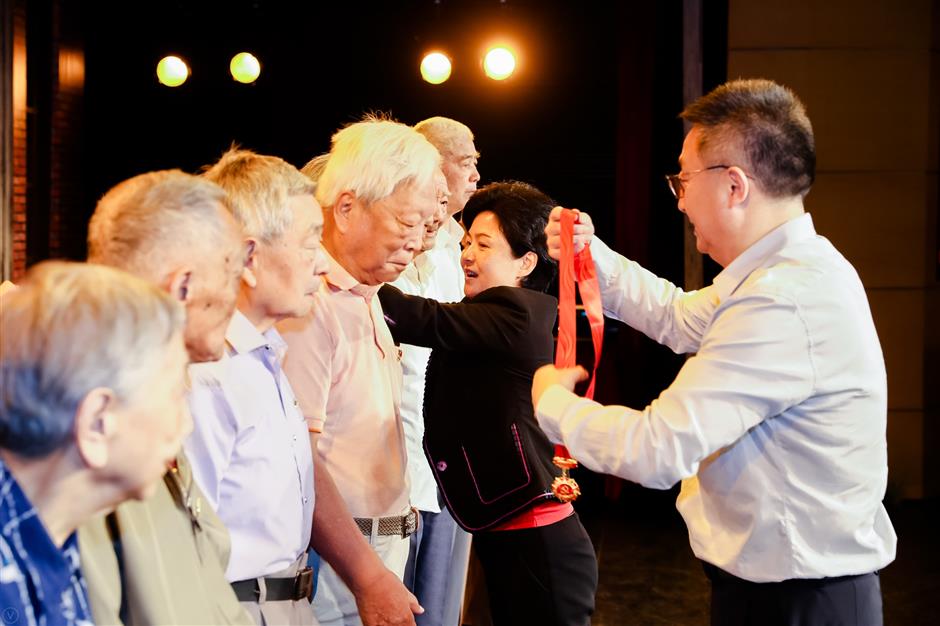 Senior Party members, including retired cadres, army officials and entrepreneurs, have been invited to share their life stories with children in Changning District to mark the centennial of the Communist Party of China.

Senior members with more than five decades of Party membership will give lectures, introduce the Party's history and talk with local youth to inspire the younger generation to inherit the merits of their predecessors.

The first of the series of events was held on Tuesday at the Changning District Children's Palace on Yuyuan Road.

Xu Meng, 98, who joined the Party 82 years ago, is the oldest Party member living in Changning. She joined the New Fourth Army in 1941, and served as a key city official after the liberation of Shanghai in 1949. She was later appointed as the deputy Party secretary of Changning.

Li Renjie, former Party chief of Changning, asked young people to contribute to the homeland and its people and live meaningful lives of their own.

Li has given 344 voluntary lectures since 2005 to nearly 50,000 people, mainly young people in Changning.

Wang Jingwen, a former official with the renowned "Good Eighth Company on Nanjing Road" of the People's Liberation Army, shared stories about the company, which was based on Yuyuan Road.

Wang Zhenghua, founder and chairman of Spring Group, who joined the Party half a century ago, is known for his cost control. He started his tourism business in a tiny 2-square-meter iron pavilion near Zhongshan Park in 1981.

More than 7,000 senior Party members living in Changning joined the Party over five decades ago. On Tuesday, Changning began presenting commemorative medals to all of them.

"They've dedicated their lives to the nation's different periods of development. They are now invited to share Party stories and inspire young people," said Wang Lan, Party secretary of Changning.

The event is part of a national campaign to award commemorative medals to CPC members with five decades of Party membership.

The awarding of medals, set to last until July 1, will see more than 7.1 million CPC members across the country honored.

The medals measure 50 millimeters in diameter, and are made of a copper-zinc alloy in hues of red and gold.