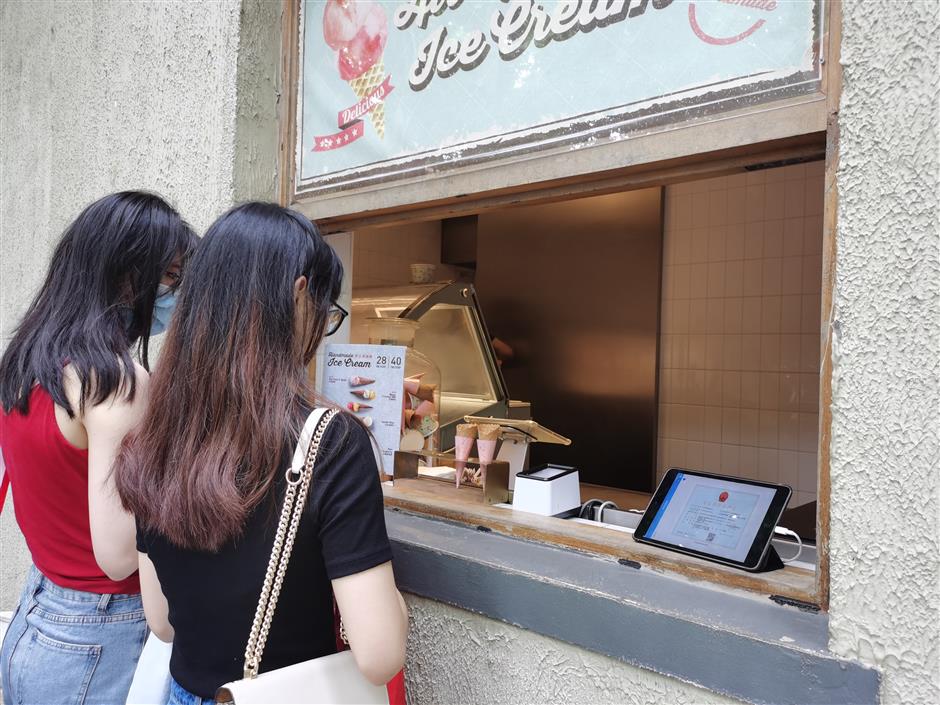 An ice cream shop's license information can be seen on an iPad.

City restaurants and shops can display e-versions of their business and food licenses to replace paper copies as the city moves toward a better business environment, local market regulators announced on Wednesday.

The e-versions, which can be shown on any kind of screen, have the same legal power as physical licenses, the Shanghai Administration for Market Regulation said.

Authorities began to issue e-versions of licenses in April last year due to the coronavirus pandemic, enabling companies to sign contracts and conduct business operations online and apply for services such as publishing annual reports, handling tax affairs and employees' social insurance online with e-licenses and seals.

By the end of May, 574,000 businesses in the city had these government services handled via e-licenses and seals, according to the administration.

From August, companies in Shanghai can open bank accounts with their e-licenses and seals at 131 outlets of the Bank of Communications.

Under Shanghai's food safety regulations, businesses are required to show licensing information in paper versions at an obvious place inside their venues.

However, an increasing number of new types of businesses are expecting a change to the traditional way of showing their licenses, the administration said.

The "bear claw" cafe in Xuhui District once came under fire for failing to show licenses due to its operating method.

Customers scan a QR code on a wall to place a coffee order. A takeaway cup is then delivered by a furry brown bear claw from a hole in the wall.

The paperless approach is expected to be expanded to more areas such as wine sales, the administration said.