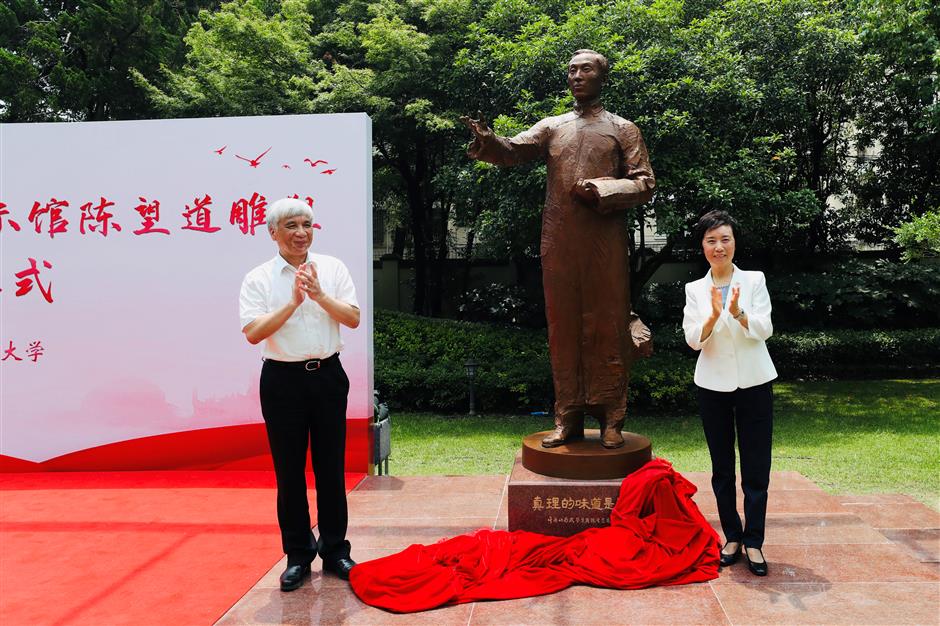 A statue of Chen Wangdao, the first Chinese to translate the full text of the "Communist Manifesto" into Chinese and former president of Fudan University, was unveiled on Friday at his former residence in Shanghai.

The home is now a permanent exhibition hall for the masterpiece.

The statue in front of the exhibition hall was designed and created by famous Chinese sculptor Wu Weishan at the invitation of the China Democratic League and donated to Fudan University.

Chen joined the league in 1951 and had been vice president of the China Democratic League Central Committee and chief of its Shanghai Committee.

The sculpture was unveiled by Ding Zhongli, president of the China Democratic League Central Committee, and Jiao Yang, Party Secretary of Fudan.

Wu visited the residence and checked many photos of Chen to design his latest work, which is based on a picture of Chen giving a lesson at a night school for workers.

The statue depicts Chen in a Cheongsam, with a book in his left hand and his right hand stretching out, explaining Communism to visitors.

There is a line on the base: The truth tastes sweet.

Xu Ningsheng, president of Fudan, thanked the league and the devotion of Wu in creating the statue.

"By unveiling the statue at the residence of Chen and taste the sweetness of truth, we can better carry on the spirit of the Manifesto and the story of Chen to learn from his patriotism and faith in seeking truth and draw strength from him to strive for a better future in the new era," he said.

Zhang Ping, vice president of the China Democratic League Central Committee, said the statue was not only a tribute paid to Chen, but also a landmark to inspire people to carry on his lifelong faith in Marxism and ideals in tireless dedication in education and academic research, as well as his utter devotion in promoting multiparty cooperation and course of the league.

"The China Democratic League will adhere to his faith and morals to make persistent efforts under the leadership of the Communist Party of China to contribute our strength to the building of a modern socialist country and rejuvenation of the great nation," he said.

Chen Qun, Shanghai's vice mayor and vice president of the China Democratic League Central Committee who chaired the statue unveiling ceremony, said Chen Wangdao's spirit is a treasure of the league and the university.

"We have to carry forward his spirit to stand firm in our belief and mission to make more contributions to prosperity and rejuvenation of the nation and well-being of the people," he said.