Two Shanghai students won the 2021 Covestro Cup iDEALShanghai English Essay Competition with their creative ideas about how to reduce plastic waste and protect the environment.

The competition, sponsored by the China arm of German-based polymer producer Covestro, was organized by Shanghai Daily under the theme "Shaping the Future, Waste to Value." It awarded prizes in two categories – one for students aged 7 to 12; the other for those aged 13 to 17. 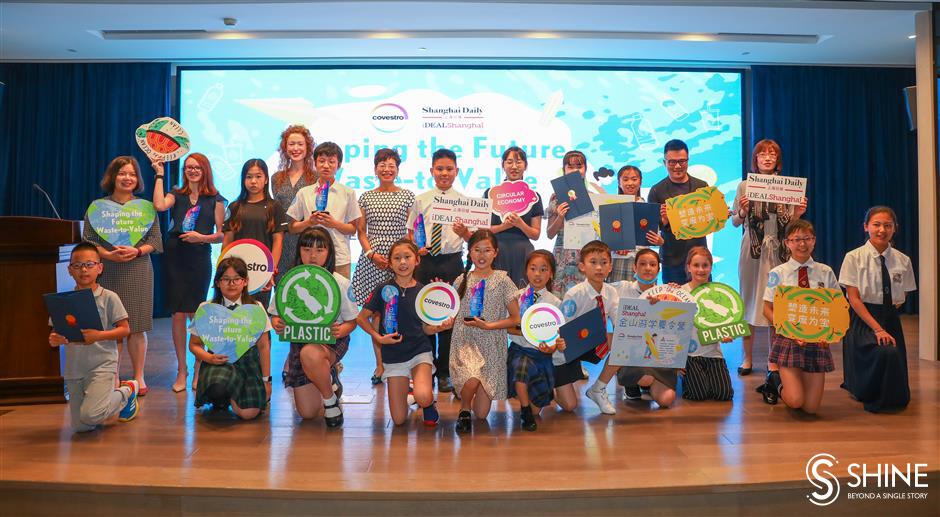 Judges and competitors pose for a group photo after the competition.

Zhou Zijun, 14, a student at Shanghai Hong Qiao International School, won the top prize in his age category for the design idea of a machine to soften and melt thermoplastic products and then dissolve or grind them into 3D-printing materials. The installation would function as a 3D printer when connected with a computer.

Zhou said he was very interested in the competition after his teacher told him about it.

"I wanted to dive into this topic," he said. "I've been wanting to do something for the environment for a long time, but I didn't until this opportunity presented itself."

He said he spent five hours researching and writing the essay and two days working on the video required in the second round of the competition.

"For many years, I understood the need to recycle," he said. "But I thought that just meant carting plastics to a recycling factory. Then I found out it was not quite so easy, so I studied the more complicated details of the process. There is still so much we have to do in the future to make it really work."

The award winner in the younger category was Fandy Zhu, 8, who attends Huili School. Her essay proposed three ideas: say no to single-use plastics, recycle plastics whenever possible, and use biodegradable materials to make plastics. She also suggested a reclassification of plastic waste. 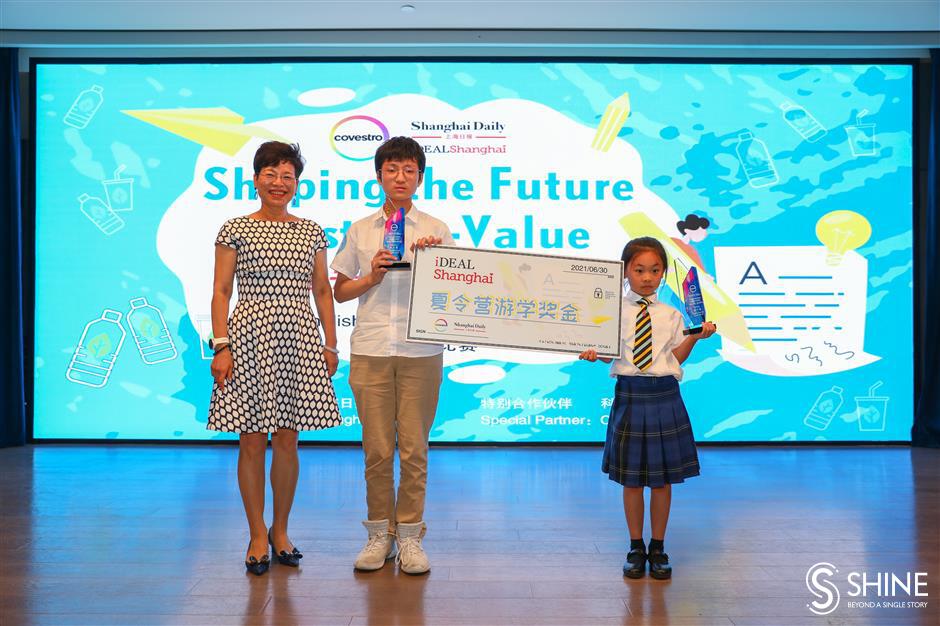 The contest attracted more than 1,600 students from about 100 Chinese and international schools in Shanghai. In the first round they had to submit an essay on one of three topics: reducing or ending plastic waste; designing an installation or ecosystem to promote recycling of plastics; or minimizing litter, especially in oceans.

The contestants submitted videos of themselves speaking on their chosen topics in the second round. The videos were viewed by some 50,000 people online, who selected 10 finalists in each age category.

Finalists presented their ideas and answered questions from judges on Wednesday.

The winners receive a personal audience with the president of Covestro China and a free family trip to the company's labs and factory.

Other finalists won prizes of between 500 yuan (US$72) and 1,000 yuan. Winners' essays will be published in Shanghai Daily.

The judges said they were impressed by the students and the depth of their presentations on such serious topics.

"Although they are very young, I'm very impressed by what they have put together," said Holly Lei, president of Covestro China.

The contest sponsorship continues the company's tradition of trying to help young people understand science and the world challenges of creating a sustainable environment.

"It takes generations to solve the problem," she said. "The competition gives us an opportunity to let youngsters know there are problems and there are also solutions that depend on many people. For us, young people are very important in that process."

The ideas of the student contestants are inspiring, she said.

"Young people are beginning to think about solutions," Lei noted. "When they say, 'I will start with myself, even if it's a small step,' that is very important."

"In recent years, sustainable development and recycling economy are the hottest topics all over the world," she told the young competitors. "Shanghai Daily as a major English-language media is sparing no efforts in this campaign. We hope through your voices, ideas and efforts, more people will join this 'green family.' Only with people like you, the younger generation, will the world become a better place."

Covestro produces premium polymers used in areas such as automotive manufacturing, electronics, coatings, adhesives, thermal insulation and footwear. The company was the material sciences division of German multinational Bayer until it was spun off in 2015. Bayer invented polyurethane and polycarbonate – materials that have come to underpin modern life.

In May 2020, Covestro announced its new vision to "become fully circular."

"We basically talk about how we can, in our business life, be fully circular in terms of raw materials, energy and joint solutions, and how we can innovate recycling," Lei said. "How do we turn waste into useful raw materials?"

She explained that the company believes plastic materials now existing in the world can have a second life through recycling, and Covestro is working with governments, institutions and the whole of society to find out solutions to the challenge.

"The challenge is not only for one company, or for one industry, or even for one market or one country," she said. "It's a challenge for the whole world."

Feng Yuli, associate professor of English at Fudan University who served on the judging panel, said the contest was rewarding for students not only in improving their language skills but also in showing awareness of environmental sustainability. 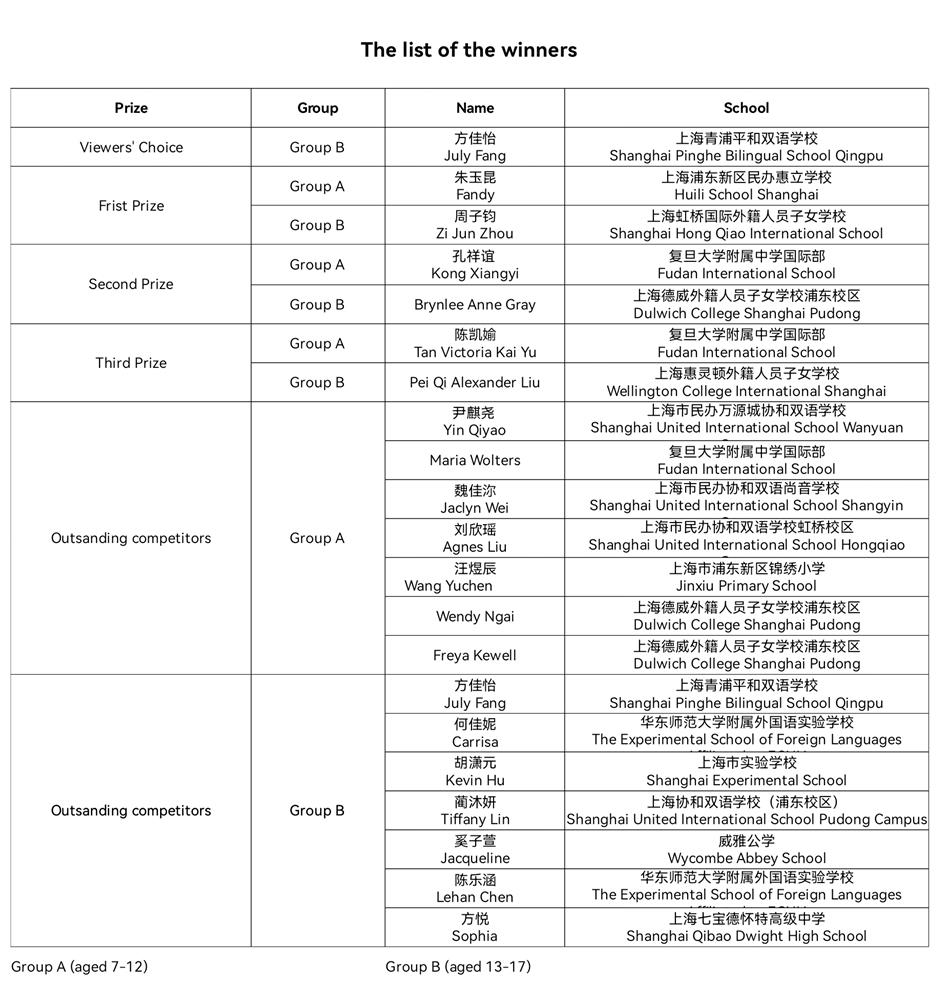